This is why you’re not a Tour de France racer

What is actually holding you back from Tour de France greatness? Dave and Jamie signed Liam up to find out
by Jamie Williams

Ever wondered what is holding you back from a professional contract? Dave and Jamie decided that Liam should be subjected to a number of tests to find out why the average rider is being held back. Is there just one thing stopping you, or is it something major that just can’t be fixed?

With Liam willing* and able**, they headed up to the University of Bath where they met Lead Applied Exercise Physiologist Jonathan Robinson to find out what was in store.

The first test of the day was the one that Liam was dreading. His height and weight were recorded and his skinfold measurements taken. Had a life of snacks been hindering him all this time? Would he have to switch to a fad diet to make it as a bike racer? We’ll get to the results later but these tests are one of the benefits of lab testing. Should you be embarking on a training plan, then these figures can be used as a baseline against which you can measure progress. 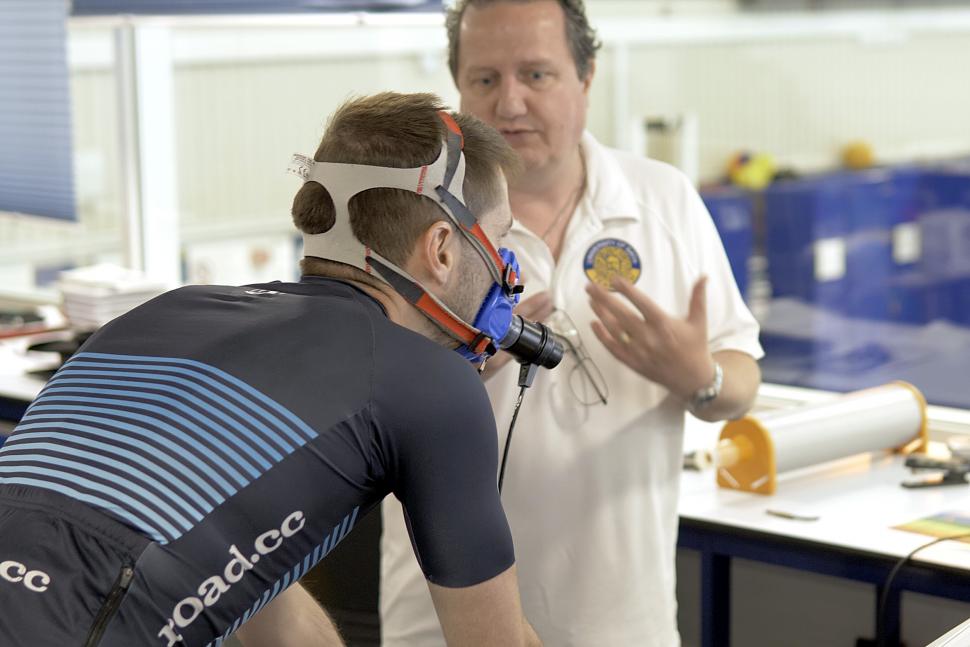 Next up, lung function was measured to check for any underlying respiratory issues and then the main test of the day could begin. A VO2 Max test is something that you can do quite easily at home on an indoor trainer, but coming to the lab allows blood lactate to be measured along with oxygen consumption, giving a much fuller picture of a rider’s strengths and weaknesses. With that additional information, it is possible for a coach to assign a far more specific training plan than by simply using a power profile.

This test will set out Liam’s Lactate Threshold, his Individual Anaerobic Threshold (equivalent to FTP) and finally his VO2 Max.

The Lactate threshold is described as the first significant rise of blood lactate above the recorded baseline levels. It is one of the key determinants for any long-distance athlete and becomes more important as the distance that you ride/compete over increases. 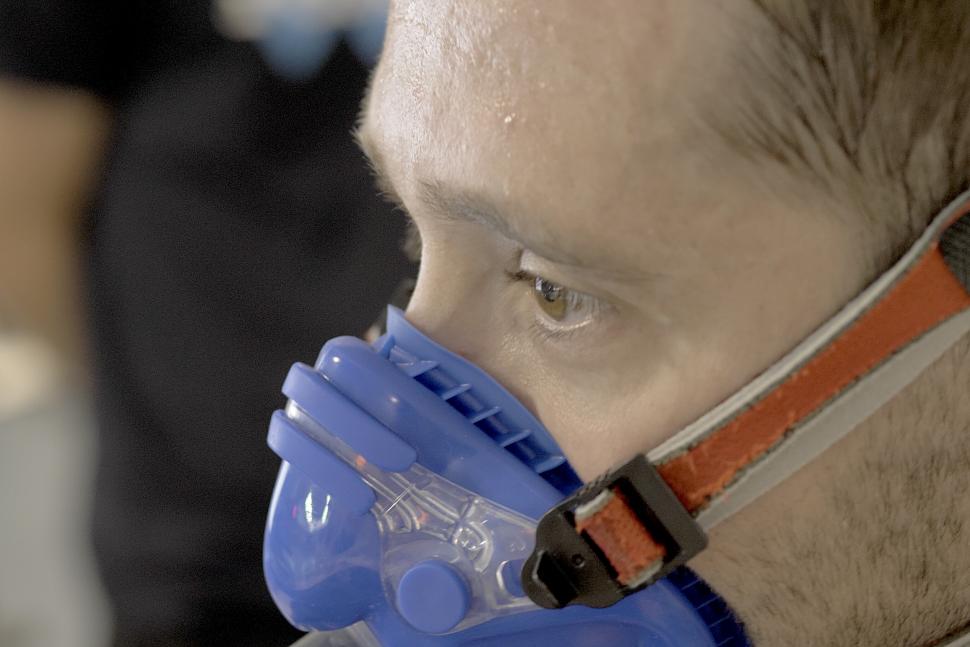 The Individual Anaerobic Threshold is the second lactate-based threshold and indicates the speed above which lactate starts to build up significantly within the body, indicating the depth of endurance capacity developed. The individual anaerobic threshold power is one of the primary causes of fatigue during shorter endurance events (45 -60 mins) and thus by delaying its occurrence you will be able to perform at a higher intensity before you become terminally fatigued.

The VO2 Max figure functionally represents the maximum amount of oxygen that can be removed from circulating blood and used by the working tissues during a specified period.

The final test focused on leg strength and was designed not only to measure how strong those chiselled guns are but more importantly to highlight any imbalances that might lead to injury. 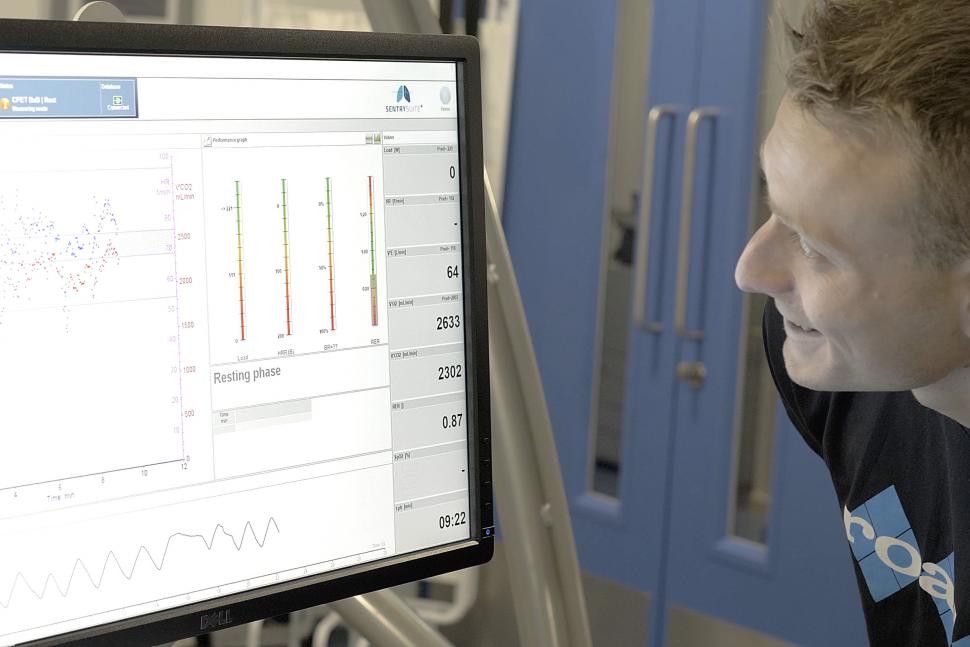 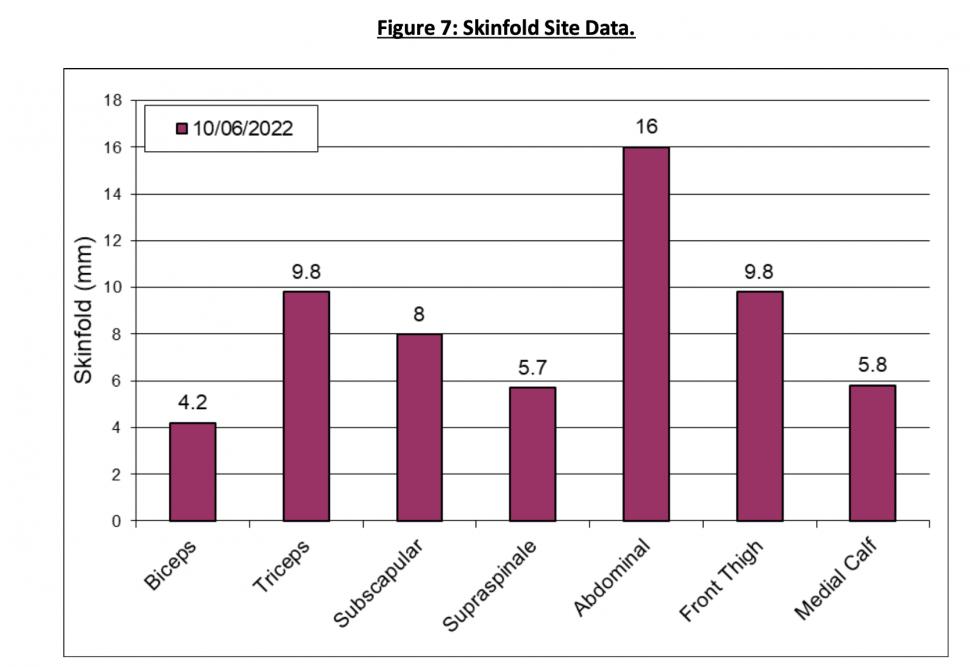 Despite choosing a life of cookies and pastries, Liam is currently sat at a BMI of 21.5 and a body fat of 10.43%. This, Jonathan says, is “ideal”, though he also points out that “with some more structured training you can reduce these scores quite easily and build additional muscle mass too that will be more effective in your endurance focus.”

When it comes to the pros, Jonathan says that an elite male rider can be as low as 5%. But before you start that crash diet, Jonathan points out that “for most people that is truly unobtainable.” Instead, he suggests that “between 10-15% would be ideal for a casual recreational cyclist in the general population. More serious riders and elite athletes will start to drop below 10% but that needs far greater training load and careful diet manipulation with potentially fewer cookies.” That rules Liam out.

When it comes to lung function, it’s good news for our Liam. He has the lung function of someone roughly 10 years his junior, so cycling is really rather good for you in this regard. 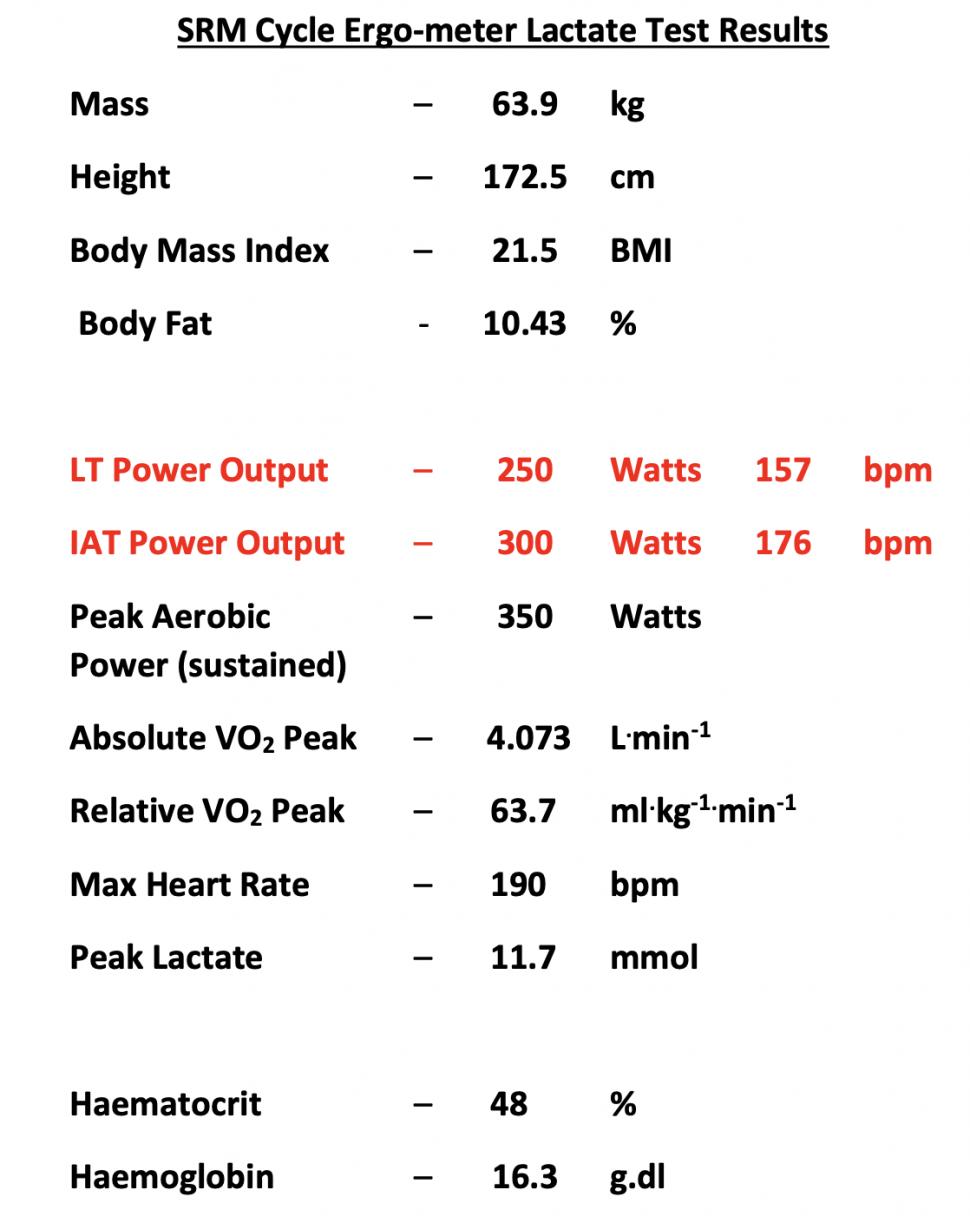 The VO2 Max and lactate threshold testing is the one that really helps you to set your training zones. Liam has a Lactate Threshold power of 250 watts, an Individual Anaerobic Threshold (equivalent to FTP) of 300 watts and a VO2 Max of 63.7 ml/kg/min.

Liam’s power output at VO2 Peak - 350 watts for 3 minutes - is the power output at which he elicited his peak oxygen uptake and reached terminal fatigue. This gives him a peak aerobic power to weight score of 5.47 watts per kg.

With a body weight of 64kg, this means that Liam isn’t half bad in terms of the general population, but when compared to the professionals, his figures could do with some work. 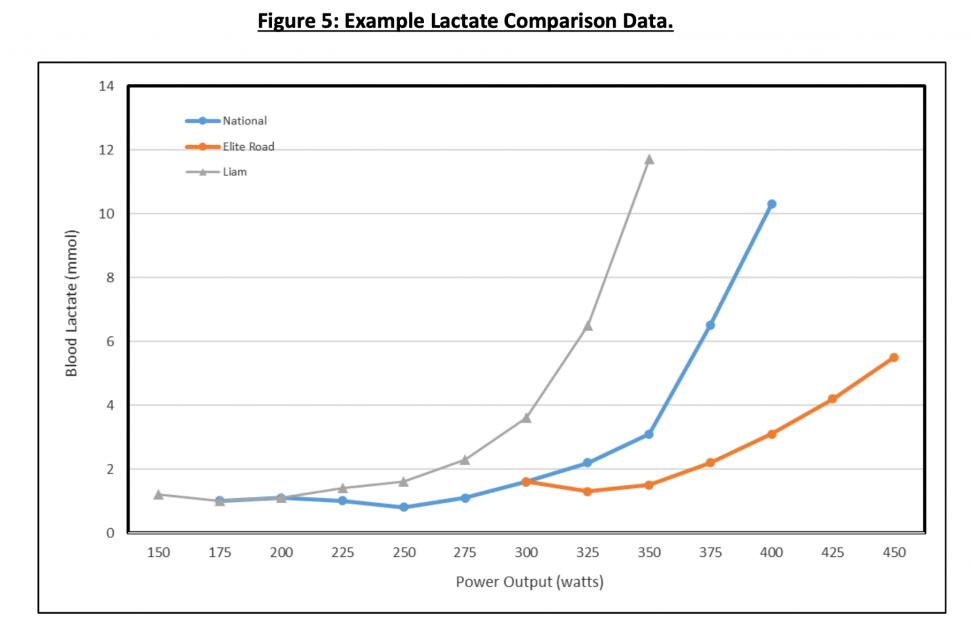 When we take a look at the above graph, it is clear to see just how much better an elite racer is, and just where it is all going wrong for Liam. Jonathan says that the elite road cyclist reported in the example data above has much lower peak lactate at max, that is because they are much more aerobic in their nature.

So at the point where Liam really starts to suffer, a Tour de France rider will be capable of putting out 125 watts more. They’ll also be able to hold that for longer and repeat the effort without needing to have a lie-down and a reviving cup of tea. 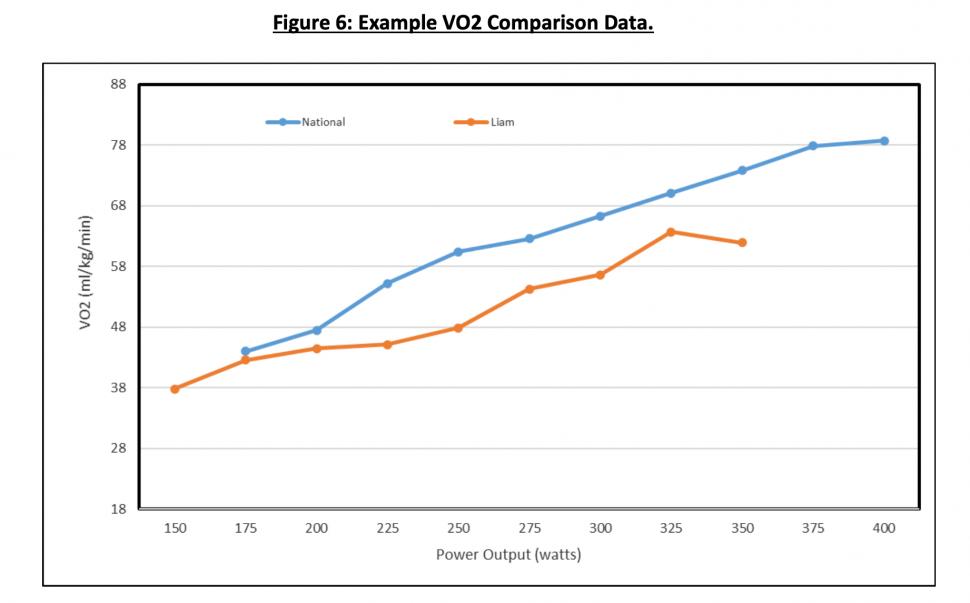 Nothing, however, puts a figure on the capabilities of world-class endurance athletes like VO2 Max. Liam’s score of 63.7 ml/kg/min puts him within the excellent category for his age and gender. But that just isn’t going to cut it in the Tour de France where most of the riders would register a value of over 75 ml/kg/min. And when you get to the top of the race, things get even worse for Liam. After winning the Tour de France, Chris Froome headed to a lab and registered a score of 84 ml/kg/min.

While VO2 Max figures are commonly quoted, it must be noted that it isn’t a golden ticket. Jonathan explains that a weaker score here can be compensated for with a strong lactate profile.

What you can change?

There is no magic formula to cover everyone in terms of how to get better on a bike, but Jonathan has provided Liam with some general advice on improving his figures. He is what he said: “The lactate threshold is one of the key points for any endurance performer and therefore focusing on the rightwards movement of this threshold is highly advisable. Prolonged work in Zone 1 and mainly in Zone 2 are the key areas to train for moving this threshold onwards to the right as plotted on the graphs.”

That means it is a lot of long and steady rides for Liam, not just over the winter, but throughout the year. 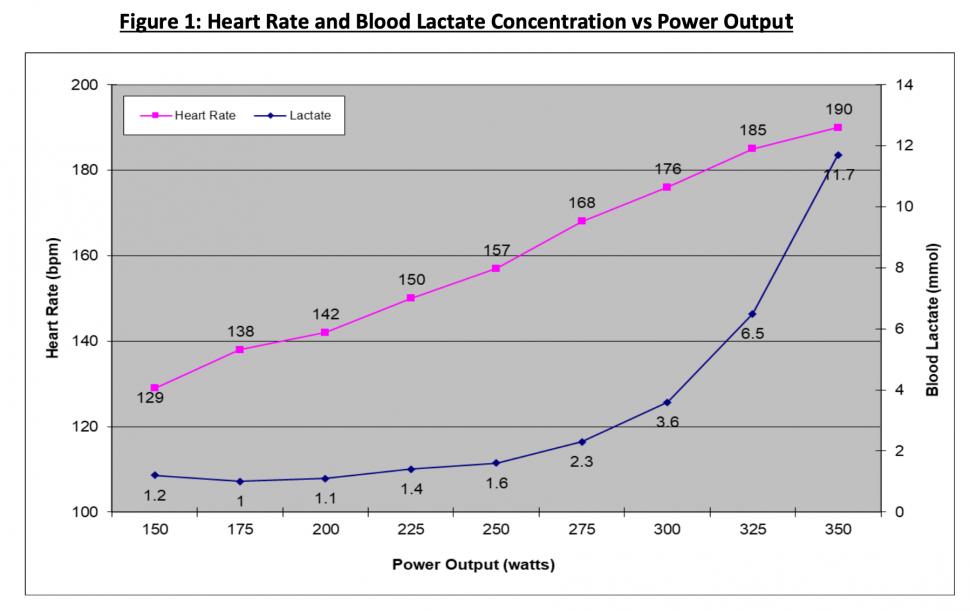 “Interval type work edging just into the Z4 and even Z5 zones, and then recovering into Z1 or Z2 will be key for developing your lactate tolerance. This will be applicable for your general fitness and the more specific interval training type work too.

“Over time (and dependent on your aims) some focused and sustained Zone 4 and even Zone 5 work will help to boost peak power output and your VO2 max, but you will always need to have done the relevant base work first.

> How to get the most from your limited training time

“Once the aerobic base is built/fine-tuned further, focused work across Zone 3 and to some extent later on in the Z4 zone will help to improve your lactate tolerance and more importantly help to move your IAT/LT2 further to the right.”

So, just a lot more training, a better diet, improved genetics and probably some better tactics are the only things standing between you and Tour de France glory. It might just be easier to stick to watching it, but if you fancy getting your training zones set with a high degree of accuracy, check out the Bath University testing options.