Monday moaning: Why don't cyclists stick to the left of the lane?

What does the law say about riding in the middle of the lane, and when is it appropriate?
by Mat Brett

Armchair experts, especially those on social media, will often tell you that cyclists should be positioned on the left side of the lane, never centrally, but what's the truth? Here's what you need to know to set the record straight.

We recently reported on road.cc that a Hove cyclist who suffered a close pass by a school bus was told that the driver thought she would have moved over – despite the fact that the space to her left was a parking bay. There's clearly some misunderstanding of correct road positioning out there.

The first port of call on matters like this is usually The Highway Code (remember that not all of the rules in The Highway Code are legal requirements), but it says nothing about how cyclists should position themselves within a lane apart from when dealing with junctions and parked vehicles.

Despite what some people would have you believe – spoiler alert: not everything written on social media is true – there's no rule that says cyclists should always be on the left-hand side of the lane (we'll talk about the related subject of riding two abreast in a separate feature, by the way).

One cause of confusion could be Rule 160, aimed at all riders and drivers rather than cyclists in particular: "Once moving you should keep to the left, unless road signs or markings indicate otherwise. The exceptions are when you want to overtake, turn right or pass parked vehicles or pedestrians in the road." 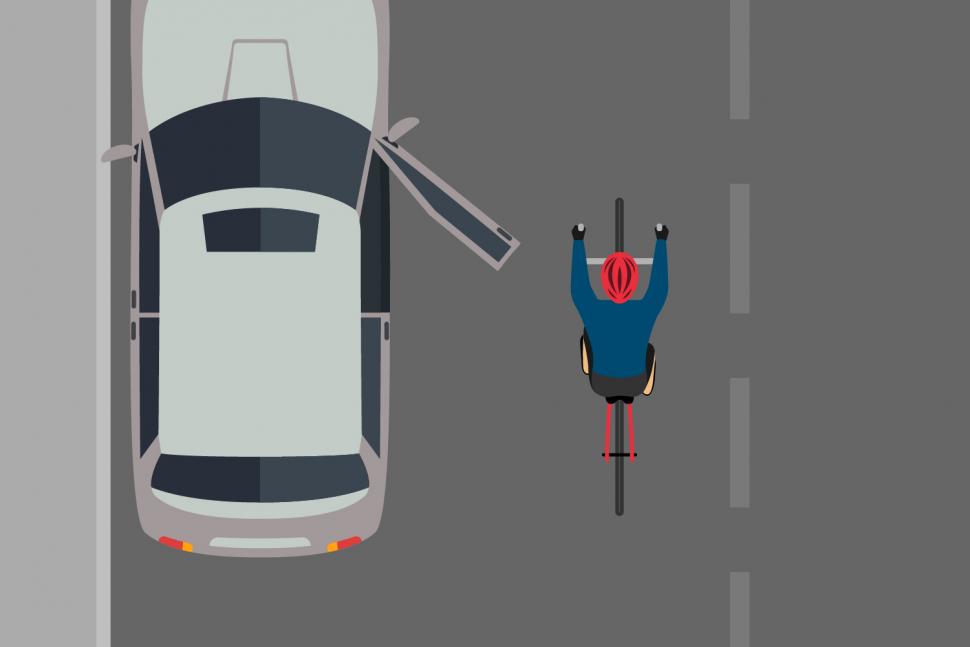 One other thing The Highway Code has to say about cyclists' lane positioning is Rule 67: you should "leave plenty of room when passing parked vehicles and watch out for doors being opened or pedestrians stepping into your path".

You need to be at least a door's width out when passing parked vehicles, and 1.5 metres is often recommended.

What about at other times?

RoSPA (Royal Society for the Prevention of Accidents) says, "Don’t ride in the gutter; there may be debris and grid covers, and it will encourage drivers to squeeze past you even if there isn’t enough room.

We all know that hugging the kerb means that when you do encounter a drain, broken glass or anything else lurking at the side of the road, your only means of avoiding it is to steer outwards – perhaps sharply – into traffic that's potentially passing at a speed much faster than you. That's clearly dangerous. Hugging the kerb also reduces your visibility to drivers coming out of side roads and drives.

Riding in the primary position, also known as 'taking the lane', is all about safety. John Franklin says that this is where you can best see and be seen, and are able to maintain the straightest and fastest course.

'Close pass' initiatives by police around the country promote safety by telling motorists to leave at least 1.5m of space when overtaking a cyclist, but you've doubtless experienced many coming by far closer than that. Riding in the primary position discourages this by forcing traffic behind you either to stay put or to overtake only when the opposite/adjacent lane is free. 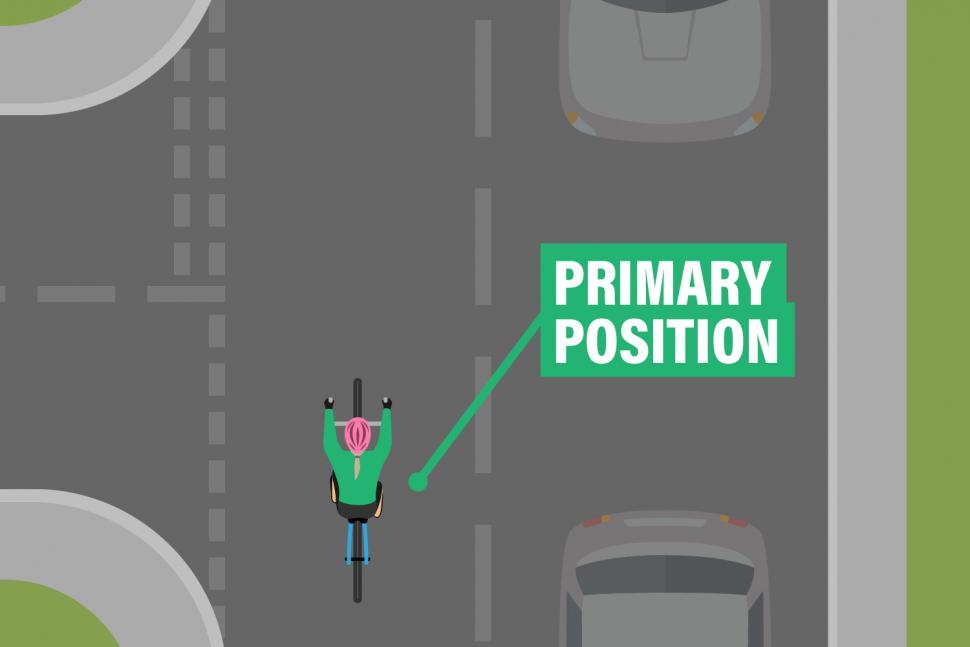 It's often best to take the lane before passing a side road joining from the left, for example – after looking over your shoulder to make sure that it's safe, of course, and signalling if you to need to communicate your intention to other road users.

Moving out increases your visibility to traffic at the junction, gives you more space to manoeuvre if the joining traffic edges out, and stops a vehicle squeezing by and turning left across your path at the last moment.

Similarly, the primary position can be best in slow and stationary traffic, when the road surface near the edge is poor, on narrow or winding roads, and through traffic calming schemes. You can also use it when approaching 'give way' signs, traffic lights, roundabouts, when turning at junctions, and in many other situations.

No one is suggesting that you ride in the primary position just to be awkward. Far from it.

"Because the primary riding position can result in some inconvenience to following drivers, it is reasonable to ride further to the left when this could help others, so long as your own safety is not thereby impaired,"says John Franklin (his emphasis). 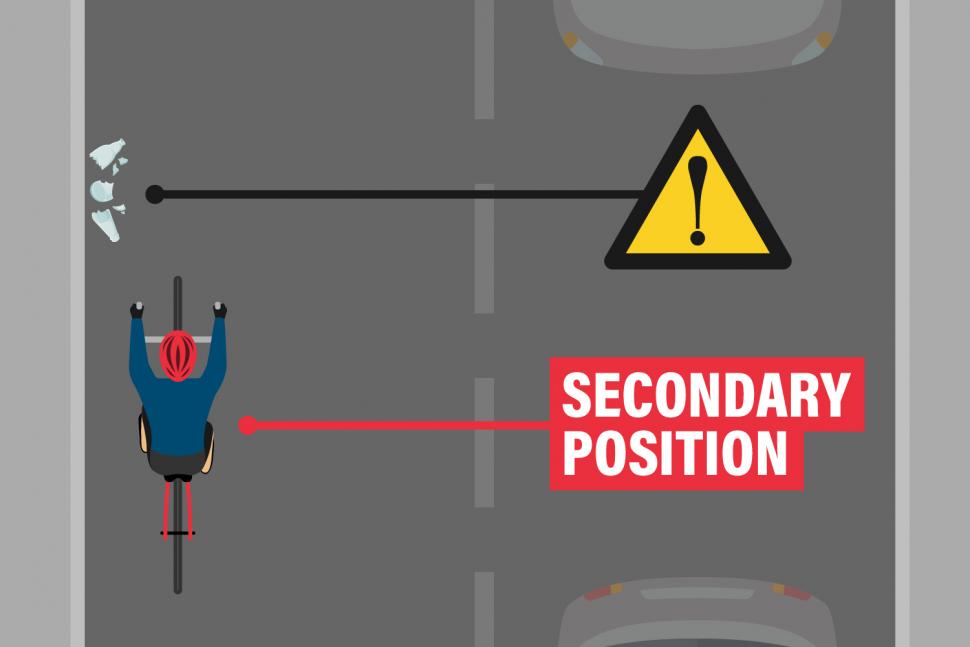 British Cycling says, "When riding in the primary position, [you] should travel at a reasonable speed, as part of the traffic flow. If, however, traffic is building up behind [you] and the road ahead is clear, [you] may wish to move to the secondary position to avoid obstructing other road-users unnecessarily.

"The secondary road position may be appropriate if the road is wide enough to allow safe overtaking, and the rider’s safety is not reduced by riding in this position." 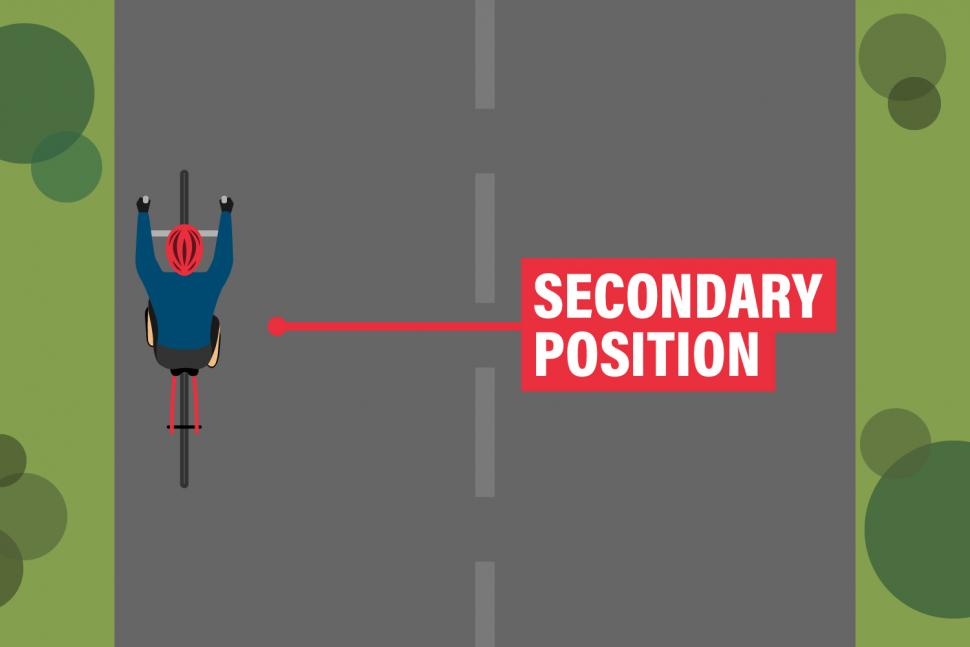 With that in mind, you might take up the secondary road position on minor roads where there are few parked vehicles, for example. However, the take-home points are that you're not obliged to position yourself to the left of your lane, riding in the primary riding position is the best option in many circumstances, and your safety trumps another road user's wish for you to shift to the side.

Matt Woodcock, Cycling UK Training Manager said, “Whether you’re new to cycling or an old hand, you’re hopefully familiar with the concept and importance of proper road positioning – and will probably have heard the terms ‘secondary’ or ‘primary position’ and will know that you shouldn’t hug the kerb.

“In the absence of decent cycling infrastructure across most British roads, proper road positioning is one of the most important things you can do to keep yourself safe while out cycling, but it can be a bit confusing to know where you should be at which point and sometimes counterintuitive, especially if you’re new to cycling.

"To help all road users understand cyclist road positioning, Cycling UK created two short films which show where and how cyclists should ride, especially in key areas like junctions, turnings and pinch points.”

The first one covers road positioning and junctions...

...while the second offers five tips to stay safe...