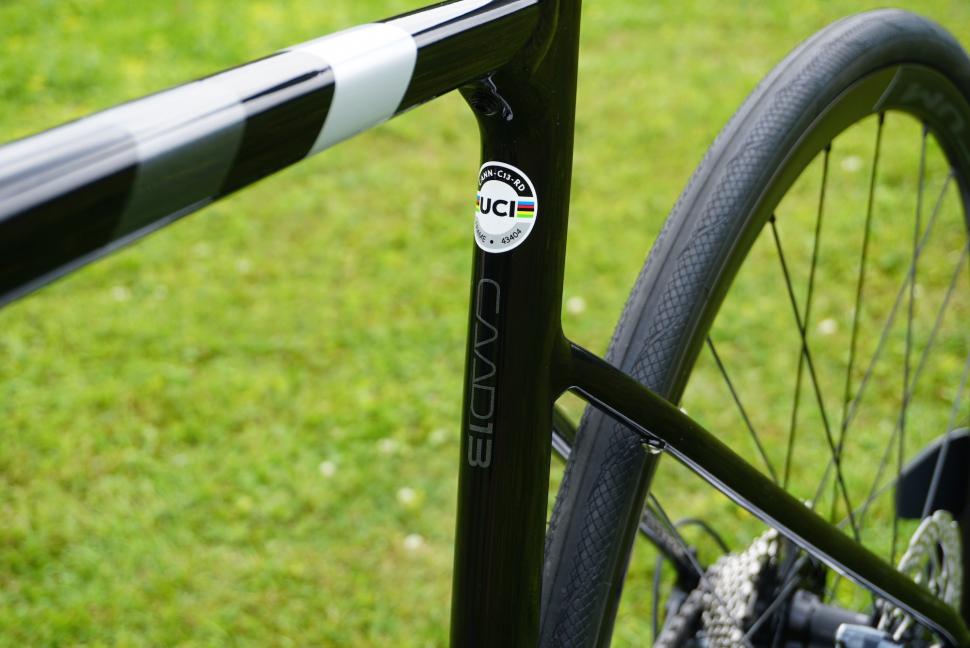 What are dropped seatstays good for? Should you get a bike with them?

Ever wondered why so many new bikes have dropped seat stays? Wonder no more…
by David Arthur @davearthur

Trends come and go in the bike world. One that won’t have escaped your notice is the dropped seat stay design. But why are all the bike companies at it?

Rewind the clock a couple of decades and all road bikes were made from skinny steel tubes with a double diamond design. Then along came Mike Burrows in the 1990s and, with Giant Bicycles, introduced the radical compact frame design dubbed TCR. Key to this design was a small rear triangle providing weight and stiffness benefits.

It took a long while for the design to be accepted but it has now influenced most modern bike designs. While it didn't have radically dropped seat stays like we're seeing today, it did lay the foundations.

We don't know who really started the trend for dropped seat stays, but Swiss brand BMC is often credited with doing it first on the ​Impec, a futuristic carbon frame designed and built by robots. BMC's main reason for dropping the rear stays was to provide more ride comfort with improved lateral stiffness. 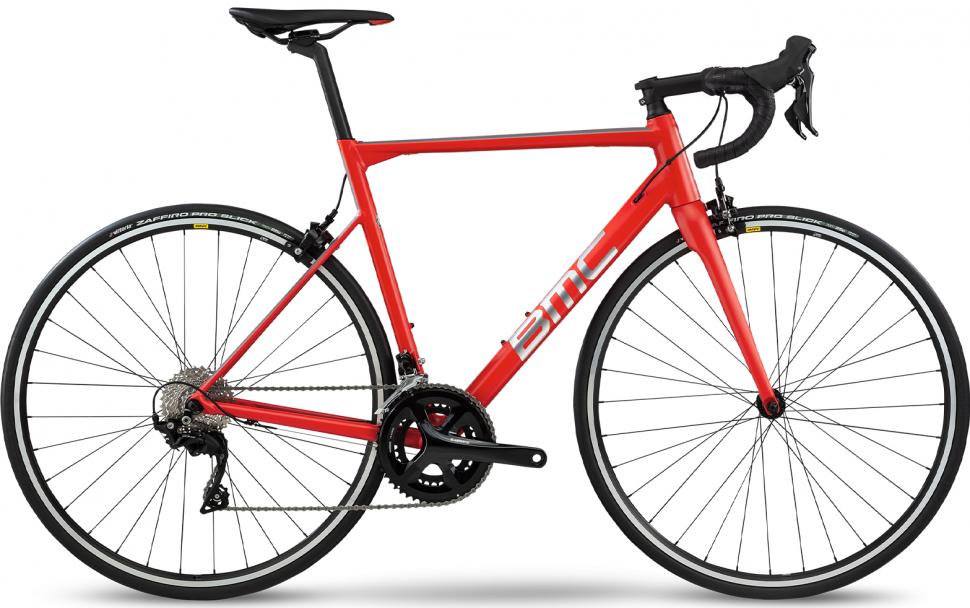 “On the impec as well a lower-slung seat stay and special flex zones in this area provide for the typical BMC mix of ride comfort with lateral stiffness and absolute handling precision. The low seat stay is a feature that you very quickly learn to value, especially on longer tours and the worst kinds of roads," explained BMC at the Impec launch. This design study has influenced all BMC road bikes since.

How popular is this trend?

We've been seeing a lot of new bikes launched this year with dropped seat stays, suggesting we're clearly in the midst of a new trend. We wanted to put some numbers on this increased popularity so partnered with 99 Spokes, a bike comparison website, to crunch some numbers. The results make for interesting viewing.

The data for 2020 model year bikes is not complete yet, but even allowing for that incomplete data set it's clear the number of bikes with dropped seat stays has only increased in popularity. It doesn't show any sign of replacing traditional seat stay designs just yet though.

"This has been an interesting trend to watch in recent years; particularly in that it’s not limited to a subset of cycling disciplines, but appears across a wide range from gravel to road racing. Also worth noting is the parallel trend towards disc brakes. Road bikes with dropped seat stays and rim brakes can be found, but we do see a much stronger correlation between dropped seat stays and disc brakes. Frame designers may be afforded greater flexibility in the positioning of the seat stays when they don’t need to accommodate a rear rim brake mount," commented Scott at 99Spokes.

Comfort is a key reason for lowering the seat stays on a road bike then. Road bikes have gotten incredibly light and stiff since the early days of carbon fibre development, probably to the point it’s going to take a major leap in material development for any more major gains in these areas.

But our roads aren’t getting any smoother, and so bike designers have started focusing on comfort. 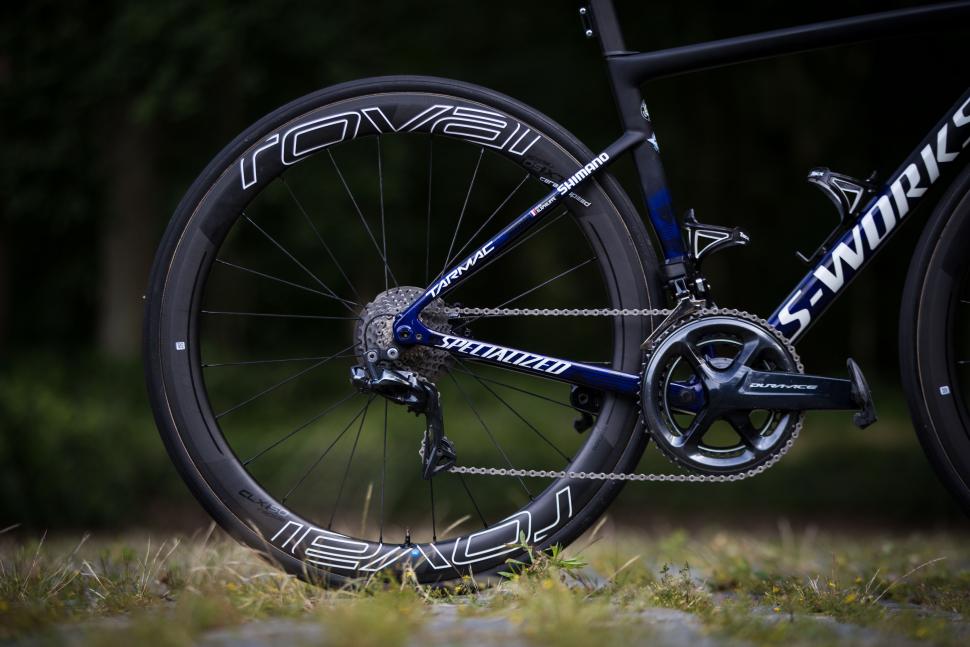 Along with increasing tyre clearance, frame design has been a key target for achieving more of compliance. That's the ability of the bike to cushion you, to an extent, from the vibrations and impacts generated when riding over rough roads.

There has been greater demand for bikes that combine the speed and performance of a pro race bike but are easier to live with on poorly surfaced and maintained roads. It’s given rise to the huge popularity of endurance road bikes. Bikes designed to be comfortable yet fast, stiff and light. 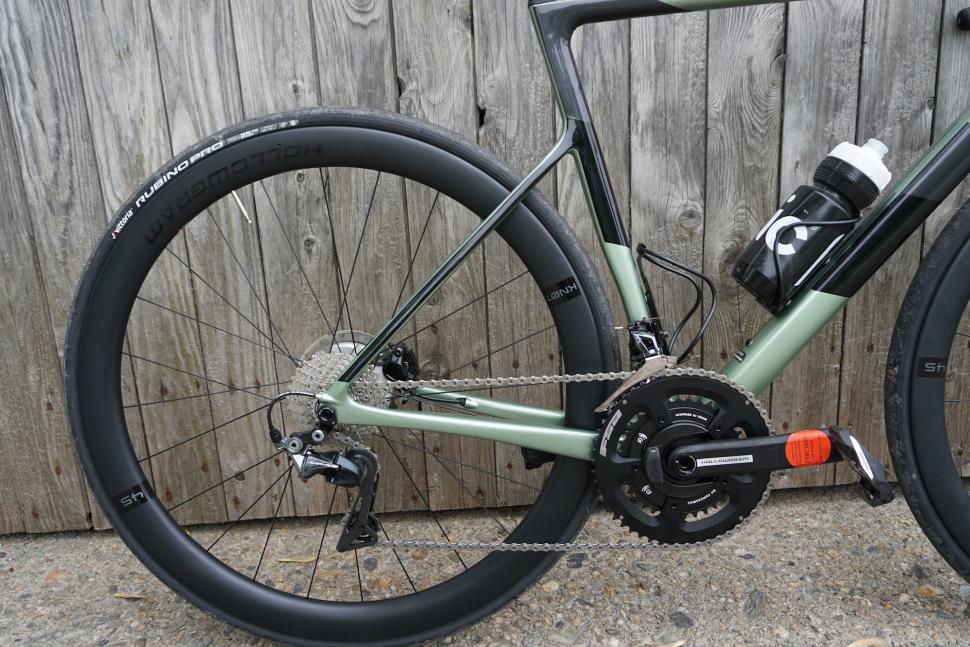 It’s not just endurance bikes that are getting this comfort focus. Even the latest race bikes from the big brands are going down the same route. There was some controversy when Cannondale unveiled its brand new SuperSix Evo, a bike that had held onto a traditional frame design, with dropped seat stays.

According to Cannondale, the new Evo bests the previous bike provides an 18% improvement in compliance compared to the previous model. That's not just down to the stays, but also the seat post and new internal seat clamp.

It's not all about comfort. Bike designers also claim aerodynamic improvements from the compact rear triangle​ created by the dropped rear stays. Dropped stays have become almost commonplace on aerodynamic, where they first appeared, to regular all-round road race bikes getting the same treatment.

Ribble’s Head of Product Design Jamie Burrow lists numerous benefits. "The benefits over a traditional rear triangle are: (1) more aerodynamic flow from stays to the rear wheel; (2) the seat tube offers seat post compliance for a more comfortable ride; (3) smaller triangles are stiffer, keeping the rear triangle stiffer and maintaining power transfer to the back wheel." 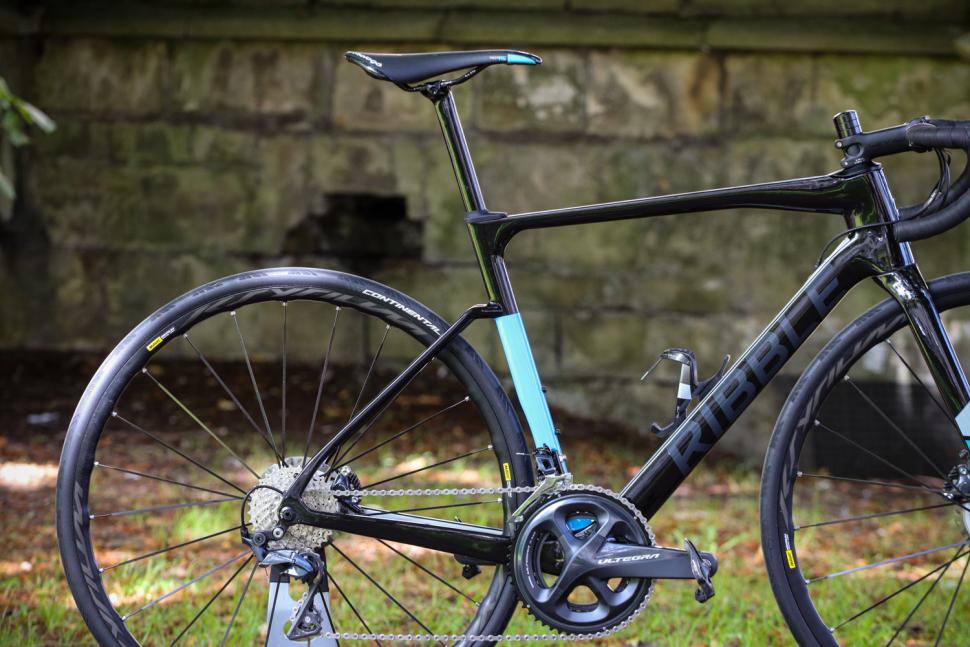 Colnago has resisted the trend, taking a more traditional approach to frame design, but that said it's latest aero road racer the V3RS has incorporated the dropped seat stays.  Colnago’s designer Davide Fumigalli says there are benefits to dropped stays, but adds that they’re not always the right solution.

“We started dropping the seat stay a few years ago with the K-zero (mainly for Aerodynamic purpose) and C-rs (comfort and side stiffness) but then we didn’t use this option for V2 and C64. It’s not the ultimate solution to anything, sometimes it works, sometimes not,” he explains.

"It’s always about what are you looking for…for this project [V3RS] we think the “slightly dropped” seat stay is the correct balance." 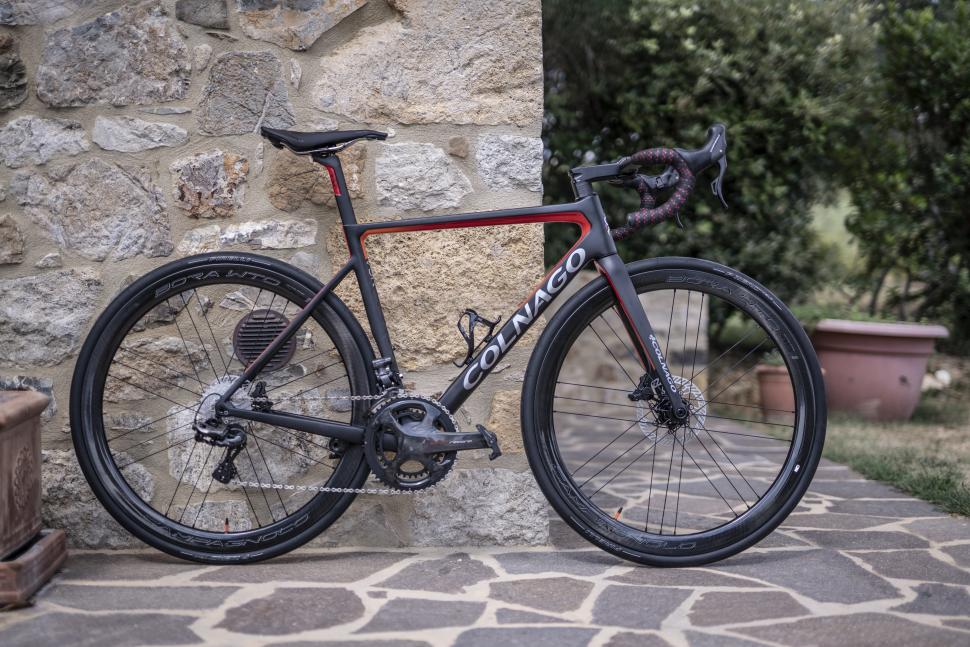 It's obviously creating bikes that look largely the same. And many people aren’t fans of the aesthetic of the dropped stays. But tradition has rarely stood in the way of technological progress in the cycling world, aside from the UCI rule book. And aero has become the biggest focus for many bike brands, especially those with demanding pros to cater for. 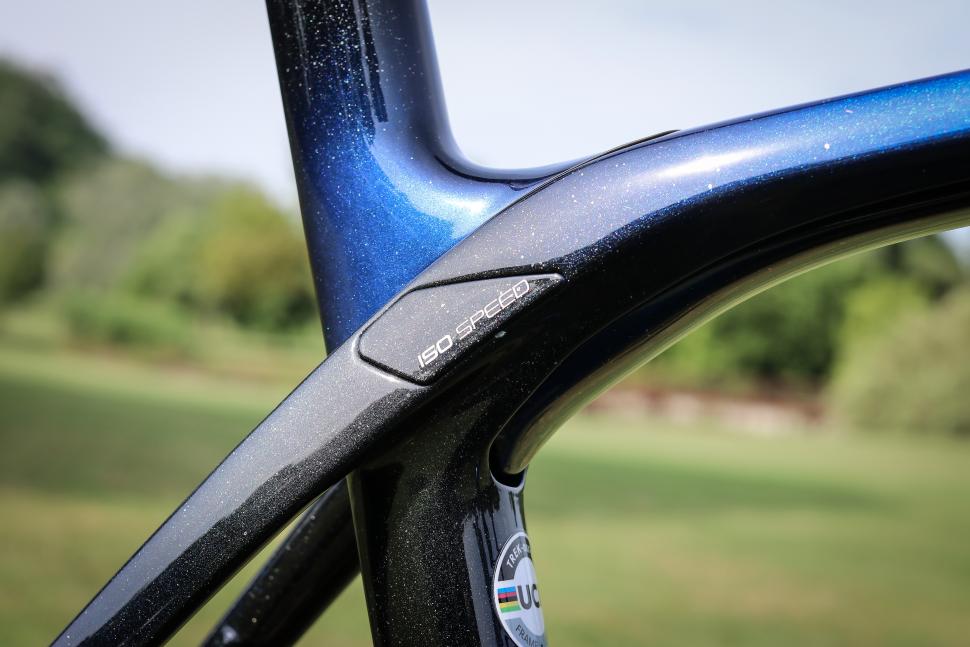 There is a limit to how much vertical compliance can be built into an otherwise stiff frame. No wonder some bike companies are looking at more radical solutions to meeting the demands of comfort and aerodynamics.

Trek's IsoSpeed negates the dropped seat stays for a clever design that decouplers the seat tube from the rest of the frame so it's free to flex back and forth. Cannondale has added pivots to its Topstone Carbon gravel bike along with dropped stays to increase the comfort. Specialized meanwhile drops a seat post into an oversized seat tube to increase the range of deflection.

Then, of course, there is the increased tyre size that nearly all new bikes are now capable of being fitted with. 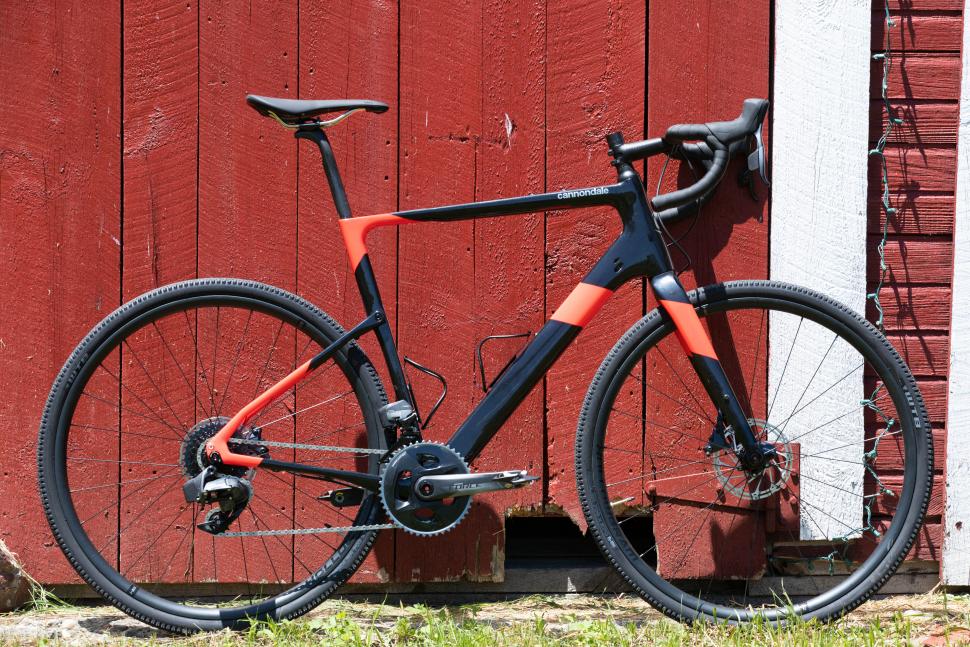 It's not just road bikes. Gravel, adventure and all-road bikes are taking it too another level. Cannondale’s Topstone Carbon is perhaps the ultimate expression of this idea. By placing a pivot bearing at the seat stay and seat tube junction, it aims to increase the degree of bending force at the seat tube to offer, in its words, up to 30mm of compliance.

But do drop seat stays really make a dint of difference? Here at road.cc, we’ve ridden hundreds of the latest bikes over the last decade, and performance, when measured across all metrics, has definitely improved. They feel faster, more efficient and more comfortable. But pinning all those improvements to the dropped seat stays is an impossible conclusion to draw.

In a market where the designers are chasing the same goals and limited by the same rule book, there are only so many avenues bike designers can explore. It seems the dropped seat stays achieves the desired increased comfort and less tangible aerodynamic improvement, and as a result, are here to stay.

Is it a bad thing or just another phase in the evolution of the road bike? Time to hand over you you so let us know what you think below.