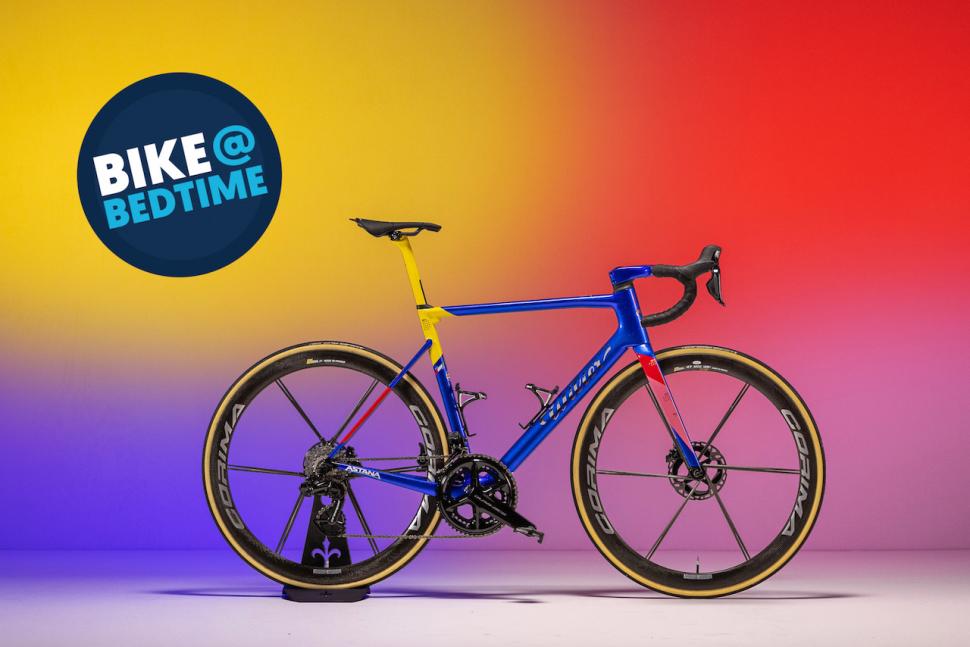 Vincenzo Nibali drew an end to his incredibly successful career at Il Lombardia on Saturday riding this Wilier 0 SLR with a finish that celebrates his major achievements. 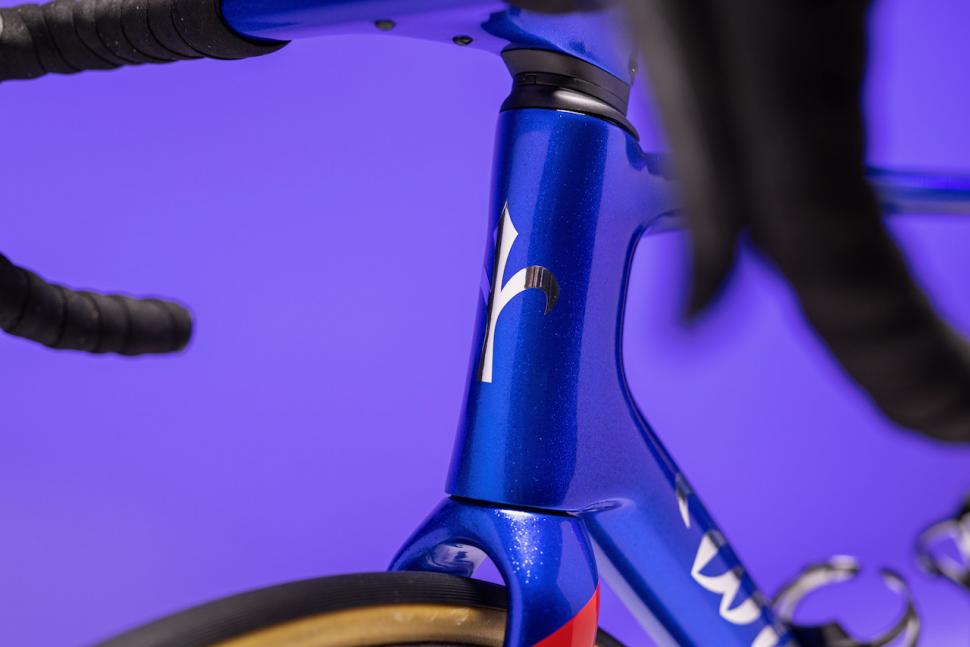 He is one of only seven riders in history to have won all three Grand Tours. To save you Googling, the others are Jacques Anquetil, Felice Gimondi, Eddy Merckx, Bernard Hinault, Alberto Contador, and Chris Froome. That’s some exalted company. 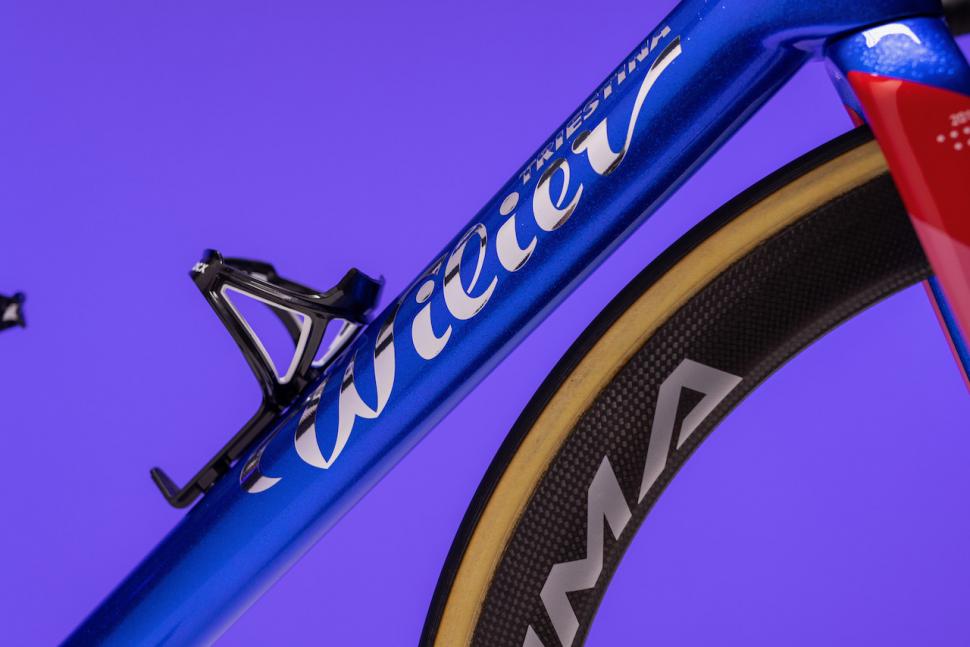 Prior to the race he said, “Of course, I’m aware that the Giro di Lombardia 2022 is my last race. Nevertheless, the only thing I’m concerned about right now is being in the best condition to honour – as you should – a classic Monument race. But there’s no denying that I’m also thinking about the day after. I know that I’ll be passing over the Ghisallo for the last time and I can even see the last look I’ll be giving to my bike when I cross the finish line in Como. My last bike as a professional racer.”

Nibali rode a Wilier 0 SLR in a special finish for his final race.

“The bespoke paintwork of the Wilier 0 SLR created especially for the occasion features all the colours and numbers of his career: blue, which is the colour of the endless affection of his fan club in Messina [Sicily]; yellow, like the coveted jersey that everyone – since the 1919 edition of the Tour de France – longs to wear; pink and red, symbols of the Giro d’Italia and the Vuelta a España,” said Wilier. 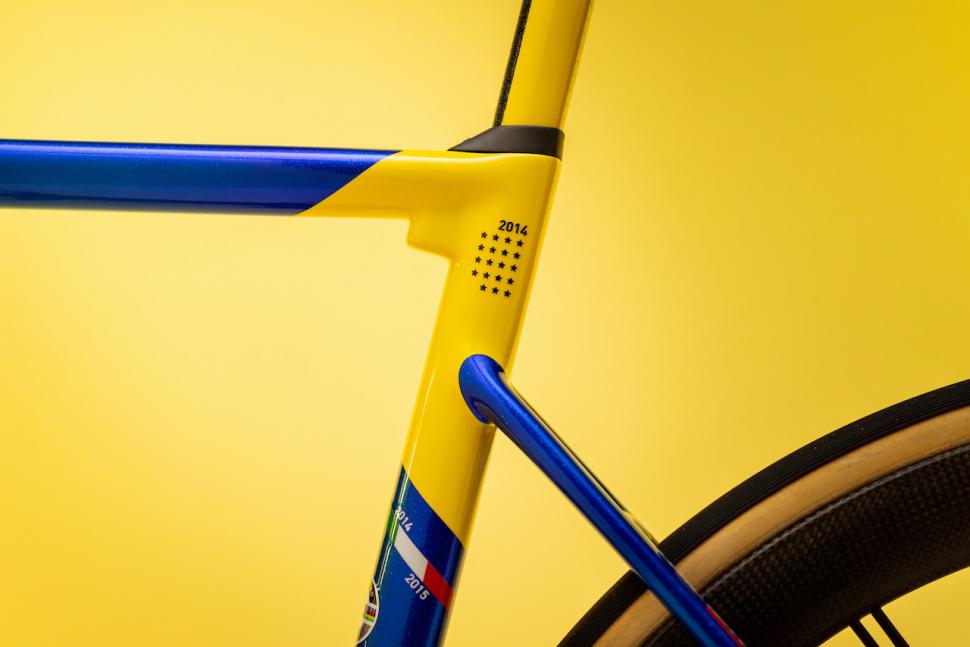 “If you look closely, you will even be able to see the many stars, one for each day that Vincenzo has worn the symbol of the title in the Grand Tours.”

For example, 19 stars on a yellow background at the top of the seat tube indicate the number of days that Nibali led the 2014 Tour de France – all but two of them. It was a dominant performance that year. 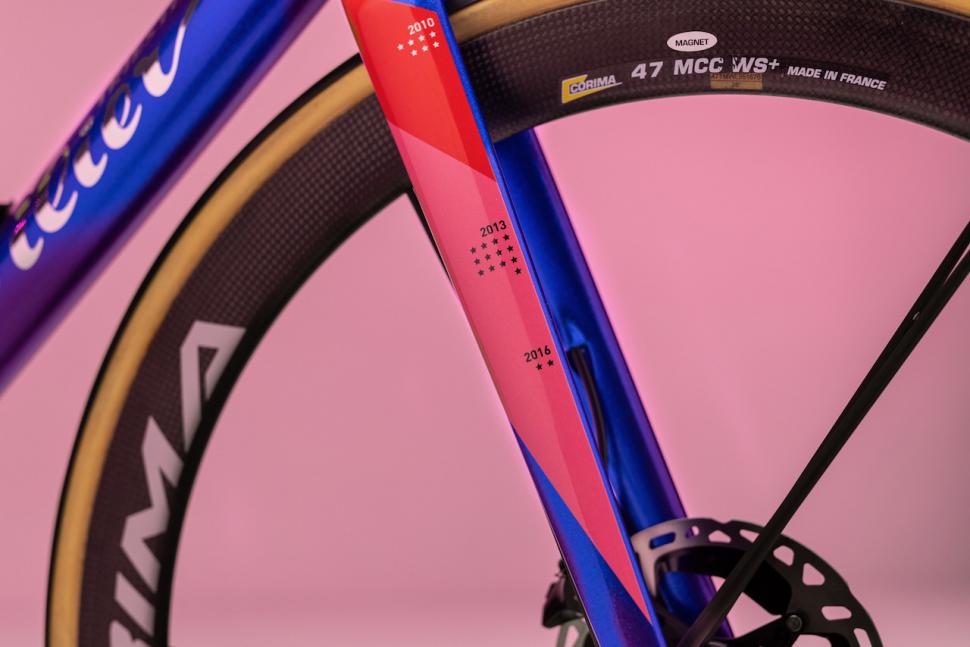 In contrast, you can see from the fork that he led the Giro d’Italia for just two days when he claimed victory in 2016. 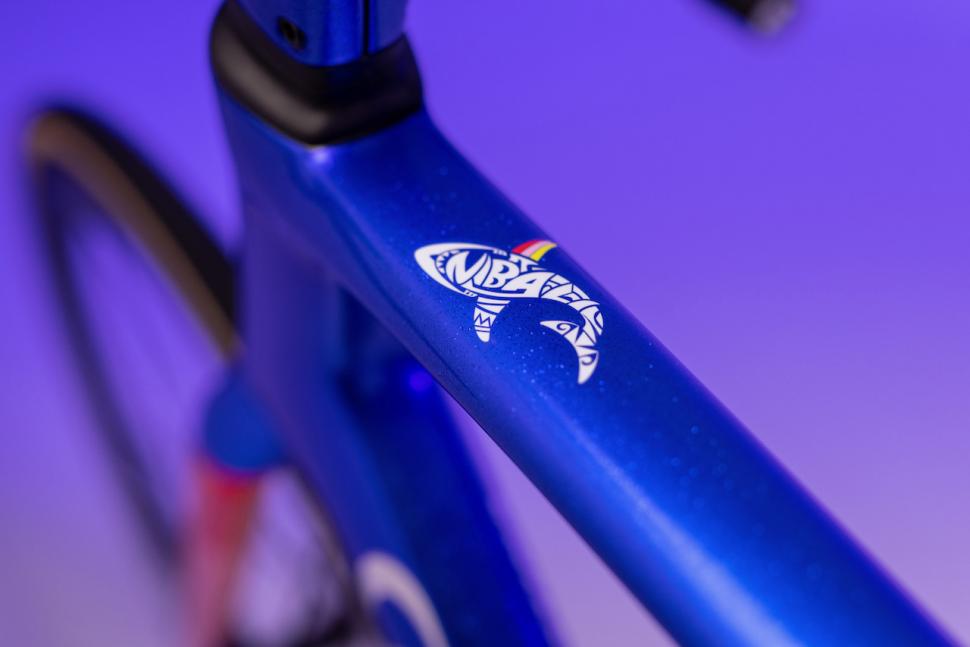 On top of the top tube, just behind the head tube junction, Nibali’s name is incorporated into the representation of a shark. This is a reference to his nickname: he’s known as the Shark of Messina, the Shark of the Strait, or simply The Shark.

Red, pink, and yellow stripes are used on one of the shark’s fins, the colours representing the leader’s jersey in each of the Grand Tours. Nibali has been using this personal logo for a few years. 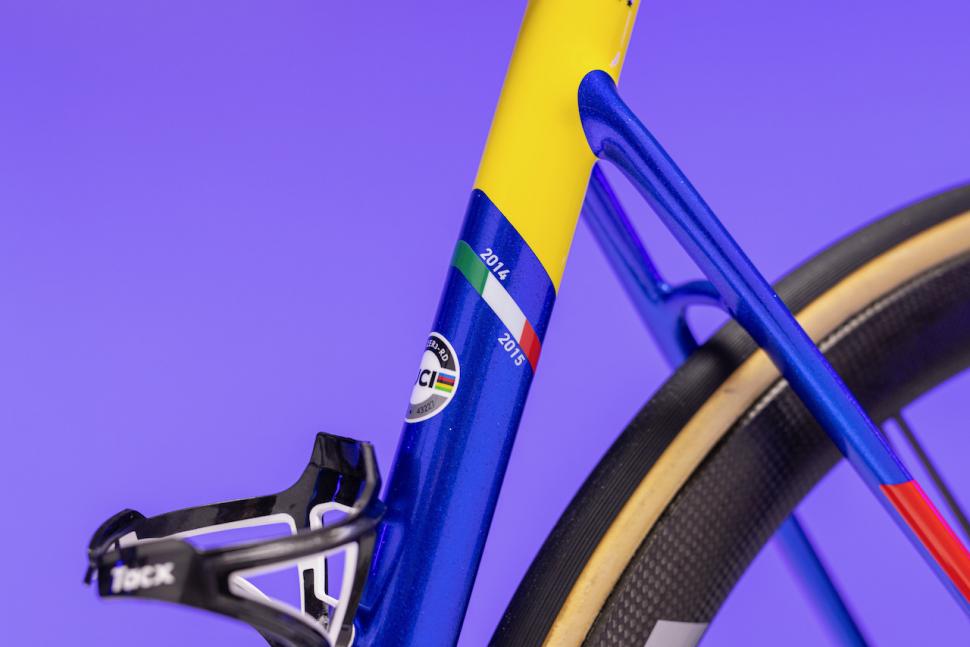 An Italian tricolore and the years 2014 and 2015 on the seat tube reference Nibali’s national championship wins.

The Wilier 0 SLR is the Italian company’s do-it-all road racer, combining a low weight with aero tube shapes. This is the bike that we see the Astana Qazaqstan riders using most of the time, although the Filante SLR aero road bike is available to them too. 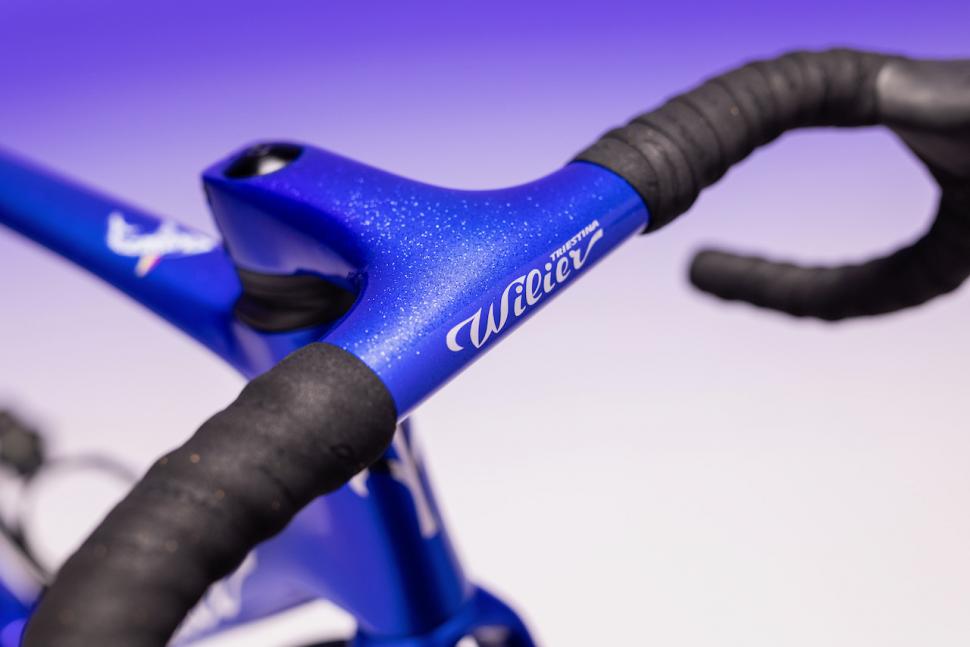 The 0 SLR feels light in use, especially for a disc-equipped bike, but its overriding characteristic is the high level of torsional stiffness.

> Check out our first ride aboard the Wilier Zero SLR 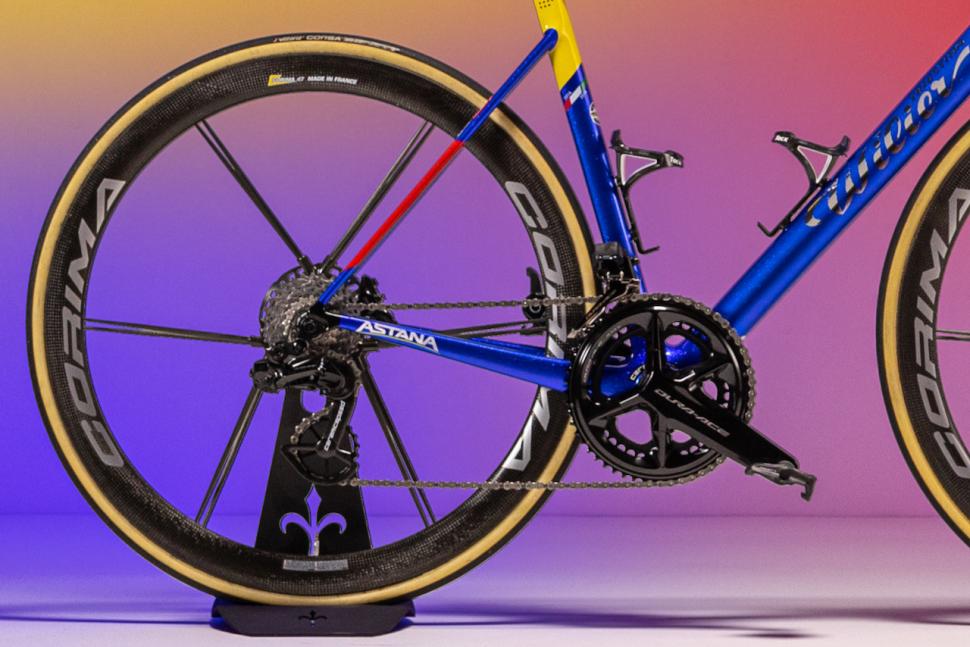 French brand Corima provides the MCC 47 wheels, made with a structural foam and a horizontal unidirectional carbon fibre bar inside the rim designed to increase rigidity and strength. Corima uses just 12 carbon spokes front and rear and says that the pairing of the spokes “leads to a considerable reduction in resistance and influence from cross winds”.

The wheels are fitted with Vittoria Corsa tyres.