road.cc Recommends - A closer look at the Hammerhead Karoo 2

If you're in the market for a new GPS, the Hammerhead Karoo 2 is well worth a look. It's neat, feature-packed and well worthy of a place in road.cc recommends. Find out why!
by Liam Cahill

This article includes paid promotion on behalf of Hammerhead

In this road.cc Recommends special, we’re looking at Hammerhead’s new GPS computer, the Karoo 2. This cycling computer did very well when we reviewed it, so now we're taking a closer look at what makes it so good.

Before we delve into the new Karoo 2, let’s take a little trip back through Hammerhead’s history. The original Hammerhead navigation device actually looked a bit like a hammerhead shark. It synced with a phone app and used LEDs for navigation; it was crowdfunded successfully, and back in the day Dave even chucked some of his own money at the crowdfunder. It certainly worked, but didn’t really get much traction.

After that came the original Karoo, which we reviewed back in 2018. With its big screen and Android-based operating system, it was a big step forward. There were a few issues: it was pretty bulky, and there was no hardware beep to warn you of upcoming turns. But overall it was an excellent first full GPS for Hammerhead, gaining a bit of a cult following 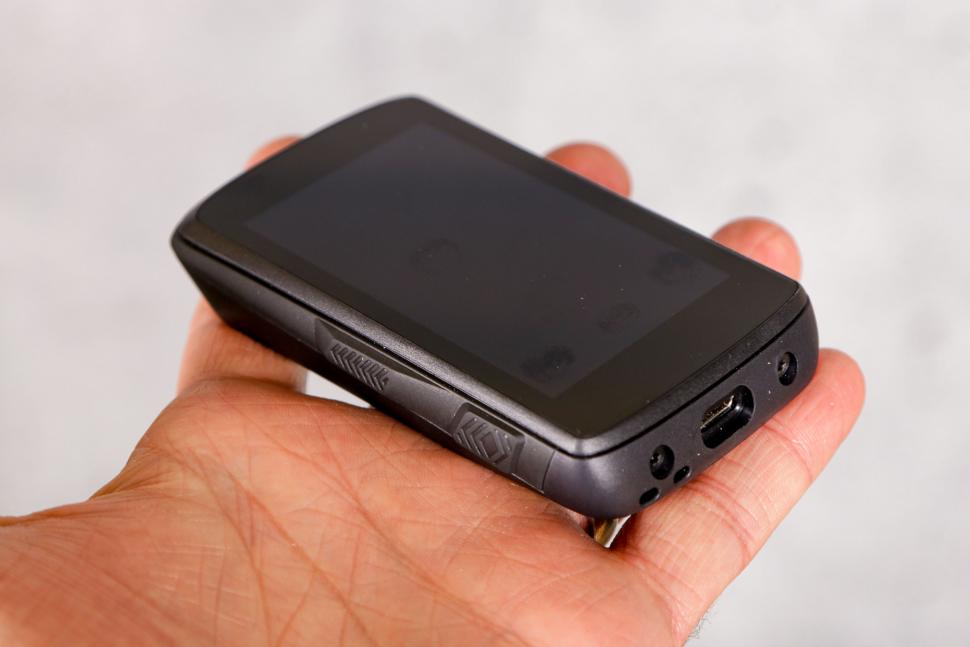 Skip forward to 2021 and the second generation of the Karoo has landed. Anna reviewed the new unit for us, and she thought it was excellent. Dave has been using the Karoo 2 as well for a couple of months now and he's impressed too. It’s also good enough for the World Tour, with Israel Startup Nation using the new Karoo, meaning riders like Chris Froome and Mike Woods have one on their bars. So what do you get in the box? First, there’s the computer itself. It’s slimmed down considerably from the first generation Karoo, so it’s now a comparable size to its direct competitors from the likes of Garmin and Wahoo. You get a 3.2-inch touch screen, with hardware buttons on the side. Inside it’s still running Android, and there’s 32 gigabytes of storage and 2 gigabytes of RAM. That’s a pretty powerful spec, and the upshot of that is that the Karoo 2’s touch screen and buttons are very responsive, and there’s very little lag when moving between screens.

You get audio alerts now too, which is really helpful when you’re navigating. You can also use the audio alerts to warn you of approaching cars if you’re paired with a Garmin Varia radar, and to guide you through the different intervals in workout mode. So, with the more compact size and the hardware beep, Hammerhead has addressed the two main gripes that we had with the first generation Karoo. 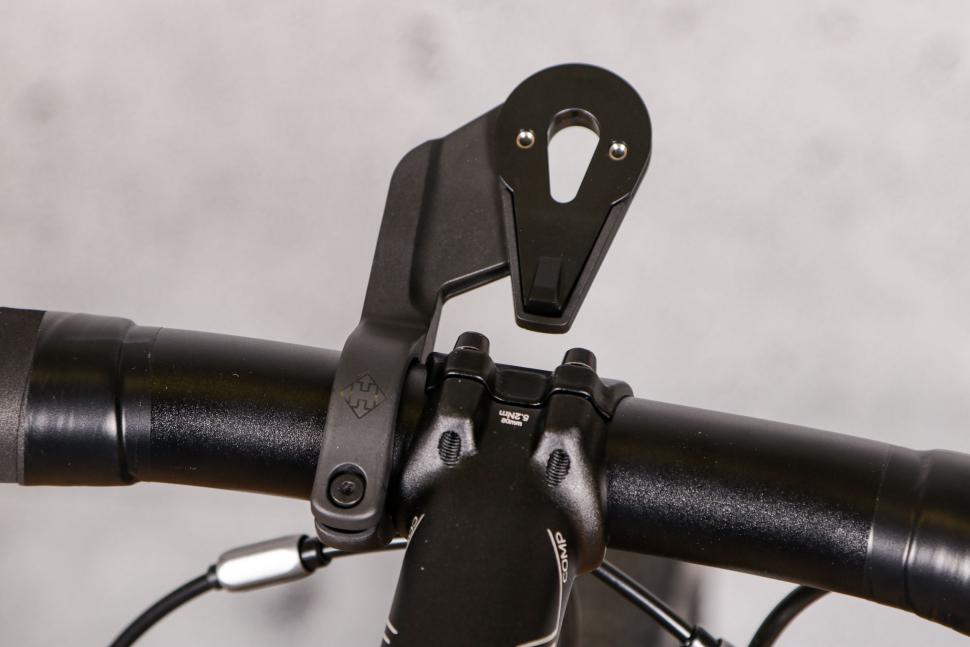 In the box, you also get an out-front mount for your bars. Hammerhead uses a proprietary mount for the new Karoo, which slides into place with a nice reassuring click for a sleek and aerodynamic look. That being said, if you’ve already got a bunch of Garmin mounts then included is a quarter-turn plate that slides into the mount, so you can use that instead. 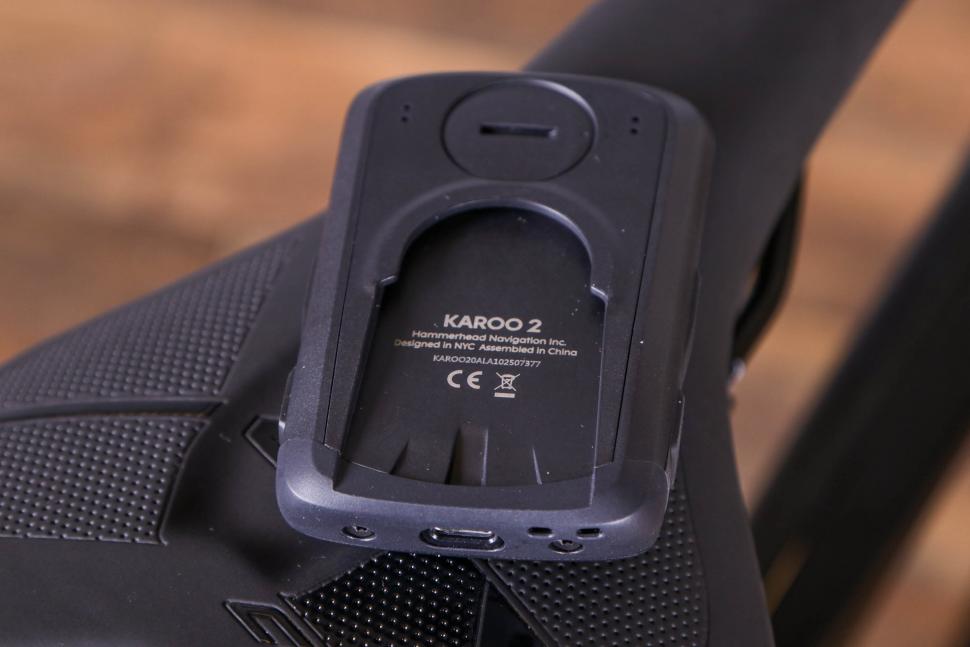 The Karoo 2 has all the connectivity you’d expect. You can connect it to Bluetooth and ANT+ sensors and devices, and it has a wifi connection for uploading rides and downloading updates. As well as all that, there’s a SIM card slot in the back of the device. If you install a SIM you can enable live tracking, and upload your rides and download your routes without a wifi connection. Charging the Karoo is via this USB-C port on the back, rated as IP67 waterproof.

So, there are a lot of changes to the physical unit for this version 2. But what’s it like to use? 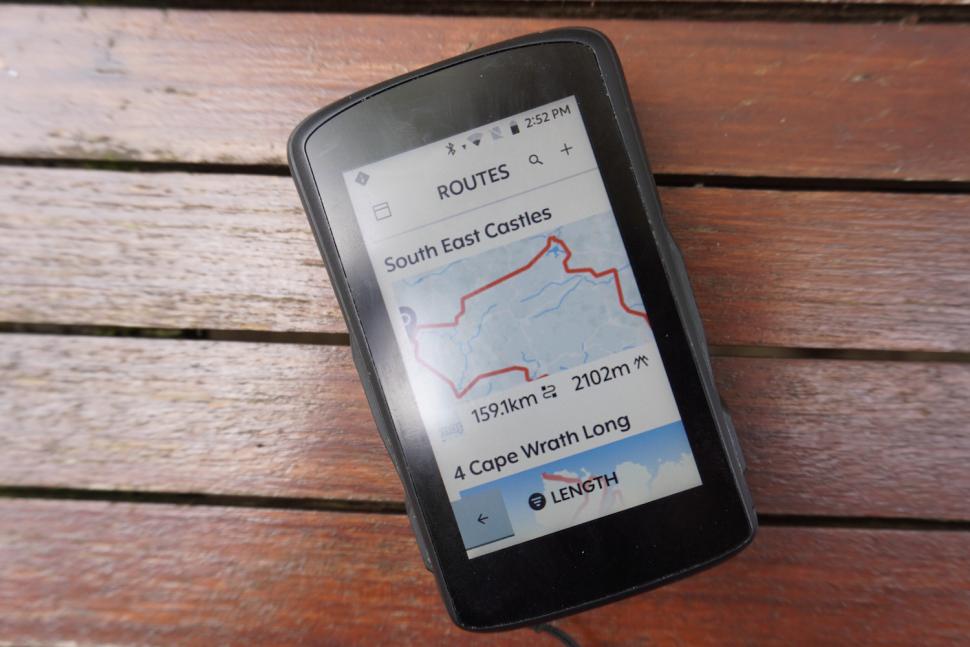 There’s a learning curve with any new thing, but it’s pretty simple to get the hang of. We mostly use a GPS like this for navigating and recording rides outdoors, and for day-to-day use on the road it’s excellent. You can sync your routes from tools like komoot, or you can create them on Hammerhead’s own dashboard app which works pretty well. And if you’ve got a data connection on the Karoo, you can route directly on the device as well.

Another thing you can do is add the Karoo Route Grab extension to your web browser, then you just click on the icon and it'll import the route from whatever webpage you’re looking at direct to your Hammerhead Karoo dashboard. 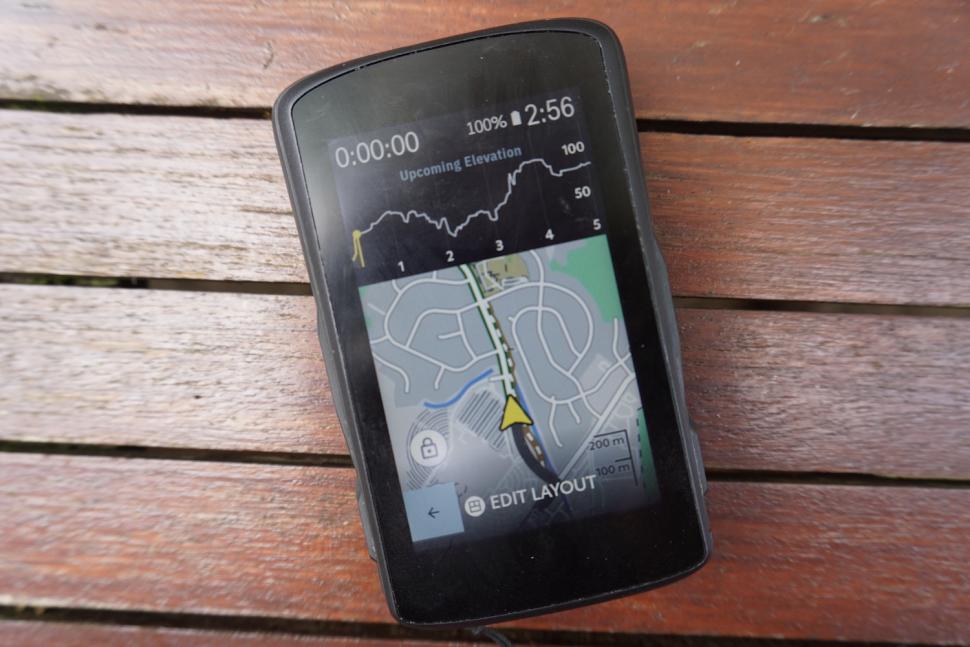 Turn-by-turn navigation works really well, and there’s an elevation page too that shows you what’s coming up on your ride. The Karoo 2 will re-route on the fly if you go off-course, and there is masses of internal storage for maps. That means if you’re heading abroad, you can just download whatever bit of the world you need. The map detail is really good, and turn-by-turn directions pop up from the bottom of the screen. If you’ve enabled the Karoo to get notifications from your phone, that’s where you’ll find them too.

The Karoo can also detect the climbs along the way and gives you a graphic of the full climb, what the gradients are along the way and how far it is to the top. You might not be chasing the KoM, but it is still a useful feature for pacing your effort. 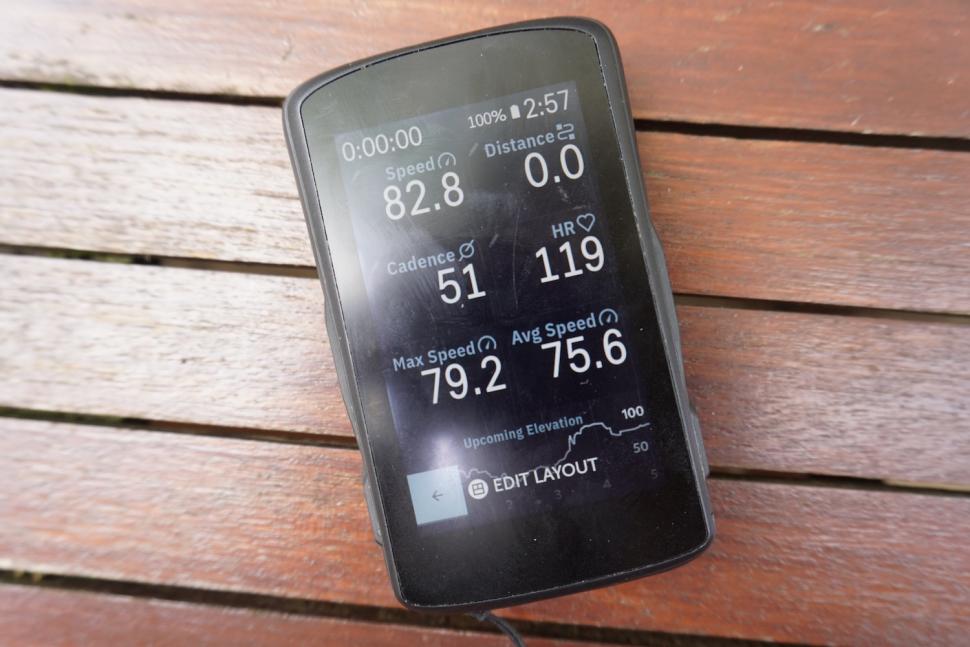 The Dragontrail scratch-resistant screen has an anti-glare coating, meaning it works well in direct sunlight. While touchscreen is never going to be as effective in the rain, thankfully the Karoo has plenty of hardware buttons so you can lock the screen and, use those for swapping between pages when it’s really raining.

In terms of what the screen shows, the world’s your oyster really. You can have pretty much any number of data fields... well, any number up to 12 anyway! There are 10 different map layouts with various other data field combinations, and 11 graphical layouts for things like elevation graphs and heart rate and power zones. You can have multiple pages, and then multiple different profiles with different sets of pages. So whatever you want, you should be sorted. 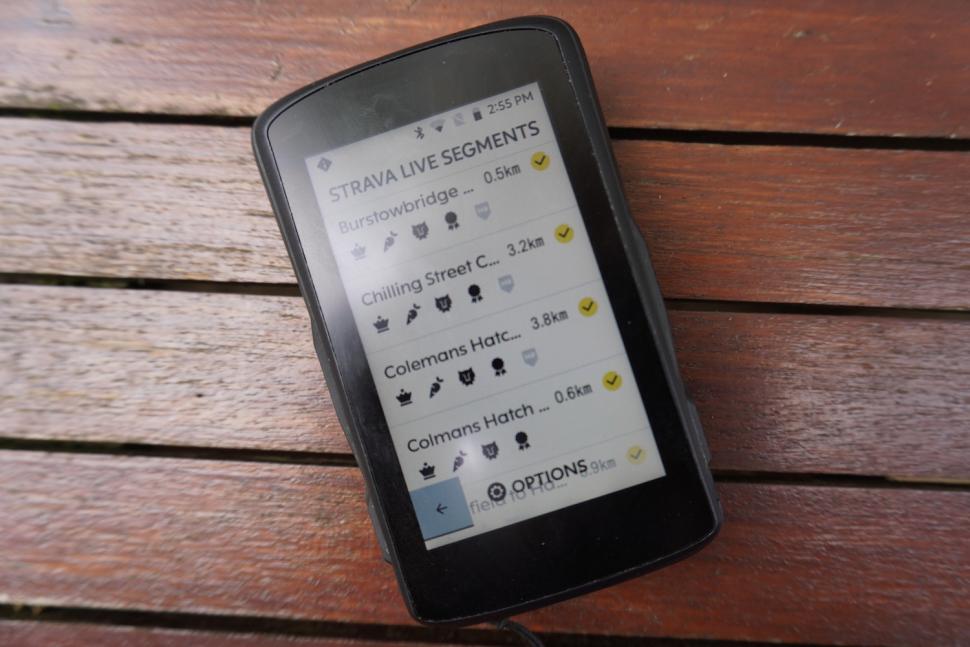 You can connect it with a Strava premium account and it’ll automatically sync your starred segments onto the device. If you do that, then the Karoo's live segment overlay is then displayed as you hit the segment. It’ll show you the distance covered in the segment, the distance remaining, the elevation profile and the elapsed time.

A little yellow circle indicates your profile, a carrot symbol represents the fastest person you follow and a wolf is shown for your nearest competitor behind you. It’s a nice bit of gamification, and great for motivating you on those super hard efforts. 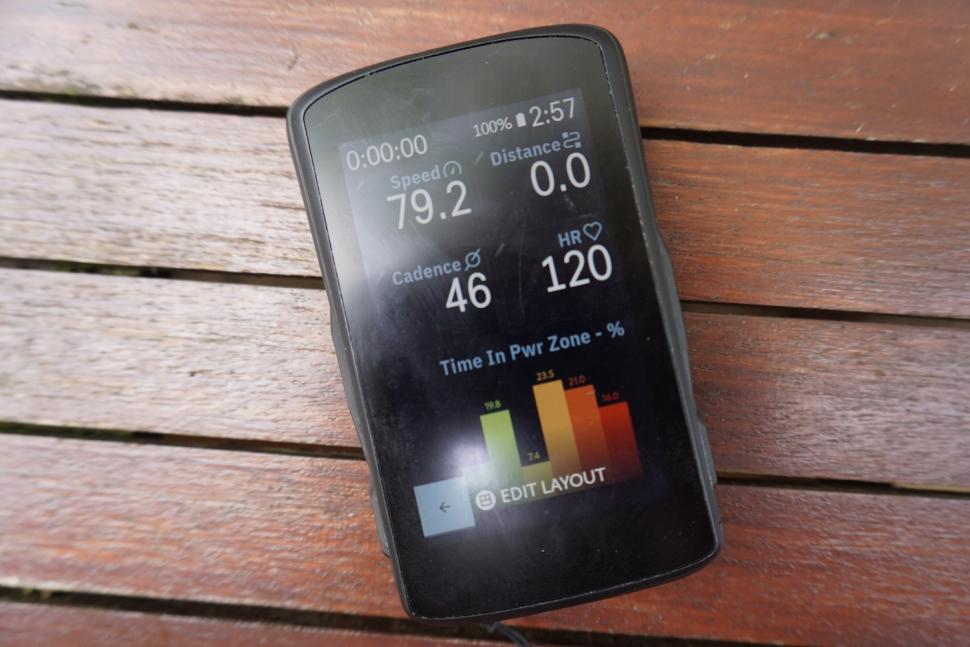 The battery life is pretty good too. Hammerhead says between seven and 14 hours depending on how you have it set up; we generally found that we got about 10-11 hours out of one charge. It’s also worth saying that the USB-C port will charge it from flat to 30% in 30 minutes, so it’s easy to top it up at cafe stops. If you carry a battery pack on longer rides, then it’s easy to keep it running even over multi-day adventures.

The Karoo 2 has made it into the road.cc Recommends list because it’s building on what was already a good GPS device, and is better in nearly every way. It’s more powerful, the interface is slicker, it’s easy to use and it has loads of cool features. Everyone uses a GPS computer in a different way, but there’s enough packed in here to make it a really good choice whatever your needs are.

So that’s all you need to know about the Hammerhead Karoo 2. Can you see it ending up on your bars? Let us know in the comments below and ask us anything we haven’t covered.