Increasing accessibility to the indoor game, could this be the best distraction for packing in a serious workout for all budgets? We spoke to the game producers to find out what it is all about...
by Anna Marie Hughes

Hustle City is a single-player game where you race against the clock on a bike around the virtual streets, using your handlebars to steer and your turbo trainer to put on some speed—it is also now playable with dumb trainers with speed sensors connected up, as well as smart trainers.

Think Zwift but more skills and much more urban, promising to be “the most fun you can have riding an indoor trainer', is this a game that will hook more and more people into our wonderful world of cycling? 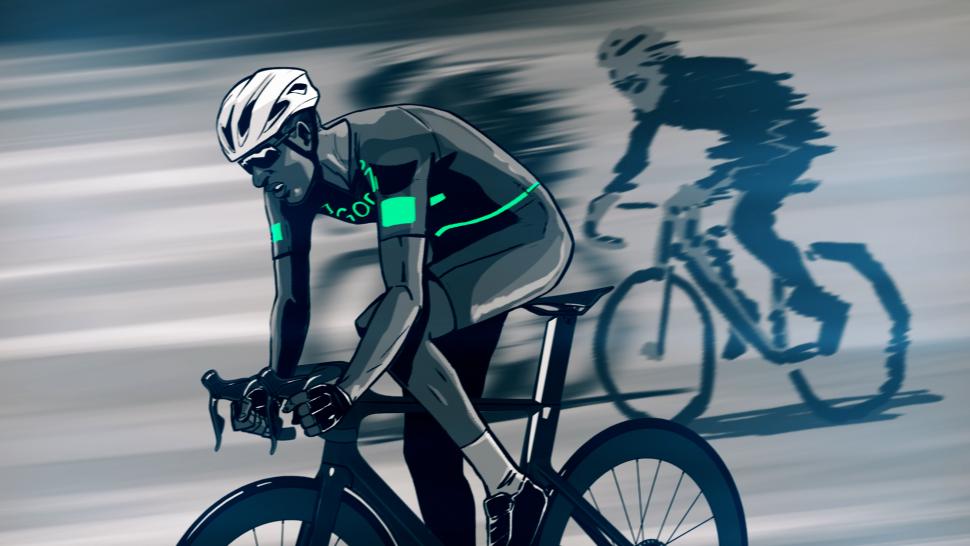 Hustle City is the story of Will Baldwin, from novice bike messenger to greatest cyclist of his generation, Marcus explains.

“You start as an angsty teen, who is aimless and not sure where to go. Then one night, he has a chance encounter with a friend on the streets in Hustle City and he embarks on this journey – first into the underground world of bike messenger work and then as the story builds, to different forms of racing, from underground street racing and into the more traditional forms of racing as he rises through the levels.

“Hustle City is a cycling fitness game—we are focused on it being fun and similar to traditional video games.

“It is story-driven so in a lot of ways the challenges and training opportunity that we present are all being woven with the story that you experience as Will Baldwin.”

The story of the game draws on the team’s own experiences as cyclists and how they entered the sport. Marcus shares: “I came to cycling late in life. I wish I started earlier, but instead I played ball sports growing up. Later I started working as a bike messenger on and off as I was trying to start a video production company. I would fill my time working as a contractor in the messenger world and that’s where I was introduced to so many amazing people and opportunities within San Francisco.

"I started on a fixed gear because it was cheap and the cool thing to do and then I got into the fixed gear racing scene. When I tell people that’s how I started, they’re like: 'That’s crazy, nobody starts there'. “Hustle City provides a new and unique entry point into cycling that can attract a whole new audience who might not think about cycling and end up being drawn to cycling in a different way like I did,” Marcus says.

Steering your way through the traffic of the city and avoiding crashing is part of the fun as you push on the pedals to bash out your deliveries.

One of Hustle City’s core philosophies is “easy to learn, hard to master” Marcus tells road.cc. “You get on the bike and steering is relatively intuitive. It’s different as you’re on a trainer but as you start to think of the handlebars as a video game controller, it’s not hard to steer.

“Then when you start putting on the power and pushing faster and faster, it gets difficult to weave through traffic and keep yourself upright—there’s definitely a learning curve.”

The game is designed to be accessible at first but holds your attention and gives the player opportunities to develop skills.

The other core philosophy is “meaningful failure”, Marcus says, with the most visually obvious example of this being crashing.

“If you take the wrong turn or pick the wrong line, boom, that’s a micro failure. It gives feedback like: oh man, I’ve got to try harder.

“We’ve also built in a couple of points within the whole story arc in which you can fail. The intention is to present the player with moments in which they have to improve their skills and rise to the challenges presented, as in any video game.” As you speed around the city streets, your goal is to make money. That’s Hustle City’s version of experience points to show advancement in the game.

“You’re going out, making deliveries and, depending on how well you do on each delivery, you’ll make different amounts of money. If you’re crashing all the time and coming in late, you’re not making any tips,” Marcus explains.

This creates ways players can compare themselves in their own story. “It’s your game, you’re competing against yourself," says Marcus.

“In Hustle City, challenges are presented so you’re going to fail, almost, it’s just a matter of how well you can do before you fail.” Putting a more positive spin on it Marcus adds: “It’s about seeing how well you can perform given the challenge. There are only a few moments in which you’ll be blocked from moving forward in the story until you can beat the level, so to speak.”

There’s no multiplayer mode yet, but Strava integration is in development.

“Through Strava is how you’ll be able to compare yourself on leaderboards to compete with friends,” Marcus says.

Will it get you hot and sweaty?

With specific training and racing platforms such as Zwift well and truly rooted, Hustle City looks to offer a workout for people on days when they’re looking to mix things up.

“One of our first testers was Chas Christiansen, who is a rock star in the fixed gear messenger world and super strong. It turned out he grossly underestimated how hard the game was.” It may not be Zwift, but this is still a real workout…

It’s about 40 minutes in length for a session, all episodes under an hour. But the beauty of this being a video game is that your concentration is less on your legs burning and instead on the immersive experience in the city.

“Our testers said that they found that riding within Hustle City makes time fly by. We set out to have fun, tell a story and for that to create an experience where you think you’ve been riding for 20 minutes but you’ve actually been smashing it for 40. That’s a massive win.”

What’s better than a training session that you haven’t even noticed you’ve suffered through until you completed it? Bish, bash, boom! Sometimes you just need a distraction from the suffering, and this fills that gap.

> Video - a Zwift setup for every budget

How has Hustle City achieved this while still enabling you to pack a worthwhile workout in? Marcus says: “First, you are racing against the clock, so there’s this sense of urgency.

“Second, challenges are broken up so each is small. They’re micro intervals, but we don’t say they’re intervals, so you’re being tricked into them.

“Third, you don’t know what’s coming next. There’s a challenge which is the carrot you’re chasing. But it’s constantly changing and keeping you on your toes—you just lose track of time.”

Hustle City is not just for smart trainers anymore, the latest update to the game means it's now playable with dumb trainers with Garmin or Wahoo BLE enabled speed sensors.

As you need to turn your bars for steering, the game is not compatible with the Wahoo Kickr bike or Kickr Climb.

A mount for attaching your phone or iPad to your handlebar also helps. “Steering is all done through the gyroscope and accelerometer within the phone. You don’t need any additional device.”

Also for steering, Marcus explains you need a way to break the friction of your front wheel on the ground. “A towel, frisbee, metal camping plate, anything goes! You just need to be able to rotate and move your bars.”

That said, for an optimal experience, Hustle City recommends using a rotating swivel. You could use a fancy steering block such as the Elite Sterzo, but the game does not support its smart functionality.

Increasing the accessibility of the game is important to the game's producers.

“For me, fixed bikes were so cheap, I could actually buy one and start to race. It was that accessible entry point that helped me get to where I am now,” Marcus stresses, and he wants Hustle City to emulate this, where possible.

“Accessibility is something we want with Hustle City.

"Hustle City believes in providing players with the lowest barrier to entry possible and working with technology that most people already have readily available to deliver a unique indoor cycling experience.

"The latest update [to include dumb trainers/speed sensor compatibility] proves cutting edge technology can be accessible to all budgets from the get go."