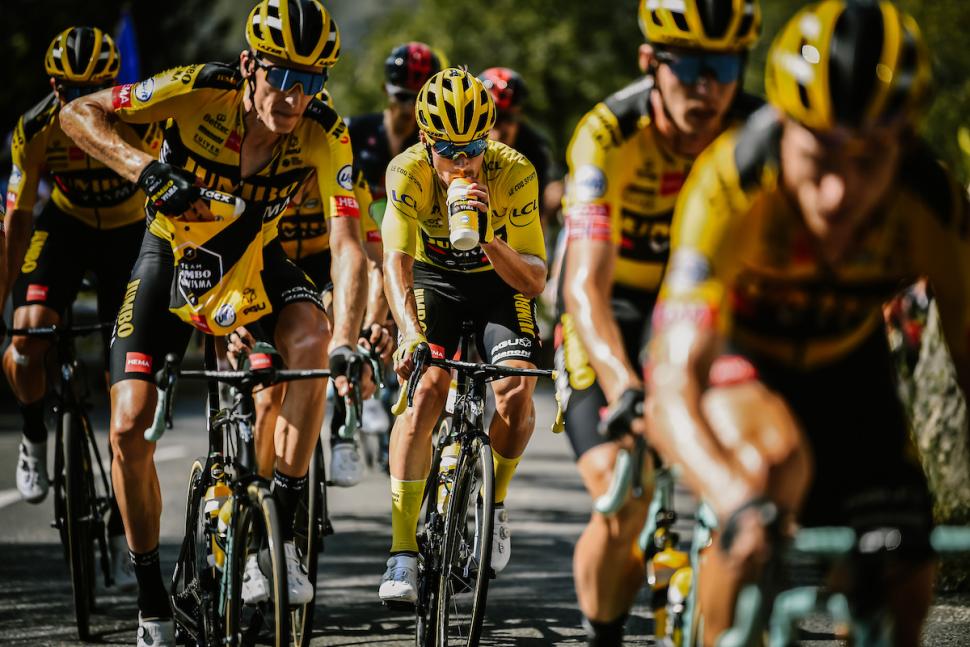 What do team mates actually do on a mountain stage? Here’s how they help their leader
by Liam Cahill

Given that we haven't actually gone to the Tour de France this year (again) to take close-up photos of components and annoy the riders until they answer our questions, we thought we’d take a step back and try to answer some of the questions that often get asked when the Tour de France is on, as well as refresh some of our answers to your questions from last year.

Under our piece on ‘the inner workings of a Tour de France sprint lead-out’, last year reader rjfrussell left this comment:

“I'd like an equivalent piece on the mountains - during stage 15, the commentators were all obviously purring about Jumbo-Visma's team dominance. What I don't quite get though, is the extent to which that really matters. Pogacar was able to sit on their wheels and take the benefit of their team effort and win the stage.”

Ever happy to answer your questions, and quickly realising that the colossal mountain stages of the Tour de France can throw up some equally intricate team tactics, we’ve taken a closer look at how a team gets its leader over the highest mountains.

Firstly, let’s split this into two sections, looking first at a ‘strong’ team and then a ‘weak’ team. When we say strong vs weak, we’re looking at the team purely from a General Classification (GC) angle. A strong GC team will skew its abilities towards the high mountains and consist mainly of climbers with a couple of riders for the flatlands. In the case of Jumbo-Visma, these two riders are a TT rider that can climb in the form of Tony Martin and Mike Teunissen. They’ve also got Wout van Aert, a classics and cyclocross rider that can climb, sprint, TT, look after his leader Roglic on the flat and may also be a wizard, who knows. The rest of the team are climbers with tiny arms and visible cheekbones.

A weak GC team may simply have lost its climbing domestiques early in the first week crashes, or hold other ambitions in the race. Teams like Trek-Segafredo and Team BikeExchange all have slightly more classics riders in their teams. This allows them to chase more stages but can leave their leader without a helper towards the top of the climbs.

I’ve got the strongest team

Go back through the years and there has always been a GC rider with a strong team. Even just this side of the millennium, we’ve had the likes of Discovery*, Leopard-Trek, Sky and now Jumbo-Visma. These teams have always had a good balance of riders along with a main domestique that could have won the race had it not been for their own team leader. But what to do with your strong team. Here is a break-down of a common day in the mountains. As they have been the dominant team in recent Tours, we’ll use Jumbo-Visma as our example. 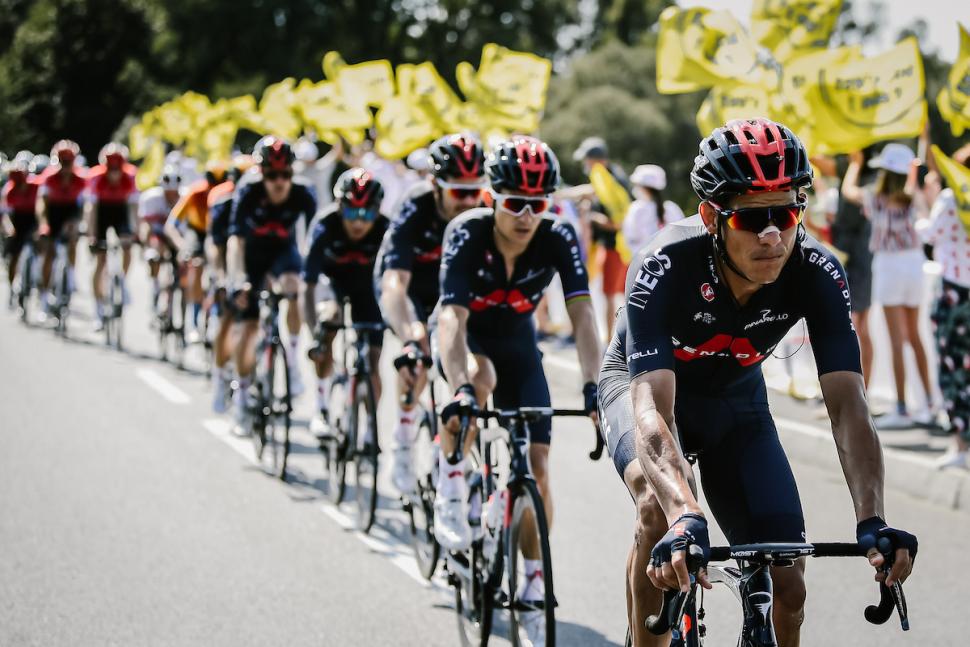 The bread and butter work of a domestique on a mountains stage is done by our two bigger riders, Martin and Teunissen. Teunissen will take the unglamorous jobs like controlling the bunch during the early breakaway attempts. If a dangerous rider gets up the road, he will be expected to bring it back. Once the break is established, race leader Roglic will stop for a nature break to signify that the break is gone and Teunissen will stop with him to pace him back to the peloton. After this, he will be fetching bottles and working to set a gentle tempo on the front of the bunch. He won’t be around for long when the road goes up.

At this point, the machine that is Tony Martin will take over, setting a comfortable tempo on the early climbs, saving the legs of Roglic and the pure climbers like Kuss and Kruijswijk. For these riders, the early part of the stage is all about eating, drinking and making sure that their leader, Roglic, does the same. They’ll all need their energy for the crucial climb. 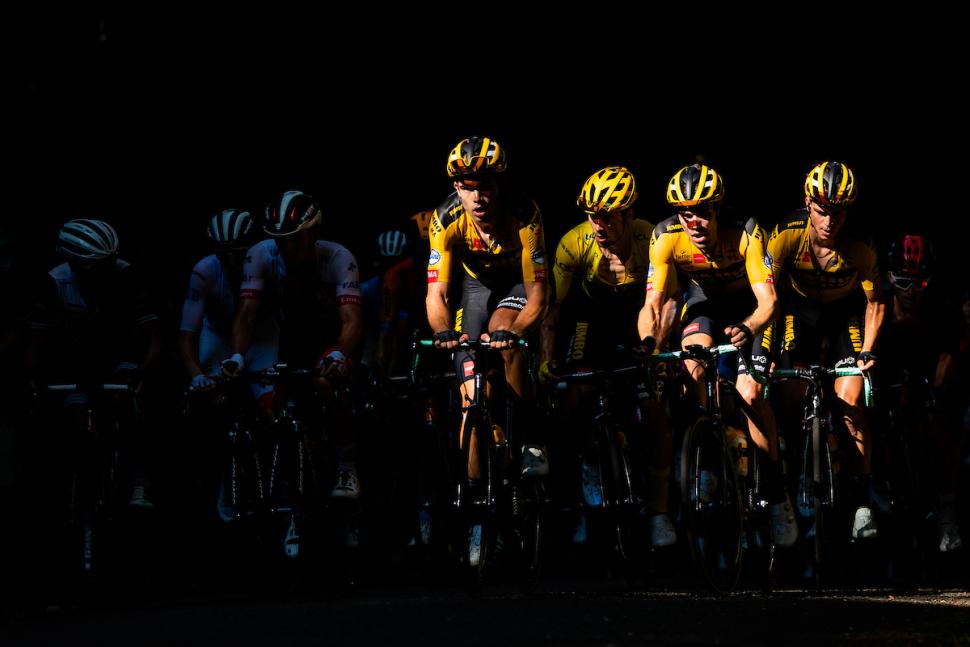 The crucial climb often comes towards the end of the stage and today, it is the final climb which goes right to the finish line. The lead in to the climb is incredibly important as Roglic won’t want to waste energy getting to the front when the road kicks up. The Tony-bot and Van Aert will drive the pace to keep Roglic to the fore, with Kruijswijk then settling into a strong pace on the lower slopes of the climb.

Sit in for time savings

While it may come as a surprise, there is a decent draft to be had when climbing at the speeds that the pros do. This depends largely on the gradient and the speed that the riders are travelling at but as a general rule, it’s easier to follow a wheel than take the wind yourself.

This study looked at the impact of having one teammate to follow up a 2.7km climb with an average gradient of 7.4%. The results showed an average time saving of 23 seconds when riding behind a teammate with the test subjects riding at a similar power and registering the same blood lactate and RPE scores as in their solo effort up the climb.

While 23 seconds might not sound like a lot, we must remember that the test was conducted on a climb of just 2.7km whereas today’s final climb is 18.6km at an average of 7.7%. The subjects used in the test were also ‘strong amateur cyclists’, so we could realistically expect the world’s best pro racers to be riding at a faster speed, enhancing the effect of drafting a teammate.

As a result, having teammates to draft behind can help a rider go a lot quicker up a climb.

How to use those teammates 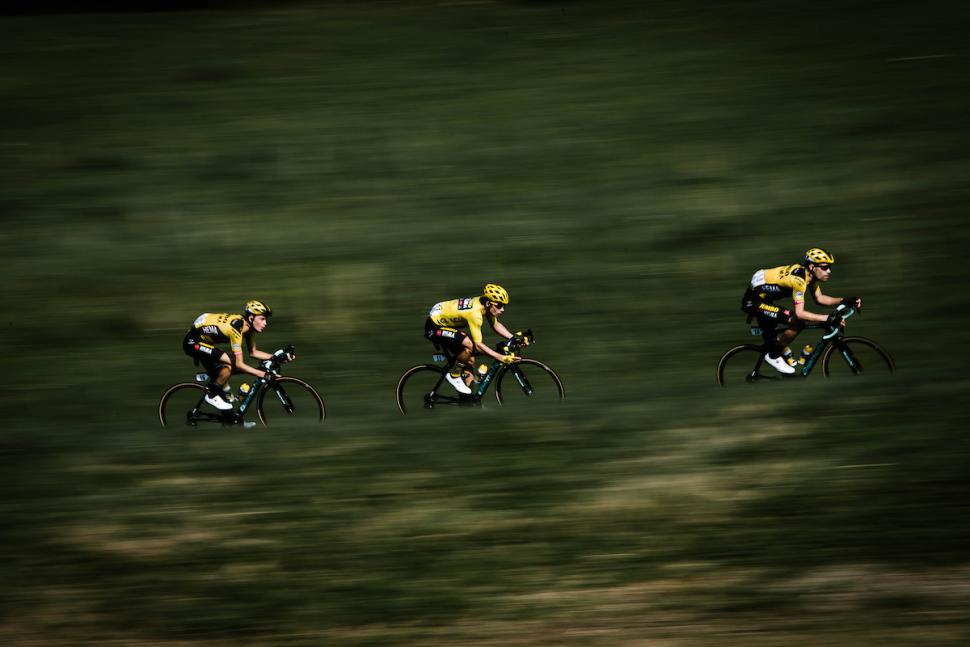 Now we know how useful those teammates can be, it’s time to look at how they are used. To make this far simpler, I’m going to standardise the whole Jumbo-Visma team, making them the same weight and body shape. This is so that we can look at the watts(w), or pedalling force, needed to maintain a certain speed.

Let’s say that our leader, Roglic, can sustain 400w on today’s final climb. That’s his threshold. Go above it and he risks making an effort that his body can’t sustain, blowing up and then having to go slower to recover. This could lose him time, but he doesn’t want to sit too far below this threshold as the slower riding speed might tempt his rivals to attack.

As he is going to be drafting his teammates, he can ride at 400w when they might be riding at 450w in front of him. Working through his teammates one by one, he can get to the top of the mountain in the most efficient way and this is roughly what Jumbo-Visma have done for the whole race. It’s what Team Sky did before them and what Discovery did. You get the picture.

The perfect plan above can be rudely interrupted by a pesky rival. This rival, like Enric Mas from Movistar, wants to take back some time in the GC race so they attack and ride off up the road. Now is the time to deploy a teammate. In this instance, it’s Kruijswijk and you tell him to gradually wind up the pace to bring Mas back. This will be a big effort for Kruijswijk so he may not be able to work for much longer after Mas is brought back, but at least that threat is neutralised. 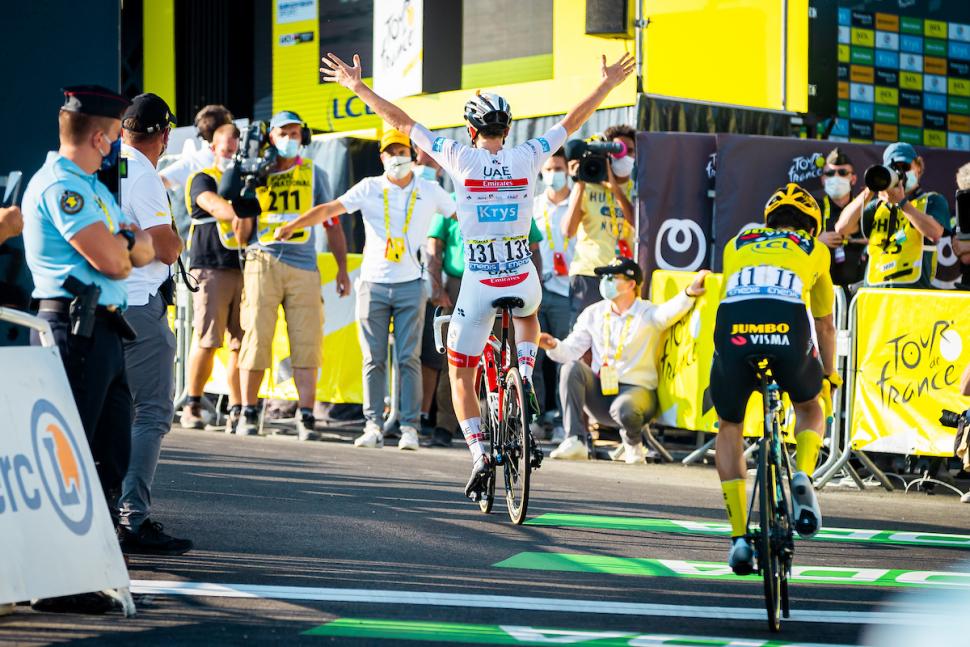 In the closing kilometres of the climb, with the finish line tantalisingly close, Sepp Kuss takes over, setting a very high pace that will only last a short time. He will do his best to chase down any attacks, but we’re so close to the line now that Roglic will feel confident that he can follow the attacks.

If you haven’t got the luxury of the strongest team in the race then you’re going to have to get creative. The simplest option is the one that rjfrussell noted in his question. You can piggyback off the work being done by the strongest team on the climbs, taking their draft and allowing them to pace you up the climb. This is limited in its usefulness, especially when the attacks start flying or you want to do some attacking yourself.

Infiltrating the breakaway with some of the larger riders on your team is a tried and tested way of getting them onto the final climb ahead of you in the peloton. They won’t be contesting the stage, but can be used as a bridge should you want to attack early on the climb. If you get away from the peloton, your teammate can sit up and wait for you, then give you everything they’ve got to pull you up the climb for a few kilometres. This will give you valuable respite, allowing you to take a drink and maybe even get a gel down. The teammate can also have been loaded up with bottles to pass to their leader when they meet up.

Back in the 2020 Tour, Mitchelton-Scott (who are now Team BikeExchange) deployed great tactics on stage 16, sending climber Mikel Nieve and rouleur Chris Juul-Jensen up in the early break. They then left their leader Yates with Chaves to help on the climb but this gave them options. Had Yates wanted to attack, he had Chaves to drive the pace during his attack. Had he escaped the clutches of the peloton, two very capable teammates were up the road ready to shield him from the wind. This also allowed the team to chase the stage win should that have been a possibility and once rouleur Juul-Jensen was dropped from the break, he could be sent back with food and water for Yates. It’s good to give yourself options.

Realistically though, you’re going to have to win this the hard way. You’ve only one teammate to help you so use them carefully. Often, a rider with just one teammate will get them to drive on the front with everything they have. This is in an attempt to expose the leader of the strong team and make it a head-to-head race instead of one dominated by team power.

Will we see this tactic work in this year's Tour de France?