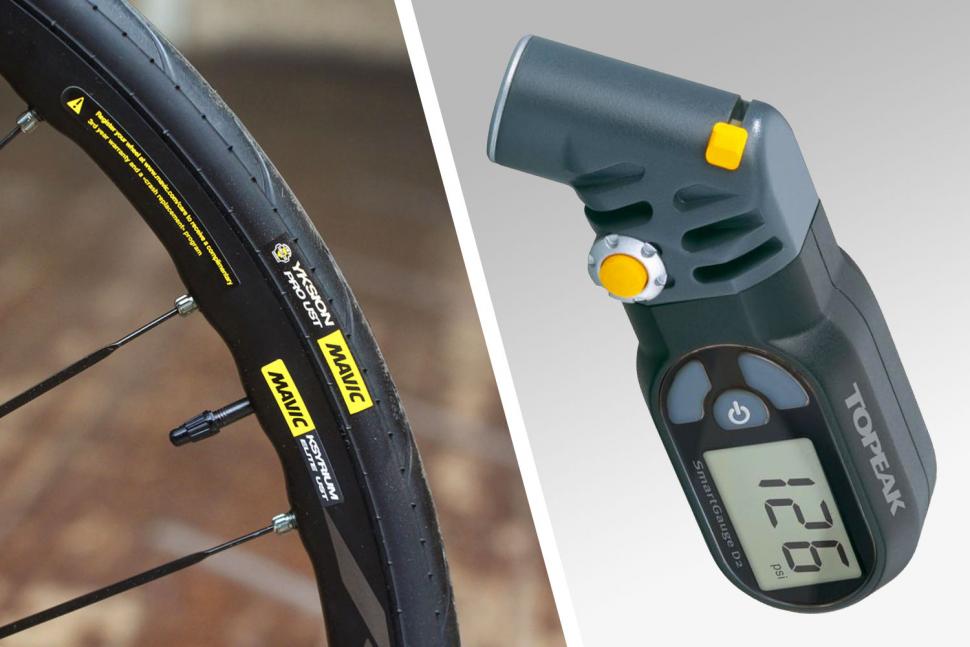 How to choose the best bike tyre pressure — balancing speed, comfort and grip

You just pump them up as hard as you can right? It's not quite that simple
by John Stevenson

Getting the right tyre pressure is simple, right? Pump your tyres to the range recommended on the sidewall and away you go. Turns out it’s not quite that straightforward.

Your tyres do a lot of things. They grip the road so you can steer and go forward. On a road bike, they provide the only significant suspension, cushioning you from bumps and holes. They have to be tough enough not to puncture too easily, but thin and light enough to roll well. All these things are affected by pressure, as well as the design and construction of the tyre itself.

When you sit on a bike, your tyres compress. If they compress too much, they’ll writhe and squirm on the rims, making the bike harder to control, increasing rolling resistance and putting you at risk of pinch punctures. If they doesn’t compress enough, the ride will be harsh and there will be so little rubber on the road that grip will be reduced.

Somewhere in between those extremes, there must be an ideal compromise. How do you find it?

As well as pressure, how much your tyres compress depends on your weight, so if there’s an optimum pressure it will depend on your weight and the type of riding you do.

Engineer Frank Berto, who investigated this issue for Bicycling magazine back in the late 1980s, came up with a formula based on the weight on each tyre; he reckoned that the happy medium involved a tyre being compressed 15 percent of its height.

As a recreational and touring rider, Berto was probably more interested in comfort than speed, so this idea is controversial, because Berto recommends lower tyre pressures than most of us use.

Tyre drop is hard to measure, but Berto did a shedload of measurements, and plotted the pressure needed to give a tyre drop of 15 percent for a range of rider weights and tyre widths. Here’s a graph of his recommendations, showing the relationship between pressure and wheel load for each common road bike tyre size. 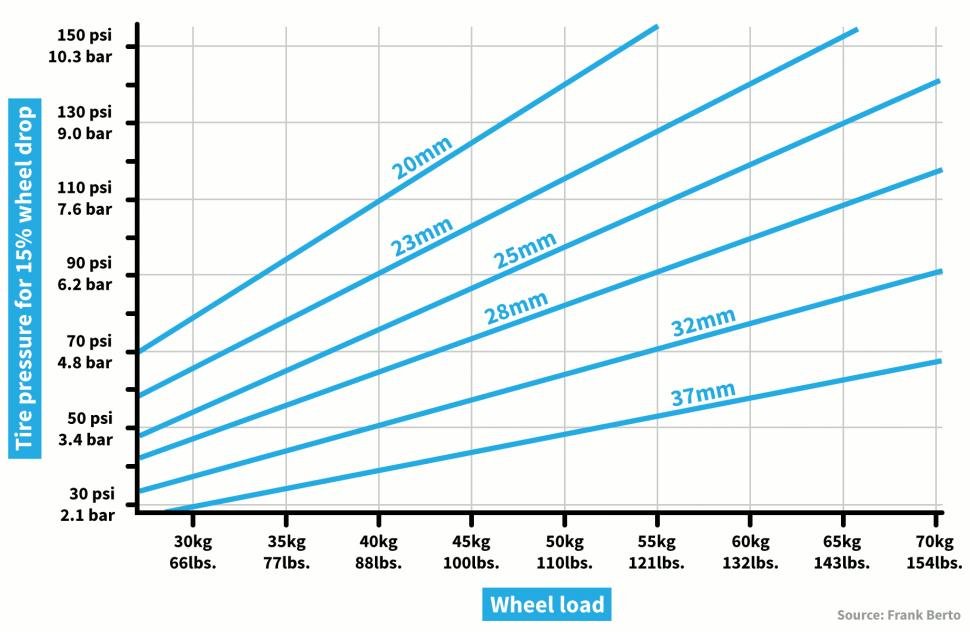 There are two important things to bear in mind here. The first is that the tyre width is measured not claimed. When Berto originally did his work on tyre drop there was a big problem with tyre manufacturers mislabelling their tyres because the easiest way to claim you had the lightest 23mm tyre was to mark a 21mm tyre as a 23mm. That’s improved, but some tyres are still wrongly marked; I recently put calipers on a nominal 28mm tyre that turned out to be just 26mm wide.

The other is that wheel load is per wheel. If you weigh 72kg and your bike weighs 8kg, then your tyres carry a total of 80kg but it’s not evenly distributed. The rear wheel carries more of the load, usually between 55 and 65 percent.

To determine the right pressure, you’ll need to measure the load on each wheel. Put a bathroom scale under one wheel and enough wooden blocks, books or old magazines under the other to level the bike. Lean very lightly against a wall to steady yourself and sit in your normal position on the bike. Get someone else to read the scale for you. Repeat the process with the scale under the other wheel.

If your rear wheel is carrying 44kg and your front 36kg (a 55:45 weight distribution) and you’re running 25mm tyres, then reading from the graph tells you that you want about 90psi in the rear tyre and 70psi in the front.

That’s probably lower than you’re currently running, so think of it as a starting point from which you can tweak the pressure until you get a feel you like.

If the pressure comes out well below the minimum recommended pressure of your tyre, then you can go skinnier; if it’s well above, then use a fatter tyre if your frame will accommodate one.

As I mentioned, this approach is controversial. Another engineer, the late Jobst Brandt, author of ‘The Bicycle Wheel’ wrote in a newsgroup posting: “What Berto did not seem to consider is that hard cornering and rough pavement require higher inflation than comfort or other considerations might demand. Banking over to a maximum lateral acceleration of about 1g is not something that works reliably with a comfortably inflated tire, nor is encountering rough pavement with breaks and patches in the surface.”

Brandt was also sceptical about Berto’s notion that front and rear tyre pressures should reflect the loads on them. He wrote: “I run my tires at the upper end of pressure because snake bites are always a threat on mountain roads. When descending with hard braking, the front wheel carries the entire bicycle, with the back wheel at lift-off. The same is true climbing while seated on steep grades where front wheel rise is close at hand.”

More recently, Bicycle Quarterly magazine did some tests that revealed there was no speed advantage in pumping tyres up very hard. It was already known that when measured on a smooth drum rolling resistance didn’t decline much beyond a certain pressure. But as editor Jan Heine discusses here Bicycle Quarterly’s real-world testing indicates that when tyre pressures get too high, there’s no further reduction in rolling resistance. Heine believes that you lose the suspension effect of the tyres and that’s enough to push the rolling resistance back up.

With no tube to pinch, tubeless tyres give you the opportunity to run lower pressures with less risk. Jobst Brandt's concerns about high-speed cornering atill apply, though.

In fact, tyre deformation in low-pressure tubeless set-ups is a major consideration because if you load a tubeless tyre sideways hard enough it can lift off the rim and burp out your air and sealant. On a mountain bike that usually just leads to an embarrassing minor spill, but on a high-speed road descent, it could easily be disastrous.

We explored the subject of tubeless tyre pressures in a lot more detail in this article.

Where does this leave you and me then? I think there are five take-homes:

If you ride in a leisurely manner — a short commute, gentle pootling around the lanes — then you can afford to run quite low pressures for comfort.

At the other extreme, don’t bother over-inflating your tyres for races and time trials. Unless the road surface is glass-smooth you won’t get any advantage, and let’s face it where are you going to find a road like that in the UK?

In between, you should tailor your tyre pressure to your riding style and roads. Ride in flat country and on smooth roads? Go for the lower end of the range between the Berto 15% drop figure and the range marked on your tyres.

In the hills I’d follow Jobst Brandt’s advice for equal pressures front and rear if you like to descend quickly. I love to go downhill fast (it makes up for the fact you need time-lapse photography to observe me climbing) but a front wheel impact puncture at 50mph is high on my list of things I’m not keen to try, along with BASE jumping and being visited in hospital by Boris Johnson.

If you're not a demon descender, you can run a softer front tyre for comfort.

if you're running tubeless tyres, you have more leeway to experiment with low pressures, but you should probably still treat the Berto recommendation as a lower bound, or at least experiment carefully with pressures lower than the Berto graph recommends.

For many of these situations, going up in tyre size is also a good idea. Our Mat Brett explored the reasons for fatter tyres in a Trendspotting piece. It’s a convincing case.

To set your tyre pressure right you’ll need a pressure gauge. Track pumps usually have one built in, but they’re often not very accurate, especially if the pump is a bit old and has been kicked around the workshop floor.

A standalone gauge, properly looked after, is a better alternative. If you can find a sturdy, metal-bodied analogue gauge, grab it, but digital gauges like these are more convenient. 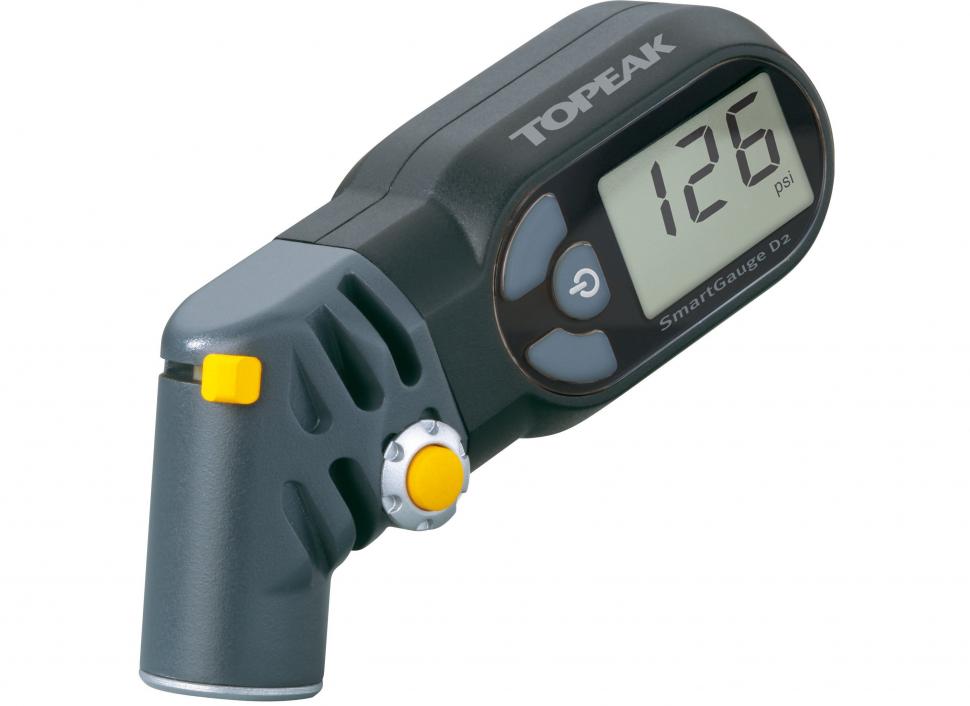 This well-regarded digital gauge measures in 1psi increments and automatically adapts to Schrader and presta valves. It reads up to 250psi so you can even use it on your mountain bike’s shocks too. 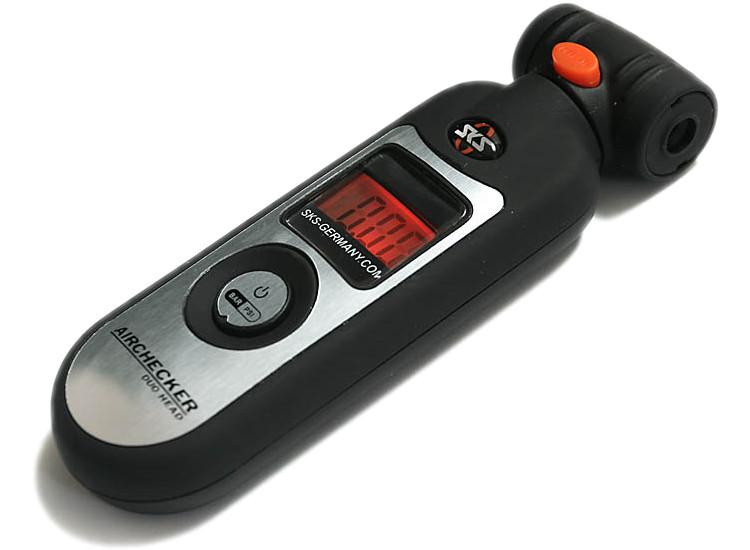 Accurate enough for workshop duties, yet compact enought to slip into the smallest of seat packs or jersey pockets, the SKS Air Checker is a very tidy digital tyre pressure gauge.

Read our review of the SKS Airchecker