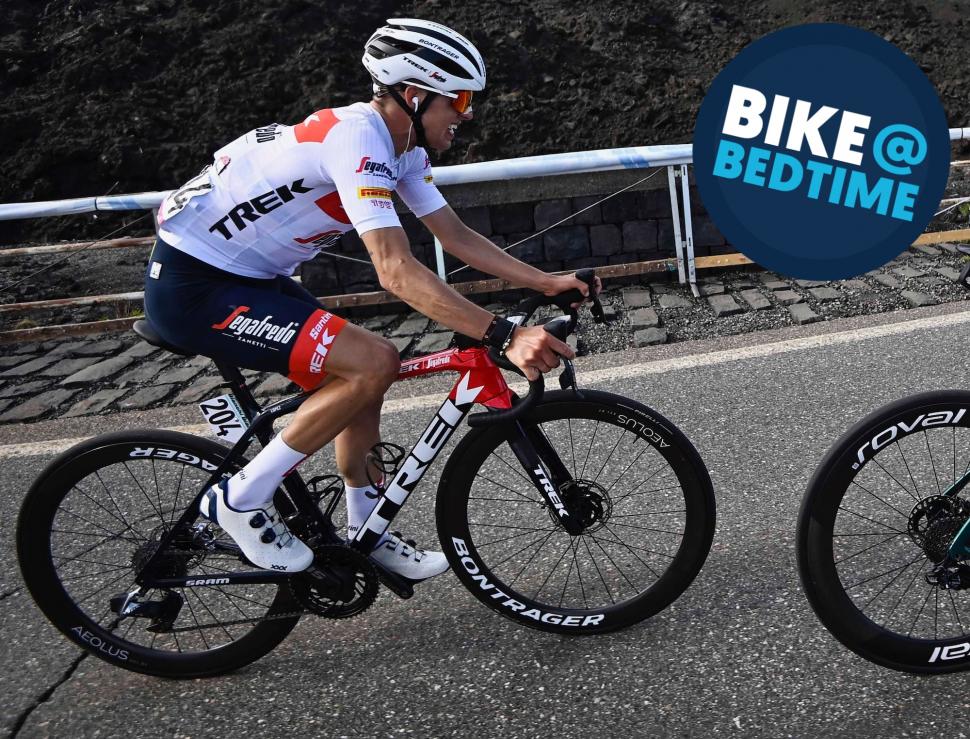 Trek-Segafredo’s young Spaniard has been wearing the Maglia Rosa for a week now, and here’s the bike he has been riding
by Mat Brett

After 10 stages of the 2022 Giro d’Italia, Trek-Segafredo’s Juan Pedro Lopez is still wearing the race leader’s Maglia Rosa (pink jersey), and this is the Trek Emonda SLR that he has been riding for most of the race.

The Spanish rider took second place on Stage 4 which finished on Mount Etna after an error on the final corner cost him the chance of the win, but he’d done enough to take the overall lead.

“I don’t know how many days I will have it, but I will enjoy every moment,” he said.

He has put in some gutsy rides to keep it for a week. 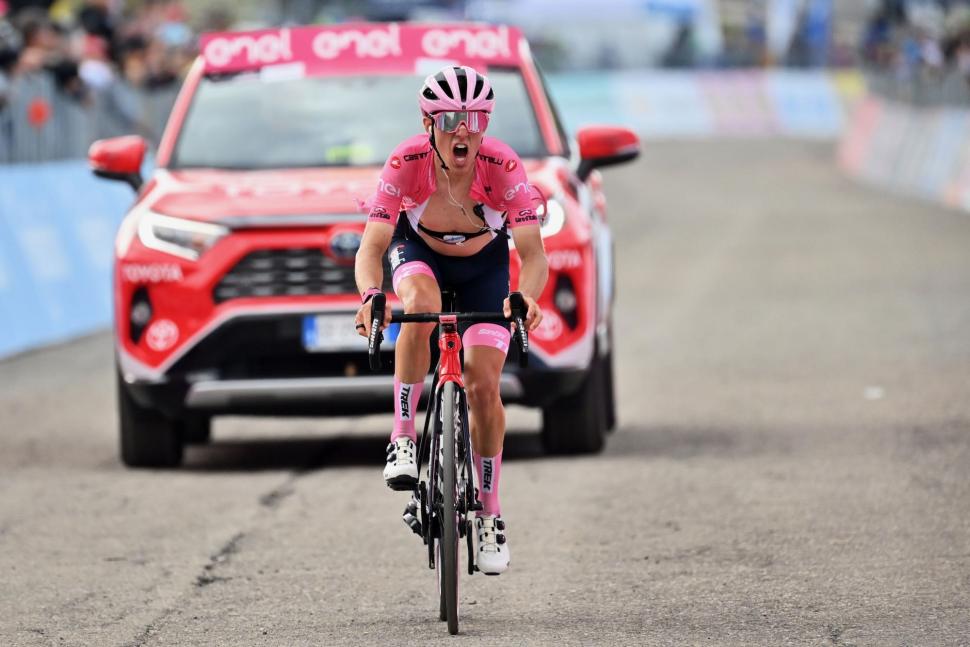 The Émonda SLR has been around for nearly two years now – doesn’t time fly? – with Trek calling this incarnation its fastest climbing bike ever.

The Émonda has always been the lightweight road bike in Trek’s range, but the US brand focused on aerodynamics too in the development of the latest model.

The designers spent most time working on the front end of the bike – the bar/stem, head tube and down tube – because that’s where you can make most aero gains, testing both with and without a water bottle in place.

Trek says that the flagship Émonda SLR platform is 60 seconds per hour faster than its predecessor on flat roads – in other words, on the older bike it would take you 61 minutes to ride as far as you could in 60 minutes on the newer one – and 18 seconds per hour faster on an 8% gradient (Trek’s notional rider is 70kg and puts out 350 watts). 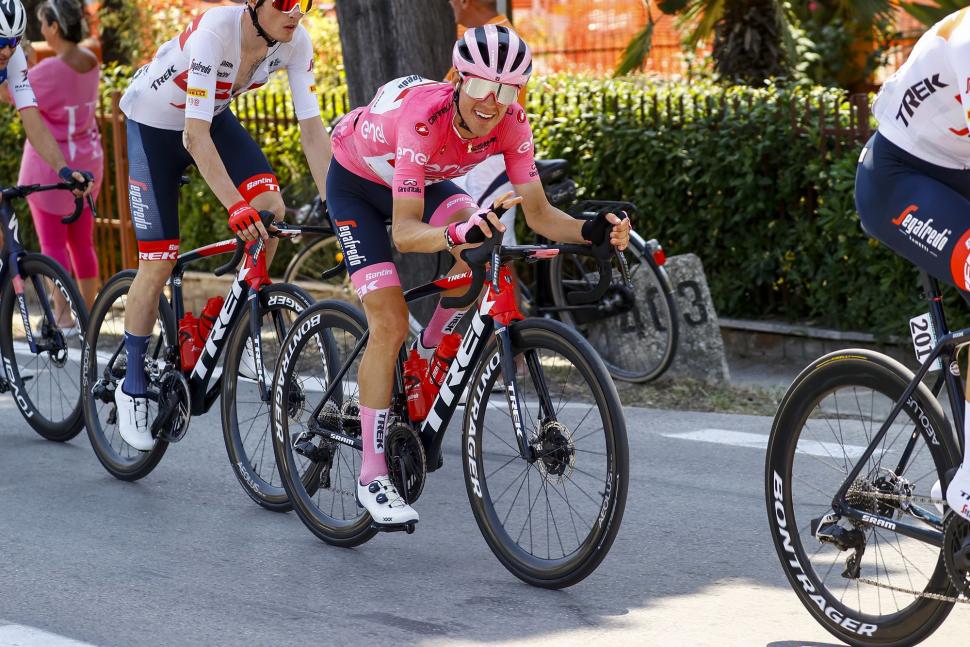 Trek says that in terms of aero efficiency, the new Émonda SLR sits about halfway between the previous generation Émonda SLR and its Madone SLR, and marginally ahead of the Domane.

Using deep-section tubes adds weight over round tubes so the current Émonda SLR that Lopez and the other Trek-Segafredo riders use is slightly heavier than the previous model, but it still weighs less than 700g.

In order to hit its weight, strength and stiffness targets for this bike, Trek says it had to use a new kind of carbon-fibre within the layup – which it calls 800 Series OCLV carbon. 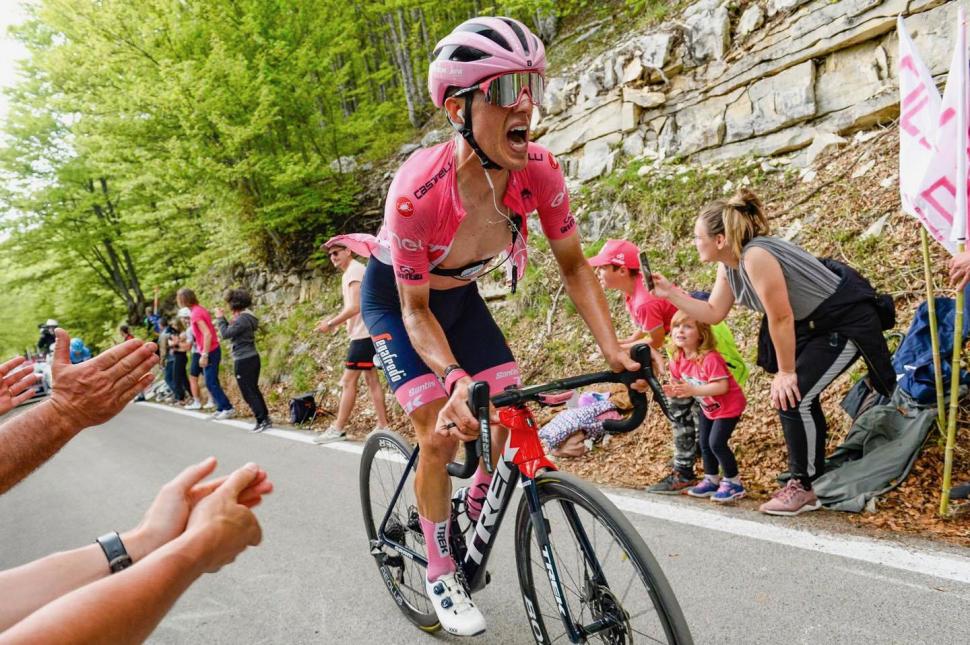 Trek isn’t keen on giving away too many secrets but it says that from a fibre-type perspective OCLV 800 is 30% stronger than the material it uses for its OCLV 700. This material is used in specific areas of the frame where improved strength counts.

Trek-Segafredo riders use handlebars and stems from Trek’s in-house Bontrager brand. This is the Aeolus RSL VR-C combined handlebar/stem that’s said to provide a significant proportion of the Émonda SLR's overall aero benefit.

The profile of the top section is designed to reduce drag, although, as a concession to comfort, the back isn't as squared off as it would have been for the ultimate aero shape. 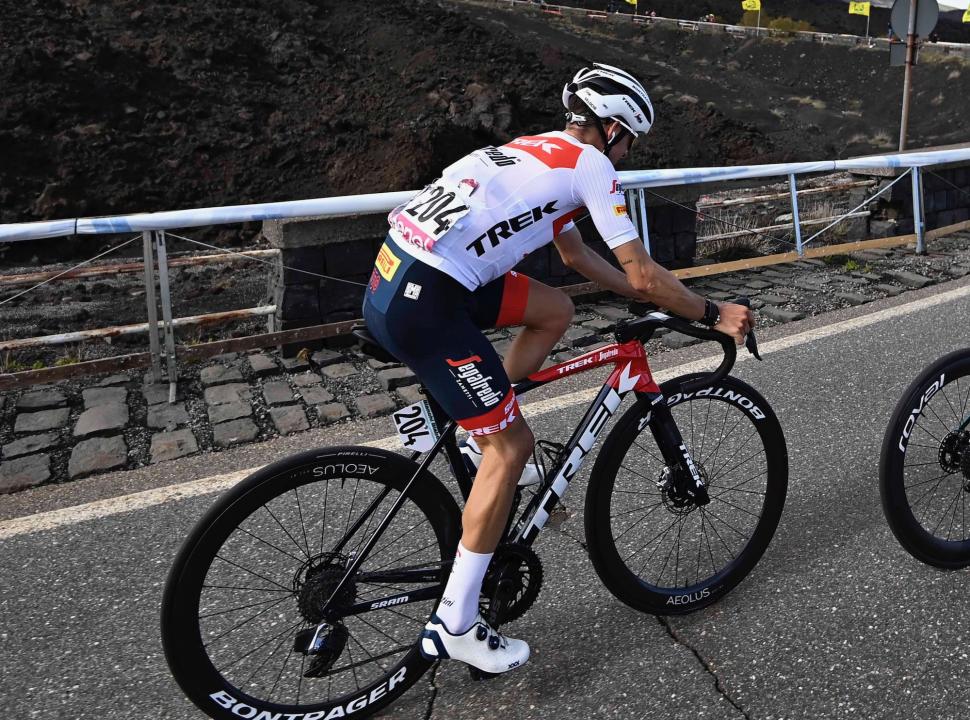 The hoses for the hydraulic disc brakes don't run internally but are positioned in a groove underneath the handlebar section while a carbon clamp sits beneath the stem. This means you can swap the bar/stem without having to re-do the hoses. There are no gear cables or wires to worry about because Trek-Segafredo use SRAM Red Tap AXS groupsets with wireless shifting.

The wheels are from Bontrager. Lopez’s bike is pictured here with Aeolus RSL 51s front and rear – the 51 referring to the rim depth in millimetres. They use DT Swiss 240s internals with Ratchet EXP 36-point engagement.