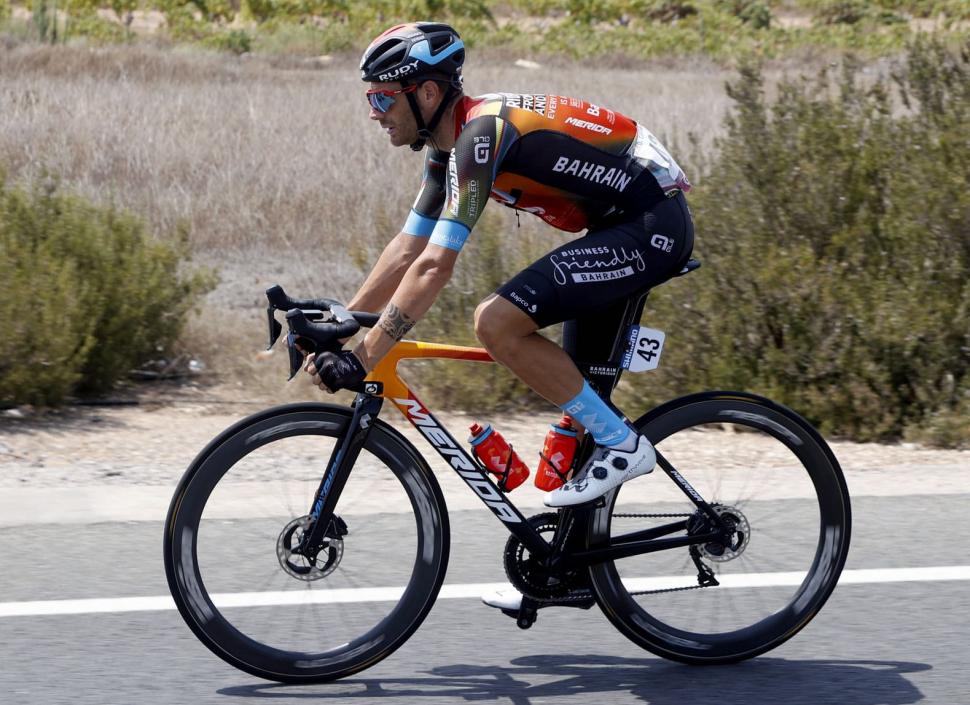 Take a look at a new road bike that has already been ridden to a Vuelta a Espana stage win, despite not having been officially launched yet
by Mat Brett

Damiano Caruso won Sunday’s mountainous stage 9 of the Vuelta a Espana on a mysterious new Merida bike – probably a Scultura – that hasn’t yet been released.

The stage covered 187km (116 miles) and featured over 4,600m (15,100 ft) of climbing. Caruso got into the day’s break and then attacked solo, getting to the top of the final climb before the GC contenders could catch him.

For road stages, the Bahrain Victorious team have the use of either Merida’s Reacto aero road bike or a lightweight Scultura. However, riders have been using a new bike over the past few months that isn’t part of Merida’s current range. Merida’s Scultura 5 has been on the UCI’s List of Approved Models of Framesets for months, so we can be pretty certain that Bahrain Victorious are on this updated bike.

The new Scultura is quite different from the previous model. Most obviously, it has dropped seatstays (meaning that they meet the seat tube at a lower point than the junction with the top tube). Most brands are doing this on their high-end road bikes these days (there are exceptions, such as Trek), saying that it adds a little compliance while reducing the bike’s frontal area a touch.

One other obvious difference is that the new model has fully internal cable/hose routing. This is something else that has become almost (but not quite) universal on high-end road bikes over the past few years. There are a few exceptions, Giant’s TCR launched last year being one example, but the vast majority are going down this route now. The Bahrain Victorious riders use FSA/Vision handlebars and stems with ACR (Aerodynamic Cable Routing) internal routing system.

“The core of the system is built around our headset and integrated cockpit (or stems) that easily allow brands a “plug-in” solution for clean and simple cable routing for their frames,” says FSA. “By using standard headset dimensions, the system maintains frame strength and, by routing cables through the headset, it also safely preserves a round steering column that is free of drilling.”

Read our review of the Merida Reacto Team-E 2021

Merida hasn’t added depth to the down tube or integrated the fork crown on the new Scultura, and the seatpost still looks decidedly skinny, so it hasn’t gone all-out in pursuit of aerodynamic efficiency here. Many lightweight bikes from other brands have been given the aero treatment in their latest revamps – the Specialized Tarmac SL7, Trek Emonda, Bianchi Specialissima, and so on – so it’ll be interesting to hear what Merida has to say on this when it finally launches the new Scultura.

When will that be? A bike that’s ridden in the biggest races of the season is never going to be far from an official unveiling, brands always looking to surf the wave of publicity. Seeing as autumn is just around the corner (sorry to break it to you so bluntly) we’re almost certainly talking about a launch in the next few weeks.