Reels of thread are spinning around one another in a miniature maypole dance. Follow the threads along and you see that what’s chugging off the top of the pole, millimetre by millimetre, is one continuous tube of carbon fibre, flattened through a couple of rollers. This is one of the things that makes a Time frame different.

We’ve come to visit Time in Vaulx-Milieu, just outside Lyon, France, to see how they do things here. The brand was founded by Roland Cattin back in 1987 to make pedals, for which it’s still best known. They’re produced 150 miles away in Nevers, but we’ve come to find out about Time’s frames that are made on this site. 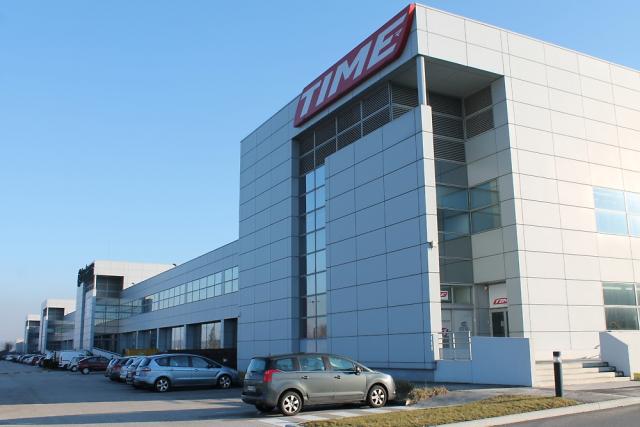 Now, before we start, we’ll make it clear that we have nothing against carbon monocoque frames made in the Far East, it’s just that that’s not what Time do. They’re offering something different. 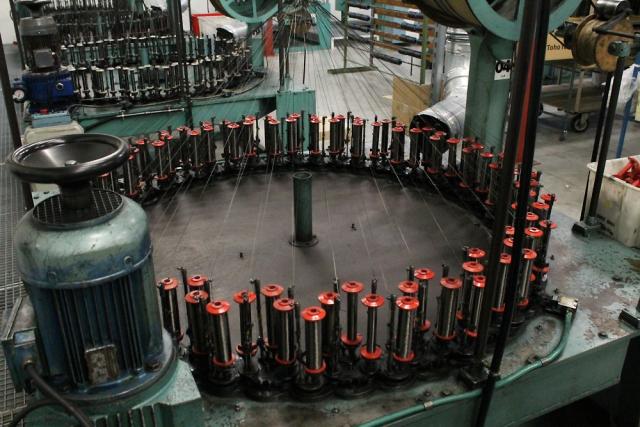 For a start, Time make all their frames themselves right here in France, which is unusual enough in itself. On top of that, they use technology that’s unique to them within the bike industry. As you might know, most carbon-fibre frames are made using pre-preg carbon. That means that sheets of woven carbon fibre have been pre-impregnated with a resin during the manufacturing process. The frame manufacturer cuts up the carbon sheets, arranges the various pieces in layers inside a mould, an inflatable bladder is put inside to force the carbon against the sides of the mould, and the frame is essentially baked under pressure. Yes, that’s a very simplified description of what happens, but the point is that Time don’t do it that way. Instead, the carbon fibre arrives as thread, on big spools. They transfer it to smaller bobbins and then weave it themselves. 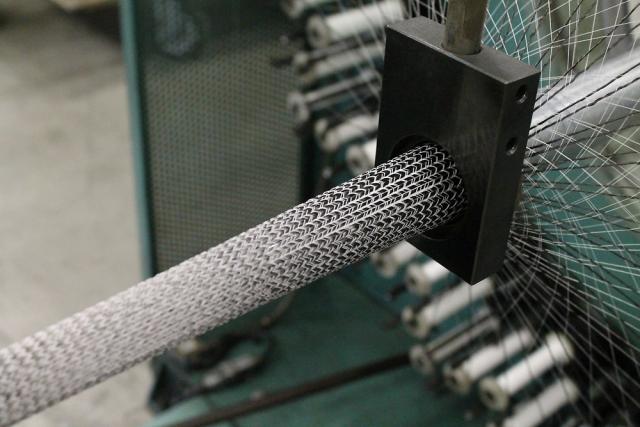 The threads cross over one another to produce a giant spider’s web that then gets tensioned and shrunk down to make a tube of carbon fibre. The guys at Time call it a sock – well, I guess they call it ‘une chaussette’ (did I get that right, Mme DuBois?) – although it’s many metres long. And there’s no heel or toe. It’s still flexible at this stage – there’s no resin in here yet, remember. 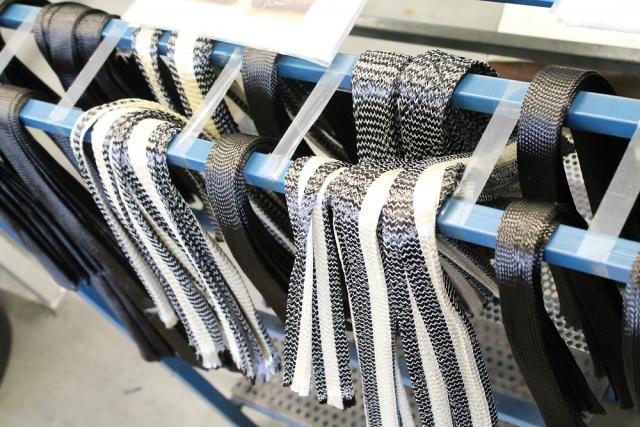 Time vary the orientation of the fibres in the weave to determine the characteristics of the section of frame the tube will eventually become. The lower the angle between the fibres, the less flex. The higher the angle between the fibres, the more torsional rigidity. Where required, they can also weave in other fibres. For example, they use Vectran – a form of polyester – to absorb vibration. Plus, they use different numbers of fibres to produce different socks, and then layer different sections of the frame in different ways, putting one sock over another to get the characteristics they're after. All in all, there are lots of variables involved in tuning the performance and the feel of the frame. They know a thing or two about weaving around these parts. Interestingly, Lyon used to be a big silk-weaving city – you know, back in the olden days (maybe ‘interestingly’ was a bit strong). I’m not saying they’ve passed the knowledge down from father to son or anything but… Actually, forget this paragraph ever existed. Let’s move on. 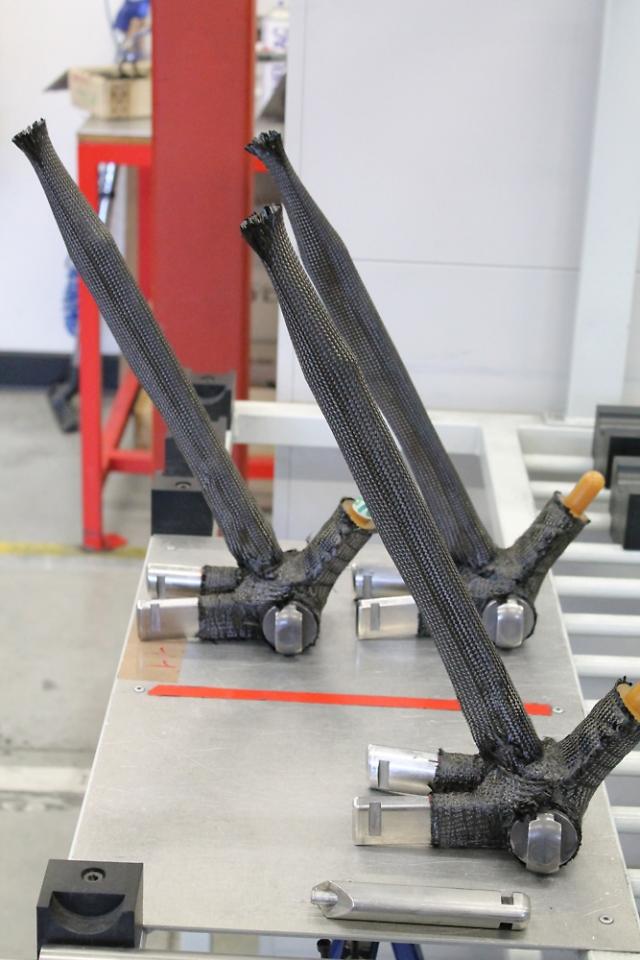 Next, the carbon fibre socks get put onto a wax version of the frame – different numbers of layers for different areas of the bike, with various other sections of carbon cloth added where required.

The fact that the base structure is wax is important; it will eventually be melted at the end of the process, and drip out. It smells like beeswax (although it isn't) and it’s soft enough for you to score with your thumbnail. 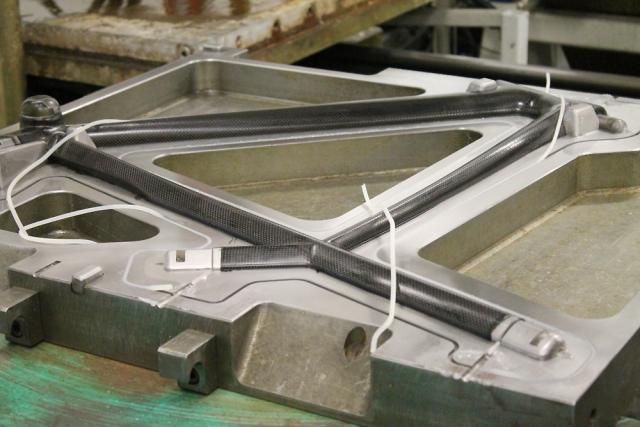 In the next room the frame goes into a CNCed aluminium mould that’s clamped together super-tight and slung onto a machine that adds the resin. That resin is forced in at one end and the machine keeps pumping it in there until it flows out at three points on the other side. Once it starts re-emerging with no more air coming out, it has infused right into the structure and it’s job done. The resin then heat-hardens in the mould over 20 minutes before the frame is ready for serving. 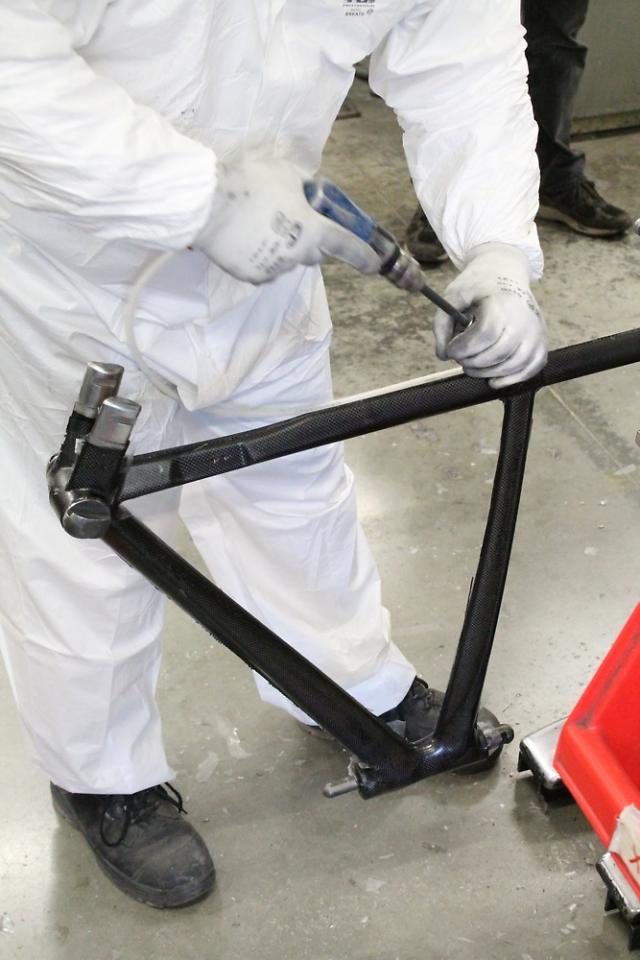 What’s surprising is that this key part of the production is done by one man on one machine. Mass production, it ain’t. This is one of the reasons why Time’s production is limited to just 70-90 frames per week.

Okay, that’s all well and good but what difference does this method of production make to the bike you end up riding? Time give these benefits:

• Weaving the carbon into tubes ensures a homogenous structure.

• The crossed fibres provide resistance to cracking. That’s especially important around bottle cage bosses and other areas that are drilled.

• If you crash, the woven fibres won’t shatter as unidirectional carbon fibre can, helping to avoid additional injury.

• The weaving allows Time to control the behaviour of the each part of the frame through the orientation of the fibres (they can be angled against one another anywhere from 0° to 70°) and by including different types of fibres. 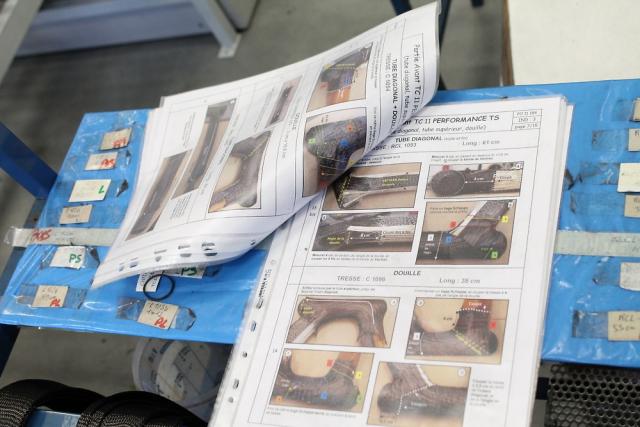 When it comes to the RTM bit – forcing liquid resin in once the carbon has been arranged on the temporary wax structure – Time list these advantages:

• Excellent impregnation of the fibres.

• Perfect cohesion of the layers of carbon.

• Guaranteed geometries and thicknesses of the frame walls.

• The ability to produce complex designs. 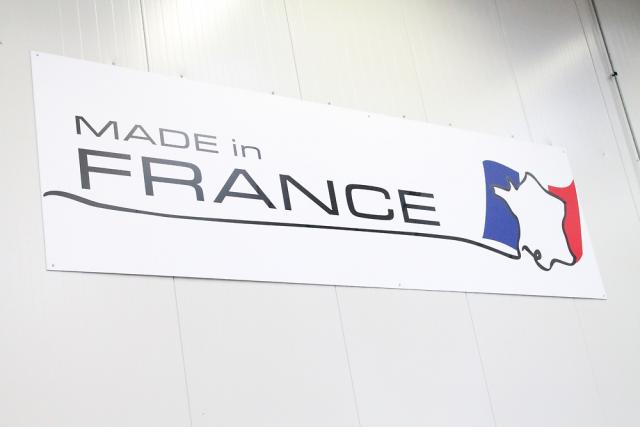 As I said earlier, Time is the only bike brand to use the RTM production technique but they’re keen to point out that it’s used in other industries by the likes of Ferrari, Lamborghini – prestige brands.

Time see themselves as that sort of company. They want to be the Aston Martin of the bike world, making high-end, premium products. They’re not going to churn out big volumes, but instead want to emphasise quality. To that end, they’re launching Time concept stores – the first of which they aim to open in Paris later in the year. They’re hoping to have between four and six of these stores in France’s biggest cities, and then others in the US, Japan, Germany, Spain, maybe London… Major cities around the world.

The idea is that you’ll be able to go along for the ‘Time Experience’. Everything will be displayed with style, you’ll ride a Time frame built up with components from partner brands – Lightweight and Mavic, for example – wearing X Bionic clothing provided by them. You get the idea – the opposite of mass market. Exclusive. Another technology that Time use in their frame production is called CMT – Carbon Matrix Technology. They use this to make small, lightweight parts like dropouts and parts of the stem, including the faceplate.

The carbon comes in small rectangles, a few inches each way, every one composed of short strips of carbon at various angles. They’re rolled into tubes and cooled in a -18°C freezer, then pressed into moulds under very high pressure. The carbon is heated up to 100°C and stays in there for a few minutes – 600 seconds for a dropout, for example.

I’d show you a picture of how they do it but, alas, no cameras are allowed in this bit. Sorry about that. It’s all Top Secret. Apart from that stuff I told you before, obviously.

It’s all very precise too. If they put 1g too little carbon in the part won’t be formed correctly, 1g too much and they could ruin the mould. And they can’t prepare enough of the carbon for a week’s production in one batch because it can’t be stored for long. They have to make it up and use it on the same day because it has such a short shelf life. Like raw fish.

The idea is that the fibres form into one whole in the mould, preventing cracks from spreading and improving the lifespan of the product. Plus, CMT allows Time to make very lightweight parts. An aluminium dropout they had there weighed 16g while a piping hot CMT one straight out of the mould weighed 11.79g. Four and a bit grams obviously isn’t worth worrying about too much, but the accumulation of small weight savings around the bike can add up to something significant – the old ‘aggregation of marginal gains’ thing. I could go on all day about the production process but the RTM and CMT technologies are the key USPs, TBH. Of course, there are other essential processes involved too: sanding the frames down, for example. Each one is done by hand and takes 45mins. It’s a filthy job that doesn’t look a whole lot of fun. 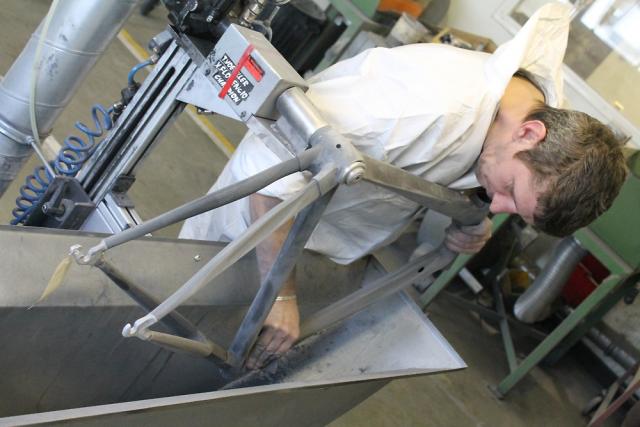 Then they get painted, stickered up, and lacquered... It’s a labour intensive process. Time build up the framesets into complete bikes for the French market too, although not for the rest of the world. Again, each is made by one bloke, one at a time. He gets through about six bikes a day. Naturally, everything gets checked. The French call this metrology. It’s the same word in English but we’re more likely to call in quality control. Whatever you decide to say, it’s a room full of machines testing stuff. Frames, forks, handlebars, seatposts… there’s more flexing going on here than in a whole chain of gyms. 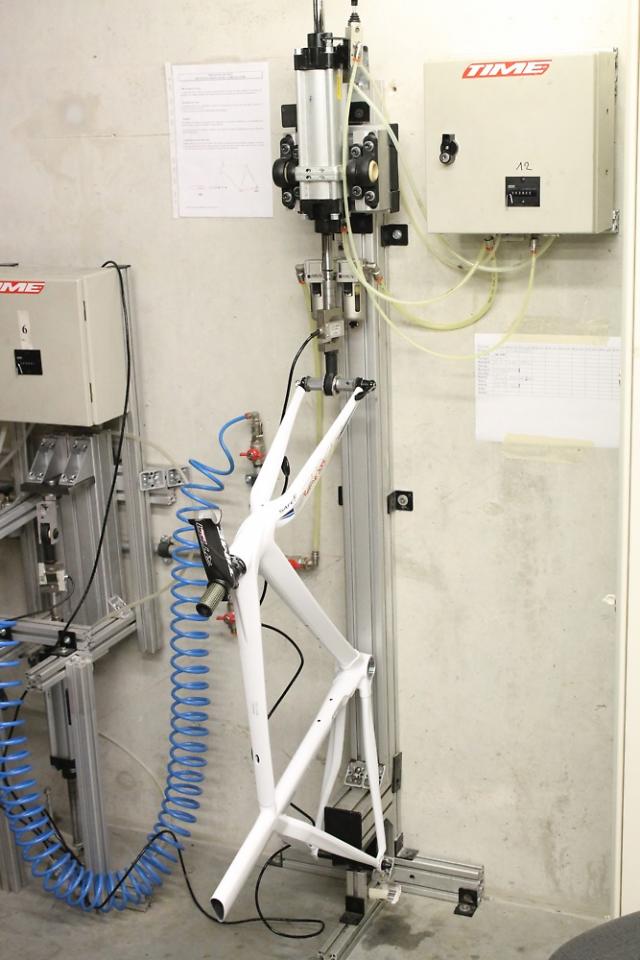 So, that’s how Time take a bunch of thread and resin and turn it into a bike frame. The proof of the pudding, though, is in the eating. It’s time (ahem!) to saddle up and hit the road aboard a VRS Fluidity… We’ll run a First Ride on road.cc shortly. 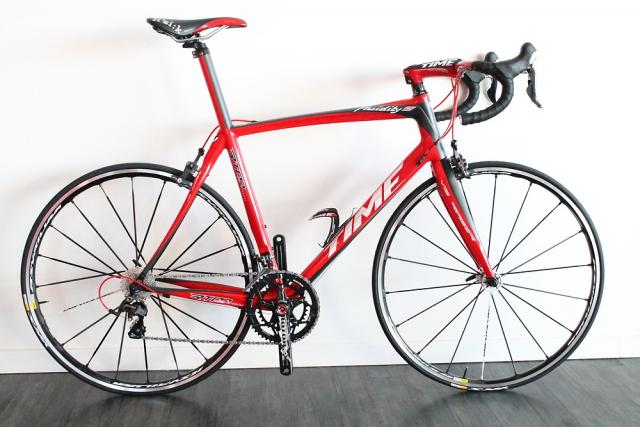 For more information go to the websites of Time and UK distributor Extra.