Rumours of alloy’s death have been greatly exaggerated, according to Dom Mason of Kinesis UK. We caught up with him to take a look at his new aluminium road bike
by Mat Brett

Look at a lot of bike ranges these days and you’d think that carbon is the only material out there for decent-level bikes, but Kinesis UK’s Dom Mason reckons there’s plenty of scope left for quality metal frames.

Kinesis is a Taiwanese brand but Kinesis UK, based in Brighton, design their own bikes to cater for the UK market, and that’s where Dom comes in. He’s the man with the ideas and the sketchpad. Dom has been designing bikes for 12 years now and Kinesis UK have built up a loyal following. The range has also been hugely influential.

We caught up with Dom to find out why he thinks metal bikes, in particular alloy bikes, still have plenty of relevance today, and to take a look at a prototype Kinesis UK aluminium Racelight Aithein road frame that he thinks proves the point…

road.cc: With most of the bike industry concentrating on carbon, the Racelight Aithein road bike (pictured below as a Photoshop mockup) you’re about to bring out is alloy. Why’s that?

Dom Mason: I’m not really a big fan of carbon. It doesn’t make me very excited from an engineering point of view. It’s brilliant for many things, but it’s certainly not the be-all and end-all of frame design. My thing is to push alloy really hard. All the brainpower has been going into carbon, but there’s more that we can do with alloy. 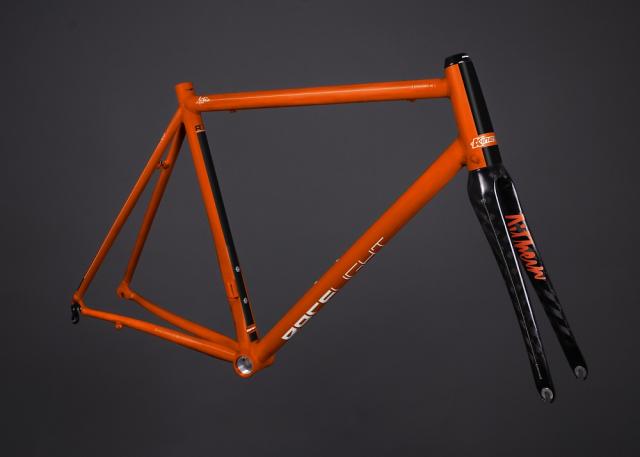 Two years ago I knew the Racelight KR810 was getting long in the tooth so I thought, “Let’s start pushing alloy development”.

Material development pushes everything else. Now we have superplastic forming (SPF)…

Previously, we used hydroforming quite a lot for road bikes. Hydroforming uses heated oil at pressure to shape the tubes inside a steel former – quite a high pressure with not much heat on the tube. You can make nice functional shapes so you can get rid of gussets and stuff, but it doesn’t really deliver tubes that are any lighter.

It’s difficult to control hydroforming. It can split tubes so you have to make them quite thick. It’s brilliant for things like full suspension downhill mountain bikes, but it isn’t so good for making lighter road bikes [the white frame in these pics is a prototype - Ed]. 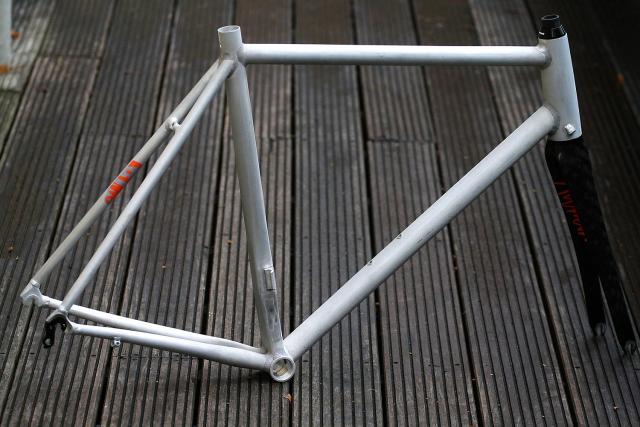 With superplastic forming (SPF) the alloy goes into its ‘plastic’ phase, so we can use lower pressures and tune the tubes more. It uses heated compressed air in a steel mould, the tubing is at a far higher temperature and you can use thinner walled tubing because you can control it much more finely. That allows us to push what we can do. SPF is a Kinesis International patent, so the great thing is that it is exclusive to us.

So, for example, we can now make a carbon-weight fork from alloy at a fraction of the cost. You had to bond the legs onto a solid crown before. Superplastic forming means you no longer have to do that. You can make both legs as one piece, so you can save weight.

What you were aiming at with the Racelight Aithein?

I wanted to do something that looked classic with the advantages of a carbon bike and a similar performance, but in alloy. I wanted it to look like it had been welded together. There are a lot of people out there who don’t want bumps and bulges, they want something that’s fast and classic looking. 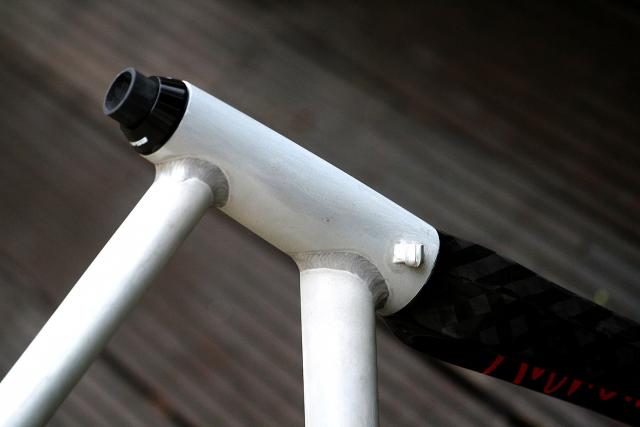 Superplastic forming has allowed us to make an asymmetric seat tube, for example, that’s really thin walled but wide at the bottom bracket. That bottom bracket is BB386EVO standard to make the frame stiffer down there and make it most compatible. It has all been tested for EN standards, where we bend it backwards and forwards 10,000 times, and it has passed.

THE PEDALLING TEST from Kinesis Bikes UK on Vimeo.

The geometry is pretty racy with fairly short chainstays, straight seatstays and a low bottom bracket. The frames will weigh about the same as carbon frames from a few years ago – about 1,200g for a 56cm – and the fork will weigh 330g. The finish is anodized for durability and weight saving and the graphics are laser etched. We’ll have stock for April.

Who do you think will buy the Aithein?

I see it as for a person who is serious about their bikes and who likes going fast. They like riding with their mates but they aren’t necessarily going to spend every weekend racing. 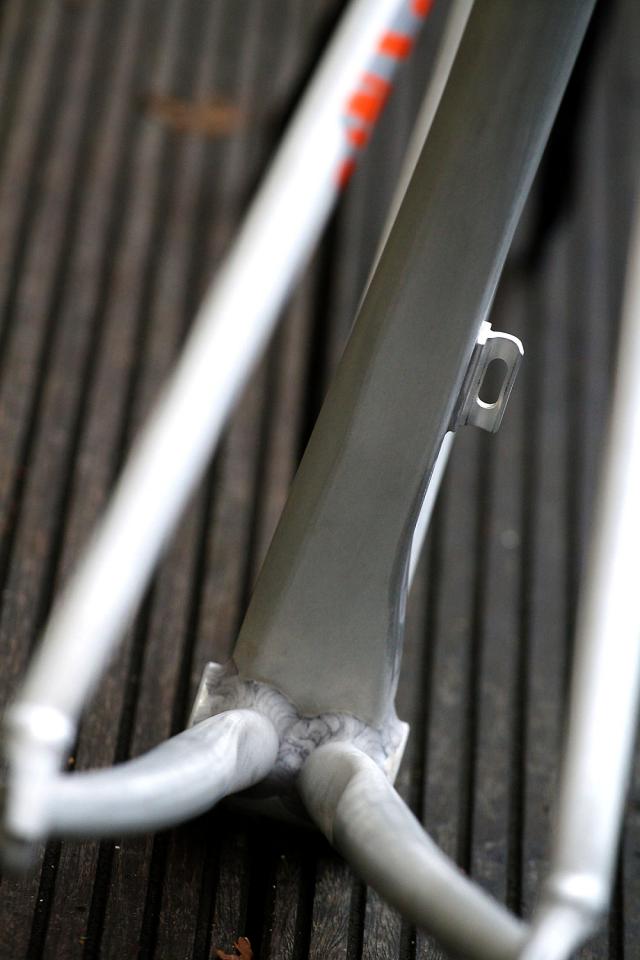 It’ll cost about £649.99, for a frame, monocoque tapered fork, headset and seatpost clamp. It’ll allow people to build a nice, light bike for not a lot of money.

The new Kinesis Racelite TK3 just did really well when we reviewed it on road.cc and made the top 10 in our Bike of the Year. What do you see as the key features of the new design?

The geometry has stayed the same as that of the TK2. I wanted to make it a proper evolution of the TK2 because I know people like that design and I didn’t want to mess it up. People saw the TK3 was coming out and sold their TK2 from last year to get ready for it. I didn’t want people going from one to the other and it feeling odd. One of the important things is that you now get a tapered head tube and fork steerer. It was 1 1/8in before. Now it’s 1 1/8in at the top and 1 1/2in at the bottom. It’s a logical evolution. It makes the bike track better, feel much happier when you’re going fast downhill and stomping uphill out of the saddle. It just feels better.

The Tracer 1.5 fork comes with a long drop height and it’s monocoque carbon with mudguard eyelets. Now the front end matches the rest of the tubeset. It’s much better balanced and, I think, the best it has ever been.

How important is it that you can fit mudguards?

No one else in the world does a winter bike, really – only the British. When I originally told Kinesis that I wanted to do a road bike and put mudguards on it, they couldn’t get the idea. 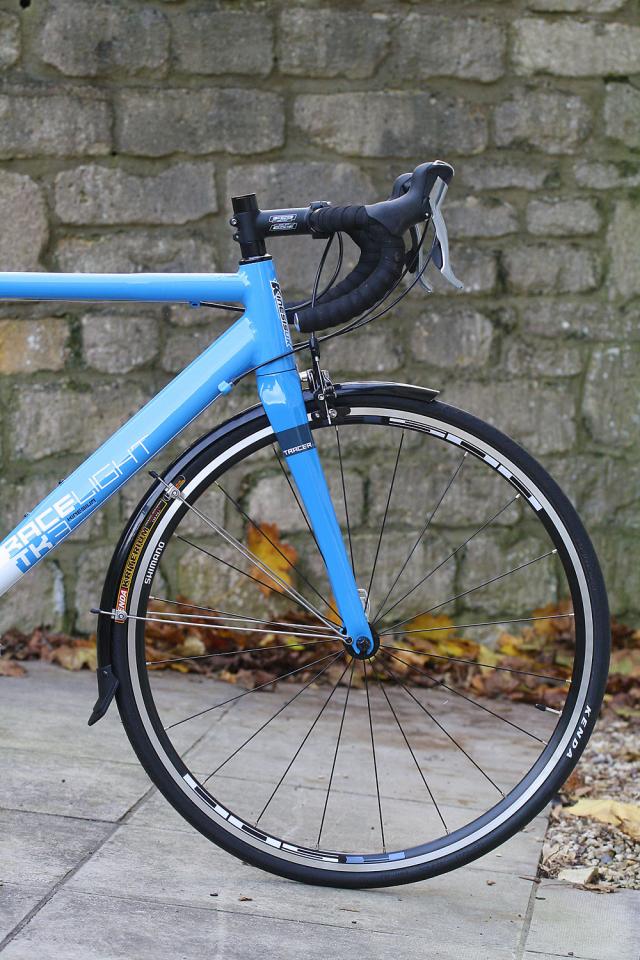 People get so excited by their winter bike, especially the TK3. People buy their best bike and it’s exciting but they haven’t put anything of their own on it. But their winter bike is their chance to say, “I should use these wheels and these tyres. What bar tape should I put on? These are the mudguards that work best…”

What we’re really about is people buying a frame and fork and making their own thing. They get to build a bike, and they’ll probably use it more than their best bike, getting more miles and more hours on it.

The Crosslite cyclocross bikes have had a major impact over the past few years. Why do you think they have been so successful?

I didn’t realise but someone said to me the other day, “Those Crosslights helped to change the way cyclocross was in the UK.”

I approached them from a completely naive angle and having no respect for anybody like Pinarello or Alan because it wasn’t my scene in those days. I’m from a mountain biking background. I realise now that that was quite a good angle because I didn’t care what people had done before. I wondered why people were making cyclocross bikes with no clearance, lugs, and flexy little tubes. Let’s make it like a mountain bike so that people can actually ride it. What developments are there in the cyclocross range?

The big change with the Crosslite EVO5 is that it now comes with a new head tube and a tapered fork. The frame has an Easton down tube and seat tube, and a Kinesis top tube. The tubes were always really good but the fork was holding it back a bit before. 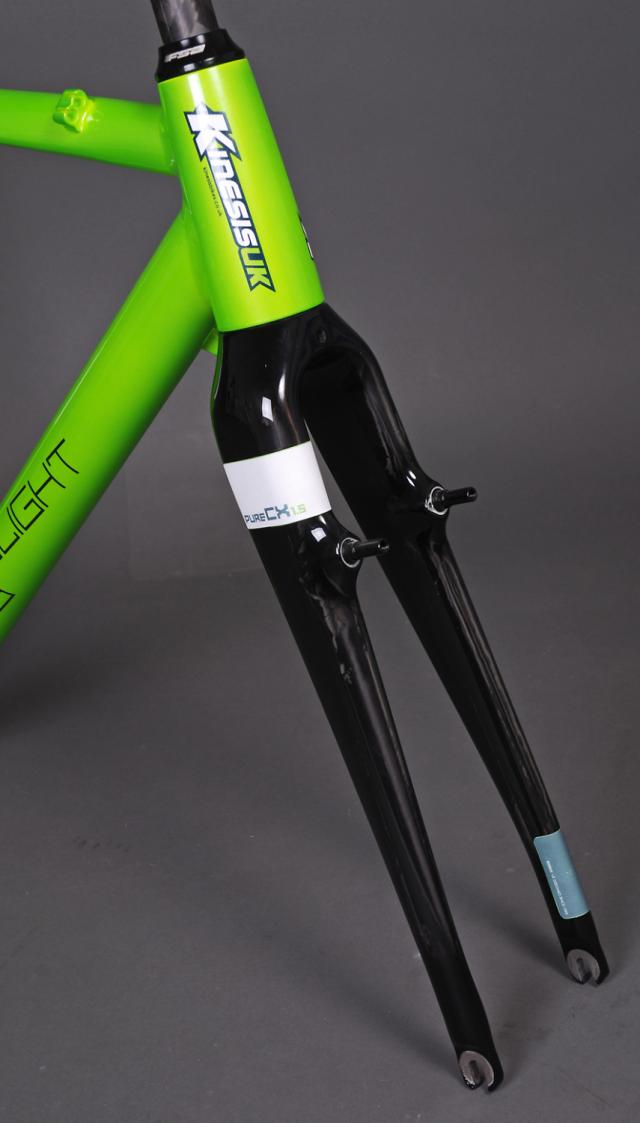 The new disc-brake Crosslight Pro6 has been a phenomenal success. We couldn’t get enough of them when we launched it.

What else will be coming from Kinesis soon?

We’re working on a new disc-compatible, all terrain, titanium frame, called Tripster ATR (pictured below - a Photoshop mockup). ATR stands for ‘Adventure, Tour, Race’. I wanted something that was a little bit sporty, for going a long way on, for doing a bit of off-road on – stuff like the South Downs Way.

It will have a geometry a bit like a Racelight’s but with slacker frame angles, a lower bottom bracket and longer chainstays, so it’ll be stable, comfortable and suitable for going miles on. It’ll also have clearance for 40mm tyres. The idea is that it’ll be a bit like a new school mountain bike in that it’ll be slacker and longer. I’ll be advising riders to drop the stem length because the slacker head angle will stop it being twitchy and will add toe clearance for ’guards and larger tyres. 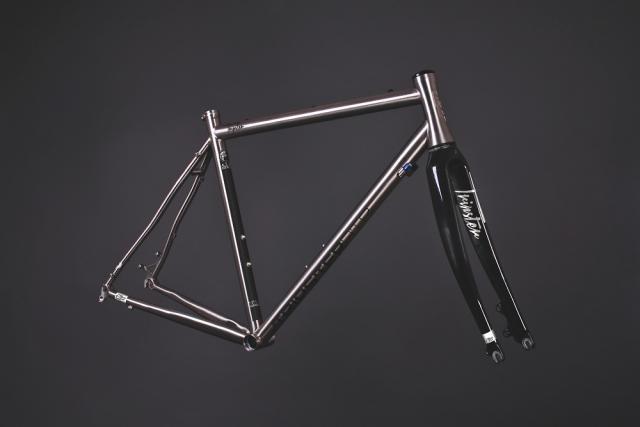 We’ve had the disc brake mount and dropouts specially made for us and it has rack and mudguard eyelets. It fits in that ‘gravel-racing’ niche, but with mudguard mounts.

You could use it as a cyclocross bike and put cyclocross tyres on it, but it’s not like a true CX bike. I see it more as a distance machine that has a bit of fun to it, and being titanium it’s going to last a long time.

Kinesis UK will be exhibiting at The London Bike Show, Excel, January 17-20