A Ride Down Under

As winter turns to spring in the UK, in Australia it’s the other way around. David Else joins a late season sportive in the Land Down Under
by David Else

To sunny Australia, where another assignment (your humble author also covers travel) auspiciously coincides with the chance to take part in a local sportive. Except it’s not called a sportive, and it’s not that sunny either. What should be a beautiful late summer morning on the surf-kissed beaches of Victoria is more like an autumn day somewhere near the North Sea.

But no matter. The cold and misty conditions haven’t dampened the enthusiasm of 3500 cyclists gathered here in the little seaside town of Torquay, to the west of Melbourne, for the start of the 2XU Great Ocean & Otway Classic Ride.

Win pin on our numbers (but this event doesn’t use timing chips) and then start in waves according to expected completion time. I’m riding with a couple of local buddies who’ve put themselves (and me) down to cover the 145km course in around 5 hours. No hanging around then, but hopefully enough time to take in the scenery.

The first section of the ride takes us inland through the little settlement of Bellrae then across rolling farmland on dead-straight country roads. There’s no car traffic, as these roads are closed to vehicles for a few hours as the main waves of riders come through.
In the town of Moriac we turn southwest on the Cape Otway Road. Unfortunately, we start heading into a chilly wind and a few spots of rain. Fortunately, we hook up with a crowd from the Eastern Vets cycling club. Some good-quality group riding (plus some lively conversation) help the miles pass quickly. Our steady speed means we scoop up other riders battling into the wind, and at one point we’ve got a peloton of about 100 cruising through the landscape.

With about 60km done, a highlight is spotting Phil Anderson passing in the other direction. A lowlight is a serious downpour that breaks up the big bunch as riders stop to put on rain jackets.

But the rain doesn’t last for long, and soon we reach the town of Deans Marsh. We’re now about halfway round the course, and there’s an official feed station, although the only items available are water, ‘lollies’ (what Aussies call sweets) plus Ascend recovery bars and drink – which seems an odd choice with the finish, and the prospect of recovery, still 70km to go. But the bars are tasty, and wolfed down by many riders. Others take advantage of the local roadhouse and go for coffee and cake instead. 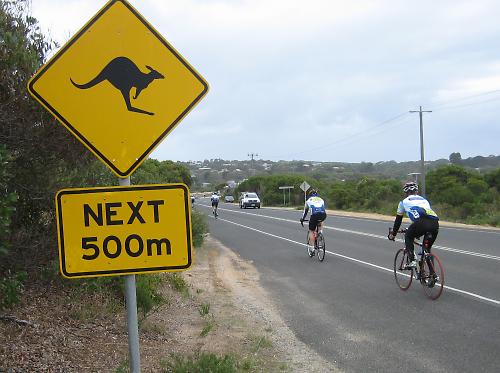 The next section of the ride is 8km of climbing over the Otway Ranges, a long line of forested hills separating the prairie-like inland countryside from the slightly more tropical coastal region. It’s a steady ascent, with the road twisting up through the trees, and there’s even a pair of local lads in devil outfits to lend a touch of Tour de France atmosphere.

A swooping descent on the other side leads down to Lorne, where we turn northeast and finally have that wind behind. Even better, we’re now on the Great Ocean Road, the scenic highway that follows the coast, and stars in a thousand Australian Tourist Board adverts. The sky is still grey, so we’re not seeing the scenery at its best, but the big rollers hitting the beaches are impressive, and the road is dramatic as it hugs the ochre cliffs. On a downside, the road is no longer closed and we share the view with passing traffic. (“Watch out especially for those V8 utes [big pick-ups]” says my buddy, “they’re a cyclist’s worse enemy.”)

So we stay alert for impatient drivers as the Great Ocean Road takes us through Fairhaven and Anglesey. As a Brit abroad, it’s great to see the familiar names, especially when such disparate places at home are lumped side-by-side over here.

The final section of the route loops inland away from the coast, and provides a few final hills to before returning to Torquay, where there’s a finish arch, cheering crowds, goodie-bags and a few trade stands.

Despite the rather inclement weather (though, for a Brit, nothing unusual) it’s been a great ride, and a great way to stretch the legs before getting on the plane home next day.

[update] I’ve been back in Blighty for a few weeks now. With time to reflect the ride, it’s worth commenting on some of the differences between this Australian event and the UK sportive scene.

First, the closed roads were very welcome. In an ideal world, it would have ben great if the busiest section along the Great Ocean Road was closed as well, but that would probably be unrealistic for such a major route.

Second, the lack of timing chips seemed to give the day a more relaxed atmosphere. There were a lot more people stopping at cafes along the way than you might find in a UK sportive – more like a UK audax in that respect. 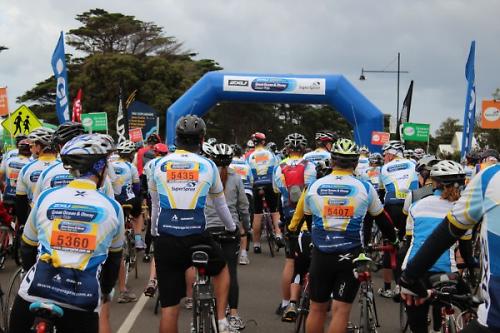 Third, the obligatory jersey. To prevent people joining the ride without paying the entry fee, all entrants have to wear the official event jersey (as well as numbers on bike and helmet). It’s a good idea from a crowd-control perspective, but it makes it very hard to spot your club-mates in the bunch. And that brings me to the entry fee itself: at A$150 (about £100), including the obligatory jersey, it still makes even the most expensive UK sportive seem good value.

If you’re heading for the land down under (or if you’re one of our Australian readers), for more details on other events from the Great Ocean & Otway Classic organisers, see www.supersprint.com.au

And finally, a personal note. As mentioned at the top of this article, I cover travel for various publications, including guidebooks for Lonely Planet. On this Great Ocean & Otway Ride several members of staff from Lonely Planet joined other cyclists from Melbourne and Geelong to raise sponsorship money for a charity called Step of Hope, set up to help a colleague called Martin Heng, who was knocked off his bike by a car when commuting to work and is currently quadriplegic. Martin is slowly recovering, however, and all funds raised go to more intensive physiotherapy that will hopefully one day allow him to ride a bike with the rest of us once again. For more details see http://sites.google.com/site/mhstepofhope/home