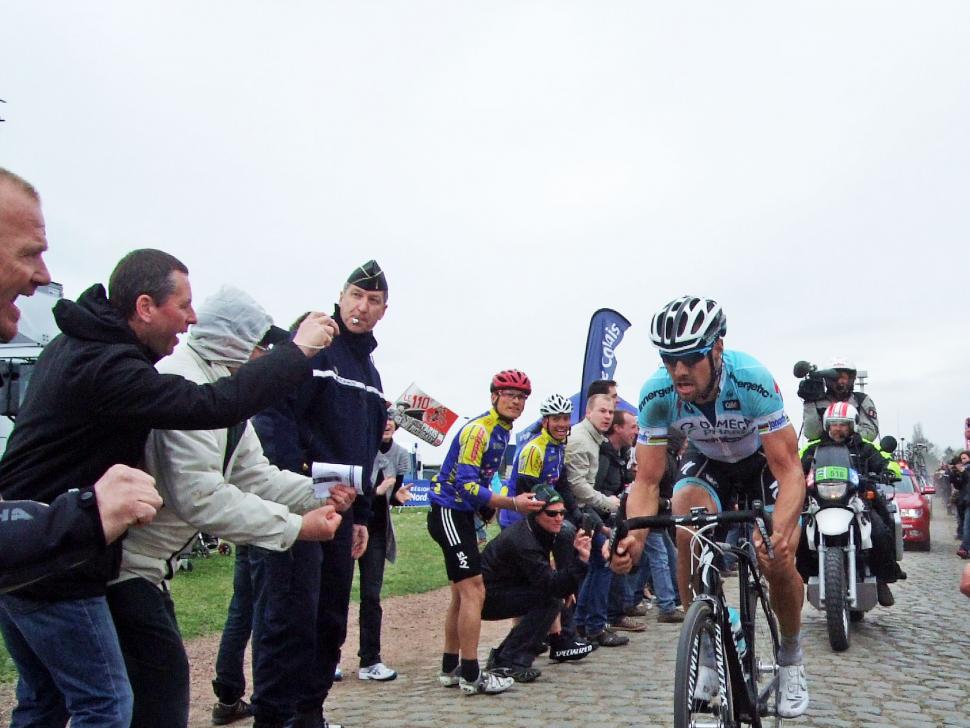 Le Carrefour de l’Arbre is a cobbled farm track which indirectly links the two villages of Camphin-en-Pevele and Gruson, near Lille in northern France. I imagine on most days it would be deserted, alone and unseen from no more than a few metres across the flat agricultural landscape, especially when the crop is high.

You’d see tractors or other farm vehicles bouncing over the uneven pavé, maybe you’d see the odd walker strolling, there may even be a cyclist going who-knows-where, clattering noisily over the widely spaced and uneven stones. All in all though, I guess it’s a quiet place, foreboding under the heavy skies of winter, joyous when the skylarks sing above. This is one of many such quiet tracks in this part of northern Europe, though this and some others are lovingly maintained by a dedicated group who are committed to their upkeep. Why? Because this is hallowed ground. For these are the cobbles of one of the World’s most famous and arduous bicycle races: Paris-Roubaix. The Queen of the Classics. The Hell of the North. 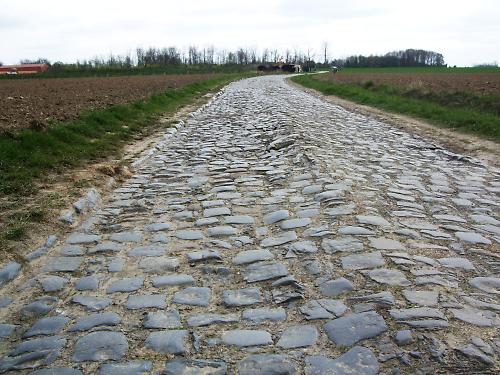 Walk along the Carrefour de l'Arbre on the early morning of the second Sunday in April and you'll see the  fabric advertising barriers fluttering in the spring wind on the right-angled bend half way along, and outside the Restaurant de l’Arbre there will be sponsor’s flags and perhaps an intimidating looking doorman. Already small groups of people will be setting themselves up for the day ahead. Deck chairs erected at prime viewing points, the odd barbecue if the weather is favourable, packed lunches, flasks of coffee and bottles of beer. Some will be wearing cycling jerseys or cloth cycling caps - casquettes - their peaks turned up, emblazoned in the colours of their favoured rider or team. But it will be quiet still. Stand a moment and you will feel the atmosphere whipping across the cobbles like the breeze which bends the short green shoots of winter wheat that surround you. There is soul here. There is history to be revered. This place brings flutters of excitement for hours, the depth of anticipation building to a crescendo before, at last the race passes.

The race approaches and the crowd builds. People mill around, some watch the big screen, others scan the horizon for the TV helicopters which buzz above the distant trees and fields, a tell tale sign that the race is approaching. Gendarmes stand in ones and twos, chatting amongst themselves. The promotional caravan has passed, leaving behind coloured plastic trinkets, thrown from contrived vehicles by bored but attractive young women. The only traffic on the pavé consists of the advance party: photographers motorbikes, the odd team car stops on the main road, preparing bottles and spare wheels for their riders. Kids gather round hoping to cadge a souvenir, while their parents look on. Now Gendarmes speed along the cobbles, standing on the foot pegs of their off road motorcycles, blowing hard into whistles, warning of their coming. The atmosphere is tense. We know what is happening; the screen is showing the race as it unfolds. As the riders get closer it seems strange seeing via the TV cameras just what is kicking up the plumes of dust we see across the fields. Soon they will be here. 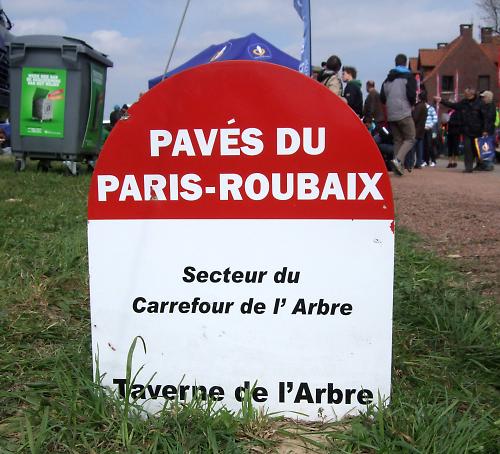 First run in 1896, Paris-Roubaix is one of the five Monuments of road racing, one day races which have entered into legend and captured the hearts and imaginations of fans. Roubaix is an unremarkable small town just outside the city of Lille in the industrial north of France, the French part of Flanders. The race was born after two Roubaix businessmen decided a road race from Paris would be the ideal way to publicise the Velodrome that they had constructed in their home town. They initially proposed holding the race on Easter Sunday, but relented under pressure from the church, and the first race happened two weeks later. In the modern, globalised world of cycling it has found its place on the second Sunday of every April, the last race in a series of cobbled events in Flanders and the only Monument in France. Many of the top riders of history have tackled and failed to conquer these races. The careers of those that win are defined, reputations and fortunes made.

The race’s history is littered with legend and stories of derring-do, but also of luck and tactical nous. Last year was a victory for tactics: everyone feared Swiss rider Fabian Cancellara following his strong showing in the preceding weeks, so no-one was willing to help him bring back the breakaway. It was left to Johan Vansummeren to ride into the velodrome alone and lift the mounted cobblestone trophy. The year before, in one of those legendary rides, Cancellara had shown his strength, attacking with 40kms left to race. He rode on alone for a victory so remarkable it sparked accusations that he had an engine fitted somewhere on his bike; he would have been one of the favourites for the this year’s race had it not been for a quadruple fracture of his collar bone sustained during last week’s Tour of Flanders, a race won by the man the pundits predicted as his main rival: Belgian Tom Boonen.

Belgians have dominated the race throughout its history, winning 54 editions of Paris-Roubaix, and Boonen started this year’s race hoping to join his compatriot Roger de Vlaeminck as the only men to have won the race four times. De Vlaeminck’s wins came in the 1970s, during a period of 10 successive Belgian wins, including those by the great Eddy Merckx. Despite all that Belgian dominance, only two men have won three consecutive races; Frenchman Octave Lapize in 1909, 10 and 11, and Francesco Moser of Italy from 1978 on.

There's a prickle of anticipation, of another Belgian win. Boonen, seeking to cement his place in cycling legend, is off the front having attacked with 50 kilometres to go and, as he enters the start of the Carréfour, some 2 kms away, he has about 55 seconds of a gap over his pursuers. If he pulls this off it will remarkable.

Nowadays the race winds through the countryside, seeking the stretches of cobbles that give it its character. It wasn’t always like that; initially it was run on main roads, though those of the day were either muddy tracks or cobbled. It was after the First War it assumed one of its alternative names, The Hell of the North. In 1919 a group of race organisers and journalists set off to check what was left of the route. What they found was a scene of such utter destruction and horror, with the legacy of human death and deprivation, the stink of broken drains and rotting animals thickening with every kilometer they travelled north. The epithet l’enfer du Nord was given to what was witnessed that day, but soon became synonymous with the race itself, where the riders finish the day covered in mud and grime, with broken bodies and machinery: perhaps the race is the nearest thing you can get to war in sport.

After World War 2, as France began rebuilding herself, these stretches of cobbles were replaced by asphalt and the race was in danger of losing the very thing which made it special, as the number of kilometers on tarmac increased. At one stage local towns wanted nothing to do with it, thinking that its passing would only highlight their old and rutted streets, so if the race was due to pass through, they would Tarmac over the hallowed cobbles. Now it is the very opposite. Town Mayors regularly contact the race and the keepers of the cobbles, a charity called Les Amis de Paris-Roubaix, telling them of new found cobbled roads. The stretches of pavé are cherished by the race and les amis, who not only find new stretches but maintain the ones the race already uses. Only this year, one of the hardest, roughest pieces of road, where the race can very definitely be lost, if not won, was under threat. It was feared that the Trouée d’Arenberg had become so covered in moss to be unsafe for the riders to pass, especially if wet. Step in Les Amis, who scoured and cleaned the road, ensuring its 2.4 kilometres remained among the 51.5 of cobbles in the 257km race. 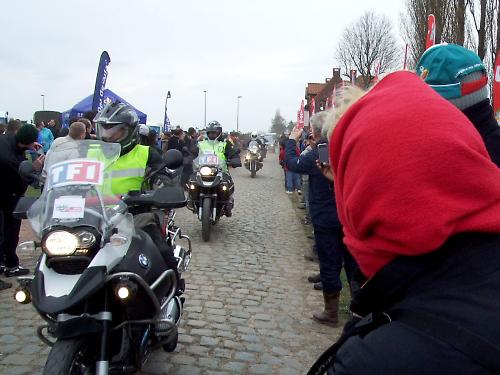 More frequent now the traffic passes, headlights shine brightly through the dusty murk, the odd drop of rain begins to fall; horns blare, a woman puts her hands over her ears. I’ve moved and can no longer see the screen, I don’t need to. Above the cloud of brown dust two helicopters swoop, noisily dipping and diving, their noses point to the ground as they race to find the next vantage point for the viewer sat in his living room, gripped by the drama. The side of the road is crowded now, two or three deep, all of us peering down the road, trying to see through the wall of humanity and between oncoming vehicles, cameras primed.

Then he’s there. His face crusted with dust, his mouth open, gasping, eyes show concentration and fatigue. The crowd lean into his space, shouting their support, he can’t fail to hear, to be spurred on by them. He slows, leans his bike round the corner, then is gone towards his glorious fate.

Other riders approach, the line of spectators at the roadside ripples like a Mexican wave as they lean back, avoiding the riders who pass so close you have to try not to touch them. No other sport allows such proximity to its heroes. This happens over and over, the cheers and support imperceptibly diminishing as the lower order rides by, their commitment no less than Boonen himself, their position not reflecting the work they have put in. Ramon Sinkeldam and Reto Hollenstein ride past us. Dusty and tired, they glance up at the giant screen to see Boonen, hugging his Directeur Sportif, victorious, in the Roubaix velodrome 15 kilometers down the road. They ignore the winner and ride on, like the fans ignoring them, drifting away to their cars. Both finish together, outside the time limit, their day’s ride will count for nothing. No one will remember their efforts. Only 86 riders – less than half – will make it to the velodrome in time to feature on the official result.

Paris-Roubaix is an anachronism, a contradiction; modern bicycles worth thousands ridden by modern athletes, thunder across roads from another age, accompanied by literally hundreds of cars and motorbikes full of people, who broadcast the day’s events across the World as it happens. That this race has remained, survived, through globalisation, modernisation and in spite of sense is glorious. It remains a challenge that thousands come to witness and far fewer battle through, giving their all, like Hollenstein and Sinkeldam, to play an often tiny part in the history of a truly great event. If this race is the Queen of the Classics, long live the Queen.