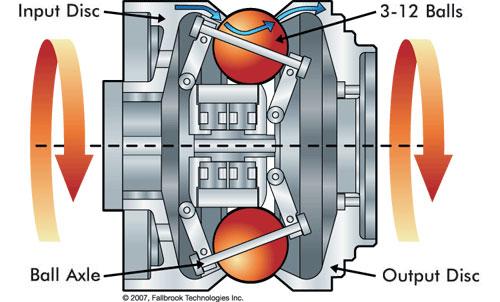 NuVinci: no gears, but all the gears you need?

Hub gears are big in the world of commuter bikes these days with everything from three to 14 speeds available. The benefits to the rider are straightforward: the chainline is simple and fixed, which means longer chain life and the ability to enclose the chain for even lower maintenance; and the gear mechanism itself is protected from the elements too, meaning there's less tinkering to be done there as well.

There are downsides, too, however. The internals of a hub gear are fairly complex, and the more gears you get the more complex they become. Also, hub gears tend to be eight speeds or less (the exception being the pricy Rohloff SpeedHub) which means some fairly big gaps between gears.

Enter the NuVinci hub from Fallbrook Technologies. The NuVinci is a Constantly Variable Planetary gear (CVP) meaning there are no fixed ratios: you control the hub from a twist grip shifter as you normally would, but instead of selecting gears the shifter moves a ring of rotating balls which continuously adjust the relationship between the input and output of the hub. So, within the limits of the NuVinci, you can have any gear ratio you want. You can also change gear whether you're pedalling or not – the same as a standard hub gear – and the internals are much simpler than a gear-based hub. The ratio range of 350% is comparable with an eight speed hub, though well below the 520% or more you can get from a derailleur setup, or a SpeedHub.

There's no actual contact between the balls and the drive plates; the hub is filled with a torque fluid which momentarily solidifies in the small gap between balls and plates to transfer the drive. You need to change the fluid every 35,000km or so but other than that there's no maintenance, and because there are no gears, there's no indexing worries either.

Confused? so were we, a bit. But here's a handy video from Fallbrook which explains the system a lot better than we just have...

Is this all too good to be true? Well, a little bit: you won't be fitting it to your slinky road mount any time soon. The hub itself is a real entity, the first units rolled off the production line in December 2006 and you can have the kit (hub and controller) for a very reasonable $449. Its main application at the moment is defined by its weight: a hub weighs a portly 3.8kg, so the main avenue for bike use is in commuter/cruiser bikes. It's too heavy to be used in a road or mountain bike, but Fallbrook are confident that later versions of the hub will push the weight down to a point where it's competitive with a more standard setup.

There's also the question of efficiency: The bike FAQs for the Nuvinci state that, "As a traction drive transmission, the NuVinci CVP will be less mechanically efficient than direct drive transmissions" but are unclear as to what those efficiency losses might be. In the world of commuting bikes this isn't such a big issue, but it might limit the use of the technology on bikes in the long term. Fallbrook are keen to emphasise, though, that although the technology is well suited to bikes it's not limited to them: they're also marketing the NuVinci as a solution for light electric vehicles, outdoor power equipment, agricultural equipment and wind turbines, among others.

Assuming that the weight and efficiency questions can be answered in a road riding concept, however, the hub throws up some fascinating possibilities. because it's not indexed and the control is simply a rotating axle, it's a prime candidate for electronic control, and you could mate the hub up to a cadence sensor to allow a rider to operate at optimum cadence all the time: no gears to worry about, just small adjustments in the drive ratio. This would be an interesting development in a commuting context too: a bike where you don't have to make gear decisions, you just pedal and it works out the best ratio for you. The end of gears and gear changing altogether?