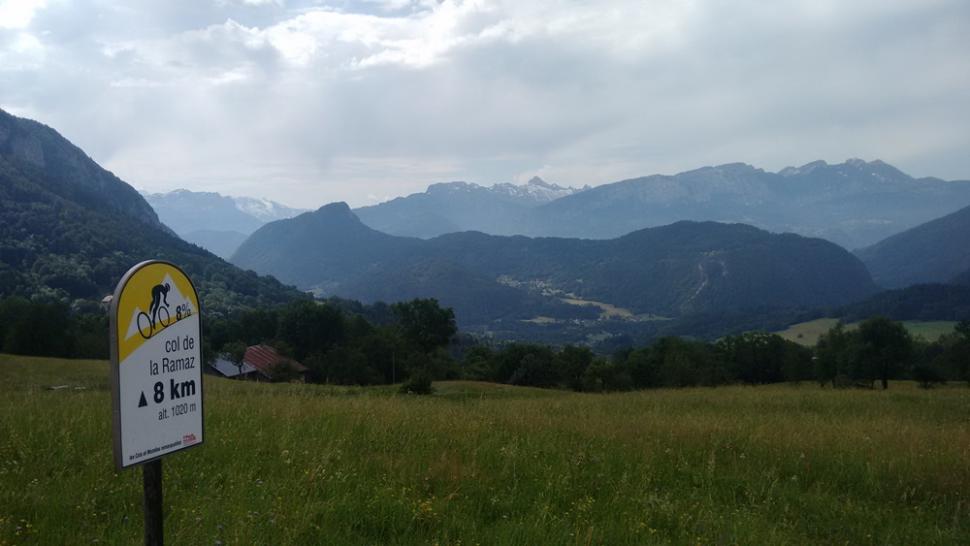 I’d never cycled up an Alpine pass before. Here’s what I learned

Is cycling in the Alps all it's cracked up to be? Alex rides up the Col de Joux Plane (plus a few warm up cols) to find out
by Alex Bowden

I like France. I like the weather, I like the wine, I like the ferocious commitment to serving up ham and cheese in as many different forms as possible. I also like the mountains. However, one thing I had never done before this summer was ride a bike up a proper, full-on, oversized Alpine mountain.

I’ve been to the Alps a number of times before, usually in winter, and I’ve also cycled elsewhere in France a fair bit – mostly when riding from the northern coast down to the southern coast with my dad a few years ago. (He was 70 at the time. Chapeau, Dad.)

It felt like something I wanted to experience with my legs, so I went to Samoens, which is at the exact bottom of the Col de Joux Plane.

Could you cycle up an Alpine pass? 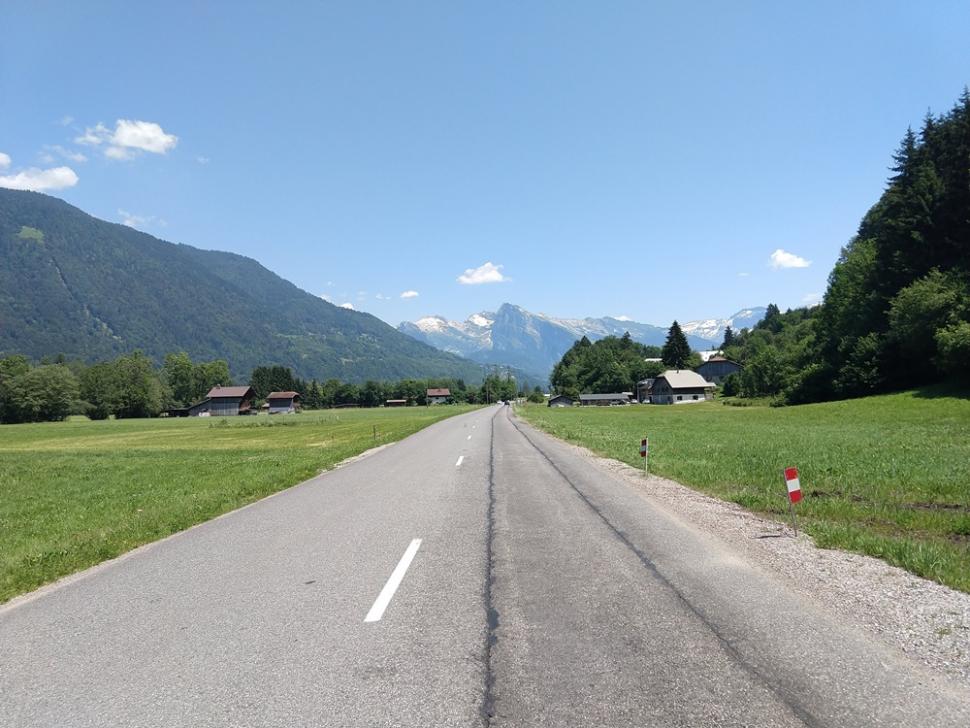 It was easy enough to think through my previous cycling experiences, mash a few of them together in my head and draw the assumption that I could easily ride up an Alpine pass.

At the same time – and given that I had never actually ridden up an Alpine pass, I was almost equally capable of persuading myself that it was some unimaginable feat that was entirely beyond me.

Key to this was a memory of cycling up a not-particularly-steep 10km climb in Provence and really, properly labouring by the end of it. The circumstances were that it was 37 degrees, I’d run out of water about an hour before and I’d just finished cycling the entire length of France. (I don’t know what gearing I was using then either.)

These mitigating factors did somewhere near nothing to mitigate my apprehension. All I could do was compare that fairly innocuous gradient with the ones we’d be tackling this time around.

And this is the first thing I learned about riding up Alpine passes: you form insanely strong opinions about very minor changes in gradient. (More on this later.) 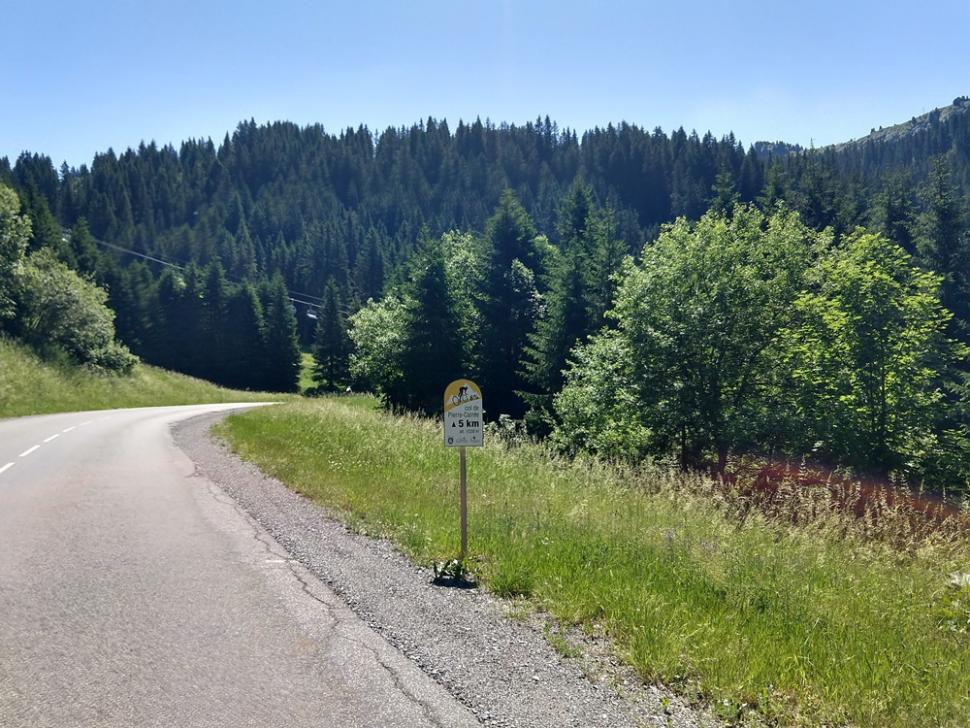 The first climb we attempted was the Col de Pierre Carrée. We chose this for two reasons.

How did it go? Um. It was hot. And we maybe started a little too fast (particularly considering that my other friend, Marcus, hadn’t ridden a road bike since 2017). 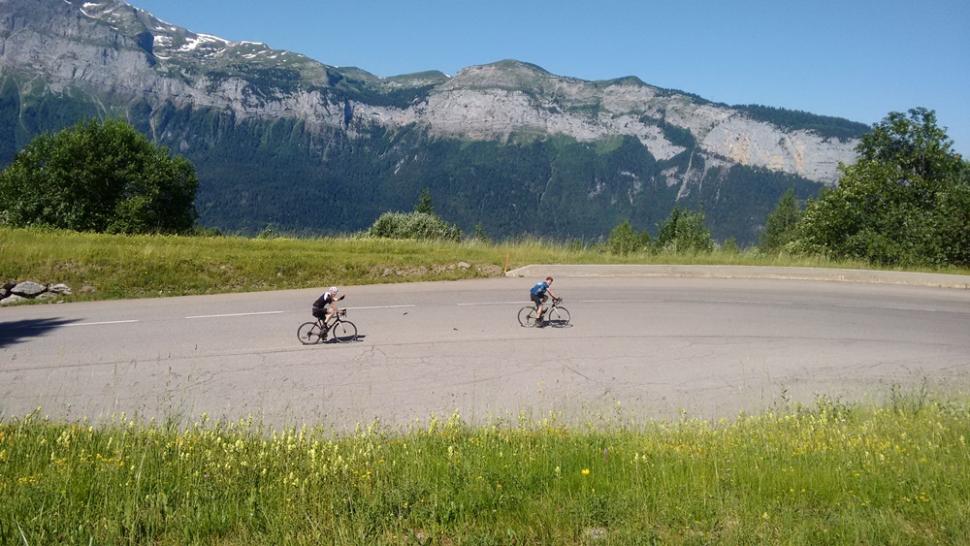 With about 6km to go, Marcus expressed a desire to go and sit in the shade for a moment. Upon hearing this, Pierre – who had been cycling five yards ahead of us, looking for all the world like nothing was remotely troubling him – instantly climbed off his bike and went and sat in a stream.

We completed the climb at a more leisurely pace and it was great and lovely and I immediately felt like we hadn’t really done it properly because we’d stopped.

Afterwards, we sat outside a café until a giant road-digging-up machine went past and dug up the road, showering the whole place in powdered asphalt.

I had a cheese and ham pancake. (Other ways in which I ate cheese and ham this holiday: tartiflette x1, panini x1, “pain au lard” x 1, pizza x3, sandwiches x400.)

Here’s the pain au lard, which I had at the foot of the Pierre Carrée. It was bloody delicious. 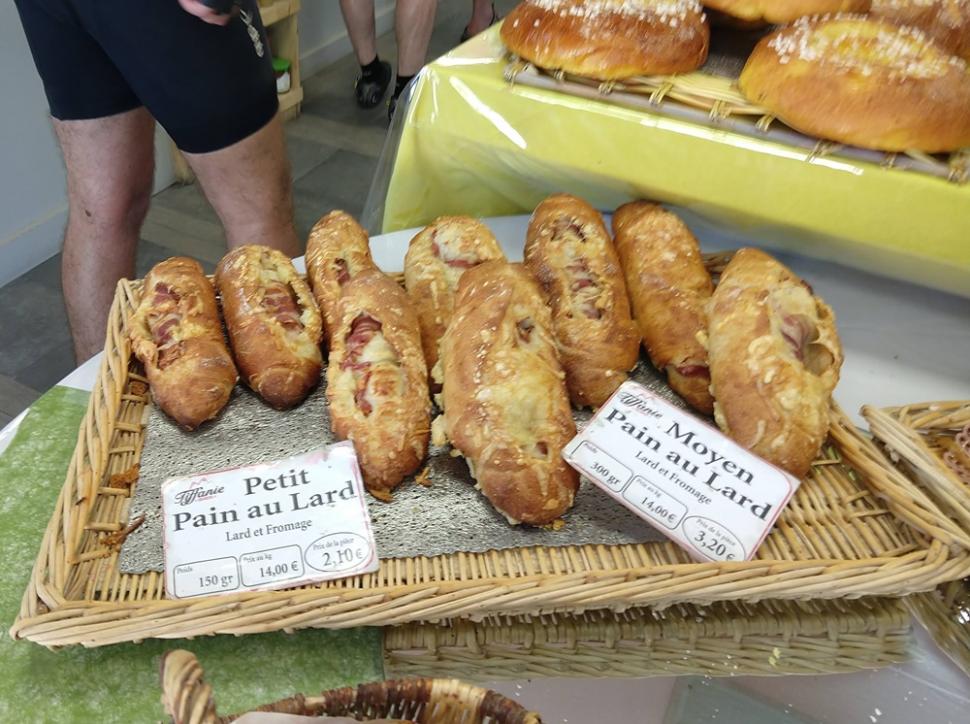 The day after going up the Pierre Carrée, I felt unusually fine. This is the second thing I learned about riding up Alpine passes: you can probably do more of them than you think.

A thousand metres of climbing in the Peak District generally leaves me fully aware that it’s happened the following day. Climbing on the consistent gradients of the Alps, you simply don’t do as much damage to yourself.

You could. You definitely could. But if you know it’s going to take you about an hour to get from bottom to top, you’ll find you naturally measure your effort and that this particular effort isn’t as debilitating as the effort a British road will trick you into.

On a long climb, you settle into a rhythm; a rhythm that is by necessity sustainable. Sustainable efforts are also a lot more repeatable. Throw in a lot less sprinting for the top - because you only very rarely find yourself at a 'top' - and you've got a nice recipe for plenty more riding than you probably envisaged.

I couldn’t go out the next day though because I have a family and am not a complete arsehole.

I went out the day after instead. 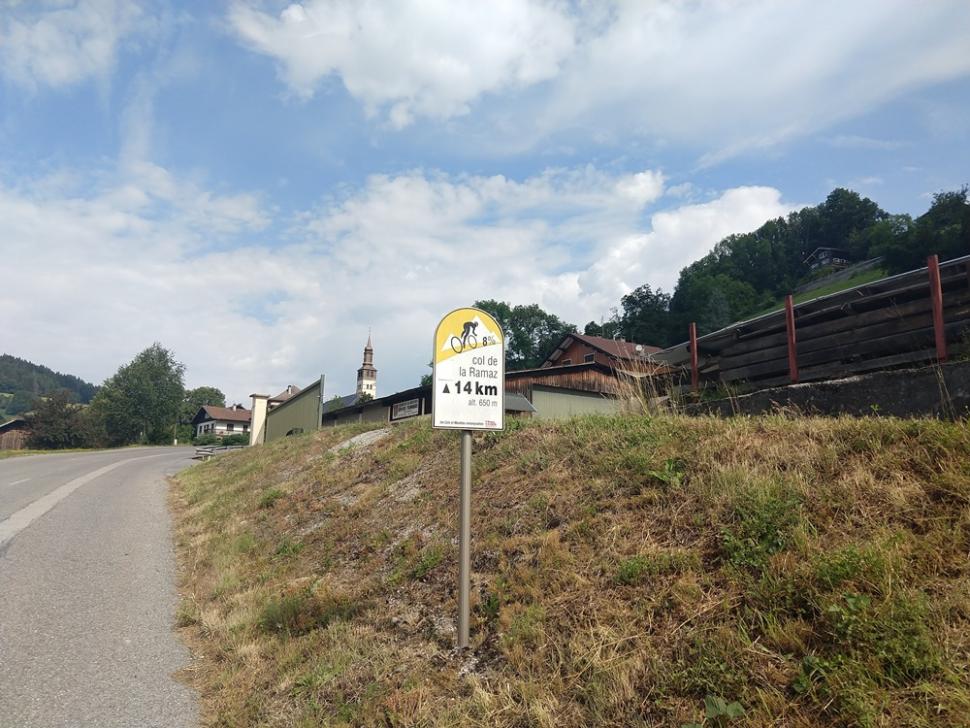 Marcus was off mountain biking and Pierre had tested his legs the day before and not been 100 per cent delighted with them, so we hit on a plan where I’d ride to Morzine over the Col de la Ramaz and he’d come some of the way with me but then take “the low road” to the same destination. (Turned out “the low road” involved 11km at 5%)

The Ramaz was a bit more than that – 14km at 7%. Although he was going a different way, Pierre made a point of climbing it as far as Messy because he entirely understandably wanted to set himself up for some puns later on.

He wisely missed out on the 5km at 9.5% that comes halfway up. Even with compact gearing I did not find this stretch magnificent. (Top tip: always try and own a mediocre bike. That way if you hire one on holiday, it’ll probably be better than yours and it’ll feel like a treat. For much the same reason, never buy too large a television. You’ll quickly become accustomed to it and all that’ll happen is you’ll feel mildly irritated whenever you’re watching something round at a friend’s house.) 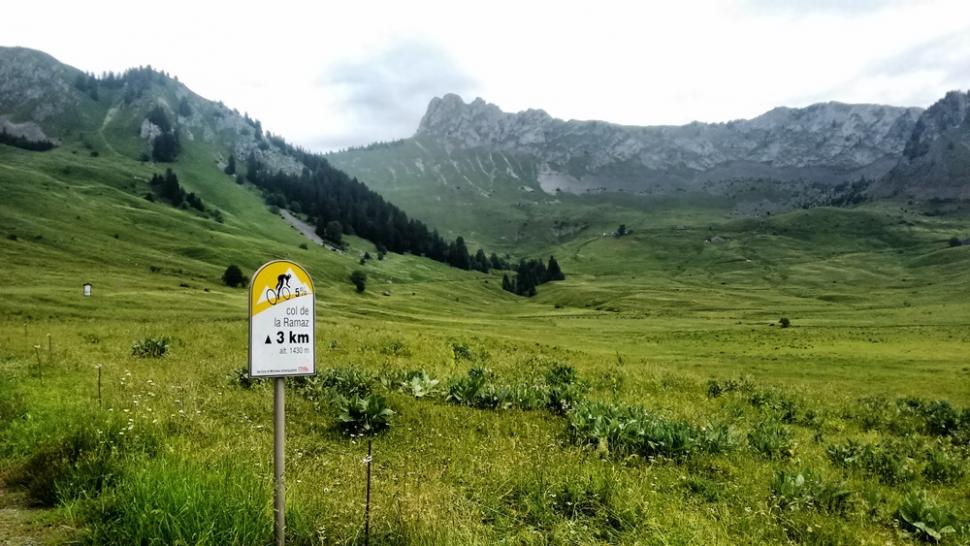 I was happy to get to the top without stopping and exchanged obligatory summit photo-taking duties with a bunch of blokes from either Normandy or Brittany – I’ve forgotten which.

I then settled in for the long descent to Morzine, which turned out not to be a long descent at all, but in fact a second climb to the Col de l’Encrenaz, which I had foolishly assumed was a mere staging post midway up the climb from Morzine to the Ramaz.

The Encrenaz was a lot more irregular and infuriatingly like riding in the Peaks, only hotter. It did however bring the greatest highlight of my entire trip, which was this guy. I spoke to two other cyclists while I was refreshing myself. Both were training for the Tour d’Étape.

It’s nice to stop and chat to people, but towards the end of the conversation I was becoming acutely aware that I was going to be very late meeting Pierre and I also wanted this guy to ride away before I took a photo of the water-spewing unicorn/alpaca thing. A couple of days later, we felt it was time to tick off the Joux Plane, the best-known climb in the area and among the nastiest. (11.5km at 8.5%)

Two men passed us on the lower slopes: a young man – out of the saddle and seemingly intent on maintaining that all the way to the top – and a much older guy.

Both were in their own ways remarkable, but I was far more struck by the latter. Maybe if he were a younger man, he would have looked sickly thin, but his advanced years instead gave the impression that this was a man progressing to becoming a skeleton in instalments.

It was pretty clear he had done this before. Many times. The guy was just skin, bike muscle and bone. This was the third thing I learned about riding up Alpine passes: weight matters.

Okay, I know that we all know that already. I knew that already too. I just maybe didn’t properly appreciate it fully. Climbing in the Alps, you’re not short of time to dwell on it.

Pierre and Marcus are both shorter and thinner than me. The more we progressed, the more I started to feel this. I just couldn’t shake the idea that even if we were moving at the same speed, I was doing more work than them.

How is that fair? That is not fair. (Stupid oversized skeleton, stupid fat arse, stupid love of ham, cheese and beer.)

I also learned that gearing matters, which is another very obvious thing that you and I both already know, but which I again started to appreciate rather more. Pierre and Marcus both had triples and even if my Scott Addict was a little more upmarket, there were definitely quite a few occasions when I thought, ‘I want to be able to pedal that quickly.’

When you're in the UK and only climbing for five or ten minutes at a time, you can deploy a few extra muscle fibres and to hell with the consequences. However, when you find yourself halfway up a mountain pass, riding a kilometre at 10% with another half-hour of climbing ahead of you, this doesn't seem a particularly good way of going about things.

I'd go further than that. It actually starts to feel colossally backwards that you're effectively allowing your bike to inflict a cadence on you. You'll probably go slower overall.

(Flipside: Pierre came home and immediately bought a new, more forgiving cassette for his own bike. He later tetchily concluded that it made “sod all difference” on the irregular ramps around his home. Some terrain is tough no matter what gear you're in.)

For what it’s worth, here are my gradient gradings. These are the thoughts I would have whenever I saw a kilometre marker notifying me of what was ahead.

We bustled to the summit with cod competitiveness and then did the climb from Morzine to Avoriaz for good measure. This was kind of similar but about 1% shallower the whole way and therefore, in relative terms, fairly pleasant. (Although it has to be said that Avoriaz feels a little post-apocalyptic outside ski season.)

We descended the Col de Joux Verte, which was fairly delightful-looking. After that we went home to finish off the last of the week’s cheese and ham.

To put the physical challenge of Alpine cycling in perspective for those who’ve never done it, this last ride was about 95km with 2,500m of climbing. A few weeks later Marcus and I rode 85km round Cheshire with about 500m climbing and he said he was more tired at the end of that than he had been after the Joux Plane and Avoriaz.