We take on the Arenburg cobbles with the new eSAS system being used by Team Sky – it's clever, but is it the future?
by Jon Woodhouse

Suspension and drop bar bikes haven't traditionally gone hand in hand but HiRide aims to change that with a smart 'eSAS' full suspension system specifically for road and gravel use that claims to improve comfort without losing efficiency. We rode it on the brutal cobbles of Paris-Roubaix's Arenberg Trench to test it out. The system might be familiar to those who recall the rear suspension-only Pinarello Dogma K8-S road bike, but HiRide's latest eSAS system incorporates a front suspension unit as well, as seen on the recently revealed Dogma FS.

Find out about the Pinarello Dogma FS 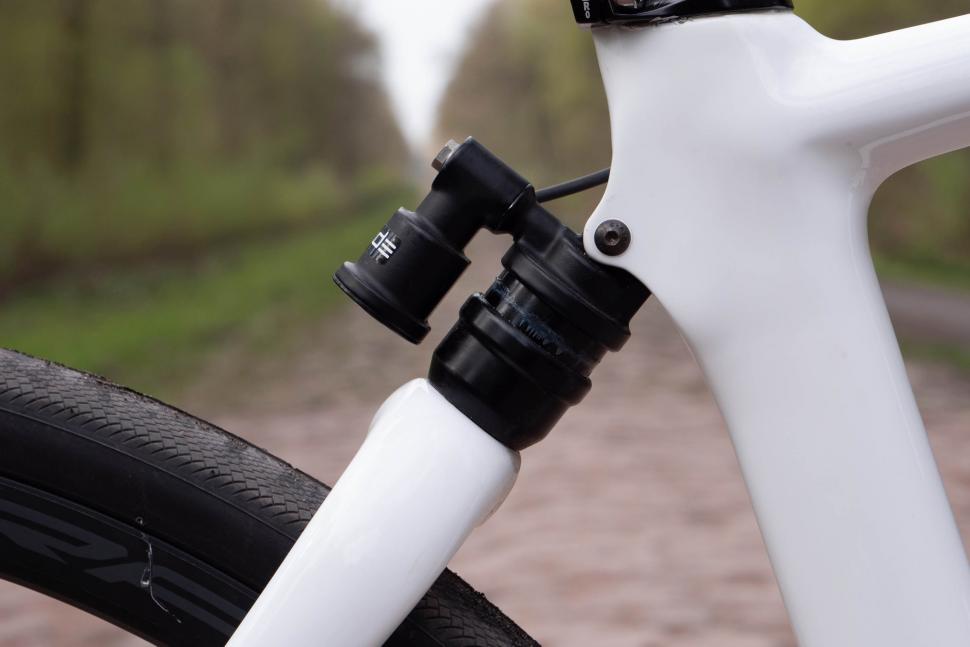 We got to check it out on HiRide's own frame, designed as a full proof of concept of its 'smart' full suspension system that's made specifically for gravel and road bikes, pitched as offering additional comfort and safety without a significant loss of pedalling efficiency.

Milan-based Hi-Ride says, "The eSAS system adapts the suspension automatically and instantaneously to ensure variations in uneven ground are absorbed, guaranteeing a “hard” response on smooth asphalt yet greater stability and a more comfortable ride on rougher surfaces."

Domenico Borgese, Technology Chief at HiRide, said, “After the rear suspension’s debut in 2017, we are extremely satisfied with the eSAS front and rear suspension. Its reliability has been confirmed now that it has been tested in competition by professionals who chose to use it in extreme conditions during Paris-Roubaix. The system improves the bikes’ stability and performance, guaranteeing an optimal level of comfort. This is a solution that will definitely become a must for any amateur cyclists that clock up thousands of kilometres every year.”

That's a big claim; let's have a look at whether it's likely to come true.

The bouncy bits of the suspension HiRide uses aren't particularly groundbreaking. HiRide's party trick is the way the system automatically locks and unlocks the suspension depending on what you're riding over, meaning that you get the comfort of full suspension when you need it and the efficiency of a rigid bike when you don't, all without you having to do anything yourself. 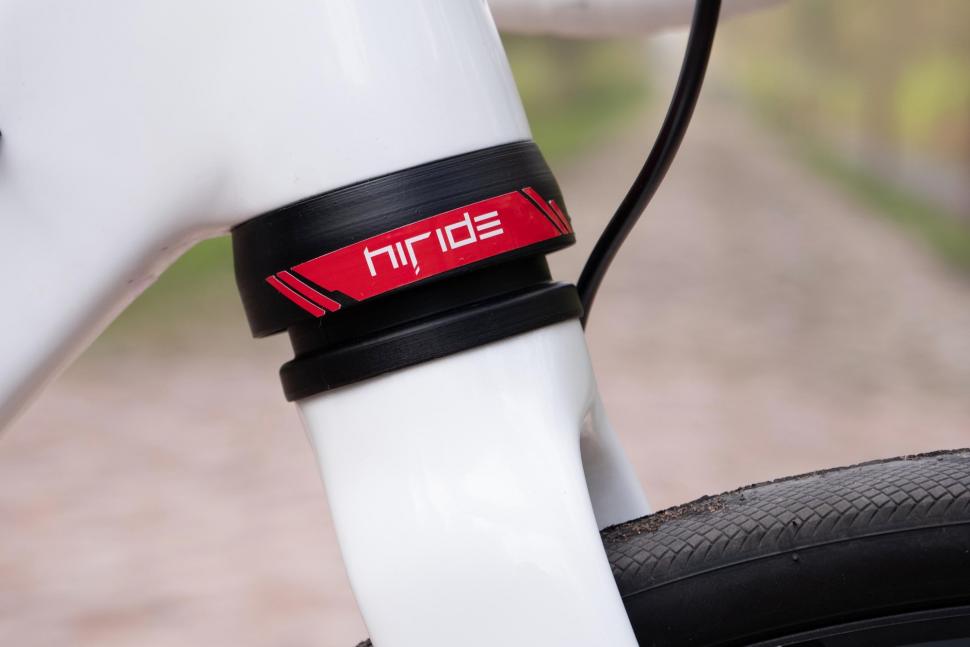 The bike offers 11mm of rear wheel travel from a rubber elastomer spring and 25mm of front wheel travel via a coil spring between the fork crown and the head tube. Both can be adjusted for rider weight by switching out springs, and both have proper hydraulic damping that can be locked out using wired servo actuators that can switch the shocks from open to closed within 0.1s.

Just how and why that's done requires some basic suspension theory to explain and even more interesting trickery to achieve.

How does it know where the bumps are coming from?

Within any suspended vehicle there are two components to the system; the sprung mass and the unsprung mass. The former is what you want to keep as isolated as possible from bumps; in the case of a bicycle, it's the rider and the frame. The unsprung mass is anything that can't be isolated by the suspension, so wheels and tyres plus some parts of the suspension design such as fork legs.

In a normal 'dumb' suspension system, the shocks have no way of differentiating between whether a bump is coming from the sprung side of the system, such as a rider bouncing up and down while pedalling or weight shifting, or from the unsprung side: a bump. The suspension will compress regardless of whether it's a road bump or rider bouncing away on top, meaning a loss of energy and efficiency if the suspension is left open when it doesn't need to be. While there are existing adaptive suspension systems out there – Fox's adaptive Live Valve mountain bike suspension is one such example – they tend to use quite complex and hence very pricey ways to detect whether the suspension input is coming from the ground or the rider.

That usually means having accelerometers mounted to the unsprung bits – fork lower and rear swingarm – as well as the sprung part – the frame – with a brain which then compares the inputs and decides where bumps are coming from. It can then actuate servos to control the damping from locked to open, often fast enough to respond to the bump it's hitting in real time, as is the case for Live Valve, which takes a claimed 3 milliseconds (0.003s) to react and switch the shock to open.

The beauty of HiRide's system is that instead of using multiple sensor units and then figuring out what's going on by comparing inputs, it uses some extremely clever maths to analyse the frequency of all the bumps being input into a single frame mounted sensor. 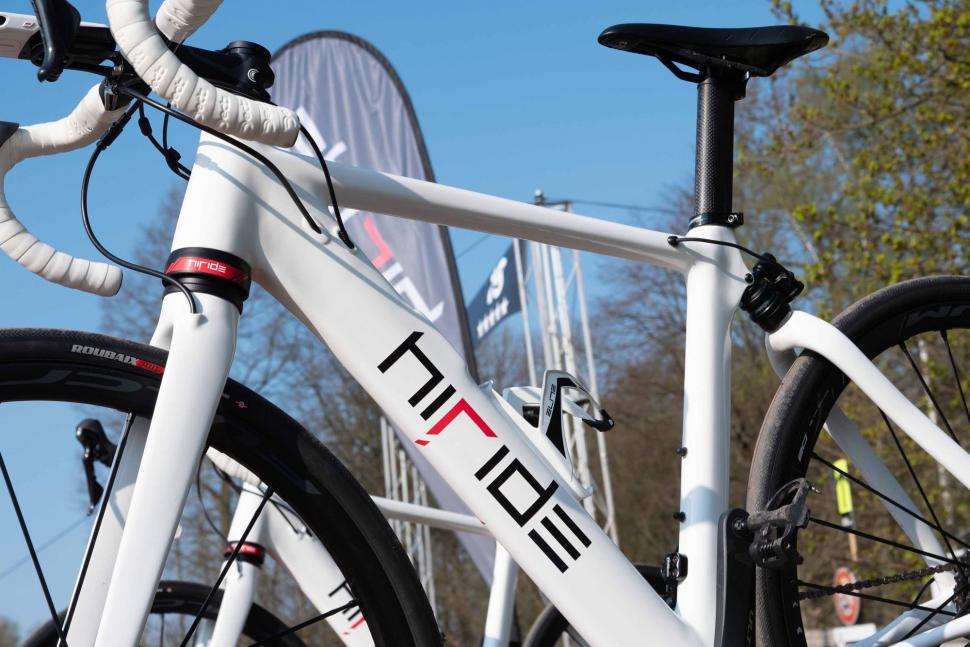 Using clever algorithms, it then decides from these signatures whether it's input from the rider or bumps from the road that are causing them, before adjusting the shocks accordingly. It resamples every millisecond, so if the situation changes, it'll then actuate the shocks again to suit the conditions at that point.

It's a system that's been used by a number of motorbike brands such as Ducati, which is where HiRide's parent company has used it already.

While the two shock units are still physically wired to the control and sensor units, it cuts down on a whole load of extra wiring, complexity and reduces the need for as much frame integrating because the sensor can be placed anywhere inside a frame tube – the seat tube in this case – with the control unit and battery in the down tube.

The downside is that the system can't adapt quite as quickly because the bump vibrations need to hit the frame before it can respond. This would, for example, cause issues if you went from a perfectly smooth surface to a much rougher surface in a very short period of time because the shocks would be locked until after the bike had hit the bump, transmitting a big old shock to the rider – think riding from smooth tarmac into a super rough gravel (or cobbled) section at speed.

To get around this, the shocks use a blow-off valve that will open regardless if there's a big enough impact, giving you a little time until the system can open the shock's valving properly 0.1s later.

With a Garmin GPS computer acting as a display and control unit, it's possible to lock and unlock the suspension manually on the fly using the touchscreen. That's pretty neat, but the automatic mode is where the system comes into its own, as you simply ride and let the system get on with deciding when you need a bouncy bike and when you're best with a rigid one.

In auto, it also has a trio of sub-modes, with a 'sport' mode that will keep the bike locked out unless it gets fairly rough to maintain efficiency, a 'tourism' mode where it's much more eager to open the suspension to keep you comfy, and a 'custom' setting that allows you to put it where you want.

How does it ride?

There are few more testing places for a road bike than the cobbled sectors of Paris-Roubaix – the Arenberg Trench in particular – and that's where HiRide invited us to test the system.

Arenberg's gradient is mostly flat but it's brutally rough and unrelenting. Even by mountain bike standards, it's bloody lumpy and on a fully rigid bike, it's an extremely punishing experience. For comparison, I took along a Lauf True Grit gravel bike – one of our favourite gravel machines – as it has a bump smoothing leaf sprung fork on the front.

Check out our review of the Lauf True Grit Race Edition

There's no doubt that the suspension system makes a huge difference to control on the cobbles, despite the test bike running pretty skinny 32mm tyres. Having both wheels suspended and damped meant the bike was much easier to keep on a line through the cobbles and it also meant much less of a beating through the bottom as well. 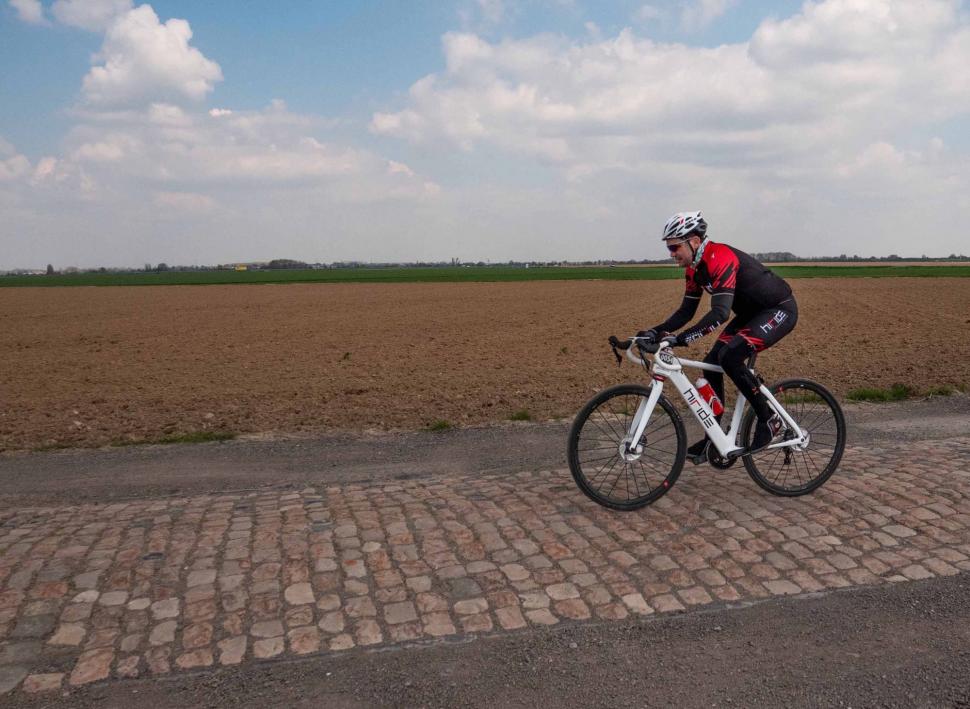 That said, the Lauf was running fatter 40mm tyres and the admittedly undamped 30mm or so of travel also made a big difference to comfort and control, though it definitely took more effort to keep it tracking true and there was much more of a kick at the rear.

It's also noticeable that as the HiRide suspension works to keep the tyre in contact with the ground more of the time, there's much more traction as you're pedalling, with less of the bounce and slip you'd usually expect on rough ground. Of course, Arenberg's cobbles aren't representative of most gravel riding and even less so of road riding. They also didn't do much to highlight the clever bit of the system, namely it being able to switch modes on the fly, though leaving the system in an 'auto' setting and hopping into the cobbles from the smooth side path showed that the blow-off valve works to prevent things getting too harsh before the system can open up.

It was much more interesting to switch the system into an auto setting and ride on the path and observe just how bumpy it needed to be for it to move out of the lockout mode. Sure enough, it worked just as advertised, with the 'sport' setting staying locked out much longer than the more comfort orientated 'tourism' mode. Unless I was looking at the display or listening out for the whirr of the servos kicking in, it was all pretty seamless.

We can't tell you exactly how much the system is going to add to the cost of any particular bike because that'll be the choice of individual brands that spec it. We can tell you, though, that the new Pinarello Dogma FS, complete with the HiRide eSAS system and a Shimano Dura-Ace Di2 groupset, has an RRP of £12,000. We can safely say that it's unlikely to be a budget option at any point.

HiRide's real technology is in the electronic trickery that could be adapted to pretty much any kind of platform. It was telling that we saw plenty of people from a rather large bike brand (go on, guess) sniffing around the HiRide tent as we tested. 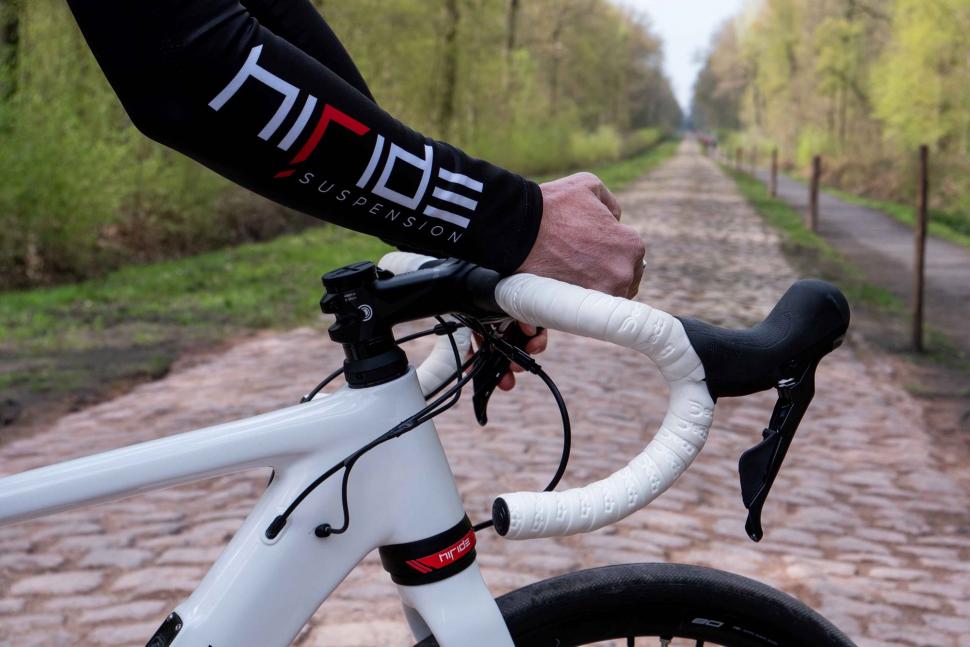 The guts of the system are claimed to add around 600g to a bike, so there's a weight penalty to be paid, as there is with any full suspension system.

It's certainly a very interesting system from a technological standpoint and does seem to work as advertised from my relatively short experience, but whether the benefits it could offer in terms of comfort and efficiency would outweigh the cost and complexity relative to simpler solutions is a much harder question to answer. For many, running a bike with a fatter tyre would probably be a simpler solution, though that might be missing the point of progress somewhat. Is it the future of gravel and road bikes? Well, I'm pretty sure it's got a future, in one form or another.

This article first appeared on off.road.cc.