Riding the Strade Bianche in the rain is like mountain biking. You really have to hold on tight and keep an eye on your line as there are potholes, ruts and gatherings of loose stone everywhere, any slight miscalculation could end up in disaster. We however, and everyone else around us seemed to manage just fine, well, all apart from the bruised palms.

L’Eroica, meaning ‘The Heroic’ is a race held every year in Tuscany, giving up to 3000 like minded, fanatical individuals the chance to ride and race on the ‘Strada Bianche’, the famous white gravel roads of Chianti and to spend two days wallowing in pure cycling nostalgia. In true heroic style only pre-87 bikes are allowed. So there are no auto-indexing gears – this is golden era cycling where shifters are mounted on the down tube, where tubular tyres are also favoured, alongside chrome, cloth bar tape, solid colour paintwork and water bottle holders that attach at the front and where the woolen jersey reigns. Any man interested in the traditions of the Italian cycle race can certainly get his fill here.

The morning of day one of L’Eroica in Italy’s stunning Gaiole in Chianti was the flea market, but it seemed to be more of an expo than anything else. 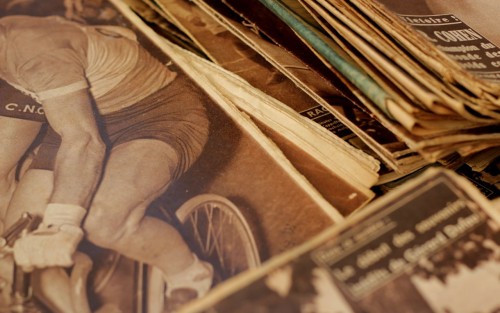 The old man selling his wares on a crudely constructed table, blue cloth and all, after I asked him the price of a particular Cyclisme post-card he proceeded to reel off the names of what seemed like all of his cycling heroes. He spoke loudly and one by one he pointed with his chubby index finger at his heroes on his pink-bordered postcards and with the exception of “Merckx” and “Hinault” all the names he shouted were Italian and two names battled for his prize, “Coppi” and “Bartali”. 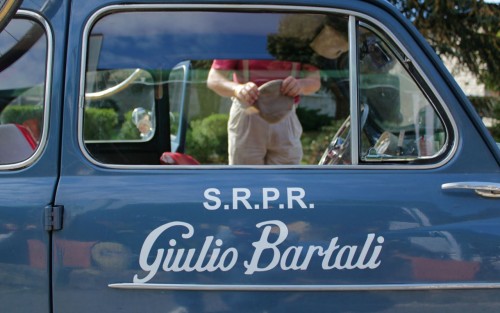 As well as being a place where you could purchase items, the site of the flea market was also for registration and this was a great place to see many of the stunning bikes that would be on the road on Sunday. All, of course pre 1987 as it indicates in the rules and all, of course Italian, of which is not indicated in the rules. I saw lots of beautiful bikes that afternoon but one instantly caught my eye. Francesco Moser’s hour record bike. The actual one. I had seen this bike, an amazing example of technology and engineering a handful of times in photographs and old footage but this, being able to see in the flesh had made my afternoon. Fortunately this one will not be ridden on Sunday

That evening, all of our group from Le Coq Sportif were invited to a social dinner at the school hall. Local food was on offer and of course lashings of local wine. Where we sat, there was a singular man at the end our table peering into his plate. Four or five seats down and with no one in between we asked him if he would like to join us, he said “Si”.

Soft in tone, grey haired with tanned skin stretched across his face and pale blue eyes peering out of his head and speaking no English with us speaking no Italian. We get a pen and start communicating in pictures. He talked (drew) of his preference of northern Italy and the beauty that can be found there by drawing a crude outline of Italy with a line across it and an X underneath. We talk of his favourite Italian marques, Aprillia, Moto guzzi, Ferrari, Maserati which then led him onto likening Ferrari cars to Bianchi bicycles. Legnano to Maserati. I asked him of Pinarello, he does not answer. I make no assumptions on this.. He drew the numbers 3 and 8, the route he’d do tomorrow, it seems he had recently completed 1000km in ten days so his legs were still tired and sore.

The exterior of the building had a party going on at the Le Coq Sportif ‘Caravan du Coq’ a transformed Citroen HY van looking fabulous in French national colours. There was Grappa on offer and music, so we mingled a while and finally, as midnight came close we decided to head home, the next day we were racing. 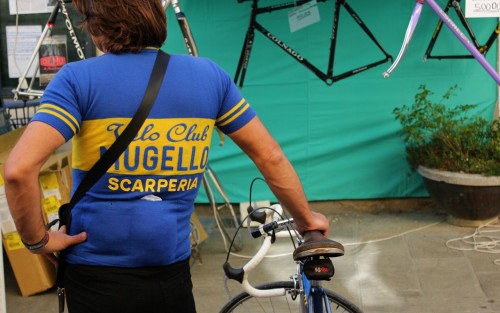 7am. The horn of our pick up van wakes us out of our deep Grappa sleep. I am sure I set my alarm but it seemed the van beat us to it. We got up, packed and ready for day two of L’Eroica. The reason every person has come here, to ride the strade bianche.
Our short, chubby van driver, completely Italian with Black wavy, greasy hair and crooked, coffee stained teeth waited for us outside, ready to take us back to Gaiole. We had to collect our previously chosen bikes from the workshop and get our race numbers attached to our jerseys.

Along the way into Gaiole out of the hills we begin to see many riders already on their journeys and most to complete the 200km route. One gentleman catches my eye, a seasoned rider, slim in build and looking resplendent in full black and white Peugeot kit matching perfectly with his period correct, late 70s pro race bike. He had begun his journey and I wanted to begin mine.

It was Baffi season in Gaiole - the time of year when a man sports a moustache - baffi. In keeping with tradition 90% of the riders have a moustache to complement their woolen jerseys and black woolen shorts with embroidered sponsors names reading horizontally across the legs. It is a sea of headwear too, black Le Coq cycling caps everywhere looking like a cotton made mountain range. 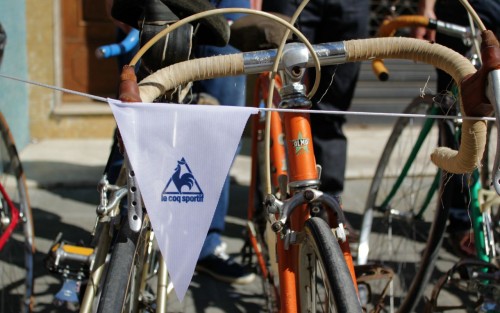 People set off intermittently at 15 minutes and as we waited for Philip Diprose of The Ride Journal to locate his lost yellow bike we all made our final preparations for the day, toilet stop and bidon refill - water out and water in. I thought we should offer to race the French folks in our party but that turned out impossible since they were doing 35km and we were doing the slightly lengthier 75km. On offer was also 110km and 205km for those brave enough.

We set off and headed out of Gaiole into the picture postcard scenery of the Tuscan hills. One minute in and as we began our first accent one of the crackled leather toe straps of my borrowed bike had snapped and it became instantly clear that I was in for a treat.

The first section of Strade Bianche came in the Brolio area, steep and lined with lanterns and casualties of the white gravel. The novices among the massive group of hundreds pushed their bikes up while the more butch muscled their way up through the chaotic crowds, standing on the cranks as they went. Big Italian lungs bellowed out into the forest and “Forza Forza!” echoed around like the voice of a Soprano in an amphitheatre.

At the top of the first gravel climb and into the narrow lanes of the Chianti vineyards we notice a woman straddling her bike with a crowd around her. The sound of lens shutters rattle and we head closer, she has a large owl standing on her handlebars. My friend Matt had asked me earlier if I had seen the woman with the owl and I did not believe him, I should have.

Into the narrow lanes of the Chianti vineyards and I felt moisture on my face and it wasn’t my own. It was raining. You can imagine what happens when you mix water with chalk but we don’t fear, in the spirit of the heroic we continue along the road without even a mention of the wet stuff falling sideways from the sky. But not before we replaced Matt’s punctured tub and a sharp lesson in the dark art of attaching a-tub-to-a-rim-in-the-rain. Luckily a fellow Englishman, Sam, on his once pristine clay splattered Saronni Red Colnago Super kindly offered up some tub tape and a helping hand at seeing us in trouble. Some pressure and a few curses later we were back in play and moving. 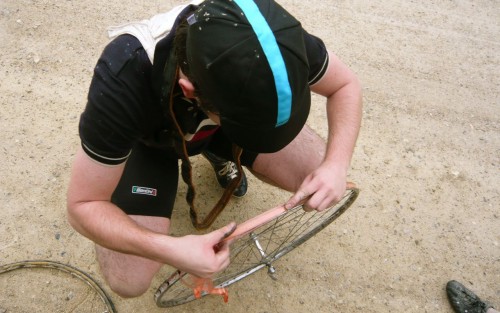 This is the point where some mountain biking skills pay off… as does a well pedded pair of gloves. Making the bikes handle over wet chalk is not easy, especialy on a set of road tyres. It certainly underlines how heroic those old time riders were.

Hungry after eating only a small breakfast and a small piece of Pumpernickel loaf, we followed the perfectly placed permanent road signs into a small historical cobblestoned village where we gained our checkpoint stamps and finally a food stop. Sugary cakes and honeyed bread were on offer plus water and juice for those who wanted it. As well as being the first food stop for us it was also a chance to see how others were getting on, most likely hungry and covered top to toe in chalk. They were, and the bikes. I realized everyone is equal on the strada Bianche.

Three quarters of the way in the sun came out and after a good few quick kilometers of smooth black tarmac the road turned white and pointed upwards and off into the distance, so steep in parts that wheels were spinning in the dust under the pressure of the turning cranks. It is not like climbing on ‘normal’ smooth roads because you are no longer only at the mercy of your heart and legs, you are now at the mercy of the path too.

Now thirsty after lugging me and my heavy 1970s Paletti up and over the hill, like an oasis came food stop number two, more lavish than the last with hot food, Tuscan bean soup and cured meat, olives, thick cooked sausage and this time, unlike the last, there is Wine (I drank water). This place was heaving with people eating, drinking and sharing stories and over to the side there were bikes leant up against each other shoulder to shoulder like pals. Full of adrenaline and eager to finish I ate my food, refilled my bidon and left. I would have loved to have stuck around a while but the lactic acid was building in my legs and the dreaded cramp was in the post. 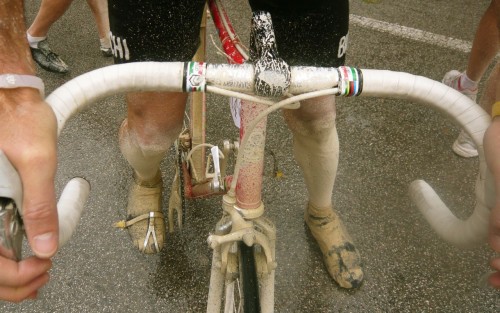 Nearing the finish line and beating the cramp, as a reward for all of our hard work, a right hand turn off the main road into an eternal tooth chattering, rattling, roller coaster descent down into Gaiole for the race for the pink jersey *crowd goes wild*. Everyone in the big ring thrashing their bikes on the outside of the lane, head down, hands gripping the drops of their bars, sprinting. I was and am so glad this race exists. It’s legendary and I now know what all the fuss is about. The moment tickets go on sale next year, I am buying one, or two.