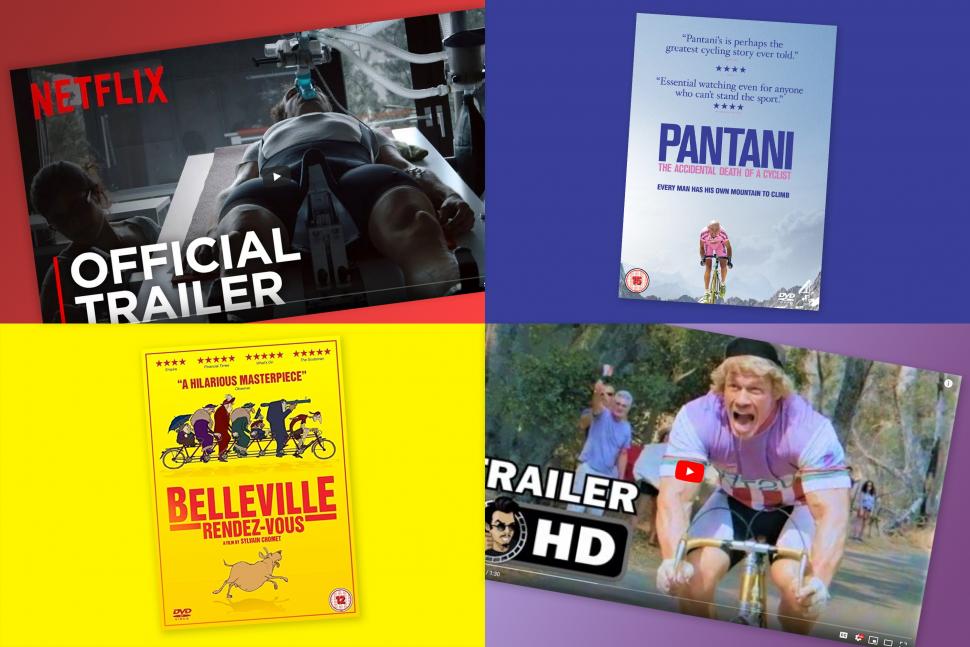 18 of the best cycling films

18 of the best cycling films on Netflix, Amazon Prime Video and DVD

What better way to spend an evening than with some of the best cycling films streaming on Netflix and Amazon Prime or on old-fashioned DVDs?

We've polled the road.cc team and friends of the site and come up with our list of  the best cycling films, from racing mockumentaries, the best fictional accounts of bike racing and documentaries that provide insightful and sometimes alarming glimpses behind the scenes. Enjoy!

18 of the best cycling films ever made

Small-town boy Dave Stoller dreams of being an Italian cycling star in this light, entertaining coming-of-age drama. The cycling action revolves around the Indiana University Little 500, an annual 50-mile relay race held on a cinder track in the university campus, and that grounding in reality helps make this a film that's widely considered the best fictional bike racing movie.

Breaking Away won the Oscar for Best Screenplay and as it explores issues of young romance, father-son relationships, friendship and the tension between affluent university students and the local 'cutters' — named for Bloomington's defunct stone quarry — it's easy to see why. This is a film that says there's more to life than cycling — but cycling is pretty darned important.

When her grandson Champion is kidnapped by the French mafia during the Tour de France, Madame Souza and Champion's elderly and overweight dog Bruno travel to Belleville to try and rescue him.

They lose the trail of Champion and the mafiosi, but encounter 1920s music hall singers the Belleville triplets who help trace Champion to the gambling den where he is being used for stationary bike racing.

This is an utterly charming, slightly surreal, deeply offbeat and thoroughly wonderful movie that'll leave a smile on your face and warm glow inside.

François, played by French comedy legend Jacques Tati in his directorial debut, is the inept but much-loved mailman of a small French village. After seeing a spoof documentary about the efficiency of the US postal system, François resolves to bring American methods to his own rural delivery round. Hilarity, as they say, ensues.

Often feted as the greatest cycling documentary ever made, A Sunday in Hell covers the 1976 Paris-Roubaix from the pre-race preparation of bike fettling, leg-shaving and massages to the final jockeying for position in the Roubaix velodrome and the removal of road grime in Roubaix's famous showers.

A captivating account of the year's hardest day, A Sunday in Hell features stars of the era including race favourite Roger de Vlaeminck and his great rival Eddy Merckx, though neither would take the win in this particular edition of the Hell of the North.

In 1968 Ole Ritter, previously considered a solid but unremarkable Danish professional cyclist, broke the Hour Record in Mexico City, establishing that altitude made a significant difference in cycling record attempts.

The Impossible Hour documents Ritter's 1974 attempt to beat his own record. Spoiler alert: he rode further in 1974 than in 1968, but in the meantime a certain Belgian called Eddy Merckx had also ridden the Mexico City track for an hour and set a mark Ritter couldn't match.

There was a spate of cycling documentaries in the early 2000s as Lance Armstrong's domination of the Tour de France and the race's 100th anniversary caught film-makers' attention. Many of them now seem hopelessly naïve (we're looking at you Overcoming and Chasing Legends) but this German account of the Telekom team at the 2003 Tour de France stands up better than most because it concentrates more on the personalities and camaraderie among a team battling for success despite being deprived of its long-time star Jan Ullrich.

Pantani: The Accidental Death of a Cyclist — DVD/Blu-ray from £3.83

Marco Pantani is one of cycle sport's most tragic figures, collapsing from victories in the Tour de France and Giro d'Italia in 1998 to an ignominious death from cocaine overdose in 2004, paranoid, depressed and alone.

James Erskine's portrait of Pantani examines his life and death as part of a greater whole: the prevalence of doping in cycling, and the victimisation of riders dumb or unlucky enough to be implicated. A tragic figure, Pantani was as much sinned against as sinner.

Read our review of Pantani: The Accidental Death of a Cyclist

Recounting the story behind what many regard as the biggest sporting fraud in history, this documentary explores how Lance Armstrong duped the world and became an icon, only to eventually admit to being part of a doping program in 2013. Director Alex Holmes interviews former friends, colleagues and team members to reveal the full extent of the lies, bullying and cover-ups that went on during Armstrong's ascendancy from cancer survivor to seven-times Tour de France winner before the truth came out.

This 80's classic starring Kevin Costner tells the story of sports physician Marcus (Costner) who persuades his unstable brother David (David Grant) to head out with him to train for a bike race across the Rocky Mountains; but tragically and unbeknown to David, Marcus has a cerebral tumour and has to come to terms with being unable to compete as his brother heads for victory. Powerful stuff and a masterclass in bike race tactics, with some stunning views of the Rockies!

This touching French language film directed by the Belgian brothers Jean-Pierre and Luc Dardenne tells the story of 11-year-old Cyril, who is abandoned by his father and left in care before befriending a local hairdresser. Not strictly about bikes, but the closing scene where Cyril rides away is certainly shocking and memorable.

A film that was originally going to be about director and amateur bike racer Bryan Fogel trying to get better at cycling through taking performance-enhancing drugs, only for him to happen across one of the biggest doping scandals the world has even known. This Oscar winner has to be seen to be believed...

Based on the true story of multiple sclerosis sufferer Ramón Arroyo, who was told he wouldn't be able to walk 100 metres after his diagnosis... to which Arroyo responded by completing an Ironman. Technically about triathlon, but obviously Ramon has to cycle a fair bit throughout the film.

Director and avid cyclist Michael B. Clifford tells the story of cycling in the UK, back where the modern bicycle was invented. It takes a humorous look at the sport of cycling, charting its Victorian origins up to the present day. Features cameos from Sir Dave Brailsford and Chris Boardman amongst other well-known faces.

Pedal the World (2015) — via Netflix subsciption

It's pretty self-explanatory, but this documentary tells the story of Felix Starck's 18,000 kilometre journey through 22 countries as he pedals his way around the globe in 365 days. The whole doc was shot, directed, edited and produced by Felix himself.

Blood Road follows the journey of American ultra-endurance mountain bike athlete Rebecca Rusch and her Vietnamese riding partner Huyen Nguyen, as they pedal 1,200 miles along the infamous Ho Chi Minh Trail through the dense jungles of Vietnam, Laos, and Cambodia. Their goal is to reach the site of where Rebecca's US Air Force pilot father was shot and killed in 1971, making the journey all the more poignant as she discovers how the Vietnam war shaped their lives along the way.

This classic post-war Italian film tells centres on Antonio and his young son Bruno. Antonio is long-term unemployed but is elated when he finally finds work in Rome, only to get his bike stolen on his first day. Antonio and Bruno embark on a frantic search for the bike, that he needs more than anything in order to continue in work.

Bicycle Thieves regularly features in must-see lists, and was even named the greatest film of all time by Sight and Sound magazine in 1953.

An unusual title and unusual subject matter, Murder of Couriers tells the story of a group of cycle couriers over a three year period. Some of the stars of the film tell how they escaped a life of crime and drug abuse by replacing it with the thrill of getting out on their bikes and getting paid for it.