Please sir, can I have some Morevélo?

Hidden right in the middle of Brighton, up a maze of stairs behind an easily ignored door a small yet impeccably-dressed cycle clothing empire is growing. Morvélo is the lovechild of Oli Pepper and Dave Marcar, both graphic designers by trade who a couple of years back were looking for a way to combine their artistic sensibilities with their shared passion for bicycles.

The obvious answer was to make some t-shirts, because the world needs more t-shirts. As both were unimpressed by the standard bike-geek fare that's already out there they decided to produce something instead that to their eyes actually showed some intelligent creativity, and most importantly work as a solid design with the nod towards cycling only coming in second. 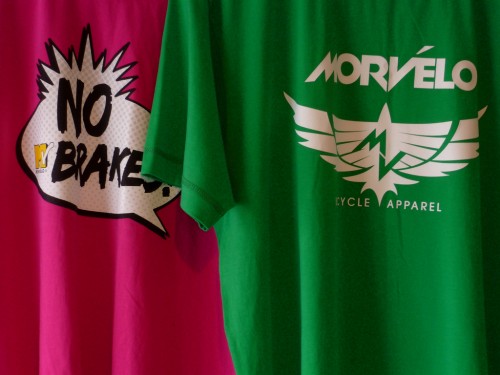 Morvélo harvest their inspiration from a well-stocked and varied larder of bike and popular culture influences, from Woodstock through Picasso to AC/DC, be that a bizarre BMX reference that only riders "of a certain age" will get, or merely something they saw on a poster on the ride into work that day that’s worth using.

Whilst they're at it the pair try to make sure their designs aren’t too 'Cycle Tribe' specific; this could have something to do with a hippywaffly "we all ride bikes, can't we just get along?" philosophy but is most likely to be because Oli and Dave ride BMX, road, cyclo-cross, mountainbike and track and saddle-up to all with equal enthusiasm. It makes sense, with more and more crossover occurring between the different disciplines of the sport and the whole fixie thing introducing a whole new breed of people on bikes who see style as an important factor in their riding. Morvélo see this as a healthy mix that needs both embracing and celebrating, and it's a wealth of potential customers.

Springboarding off the success of the t-shirts a full range of “proper” cycle kit is now available, made by Vitesse in Poland it shows a designer aesthetic and attention to detail that puts most cycle clubs and an awful lot of pro teams (yes, we're looking at you Footon-Servetto) kit to shame. The playing-card suit symbols on the sleeves relating to the chance of bike competition, the "Pure Sweet Hell" tag shamelessly taken from a seminal cyclo-cross video and the knowing wink to the pleasure/pain experience of racing, the icons of racing stripes and checks of a finishing flag, with the stripes on the cap lining up with the stripes on the back of the jacket, which are reflective for safety. They’ve thought about that then. 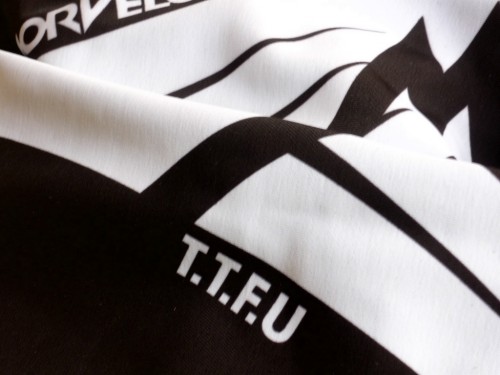 Morvélo like to think that people who wear their kit can feel part of a vast yet friendly world-wide club, without having to sign-up for the traditional tedium of club rules. Although Morvélo do have a race-team, but it's more of a handful of friends put together that can pedal fast (yet to be fair some can pedal pretty damn fast, and far too, there’s some impressive palmares in the list) but more notably also have a good time and be approachable and fun at races and events. The team have just joined forces with Kinesis bikes, based right over the hill from Morvélo to create the KMP, or the Kinesis Morvélo Project, a loose, er, collective with a “Ride, Race, Roam” buzzword philosophy encompassing that whole MTB, Road, Track, Cyclocross, Urban spread thing that you can handily buy a t-shirt about.

Morvélo look to be an steadily successful example of someone who has been unhappy with the cycling product that has been available to them and have set out to do better. By the growing recognition that the Morvélo logo is getting from the street, around the race arena and across the other side of world via a fan in Australia just wanting a pack of badges it seems the Morvélove is spreading.