A day out on the Rhigos+video

What's Verenti's new Carbon lugged bike like? We rode it up the mountain that shares its name...
by dave atkinson

Half way up the Rhigos, on a Rhigos, it was clear that the bike is aptly named. Verenti are a company without a back story, the decades of racing history that many of their competitors can draw on. This bike isn't a Galibier or a Mortirolo, with all the memories that those sinews of tarmac can evoke, but it is a proper bike for the hills nonetheless, and a homegrown one too, designed for these shores. The Rhigos is a proper climb, not the longest or the steepest but a challenge and a rewarding one; you might call it good value and that's certainly what you get with the bike.

Our day on the Dragon ride climbs started on the final descent of the Bwlch climb and my first miles on the Rhigos were a short downhill followed by a bit of high street traffic dodging through the valley towns of Treorchy and Treherbert which wouldn't be all that much fun on any bike. However, the highish position of the Verenti gave a good view of proceedings, and also the clear sense that the flattish miles were delaying the inevitable. It's obvious there's no way out of the valley bar climbing the walls, and the odd glint of a car window in the sun high up to the right only reinforced the fact that the road was bound to go up. 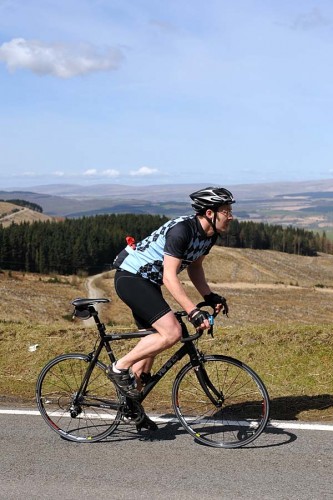 The must cursory of homework on Google maps the night before meant I knew that it did anyway, for four full miles to the pass at 500m. That's a long climb for the UK, and a high one, but at 5% it's not especially steep and mercifully there are no surprises, the gradient is about as constant as they come. On top of that there's some amazing scenery to gaze upon as you winch your way up to the ice cream van: on a glorious spring day there's few things I'd rather be doing than this. On the day of the Dragon you'll be facing this climb after already having hauled yourself over the Bwlch and you'll be glad of a bike that's happy over the long haul and eager up the cols. The Rhigos is just such a bike. Verenti haven't set out to create a thoroughbred race iron here, but a bike that'll happily cover a long sportive at a decent lick without beating you to a pulp. Key to this is the frame: its geometry and ride feel will be at the centre of your ride experience. The Rhigos' lugged Carbon frame has a high front end (a 215mm head tube on the XL I was riding) and a fairly short cockpit; 570mm in this case when I'd normally expect a frame this big to be about 15mm longer. That's mitigated a bit by a long stem so it's really the height that you notice most. The bike sits you up a bit more than a race bike which means that you can enjoy the view, and a few hours in your back will be thanking you too. It's not quite as wind-friendly of course but with 3,500 other wheels to suck that's not going to be a problem, now is it? 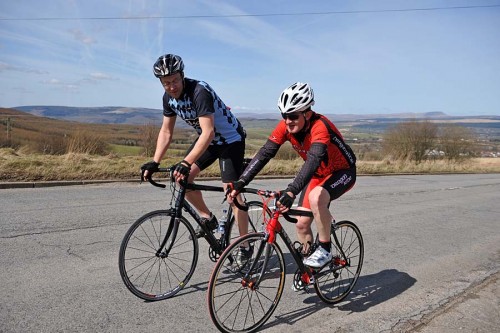 Ride-wise, the climb shows there's lots to like about the Verenti Rhigos. It's a solid, dependable platform and there's enough compliance in the frame and components the soften the blow from the inevitable potholes the winter ice has left for unwary sportivistes. Out of the saddle it's plenty stiff and eager, seated and spinning it feels very stable and efficient. Our £1400 Rhigos 03 scratches under 18lb even in XL guise so it's light enough to feel sprightly, and the Aksium wheelset complements the frame well. Come the top of the climb and the long, fast descent to Hirwaun and you'll be wanting a bike that goes where you point it and isn't nervous at speed, and the Rhigos is that too. The beefy head tube and monocoque fork keep things nicely planted for the blast down to the valley, although the more upright position and shallow drop bars mean you'll struggle to stay with the more hunkered down racers.

An about-face at Penderyn had us facing the Rhigos from the other side after a valley section which the bike handled in an unflustered, unassuming way. On the steeper north face the Verenti was just as happy, on the long descent back to Trehebert and a bacon sandwich stop there were no foibles to report. This is a bike you could happily spend a day on on any sportive, and it'll reward you with a great quality ride.

Is there a down side? There is, but it's more about heart than head. Verenti have set out to produce a capable, good value sportive bike and they've done exactly that: you can spend a lot more than this on a bike that's considerably less fit for purpose. For all that capability the Verenti's not really a bike you fall in love with, in the sense that buying one would be a considered and sensible decision, rather than a more emotional one. I've no problems with folks buying bikes that are perfect for the riding that they do, maybe it just all feels a little calculated. Whatever, buy one of these for sportive use and you'll certainly not be disappointed by the performance, or the value. Perhaps it's a more serious relationship, rather than a fling with something pretty but unsuitable that ends in tears and sore parts. As a £1400 machine, decked out in own-brand kit and SRAM Rival shiftgear, it makes more sense to me than as a top-dollar, Red-equipped machine but either way there's no compaints about what you're getting for your money. 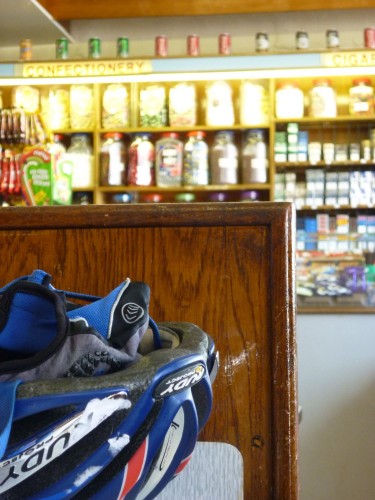 After the cafe stop I was positively eager to tackle the Bwlch and the shorter climb to Llangeinor, such is the appetite of the Verenti for those road miles. There'll be plenty of these bikes carrying heavy-legged roadies over that same final climb on the day of the Dragon, and those riders will have spent wisely.

We will be posting a full review of the Verenti Rhigos 03 soon.