Travelling to the Porsche Driving Experience at Silverstone motor-circuit for a cycle team press launch seems a little odd, but ours not to reason why and all that, this is a team launch and a certain measure of oddness goes with the territory. It’s an early start and a long drive along the M40 to get to the really rather posh Porsche building where a 911 is blatting about on the adjacent circuit, maybe we’ll get to have a play later. That would be fun.

I’m smilingly given my name-badge and invited upstairs for pre-launch coffee and buns. The room is full of cycle industry and media types; The Jeans With Polo-Shirt, the Smart But Casual Suit, The Athletic Shoes With Sport-Wear, The Scruffy Free Clothing, all with a logo splashed somewhere. There is polite chatting until we're directed back downstairs for the official launch of the Endura Racing team.

Looked at from the outside team launches must seem strange, and to be honest they can seem like a weird ritual from the inside too, but they are a necessary part of the cycling year: a full stop after the gossip, rumours and will-they-won't they rider and sponsor musical-chairs of the off-season. There's a need for a definitive view of The Team and that's what the launch gives.

It's a cycling tradition to host the launch somewhere swanky with a posh presentation to impress both invited press and sponsors alike. Sponsors like to see where all their money went, their logo on the chest, or arse, of a lithe and famous young athlete, and to feel part of the team they are bankrolling, the press like the free food and bags of team swag for they are simple beasts. The riders, because pro-cyclists are renowned for their eloquence, have to speak tactfully and string together some words about how happy they are to stay with the team as it's become a family to them, or say how happy they are to be in the new team as it's like a family, copy'n'paste as applicable. And the end-product of all the photographs and all the words and all the hoohah is the public enjoying all their favourite faces in updated team kit, and seeing the expensive shiny new bikes with expensive shiny new bits which might be the same as last years kit, but with newer stickers, but that doesn't matter. It's all about getting over-excited about the new season. 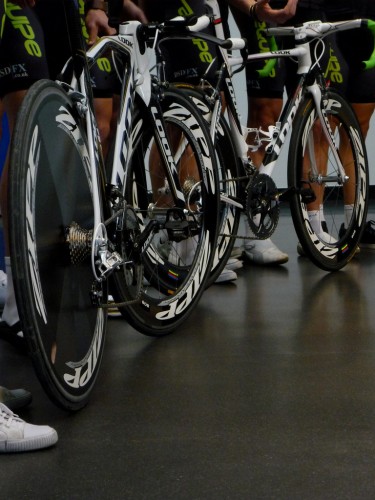 A pair of Look bikes sit being fast underneath a strip of TV screens, and we're given the full spiel, Endura's director Jim McFarlane steps up to say a few more words, hopes and dreams, pride in the team. All that. The list of sponsors is reeled off; Looks sprinkled with SRAM, Continental and Fizik, MET helmets, SIS energy products, Sleep Athlete, and an eclectic mix of other sponsors that conform to the convention that every pro-team jersey should have a logo that prompts the question "what do they do?", and we get some brief words from some of them, hopes and dreams, pride, yes it's a formula but those words have power. A video is shown of the new team picking up their kit, training in the rain and bonding, while upstairs the actual riders wait with a measured mildly bored patience. It's a clear crisp cold blue sky day outside, a good day for a ride.

Eventually the Endura Racing riders parade down in groups of four to be presented to the assembled crowd, there's a bit of talk and they make way for the next group of four, there's a bit of talk… In any other situation a seated audience viewing young men in skin-tight lyrcra could be seen to be a little odd. Crisp £10 notes might even be tucked into bib-shorts. Not here, it's all perfectly normal, and the riders aren't phased, they're just in their work clothes after all. They've obviously been told to wear white training shoes, and all that some can muster are white gym daps which looks a little awkward, this team seriously needs to sort a podium shoe sponsor. Endura's big-hitter on the team is saved 'til last. Rob Hayles has a shopping-list of a palmares and being the oldest rider by quite some way he's promoted as the father-figure to whip his younger team-mates into the riders they could and should be. And the team look like they're going to be taking this season seriously, with a depth of good riders they're punching hard and they're punching solid with a level of sponsorship, equipment and commitment several rungs higher than the usual British team, there's an enthusiastic level of belief here.

Following the speeches and introductions there's the posing for the phalanx of photographs; the team group photo, pictures to be taken with a shifting mix of riders and bikes and cheesy-grinned sponsors and off to the side chats with interested press partaking of free sandwiches and nibbles.

Across the way from the snacks there's a room with some gym-equipment and a sophisticated and expensive exercise-bike in it. It's the home of Porsche Human Performance and the reason for the press-launch being here suddenly makes sense. A centre for fitness assessment and exercise and nutrition planning, mainly directed at the top level of motorsport but also handy for any elite athlete, which can include cyclists.

There's one on the exercise-bike right now and he's rigged up to a HRM that's connected to a computer and his lactate level is being measured every few minutes or so as the resistance on the bike gently ramps up. He's on there for a very very very long time before he even starts to break sweat, and then he keeps going for even longer. A man wearing only bib-shorts and mildly shiny with effort is being watched by a small quiet group and having pictures taken, it in no way seems odd. I have to go find some sandwiches to keep my strength up.

It takes time for the launch to wind down, riders are having more photos taken, this time pretending to snooze on the Sleep Athlete mattress, it's a tough job being a pro cyclist. There's important networking to be done, and I have to pick up my all-important goodie bag. Inside are some brochures and PR blurb, and oooh, a pair of Endura's very fine Marlin sunglasses, and if you’re luckier still (like Tony, our esteemed road.cc leader, who didn't. even. turn. up.) an Endura team jersey with your name custom printed on the back. Nice.

The sunglasses are really  handy for the drive back into the setting sun, thanks Endura. Mission accomplished.