At the end of September Jo Burt and I headed out to Milan to check out Italy's top bike show. In the first installment of our adventures we looked at what the likes of De Rosa Casati and Montante had to offer.  Now it's time for another trawl through the sublime and the ridiculous (which being Italian could easily pass for sublime too) as we look at the bikes being displayed by some less well known brands and from an ultra-bling one and we've included one of our Milan videos too - more of those in our video section. 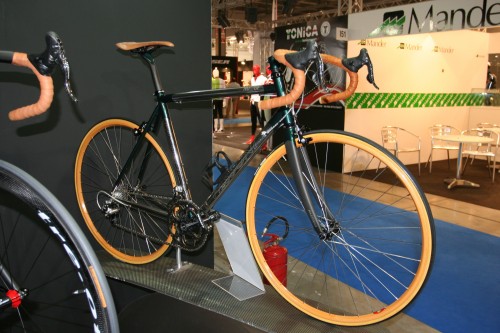 We fleetingly saw the high end Ti and carbon confections from the house of Pat Eurobike, but they were literally carting them off the stand as we gawped so we didn't have time for an up close look. No such problem here. Passoni are known for their high end titanium and titanium/carbon bikes and two bikes of their machines in particular caught our eye in Milan, one of which is neither titanium or carbon fibre.

As you'd expect from a Passoni the finsihing detail is superb, less expected in a bike called the Mirror is a fair bit of it is painted – it's very shiny paint it has to be said – an elegant British Racing Green. The build package on the show bike majorid on classy looking tan leather finishing kit, which for a while drew our eye away from this Mirror's other particular wow factor, its wooden rims.

Aside from the fact that they are truly things of beauty there is not much more we can add to the sum of knowledge on these babies – we're assuming they are build up from composite sections of wood rather than one steam bent bit … although there is always the possibility that they started out as one big section of tree trunk which was turned on a lathe, okay that's probably a pretty small possibility. Wood is a uni-directional material as is the type of carbon that lots of high end wheels are made from so in theory they should be plenty strong enough. There was a fair bit of wooden wheel/stem/bar action going on at the various shows this year although these were certainly the most intriguing. 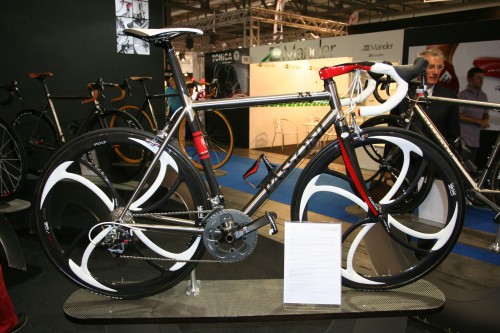 Our other favourite Passoni was the XXTi in all it's full-on titanium glory – well apart from that carbon seat tube passing through a fancy Ti lug arrangement at the junction of the top tube and seat stays. This bike has been in Passoni's range in one form or another for a few years now, but this particular specimen was superb, from the 'look at me!' bloody hard to photograph Passoni OZ499 wheels (they're doing a limited edtion of 10 in white) through the “I live to ride. I ride Passoni” motto on the carbon 'bar and back to the wheels and the very, very pointy qr levers (yes, Merida do pointy qr levers on their TT bike, but not as pointy as this).

Me and the Vecchio loved it, we'd have loved to have been able to afford it even more. As with any other Passoni, if you have to ask the price you can't afford it. If you're feeling really really flush and don't want to be mixing it with the millionaire hoi poloi on there XX Tis check out the even more exclusive Limited Edition XX Ti with Lightweight wheels. Blimey! Right from the sublime to the ridiculous, or should that be the other way around? If the Passoni's took our breath away these bikes went a step further depriving us of much needed oxygen at a cellular level, causing light headedness, giddyness and giggling… quite an addictive experience actually.

So what brought all this on? Mainly the Rossin Marathon, but the Rossin Prestige has something to answer for too. As we say nearly say in the accompanying vid – these are bikes that have pushed the needle so far round the 'Wrong-o-meter' it's ended up back at right.

The Marathon first: a steel cross frame running a fixed drivetrain (with a quick release on the back wheel), they'd be 26in wheels mind, with big old cruiser-style tyres, all done with heavy reference to papa Rossin's parts bin from the 1980s (hey it's an Italian parts bin so check that lovely quill stem), one brake mounted in-board on stoker bars. The Prestige is basically the same riff executed on a skinny tubed track frame with a fork so straight they are the product of a mind that knows only of rake when it comes to clearing leaves.

Rossin is an Italian marque with a proud history, Mario Rossin who founded the company (he sold out in the Eighties) was Colnago's chief framebuilder and struck out on his own in 1974 producing high end racing bikes which were ridden by some of the greats right in to the 90s. Not sure what he would have made of the Marathon and the Prestige… we liked 'em though 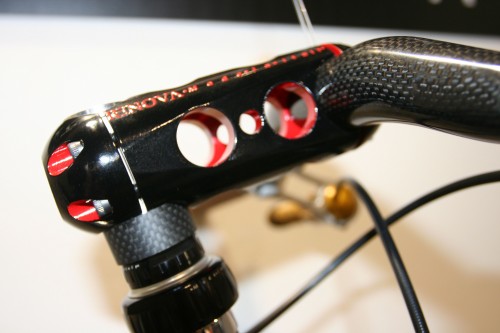 Ernesto Colnago famously drilled holes in some of his top end racing bikes and the guys at Renova have taken that idea and run with it, to be fair what they are actually running with is the idea of making different bikes. So the Renova TT is an audax bike or fast tourer with the addition of lots of holes. A lot of people will naturally be drawn to their very holey stems, but for me the most intriguing items on the TT were the drilled out mudguards – I was hoping that this was to create a pleasant fountain effect as you cycled through heavy rain, but no such luck as Big Dave who knows more about the surface tension of water than I do says it wouldn't go through the holes but would flow down the inside as normal. Shame, but at least you get a lighter mudguard and a conversation piece. The holey Renova TT wasn't the only different machine on the stand we were also taken by the concept bike hanging on the back wall, which featured a belt drive (not a Gates), Renova's own cranks, holey bits (naturally) and some fantastic brake levers that looked like grips. COOL! The thing about Milan is that the weird and wonderful is not confined to stands like Rossin's, Renova's or Passoni's where the weird and wonderful dial has simply been turned up to 11for everything at this show it's everywhere. Take the Wayel shaft drive town bike quietly minding it's own business somewhere in the middle of the hall, yeah it's a shaft drive, well, there's one at every show, but hold on… what's that black box on the back? This is an electric shaft drive machine, you really don't see many of them around. Or tucked the lugged steel fixed tucked away quietly at the back of the Vicini stand sporting ultra-wide riser-style bars flipped forward, no brakes (so bar spinnable) and a suspension seatpost – answers on a postcard please. Less restrained, but still tucked away in a side-booth were some examples of the custom painter's art including Marco Pantani's custom painted bike (above). 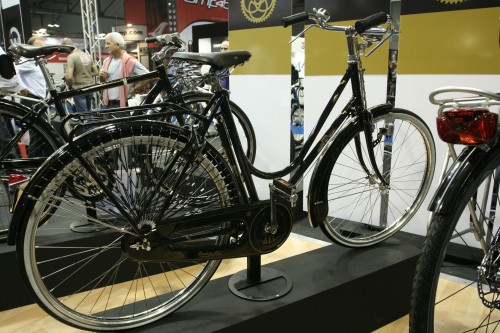 Not weird but certainly wonderful were the range of urban and commuter bikes being shown by Umberto Dei - we saw their bikes at Eurobike too, but they had more of their range on display at their home show.

Milan road bike round up pt 2

In the second part of our canter around the show we saw road machines from the likes of SAB, Whistle, Vektor. Of the three Vektor had the widest range of bikes from full on road machines like the 6.7KG Sintesi, a classic piece of Noughties Italian road bling with the now classic design cues we've come to expect from such machines: a sweepingly curved top tube and an integrated seat post (see also, Carrera, De Rosa, Colnago, Fondriest, etc, etc,) through to some smart looking city bikes. 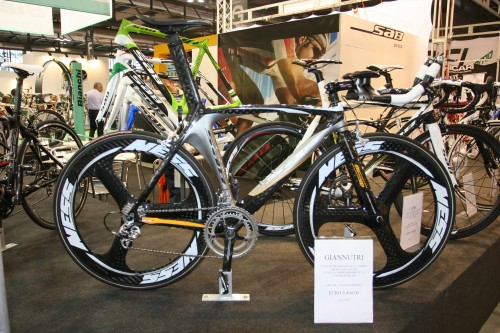 The bike that grabbed our attention on the SAB stand (apart from their kids bike) was the Giannutri a carbon time trial/triathlon bike built up with with Campag Centaur and selling for €5,400, its road-going stablemate the Capri also looked rather tasty – at a tasty price too €5,600. Olmo were there with the line-up they showed at Eurobike including the very tasty Zaffiro. We were also very taken with the bikes on the San Patrignano stand - including a very cool hand built carbon road bike, and their 'bamboo' tandem - actually over-sized aluminium painted to look like bamboo. 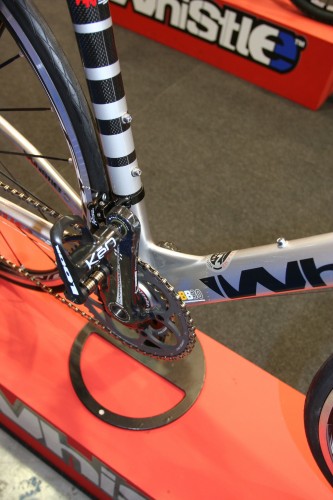 We don't know where Whistle are based but I'd hazard a guess that it's somewhere up near the Swiss border. Maybe it was the paintjobs but some of their machines bore an uncanny resemblance to BMCs it must have been all those chunky squared off tube profiles – they even had a bike called the Team Machine. Check out the picture of the gusset between the down and seat tubes on the Whistle Guyapi – Jo and I both had to concede that we couldn't think of anyone else who done that. Be interested to know what this is supposed to do for the ride – I can see it would reduce fore and aft flex between the two tubes and lateral flex too, but would it do anything to counter the twistingl forces going through the bottom bracket? It certainly builds up that area - literally so it surely adds strength, but that isn't the same as stiffness. 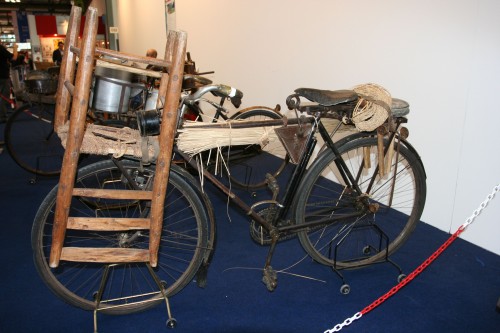 Craziness of a much more practical nature was on show on a fantastically stand devoted to vintage Italian work bikes. And these really were work bikes – there was a carpenter's bike complete with tools, clamps and vices and what looked like a work bench, a coppersmith's machine and a roast chestnut seller's bike both with braziers on the back, an umbrella maker's bike complete with all the tools of his trade – all the bikes were in use during the 1930s and were the tradesman's van of their day, it really is amazing what you can do on a bike.

For more on the Milan Show check out our video channel.