On the boards with Boardman: riding the new TK Pro track bike

Dave heads to Newport to try out the new alloy track machine from Chris Boardman. And get his arse kicked
by dave atkinson

Of all the things I’ve been likened to when riding a bike, a steam train probably isn’t the most flattering. But chugging round the Newport banking, blowing hard and trying to think of the black line as a rail, it’s certainly accurate. 500m doesn’t sound like far. But there’s a reason Cav starts his sprints at less than half that.

We’re at the Wales National Velodrome to have a go on the new Boardman TK Pro track bike. At £799 for a triple butted alloy frame with a Truvativ Omnium crankset, track wheels and alloy finishing kit it’s designed to suit both the trackie racing on a budget and anyone wanting a light (7.56kg claimed weight as specced) and fast fixed bike for the road.  Drilled for brakes front and rear, with internal routing for the rear calliper, it’d certainly look smart around town. Like the new Hoy Fiorenzuola you get the feeling that really it’s specced for the boards, but the majority will probably find themselves mixing it with the traffic. 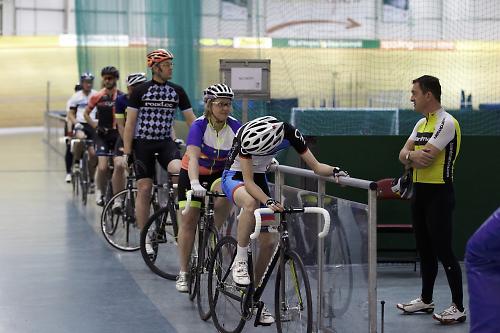 It’s all about the track today though, and with it being a press gig there’s the usual full gamut of outfits, from peaks and baggies to skinsuits and aero lids. And with a high percentage of track first timers Gary the coach takes us all through the yes-it’s-steep-no-you-won’t-fall-off introduction that gets pretty much everyone rolling round on the black line before too long. It’s only the second time I’ve been on the track on anything other than a workaday hire bike – the first was on the Hoy – and it’s immediately noticeable that the TK Pro is a lot more eager than the fleet bikes. I’m on a large Boardman, when if I was choosing I’d probably go for the XL; that probably makes the bike feel a bit faster in the turn, but it’s well behaved and everything feels just right. Even the road tyres are fine. The TK Pro responds really well to a jump on the pedals. After a year that started with two weeks in bed with a prolapsed disc, it feels fantastic to be able to put some power down on the boards.

It’s not all friendly trundling round on the blue line though; Chris has us down to compete. A flying 500m for qualification and then 500m pursuit, from a standing start, to sort out the final order. I ask him if he’s going to set a reference time. His response: “pick any two laps from 1992”. I’ve done a flying 500 a few times now, so I know the drill a bit. Roll out and pick up a bit of speed on turns one and two. Open it up a bit, get yourself high on the boards for turns three and four. Get on the gas, downhill to the middle to hit the black line before the end of the straight. Then it’s just a case of ranting round for two laps, as low and as fast as you can.

Except it’s not. Two laps is a long way. By the time I’m back at the start line for the bell, 250m in, I’m starting to really suffer. Although I’m trying to keep to the black I’m not good enough at speed on the bends to keep that low, so I drift up to the red, losing time. Lung-wise I’m drifting into the red, too. By the time I’m heading for the last two turns I’m really suffering, the legs are burning. Nothing left. I can feel my cadence dropping. One final push and the line’s in sight. All that’s left is to dive for the line. And remember that the pedals won’t stop going round. And relax. And not relax so much that you drift down and take out the event photographer who’s down on the warm-up bit. And feel a little bit sick for half an hour or so. After all that I’ve managed to record a time of 35.44 seconds. To put that into context, Sir Chris Hoy currently holds the record for the flying 500: 24.758 seconds. I’m a bit off the pace. To put it into context for the day, it’s a bit of a brighter outlook. I’m second, behind Janet (above), who’s posted a 34.7something. Janet’s not on a Boardman, or a hire bike: she’s got an Avanti track bike with a disc wheel and a five spoke up front. She looks like she might have done this before. I noted earlier that they didn’t make her do the introductory stuff.

That gives me a shot at the Gold medal then, which would be something to add to my Palmarés that currently majors on my three Mountain Bike Bog Snorkelling titles back at the turn of the century. Janet’s friendly and chatty ahead of our face-off, it turns out she took up cycling in her 30s and now, in her mid-40s, she’s racing Masters. That’d explain why she’s well kitted out. And probably about to kick my arse. Anyway, time for the final. We line up. We’re held up by the coaches. Five. Four. Three. Two. One. 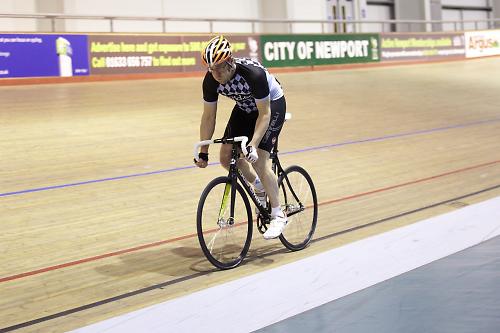 Go. Everything I’ve got goes into those first few pedal strokes as the bike works itself up to speed. The TK Pro is an admirably stiff platform; I’m not sure how that’d translate to the rough tarmac of a UK city centre but on the track it’s perfect, with every ounce of your effort feeling like it’s translated directly into forward motion. Sprint into the first bank. Sink into the saddle on the exit. Keep accelerating. Another bank. Don’t look at the opponent, focus on the black line. Focus. Another bank, one to go after this. My legs are starting to go, I can’t keep on top of the gear. Last two turns, onto the last straight and full gas to the…

The whistle pulls me up sharp. It’s over. I’ve got at least twenty metres left to ride, but Janet’s all done. I was never in it, really, it turns out. I’m pretty happy with second on the day, especially since it’s only two months since I couldn’t even walk. Janet gets another gold to add to her palmarés. But I’ve checked her palmarés and she hasn’t added it on. Or maybe I just can’t see it in between all those UCI world titles. I’m not sure.

Thanks to Halfords and Boardman for looking after us at Newport. All pics © Steve Behr / Stockfile