USE Visit and New Product

A quick look-see at USE

Squash round the tight awkward one-way system of the sleepy antique-shop cloyed mid-Sussex town, scrape down the long wall of the 17th-century country house with a 700 acre deer park designed by Capability Brown and immortalised by J.M.W.Turner in oils, turn right and right again into a small industrial estate and squeezed between the tyre-and-exhaust company and the graphic printers you’ll find USE. A little cave of technology and invention seemingly at odds to its bucolic surroundings. USE, or Ultimate Sports Engineering to give them their proper long winded name, have been making bike parts on the edge of Petworth for nearly 25 years, initially in just the one industrial unit they’ve now spread out to four – two on each side of the road - as the company has grown. There’s a lot of walking between them through the maze of higgledy parked cars on a day-to-day basis, but that’s due to end soon as they’re moving to new premises just over the hill where everything will be under one large roof. It’ll be situated right in the shadow of the South Downs where a lot of their product testing gets done so perfect for the lunchtime ride and prototype shake-downs. 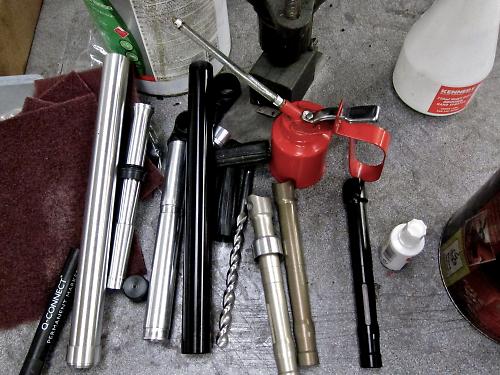 On the one side of the Ind. Est. there are the offices and the machine shop and on the other are the storage and lights, which accurately describes USE’s split personality. USE is the part of the company that does all the bike components, the seatposts, the stems, the road and mountainbike handlebars, the wheels, quick releases, bottle cages and chain-rings. Across the way is the lighting division of USE, otherwise known as Exposure Lights. Originally making lights for just the bicycle market Exposure have now branched out to Exposure Marine which adapts those lights to work in a sailing and diving environment and there’s a smaller sub-section making Adventure lights for running and other outdoor activities. Exposure could pretty much survive as a stand alone company as they shift between 30,000 to 40,000 lights a year and show no signs of dimming. 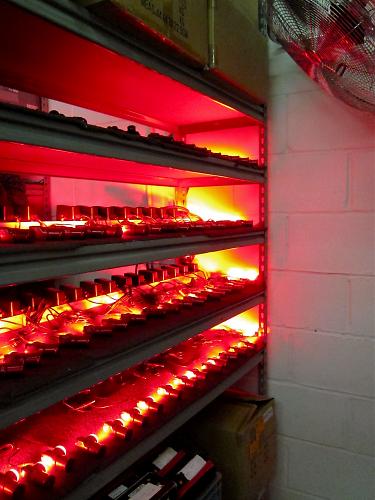 Walk inside and you’re greeted by a lot of wires and a lot of light. On racks of shelves at the back are lines and lines of Exposure lights, each one going through a full charge and discharge to check they work okay before they’re shipped out to customers. Every other workspace is covered with bits of metal, tiny computer boards, LEDs and wires, it’s both high-tech and cottage industry. Any problems with your Exposure light, no matter how old it is then you’ll speak to Ron, the stalwart of the Exposure Service dept, he’s been there since day one and knows everything there is to know. He lives just round the corner. If your light is ailing Exposure will do everything they can to fix it, whether that’s sending you a new one or upgrading the insides of your old worn out unit to make it shine. 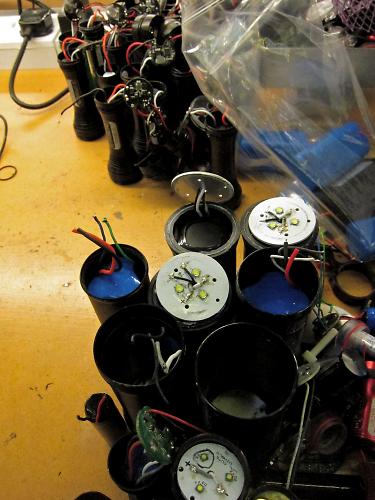 Not content with near on a score of Exposure bicycle lights to deal with the Marine department has it’s own separate range with it’s own very specific requirements. They take all the Exposure knowledge gained from years of making lights and add new technology to make something suitable for an even more waterlogged environment than cycling, if you can imagine that. Complete waterproofing, buoyancy and endurance all combine to make lights with features you wouldn’t have thought of as possible. They show me a light that because it has to be totally waterproof doesn’t come with a mechanical on/off switch but instead you turn it on by tapping it twice and then you turn it off by rotating it anti-clockwise. This blows my mind a little bit on a Monday morning. Obviously there’s enormous cross-over potential between the Marine and Bicycle lights departments as each pushes their respective envelopes, and an example of what the future may hold comes in the form of the Equinox helmet light. Small yet powerful it pumps out an eye-watering 2000 lumens of light, but impressive as that is it’s not the exciting bit, the wireless remote switch on your handle bars is. There’s no need to fumble up to the light switch to change light settings, simply push the button on your handlebars and let the Wireless Remote Switching toggle through the modes on the light on your head for you. As a frequent night rider for the last 25 years or so this is something I’ve been dreaming of for years, we are living in the future. 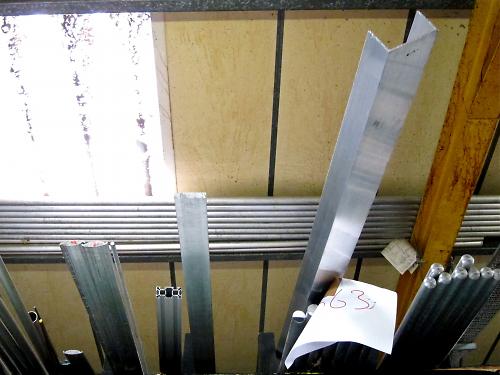 Sufficiently blinded by science it’s over to the machine shop where USE make as much of their product as they can in house. They’re proud of that, they’re proud of being in Sussex, they’re proud of employing people from this small town. The machines run from 7am to 2am whittling away at blocks of aluminium to turn them into light housings, seatpost parts, stems and chainrings. There are long strips of aluminium in the recognizable shape of Alien seatpost clamps waiting to be chopped and finished, trays of hollow tubes are patient for light electronics, there is the mix of grubby and pristine that you only get in such workshops. Ten pence tour done it’s time to look at the new and shiny things USE have to offer. First up is the new EVO 91 seatpost, which road.cc saw briefly at the London Bike Show recently. The 91 in the name is a nod to the year USE made their first rigid seatpost, a year after their first product which was the SX suspension post, a product that is still going strong. It uses the same saddle clamping system as that original seatpost, USE went all around the houses to try and find a better and lighter system and ended up back where they began. It’s a refined and lightened version of that original and familiar clamping mechanism, there’s the rod that goes through the post, two saddle rail top-clamps, a C-shaped cradle and a pair of bolts. It’s light, it’s simple, it’s easy to adjust. They tried a carbon C cradle, because, you know, everything has to be carbon, but to make it strong enough it turned out heavier than an alloy one. Little tweaks have been made to lighten things as much as possible, the through rod is machined out, the rail clamps drop down to meet the bolts as that’s lighter than a longer bolt, and those bolt heads are rounded to both remove the need for washers and ensure an even pressure on the clamp. The alloy head is bonded to a carbon seatpost shaft, making the weight for a 31.6 x 400mm post 190g, that’ll the heaviest option, and handily for a seatpost that’s been shaved for lightness it doesn’t have a rider weight limit. This one here is a mostly finished pre-production sample, the graphics are still being worked out and the end will be tapered to chop even more weight off, the EVO 91 will cost about £100. Next up on the New Things list is the 2.4 carbon clincher wheelset. An addition to their range of road, ‘cross and mountain bike wheels this builds on what they’ve learnt from those being ridden and raced. They use the same hubs as the previous wheels, boasting fully sealed Japanese cartridge bearings and a 6 pawl, 30-point engagement fast pick-up alloy freehub that’s 9/10/11spd compatible and available in a Shimano or Campag fit. Sapim CX Ray spokes are used in a 20/24 spoke count, laced radially on the front and 2 cross driveside, radial non-driveside in the rear. 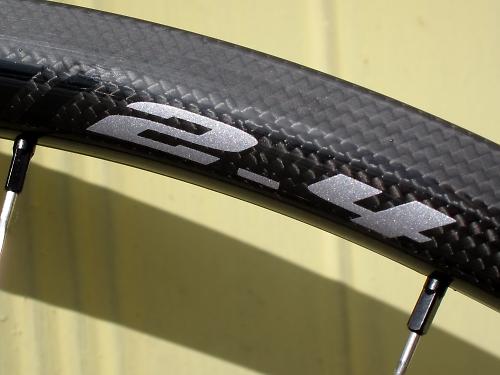 The 24mm rims are full 3K weave carbon and come with USE’s Nano Surface Finish, a coating that reduces drag and allegedly reduces the ability of dirt and mud to stick. They have been designed with on-trend wider 25mm tyres in mind and bother the scales at 1400g a set. The wheels will part you with £1,199.99 and come complete with USE SpinStix skewers and carbon brake blocks in the box. While we were chatting there was a prototype stem on the desk waiting to be picked up and fondled inquisitively. Designed to fit their R1 aero handlebar the stem has holes for internal cable routing to keep things slippery and as it splits in two can come with a selection of top halves; plain, with a Garmin mount or one with a Di2 window. The clamp is machined to fit around the oval centre section of the aero USE bar but there’s nothing to stop them adapting such a system to fit a standard stem diameter, the machine shop is just next door after all, and soon to be in the same building. 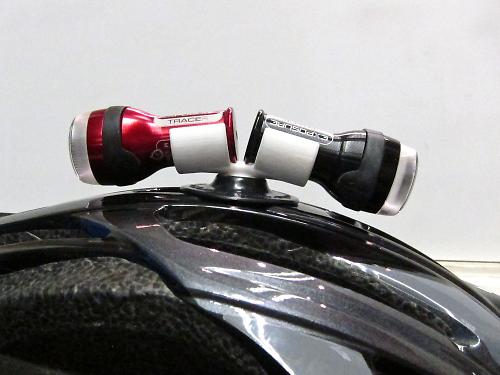 And finally something a little less bling but really quite useful is this new Exposure helmet mount for the Trace and TraceR lights pairing. The Trace and TraceR are super compact front and rear lights that are chargeable via a USB port, both have three brightness modes and the choice of solid or pulsing beams. With a light output of up to 110 lumens and run time somewhere between 3hrs on the brightest setting to 24hrs on pulsing the lights usually come with handlebar or seatpost mounting brackets. USE have just designed a new helmet bracket that allows you to fit both lights on your noggin for visibility, safety and convenience. Ideal for the commuter the mount will cost about £20. That’s about it for that little thing really. Cute though. 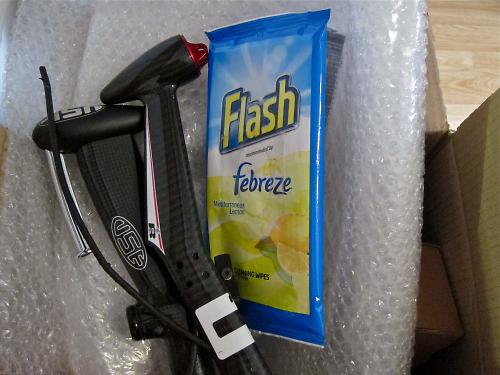 And we’re done, there’s nothing left to fondle and it’s time for the lunchtime ride to slip unnoticed past the twee tea-rooms, beige and chintz on it’s way to the rolling Sussex countryside.