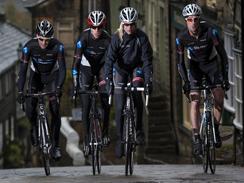 The Bronte Sportive is a challenging cycling event in the heart of Pennine West Yorkshire. Our 7th event will take place on Sunday 17 July 2016 and as in previous years there will be four routes to suit all abilities.

However the big one, the Bronte Monster is 88 miles and though it's by no means one of the longest sportives it is recognised as being mile for mile one of the toughest sportives in the UK.

Sponsorship
Because of generous sponsorship from our sponsor All Terrain Cycles all entry fees and any sponsorship raised goes straight to funding Sue Ryder's care for people living with incurable illness within West Yorkshire. There is no obligation for participants to fundraise but obviously we are grateful to those who do, and those who raise £50 sponsorship or more get entered into a prize draw to win cycling related prize from All Terrain Cycles.

The event starts and finishes at the Keighley Campus of Leeds City College and riders can set off between 7:30am and 9:30am. Those doing the 25 mile route can set off until 10am.

Thr routes
The routes are the same as the past two years and take in over 30 miles of the 2014 Grand Depart Yorkshire route.

Sue Ryder Manorlands Hospice also organises the Bronte Mountain Bike Challenge. If you would also like to participate in our other events pleace contact us on 01535 640430.