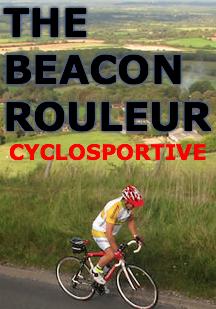 A Rouleur in cycling terms is a rider that is a consistent all rounder, who can ride well over most terrians. The Beacon Rouleur is a cyclosportive route that suits such a rider.

Tough large climbs in the beginning like Ditchling Beacon and the Bear Road in Brighton and faster flat section later on make up the Beacon Rouleur cyclosportive route.

A famous climb in the area Ditchling Beacon arrives early on all three of the routes of the Beacon Rouleur.

Just 5 miles from the start riders find themselves climbing the famous Ditchling Beacon. With fresh legs this is achieveable for most, albeit at various speeds.

There are three great routes of various distances to try on this cyclosportive.

All routes have Ditchling Beacon to climb in the first 5 miles.

This event is part of the SRS EVENTS Cyclosportive Series http://www.srs-events.cc

Plus many more events including trips abroad for cyclists.