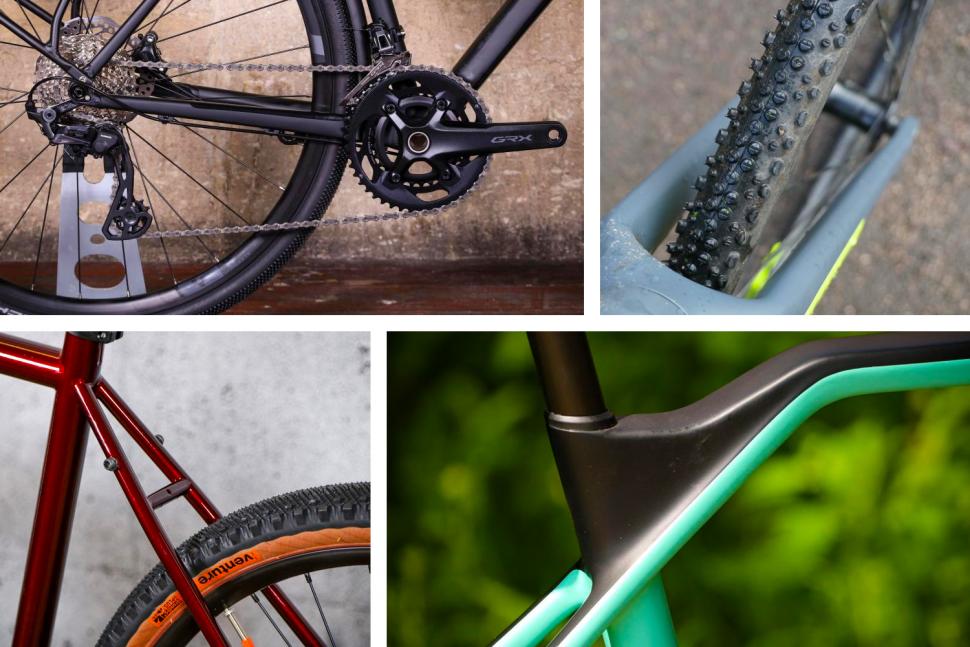 Cyclocross v gravel bikes: get to know the clever differences that set them apart

What’s the difference between a cyclocross bike and a gravel bike? It’s a question we see asked a lot, as more and more bikes are launched in the gravel bike niche. Let’s try and clear things up.

According to our resident cynic VecchioJo Burt the difference between a cyclocross bike and a gravel bike is “£200”. It’s a bit more complicated than that.

Bike industry labels for bike varieties often confuse people because they usually don’t refer to discrete categories but to points on a spectrum. That means what's labelled a gravel bike can be very similar to a cyclocross bike, especially if you don’t dig deep into the specs.

What are they for? 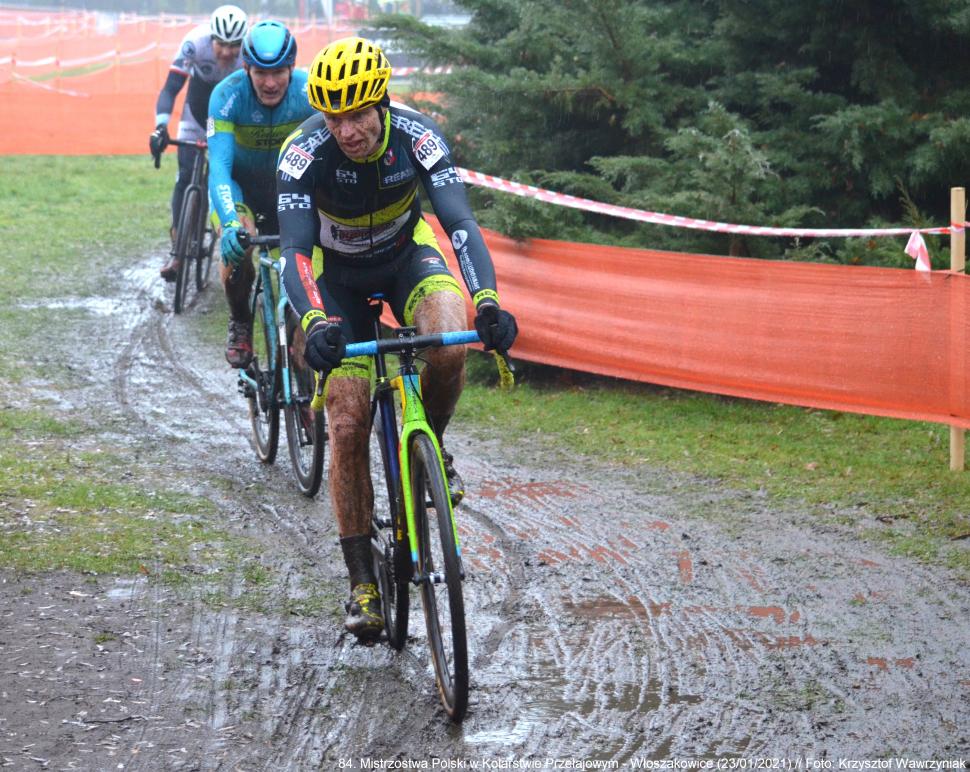 Form follows function so to kick off, let’s look at what these two bike types are for.

Cyclocross is a bike racing discipline that involves riding a drop-handlebar bike on a short, off-road course, usually in a park or similar. Courses include features like mud, sandpits, barriers and steps or slopes too steep to ride, forcing riders to run, as well as easier sections. An international-grade course has to be between 2.5km and 3.5km long. An elite-level cyclocross race lasts an hour and a lap; other race categories are shorter.

A cyclocross bike is designed specifically for this form of racing, and, as we’ll see, its design serves its purpose of going fast, and being able to be carried when the terrain demands.

>>Read more: Buyer's Guide to cyclocross bikes - how to choose the right one for you
>> Read more:  Beginner's guide to cyclo-cross essentials 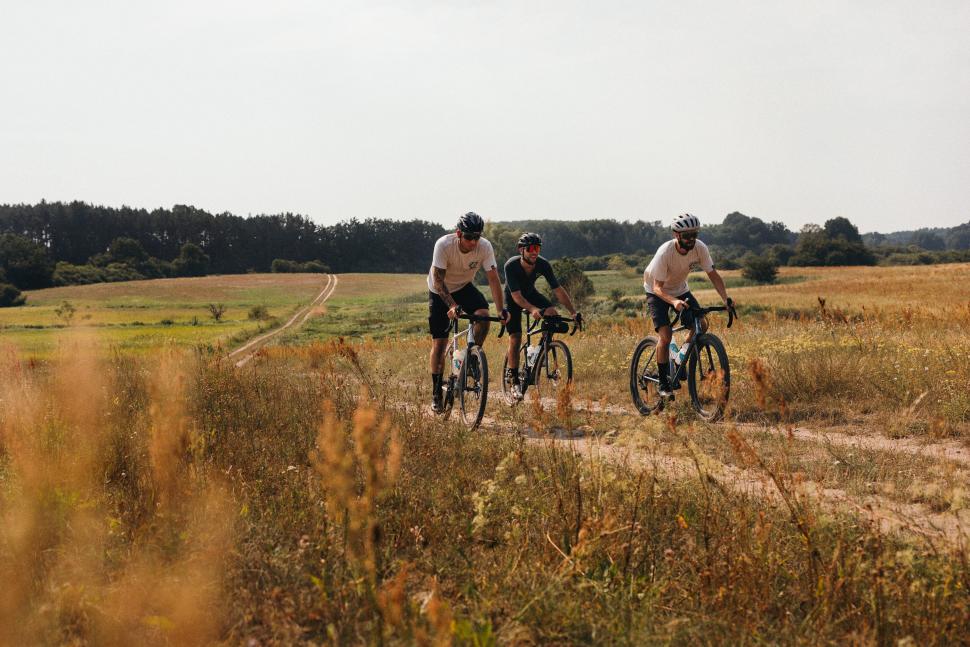 While there’s an emerging discipline of gravel racing in the USA, most gravel bikes are not purpose-specific racers. Rather they’re designed for long days in the saddle on a mixture of surfaces and terrains and for riding with various types of luggage on multi-day trips.

The key difference between gravel bikes and old-fashioned touring bikes is the baked-in ability to tackle unsurfaced trails, tracks and dirt roads. People took touring bikes off the beaten track in the era before the mountain bike, but fatter tyres make it much easier and more comfortable. A gravel bike combines the multiple hand positions of a road bike with the go-anywhere abilities of a mountain bike.

What design and feature differences come out of these purposes then? 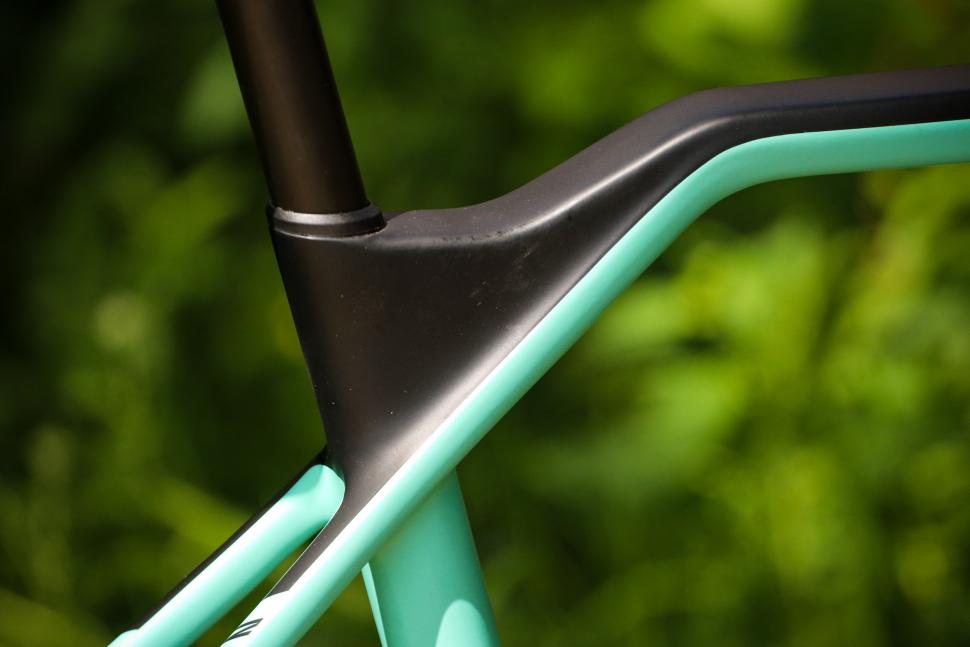 A cyclocross frame has to be light, because the bike built around it will be carried. That means pared-down aluminium and carbon fibre frames are the norm.

Gravel bike frames are usually a bit heavier, because they need to be stiff enough to carry loads.

A pure cyclocross frame won’t have eyelets for mudguards or racks, because you’ll never need them for racing. But they’re a feature of gravel bikes because you might want to racks to carry luggage, and mudguards to help keep you dry.

A frame’s geometry — the angles and lengths of its various tubes — determines how it handles, and here there are significant differences.

A cyclocross bike will usually have a head tube of around 73° for quick turns, while a gravel bike’s will be a degree or so shallower for steadier handling. And some gravel bikes, like the Fustle Causeway GR1 with it's 69° head tube are heading along the path that's taken mountain bike head tubes down to around 66°. 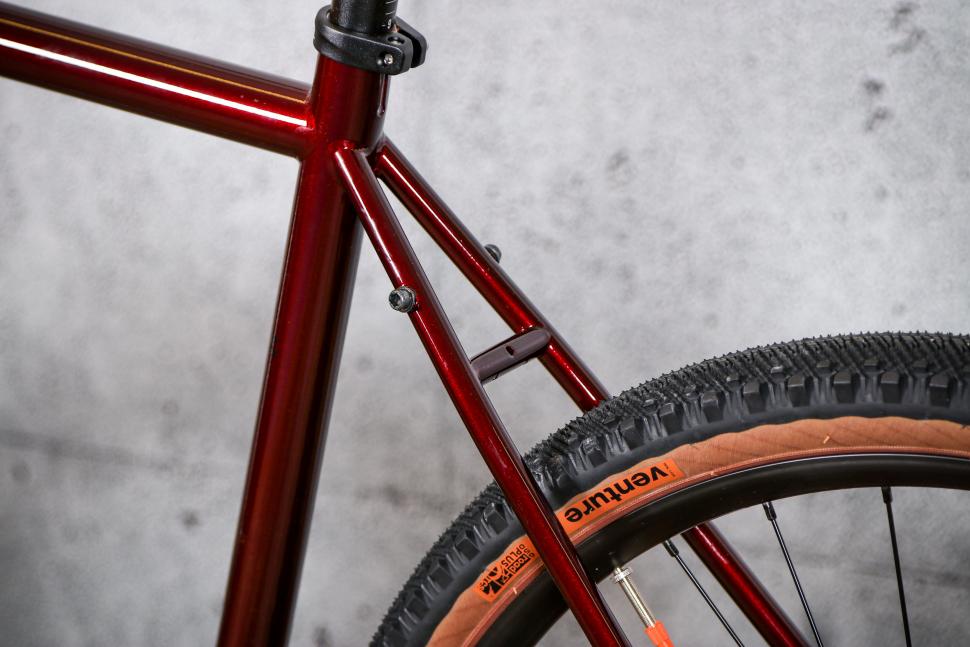 Out back, a gravel bike will have longer chainstays so there’s heel clearance for panniers. A cyclocross bike typically has 425mm chainstays; on a gravel bike — especially one intended to double as an expedition-touring 'adventure' bike they’re as long as 465mm.

Of course this wouldn’t be the bike industry without glaring exceptions to general rules. Specialized’s carbon fibre Diverge gravel bike has cyclocross-style 425mm chainstays to tuck the back wheel in for more traction on steep climbs.

There are also cyclocross bikes with rack and mudguard eyelets, because bike makers recognise that many riders have picked up ’crossers as fast urban pothole-bashers. Many of these bikes have morphed into gravel bikes or adventure bikes in the last couple of years. The Pinnacle Arkose range from Evans Cycles is a good example. It was originally billed as a cyclocross bike, but now has fatter tyres and Evans calls it an adventure bike.

Read more: Buyer’s guide to gravel and adventure bikes plus 16 of the best 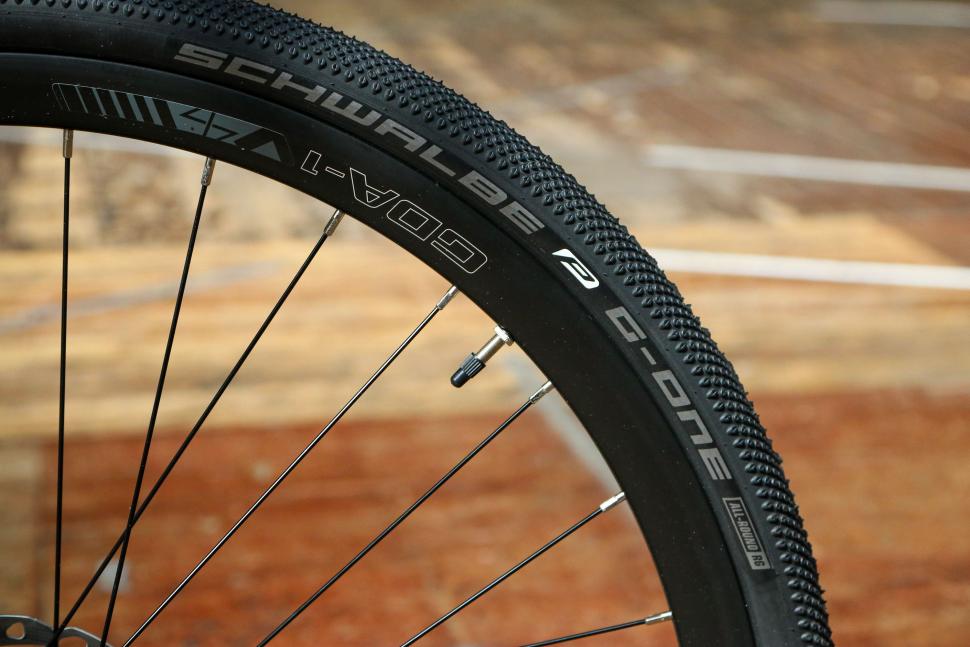 The rules set by cycle racing’s governing body, the UCI, say cyclocross tyres have to be no more than 33mm wide. There’s usually room in a cyclocross frame for tyres that are a bit wider than that, and there’s room for mud clearance, but gravel bikes will typically take much bigger tyres. Trek fits 2.0in tyres to its 920 adventure tourer, while Mason's dramatic InSearchOf will take 60mm wide 700C tyres. 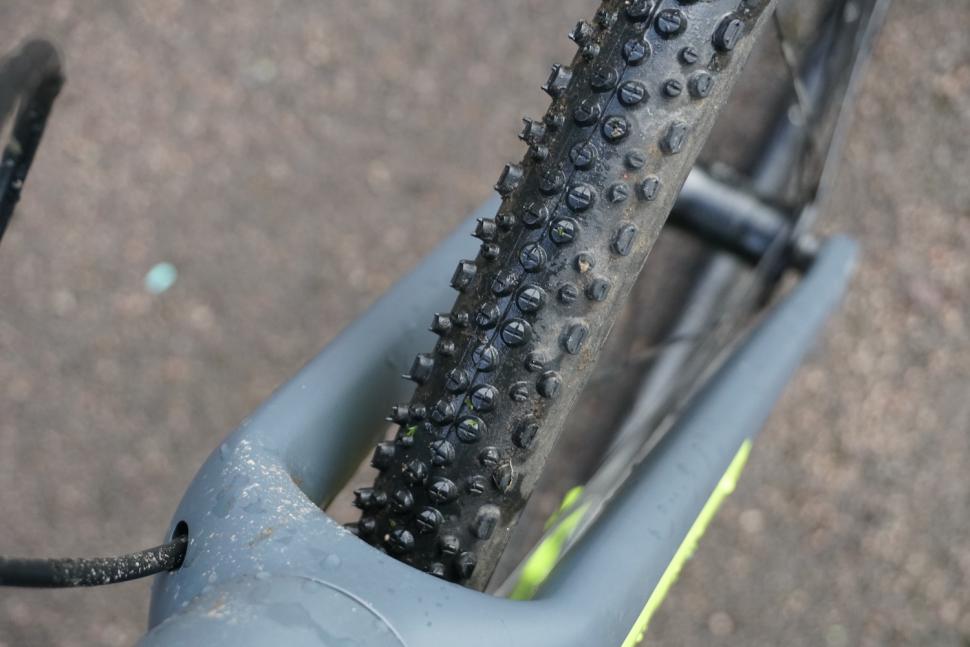 However, some, like Cannondale's Topstone bikes, just go a bit fatter with 37mm tyres, while Kona's Rove Ltd has 47mm tyres and 650B wheels, the ‘middle’ size used on mountain bikes. Gravel/adventure bike tyres have definitely got wider in the last couple of years, and that big tread energy has widened the gap between them and cyclocross bikes.

Tubeless-ready wheels are increasingly common on both cyclocross and gravel bikes. Tubeless tyres aren’t susceptible to pinch punctures caused by the tyre bottoming out on the rim — there’s no tube to pinch. They can therefore be run at lower pressures. That means more grip and a comfier ride off road and on. 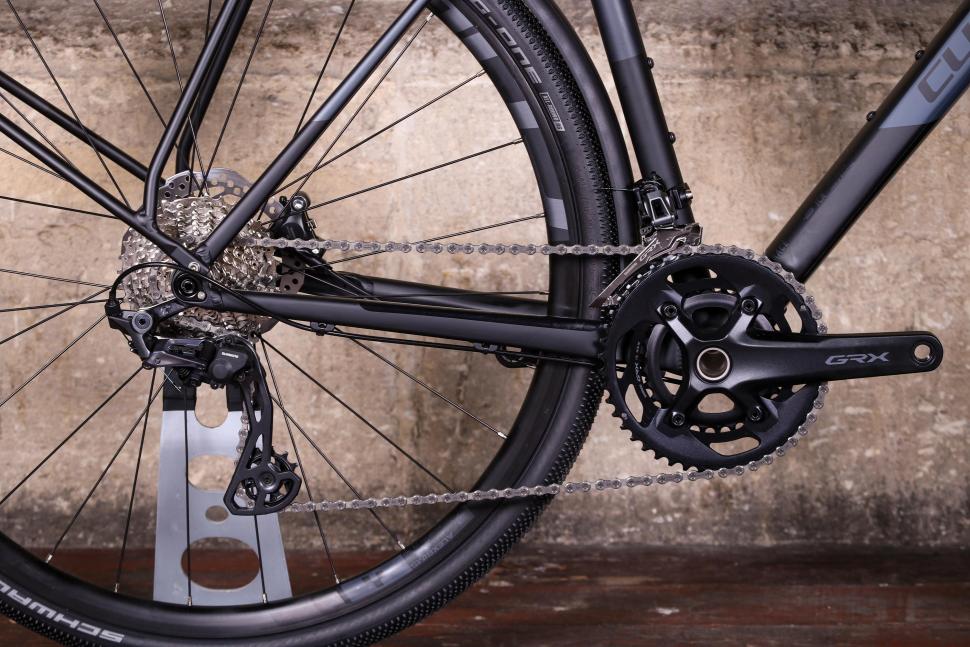 Classic cyclocross race gearing combines a 46/36 chainset and a medium-wide cassette like an 11-28. You don’t need the high gears of a road bike because you won’t be zooming downhill at over 40mph, but you still need fairly low gears for climbing the course's more rideable slopes.

Gravel bikes have wider range gearing, but may sacrifice some top end to get lower ratios at the bottom. A 48/31 or 46/30 chainset with an 11-34 cassette is common, and a few bikes widen the range with a 42/28 chainset, or use the ability of the GRX400 derailleur to run an 11-36 cassette. Others go for the simplicity of a single-chainring system with 11, 12 or even 13 rear sprockets.

If you’re an old fart like me, you might be surprised that almost no gravel/adventure bikes have a triple chainset. You could get a bigger range with an extra chainring, but even I have to admit you get a pretty useful range when you combine a 42/28 with an 11-36 cassette.

For workshop tinkerers there are so many reports of 105 and Ultegra GS rear derailleurs and GRX derailleurs for double chainsets shifting fine across 11-40 cassettes that it's now almost a standard recommendation. a 46/30 chainset and 11-40 cassette is a combination you're unlikely ever to see on the start line of an elite cyclocross race. 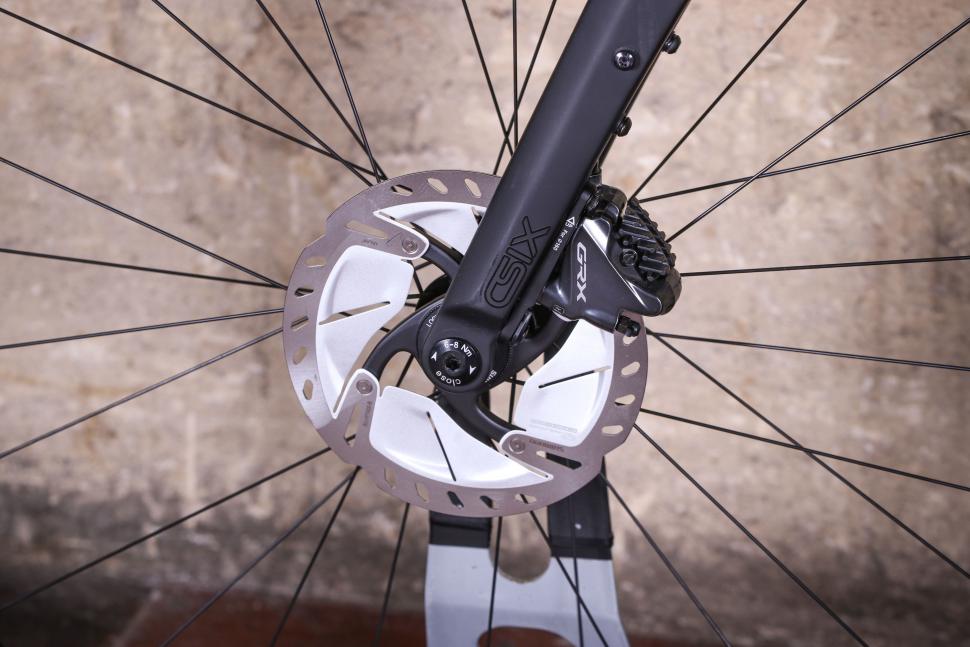 If the UCI hadn’t given the green light in 2010 for cyclocross racers to use disc brakes, the gravel bike category might never have happened — or at least not happened so quickly.

Every gravel bike we can find uses disc brakes. As well as their advantages in stopping power and consistency in the wet, discs have a very big advantage for bikes ridden on lousy surfaces: they’re not affected by rim damage. This is well worth the extra few grams over cantilever brakes. 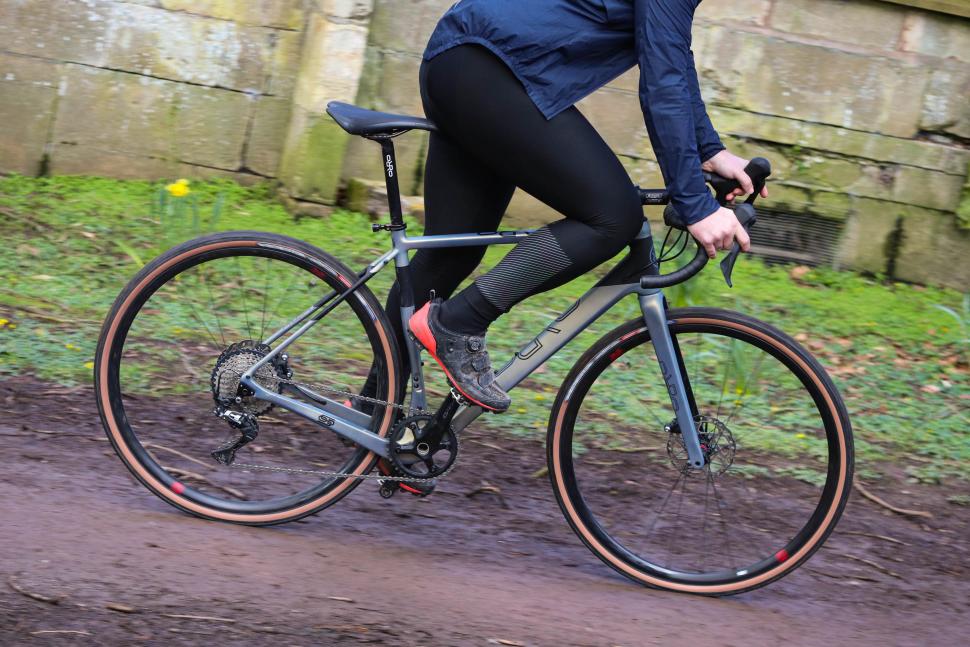 In their purest form cyclocross bikes have a very narrow purpose and that leads to very specific frame design and features. They’re brilliant for cyclocross racing but limited as all-rounders by their lack of provision for mudguards and racks, their relatively narrow gear ranges and inability to take very fat tyres.

For many, the riding position of a pure cyclocross race bike will be too aggressive; fine for an hour and a lap exploring the upper limits of your aerobic range, less ideal for a full day exploring lanes and trails.

Gravel bikes take ideas from cyclocross bikes and throw in fatter tyres from mountain bikes and hybrids, wider gear ranges from touring bikes and all-day riding positions from sportive bikes. The details of the mix vary between manufacturers, but they’re clearly a new, distinctly separate breed.

If you fancy expanding your riding to include dirt roads and trails, but want to get there on the road, the good news is you have plenty of choice. Think about the riding position you prefer, how you’re going to carry luggage — if at all — and the gears you need and take it all into account when you make your choice.