Bike locks: how to choose and use the best lock to protect your bike

It’s a gut-wrenching, awful feeling. You step out of a shop, cafe or pub and instead of your beloved bike there’s an empty space and the remains of the bike lock that, it turns out, just wasn’t up to the job. Here’s how to stop this happening to you.

Bike theft is a serious problem that makes a good bike lock a vital piece of cycling kit. The level of theft has dropped from its mid-1990s peak, but hundreds of thousands of bikes still go missing every year. According to Cycling UK, from July 2018 to June 2019, there were 287,000 incidents of bike theft in England and Wales (still bad, but down 49% from 1995).

As several readers pointed out on the last version of this article, the best way to stop your bike getting stolen is never to leave it unattended. That's fair enough if all your riding is one sort or another of sporty fun, but it's not practical if you're riding to the pub or the shops. Then, you need a bike lock.

Nobody wants to be a victim of bike theft. Here’s how to protect yourself and your bike.

Always use a high quality bike lock. Look for at least silver and preferably gold Sold Secure rating. These ratings indicate that the lock can’t be quickly broken. They’re generally not cheap, but you can get Sold Secure Gold bike locks from about £20, a modest investment. Make sure you use it even if you’re only leaving your bike for a few seconds. 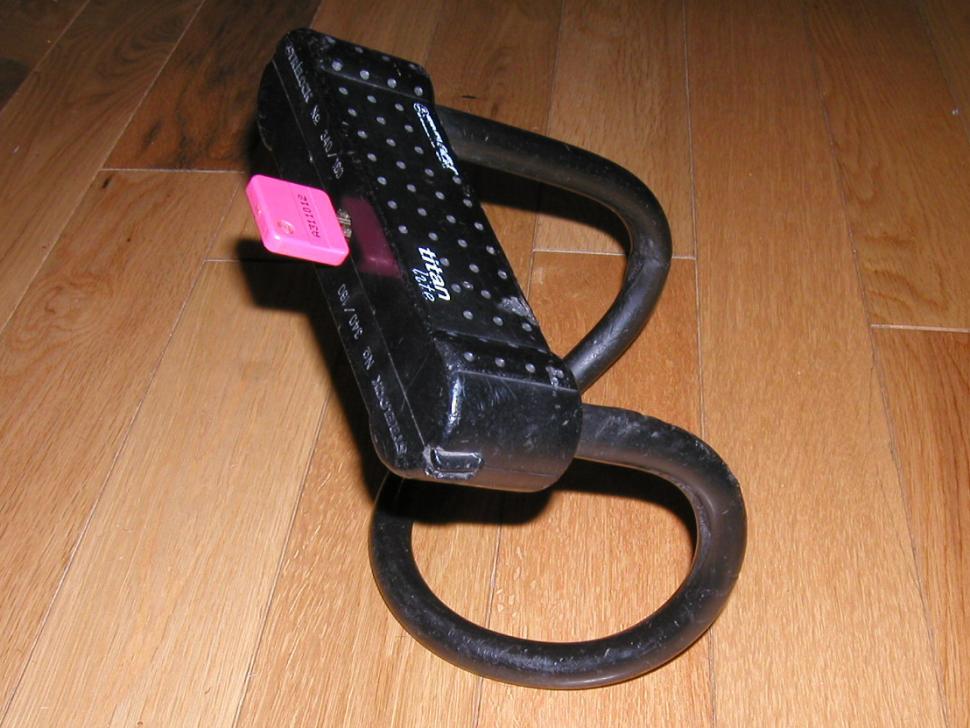 The best U-locks are incredibly tough. This one was bent but didn't break during a theft attempt. (CC BY-NC-ND 2.0 by Alan)

>>Read more: The best bike locks — stop your bike getting stolen with our selection

Park in a sensible place. Use secure bike parking if it’s available. Even for a price, your bike will be far better protected from theft inside a designated secure location rather than on the street, no matter how well you think you’ve locked it up.

If there’s no secure parking, lock your bike in a place that’s as public as possible. If you leave it in a secluded location, it will give any would-be thief time to work on your lock undisturbed. That said, don't depend on strangers to get involved if your bike is being stolen. Reader hampstead_bandit used to work in a bike shop where they had a friendly locksmith who would help customers whose bikes were genuinely stuck. He said he would cut locks in broad daylight in busy locations and no one would bat an eyelid.

Lock it to a solid, immovable object. Look for something that can’t be moved and is hard to cut. Railings are good, as are sturdy street signs. The classic inverted-U Sheffield rack is decent as long as it’s in a public place. In some spots where these racks are away from constant view, thieves have cut them to steal bikes. Check any Sheffield rack for such damage as it may not be instantly obvious. If there's any tape around the rack, peel it off and make sure it's not hiding a cut.

Protect the mechanism. The lock mechanism itself is often the weakest part of even a good U-lock. Position it so it’s as inaccessible as possible. Locking to railings helps with this as you can put the mechanism on the other side where it can’t be attacked. This also helps prevent a lock disabling attack. (See ‘Beware knavish tricks’.) 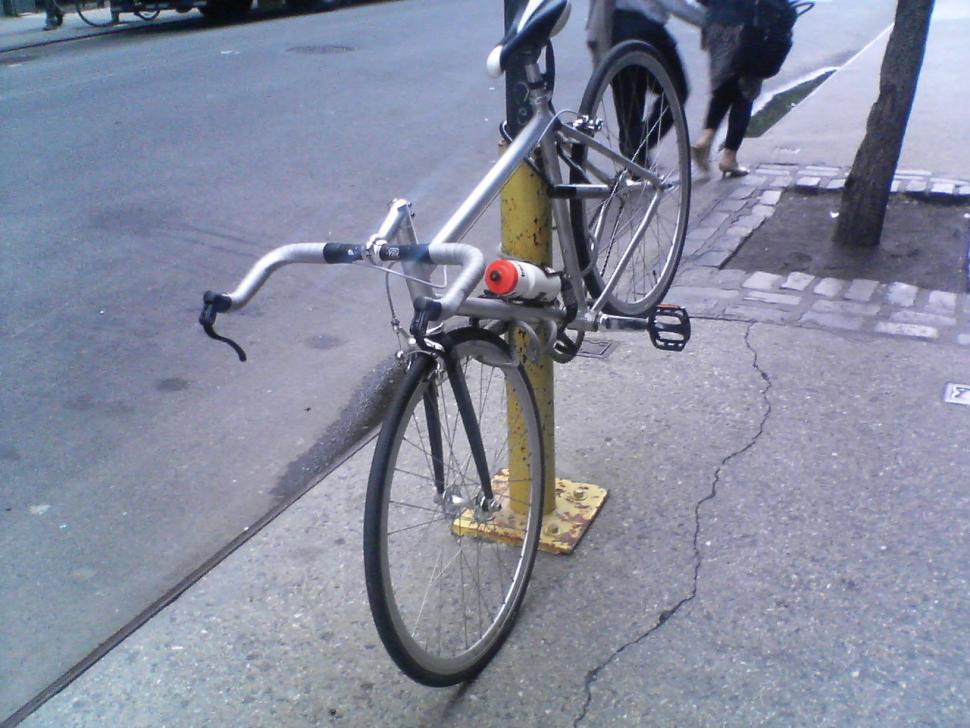 Use two bike locks. Put one lock round a wheel, the frame and your locking point, and one around the other wheel and the frame. If possible get the second lock round your solid object too. An alternative to stop a wheel being stolen is to use locking skewers.

Fill the shackle. If you’re using a D-lock, then the more of the space inside the D is occupied, the harder it is for a thief to get something in there to pry the lock open. If you’re parking a bike for a while, consider taking the front wheel off and putting it in the lock. With the frame, rear wheel and whatever you’re locking to that should amply fill the lock.

Beware knavish tricks. If you come back to your bike and it has a puncture, or the lock has been damaged or the mechanism filled with glue, find a way to take it home anyway. Thieves sometimes disable a bike so you’ll leave it and give them time to come back with power tools to break the lock. If necessary, break the lock yourself. Hiring an angle grinder will cost you about £20 for the day. Another trick thieves are now using is to cut through Sheffield stands and similar racks then cover the gap with gaffer tape - so beware of that ruse, too.

On a previous version of this article, reader giskard commented: "I doubt you'd be very successful trying to get your hands on a portable angle grinder when you've found your lock has been sabotaged at the end of a day in the office. And tool hire shops aren't exactly plentiful. Apparently you can subvert the old superglue-in-the-lock trick by making sure you squirt plenty of oil in where the key goes." 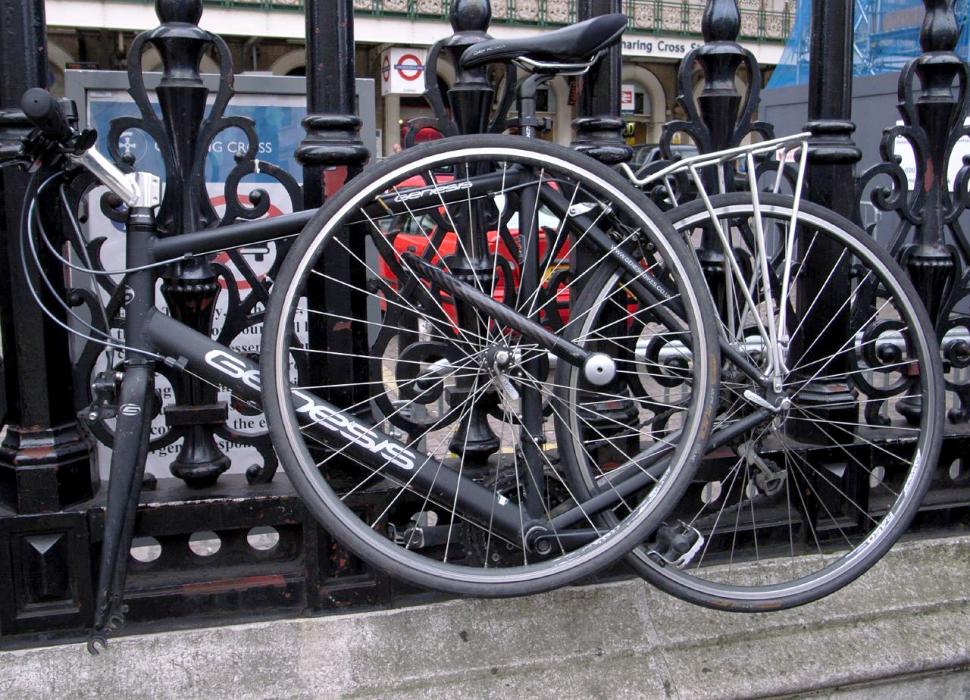 Take accessories with you. Bike lights, tool bags and pumps are all easy targets for light-fingered toe-rags. Take them off your bike and take them with you.

Be a cynic. Lock your bike near bikes that are not as well secured and more attractive than yours. It’s like the old joke about not needing to run faster than a bear to be safe in the woods; you just need to be able to run faster than your hiking companions.

Protect your parts. This advice comes from reader Big Softy who says: "The scrotes are also nicking high-end shifters, brakes, etc. Easy to flog and almost untraceable. You can prevent this by putting a ball bearing with a couple of drops of epoxy into any Allen head fixings. When you need to do repairs you can prise it out with a small screwdriver. It'll deter the average opportunist dirtbag."

Lock your bike securely at home too. Even better, bring it indoors. If you can’t, then invest in some serious security for your shed or garage such as a ground anchor or shed wall reinforcement.

Register your bike. A service such as Bike Register, will physically mark your bike with an identifying feature and link it to your identity on the police database. Certain councils and police constabularies offer free solutions, and there are alternatives to Bike Register.

Report it if gets stolen. Some police forces now take try and bike theft far more seriously than they once did, though it's a bit of a postcode lottery. Reporting stolen bikes helps give them the ammunition to keep it a priority.

Hide messages inside your bike. Put scraps of paper in various places that say “This bike was stolen”, with your phone number or email address. Suitable places include the inside of the seat post, taped round the steerer column, inside the handlebar stem and taped inside the rim well. One day an inquisitive mechanic or police stolen goods recovery team might make your day.

Make your bike undesirable. If you have a round-town bike and you don’t really care about how it looks, paint it all over — wheels, tyres, gears, the lot — with cheap spray paint. Pink is the best colour for theft prevention according to road.cc reader Neil753 who suggested this tip. It certainly raises the suspicions of Coventry police who once apprehended a drug dealer because they suspected the pink bike he was riding might be stolen. 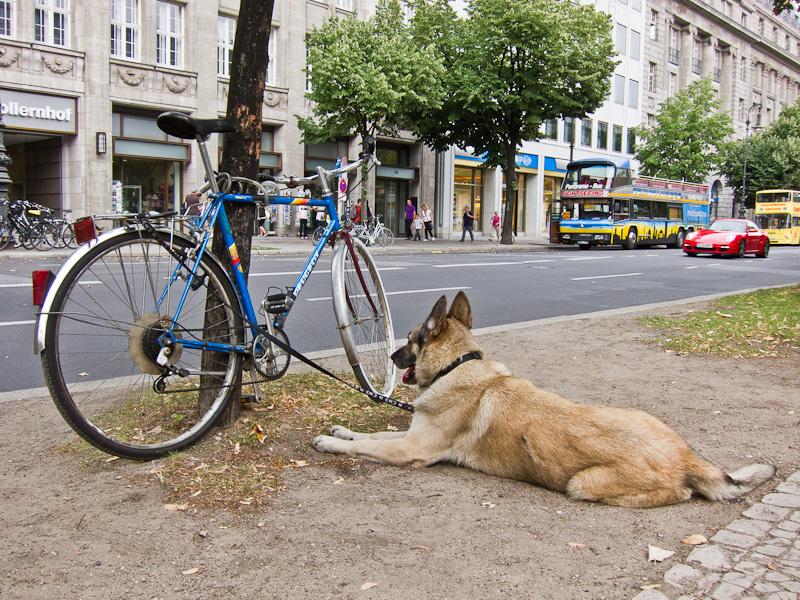 Thanks to road.cc readers jasecd, Dr. Ko, The Rumpo Kid and obutterwick whose suggestions were included in an earlier version of this article.