The Science of Cycology: can you draw a bicycle? 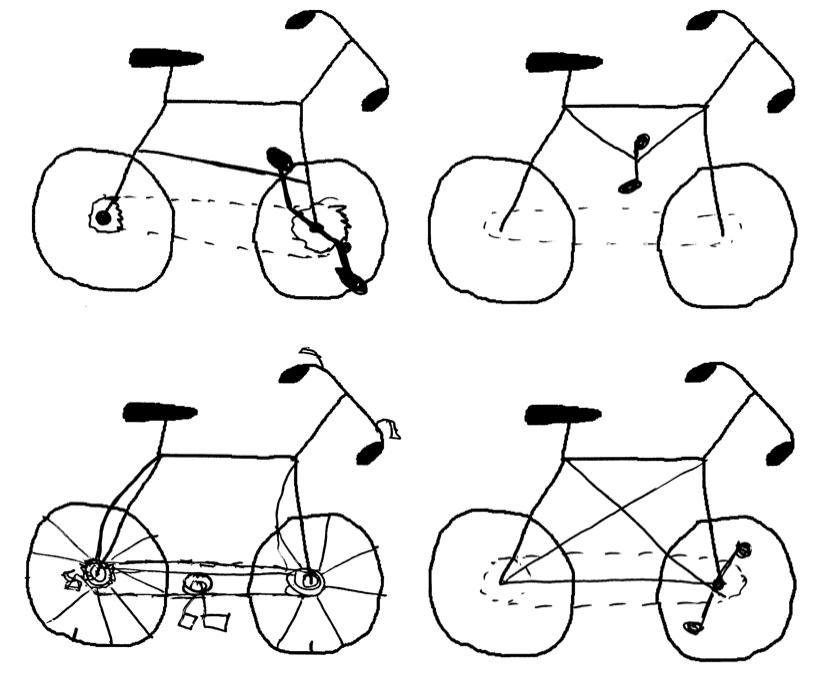 I work as a cognitive psychologist at the University of Liverpool and I investigate how we recognise everyday objects in our world. Recent research indicates that we may be deluded into thinking that we know more about objects in our world than we really do. Kevin O'Regan has suggested that we may use the world as an "outside memory" to save us from having to store huge amounts of information. Since this information can usually be found simply by moving our eyes, we do not need to retrieve it from our brains. In 2002, Leonid Rozenblit and Frank Keil argued that, in particular, we overestimate our ability to explain how things work - whether artefacts like greenhouses and bicycles, or natural phenomena like tides and rainbows. They suggested that this illusion of explanatory depth is especially severe for objects with visible parts. Rozenblit and Keil's conclusions were based only on people's self-ratings of the quality of their explanations. I wanted to extend their work to measure how accurate people's explanations really are, to see how well people understand how everyday objects work. The bicycle is an obvious choice to test this.

Firstly, bicycles are familiar objects even for non-cyclists. I have given the test to over 200 students and parents coming to Open Days at the University. Over 96% had learnt to cycle as children with a further 1.5% learning as adults and less than 3% never having learned. Also 52% of this group owned a bicycle. Sadly, the figures on actual cycling were low, with just 1% cycling most days, 4% cycling around once a week and 9% cycling about once a month. The vast majority either never cycle (52%) or rarely do so (33%). Nevertheless, even for these non-cyclists, bicycles are a common sight. Secondly, if Rozenblit and Keil are correct, people should greatly over-estimate their understanding of how bicycles work because bicycle parts are visible and they seem to be simple, mechanical devices.

Figure 1. The drawing response sheet for the Draw-A-Bicycle task.

I first asked people to draw a bicycle and I then asked them to select which of four alternatives were correct for the frame, the pedals and the chain, see Figure 1. I used the multiple choice test to check that errors that people made were not just due to problems with drawing or in my judgement of the accuracy of their drawings, see Figure 2.

Figure 2. The multiple choice questions for the Draw-A-Bicycle task.

CIRCLE which one of these four bicycles best shows the usual position of the frame:

CIRCLE which one of these four bicycles best shows the usual position of the pedals:

CIRCLE which one of these four bicycles best shows the usual position of the chain:

I looked at three types of errors which would severely impair the functioning of a bicycle (see Figure 3 for examples of all three):

1. drawing the frame joining the front and back wheels (making steering impossible)

2. not placing the pedals between the wheels and inside the chain (the pedals were sometimes drawn attached to the front wheel, the back wheel or dangling off the cross-bar)

For the first group of 64 non-cyclists that I tested, many errors were made, specifically:

People made lots of fundamental mistakes. For example, over one third thought that the bicycle chain runs around the front as well as the back wheel of the bicycle. The data can seem rather dry, so here are some comments that people made:

"I think context matters, I know a bike when I see it but it's different to recall (it) when sat in a room"

"Thinking about it in more detail, I realised I had no idea about its structure"

"I can't believe I found it so difficult to remember what a bike frame looks like!!!"

"It's hard to picture a bicycle when you have to"

"I did not think long enough about the front wheel turning"

"I never knew how little I knew about things until I had to draw them".

I was concerned that people might have made lots of errors in the first experiment because they were concentrating on trying to produce good-looking drawings of bicycles rather than trying to draw functionally viable bicycles. To address this, in the second experiment, before they started the Draw-A-Bicycle test, I gave them a heavy and rather patronising hint about what the task was about. I told them: "I am not interested in your drawing ability. It does not matter if your lines are wobbly or whatever. What I am interested in is what you know about how bicycles work. I want to make you think about what the pedals of the bike do .... and what the chain of the bike does ... and why the frame of the bike is a particular shape ... and how you steer a bike. So I want you to think about how a bike works before you draw in the parts". In a group of 94 non-cyclists I found:

Compared to Experiment 1, giving a function hint did not reduce errors at all in Experiment 2.

In the first two studies I found that non-cyclists made many fundamental mistakes when showing how bicycles worked, even when I gave them strong hints about what was important in the task in the second experiment. Would regular cyclists have a good, functional knowledge of how bicycles worked? I tested 31 cyclists at the Merseyside Cycle Campaign's Annual General Meeting and another 34 cyclists thanks to the Liverpool Wheelers, Cambridge University Caving Club and a few other random souls. These cyclists showed - hurrah - much reduced errors on the task. However even cyclists were not perfect:

Experiment 4 - non-cyclists with a real bicycle to look at

At the start of this article I mentioned O'Regan's suggestion that we could use the world as an outside memory. Developing this idea, I wondered how well non-cyclists would do if I showed them an actual bicycle whilst they did the study. I tested 58 people and, yes, these non-cyclists were now at least as good as cyclists, supporting O'Regan's argument:

This study also shows that the errors made by non-cyclists in the first two experiments were not due to them being unable to draw bicycles or not trying to do well. Non-cyclists can succeed at the task but only if they are helped by being given a bicycle to look at. Interestingly, people's comments suggested that they sometimes misinterpreted their success at the task as being due to their stored knowledge about bicycles. They said things like "I realised I knew more about bicycles than I thought". However others realised that they were helped by being shown a real bicycle that they could copy. They commented "looking at the bike made it easier to remember how it worked" and "I have never had to consider this problem. Helped by looking at the bicycle".

I am still collecting data on the Draw-A-Bicycle task but what do the results suggest so far? It seems that many people have virtually no understanding of how bicycles work. This is despite bicycles being highly familiar and most people having learnt how to ride one. Most people know that turning the pedals drives one or both of the bicycle wheels forward, but they probably understand little more than this. People's performance improves - but is still not perfect - if they either have increased experience with bicycles (in Experiment 3, testing cyclists) or if they are shown a bicycle that they can copy (in Experiment 4). I had hoped to look at whether cyclists made fewer errors because they had seen and used bicycles more (so gaining perceptual and motor experience) or whether it was time spent repairing bicycles that helped them (an increased functional experience). Unfortunately I did not have enough data to look at these two effects separately - most people who cycle a lot also do at least basic bicycle repairs; likewise most people who repair bicycles also cycle fairly often.

As far as cognitive psychology is concerned, though, the main finding of interest is how sketchy and shallow most people's understanding of bicycles is. Frank Keil argues that this minimal, superficial understanding is actually beneficial. It lets us efficiently interpret the world and make accurate, causal predictions without overburdening the limited processing and storage resources of our brain. We will almost always be able to just look at a bicycle whenever we need to know how it works. Why, then, should we bother trying to learn this information before we need it and then having the problem of needing to store this understanding in our limited-capacity memory system?

One last thing: unexpected sex effects. One finding that I was not looking for jumped out from the data. There were huge sex differences with females making many more errors than males. First, combining all the data from the first three experiments for people who said they never or rarely cycled, errors for these non-cyclists were:

Thus, at least for frame and chain errors, females make around twice as many errors as males. It could be argued that this is still a matter of experience. It is likely that boys cycle more than girls so many males who currently rarely cycle may have, over their lifetime, seen and used more bicycles than females. However the sex difference is even more extreme for those who claim to cycle around once a month, once a week or most days. Errors for these cyclists were:

From these results it seems unlikely that the sex difference is just down to a greater experience with bicycles for males. Not only do male non-cyclists make fewer errors than female non-cyclists, they also make fewer errors than female cyclists; whilst male cyclists make almost no errors. Why? It might be that men generally have a better functional understanding of objects. To look at this, I have tried similar tests as the Draw-A-Bicycle test with objects such as rowing boats and cranes. However here I have found no clear sex differences. Let me know if you have any other suggestions that I could try testing.

I will be writing this up as a (dull!) academic paper. If you would be interested in seeing this, email me and I will send you a copy of that when it is ready. Thanks once again to those of you who did the test for me. Do email if you have any queries or suggestions about this work. I am particularly interested in any ideas why so many people think that the chain goes around the front as well as the back wheel. My email address is: rlawson -at- liv.ac.uk