A day in the life... Lotto Belisol training camp

Lotto Belisol 2013 training camp
David draws the short straw and heads out to Spain to see the Lotto Belisol professional cycling squad in training in 20° sunshine, under cloudless skies. Git

I'm here in sunny Benicassim, north of Valencia, with the Lotto Belisol professional cycling team a they undertake their last training camp before embarking on the 2013 race calendar. It's taken my eyes some time to adjust to the cloudless blue sky and bright yellow thing up there I can tell you. The car park is abuzz with activity before the ride. Last minute tinkering, one rider adjusts his saddle, another his cleats. Others just sit perched on the top tube of their bike waiting for the shout that signals the start of the ride. The entire team isn't here, Andre Greipel, Adam Hansen and others have flown to Australia for the Tour down Under. They've left behind 19 riders who are preparing for the classics season which is now just a few weeks, (okay, about eight), away. The riders get their instructions from the coach and sports director

Today, we followed one half of the group on a four hour training ride that included six sprint intervals. The hotel is close to the coast and the first few miles feature mostly rolling roads. A small climb over the ridge of hills that dominate the landscape looking west, and the sports director finds a suitable road; free of traffic, smooth, mostly flat with a kick at the one end. Following the riders in the van, they sure make it look easy. They're still pushing quite hard, they just make it look effortless This white bucket, very low tech, marks out the finish line at the end of a designated 2km section. The group of riders – there's nine in total – are tasked by the coach to perform a series of simulated sprint finishes. There's the classic lead out for starters, a lone breakaway rider given a good  head start is chased down, and several other scenarios are acted out. 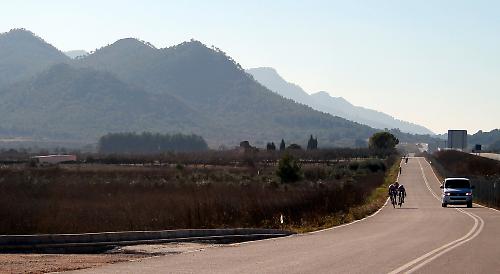 The team conduct several sprint sessions like this at early season camps, as it's the only time the team will be together. Some riders only see each other at these camps, so it's important to put in some valuable practise. One thing I noticed, they're always eating. From the first few miles they're drinking and scoffing bars. At the brief lunch stop they get given this sort of cake/malt loaf. Looks yummy, where's ours. Afterwards it's a gentle 1.5 hour ride over mostly flat roads to cool down before returning to the hotel for a pasta party. 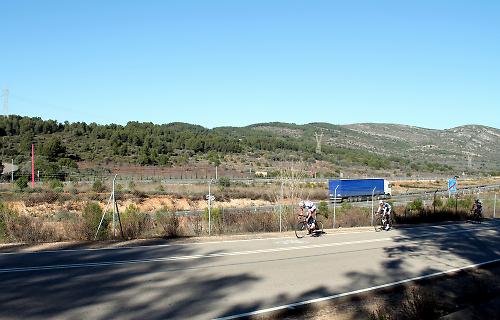 Who said cycling was glamorous? A nondescript road with a motorway backdrop and a small crowd of journalists look on as the team practise sprinting, which will come in useful throughout the season. Ducking and weaving, the riders simulate race conditions as much as possible It might just be training, but they still take it seriously