Silence in the peloton: Myles McCorry calls for a bit of peace and quiet 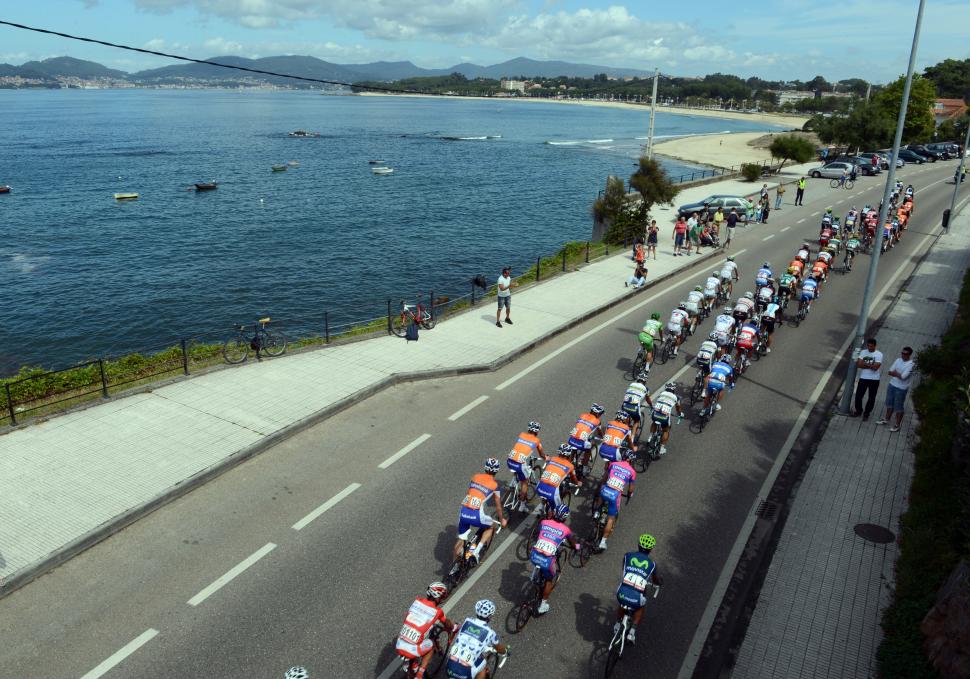 Vuelta 2012 S10 landscape (copyright Unipublic:Graham Watson)
Shouty cyclists spoil the fun of racing - let the legs do the talking instead

There are times when words don’t need to be said. When the spoken alphabet adds nothing to the world. I didn’t need to ask the bloke sitting much too close at the bar last night, the names of his girlfriends/children, as they were right there, tattooed on his neck. I don’t need to ask a teenager what shop they got their sweater in, as it is right there, written all over the front of it.

Sometimes there is just too much talk. Like the middle aged whiners in the supermarket queue. “You would think they would put some more people on the checkouts” with a nudge in the kidneys from their calorie laden basket. Unnecessary words. I look forward in case my mouth says what my brain shouts “Just fecking wait a minute, its not as if you’re a bomb disposal expert on call or late for an appointment to meet the Syrian foreign minister with ‘the’ plan - No, then …Shhhssssss."

There is never too much talking on bike training spins. If you couldn’t tell someone the deal you got on the new wheels or lie how little training you do if you are good, or how much you do if your not so, then bike training would be emptier. But, when the training turns to competition, I argue the mouths go closed.

Cycle racing is among the toughest of sports, at the professional level THE toughest. For the most of us, a three-hour romp around country roads should be nothing but smile inducing. We should tackle each gravel-covered corner with a ‘whoop’ and ‘yeeHaw’. Riding your bike is mighty; riding it at speed, in a rolling break, with the peloton out of sight is the closest thing to ethereal heaven on earth. Some could argue it is better than sex, and yet ALL of our cycling joy can be spoiled by some insecure muppet barging at the top of his voice.

Words barked, when the flick of an elbow or the point of a finger are fine. I started to wonder if the road racing scene could be held in silence. The soft whizz of 140psi in the tyres and the regular clang of an ill fitted valve in a carbon rim. It would be beautiful. An exception could be made for the “Car up / down’ safety warning for the tiring riders and the “YeSSSS” for the victor charging across the line, but the rest …shhhssssssss.

Imagine it, no panicky ‘hold your LINE” comments, spoken by those who weren’t looking at the road ahead (trust only your own eyes) or yappy “Do some work!” Do some work!! WORK… nowhere is it written that a rider should do any work at the front. There is a duty of honour within cyclists to share the load in a break or to isolate one. Victories not earned, have no pride, but it is up to the individual. At NO point does anyone have to go to the front. Nor should it be demanded, loudly.

If you are known to shout: ”Work for phuck sake Work!”  Not only are you wrong, but you are wrong at the top of your voice.

The very worst of all is the ‘up UP UP” shout from some one deep in the bunch. It denotes a valiant attack from a marked rider. Marked by a Fred that expects someone else to bring him back. Never is ‘’UP, UP ‘‘ shouted from the front, always from a place of lazy shelter.

Just a bit of quiet. Using your mouth for what it was put there for - oxygen transfer.

Twice this season I embarrassed myself shouting at a rider. Twice isn’t bad but has scared me from doing anything but chatting in a peloton for the rest of my days. When racing, the elevated heart rate and nervousness induces the release of into the brain, several hundred different types of chemical messengers (neurotransmitters), which help to speed up reaction time and awareness. Serotonin and in particular Norepinephrine,   (that is believed to be associated with the fight or flight stress response).

“YOU d**khead you phucking d**khead hold your phucking line, are you trying to phucking take down the whole phucking bunch?!
All this is lost energy. All this volume usually comes from a rider on the edge, panicking, who feels his race and ability slipping away.

The only thing slipping away is dignity and respect.

Twice I neurotransmitted a bawl, once at some feckless rider who had let a wheel go. “what the , you MUPPET …wheel..”

Post-examination of the situation revealed that no one ever really WANTS to let a ‘wheel go’. It’s like telling a bald man the situation of less shampoo and more soap - there is no need - they already know. The fault was mine, not his. I should have been better placed in the bunch turning into the crosswind. I should have noticed the rider in front ‘pulling shapes’ as he gave it his all. When the gap went to a bike length it was up to me to notice it. Me yapping at him is blame shifting. My verbal attacks are pointless and shameful.

To those who are guilty of the ‘UP, UP’; train harder this winter or be content with a bunch finish and ShhhHHhhhshhh.

To the ”Hold your (replace any or multiple swear words here) line” army –There are 100 bicycles with riders of different ability moving independantly, in dense formation, on an uneven surface. Expect it, so relax and concentrate and shhHshh.

Myles McCorry is a racing cyclist and co-founder of Bike Pure.