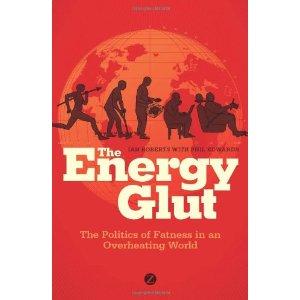 I’ve been feeling guilty about something for over a year now and I figured it was high time I did something about it.

When I was writing news stories for road.cc I spoke to Doctor Ian Roberts, professor of public health at the London School of Hygiene and Tropical Medicine about an article on the subject of road safety – this one in fact.

It was a stimulating and useful conversation – for me anyway – during which Dr Roberts mentioned a book he’d written about obesity in western society and the political and economic links that existed between that, climate change and road safety.

I expressed an interest in reading and reviewing the book, called The Energy Glut, and within a few days I had a review copy sent to me by the publisher’s PR firm.

I read the book with interest, agreed with most of it, then placed it carefully on a shelf, where it has stayed, causing the occasional spike of guilt, ever since.

Well no one likes to live with guilt so now – finally – I’ve resolved to write that review. It’s not as though the obesity epidemic and the issues of climate change and road safety have gone away in the mean time…

Dr Roberts’ thesis is pretty straightforward: as a species we’re increasingly dependent on the motorcar and we’re subjected to a relentless barrage of sophisticated marketing from the food industry to buy cheap, energy-dense food that we don’t really need but that we’re pre-disposed to eat anyway once we've bought it. As a result, people are getting fatter and climate change is getting worse – and both problems are growing quickly. To solve them, all we need to do is resist massive vested political and economic interests, shop, cook and eat sensibly, reclaim our streets and get on our bikes.

I doubt there will be many people on this forum who would disagree with much of that. What makes The Energy Glut so interesting is the way Roberts joins up the dots between these themes, together with the sheer weight of detail – statistical and anecdotal – that supports this central argument. Roberts has a wealth of personal experience to draw on as a paediatrician working in intensive care and a long-time student of the links between energy use, sustainability and health. He also benefits from the expertise of his co-author, Phil Edwards, who is a senior lecturer in statistics at the London School of Hygiene and Tropical Medicine.

The other thing Roberts does admirably is to resist obvious conclusions. So his explanation for the long-term fall in child fatalities on the roads of Britain and America, for example, has less to do with improvements in safety than with the fact that frightened parents have forbidden their kids to leave their homes because of the dangers presented by all that deadly traffic roaring up and down the street outside. He also refuses to lay the blame for western obesity at the door of the individual, preferring to describe it as an environmental problem caused by what he rather grandly calls the petro-nutritional complex.

These are big issues and solving them won’t be easy – particularly when you consider the enormous power of the commercial and political interests in the game. According to the book, in 2008 eight of the top ten Fortune 500 firms were oil companies or car makers (and one of the other two is Walmart, the supermarket behemoth) so there’s a great deal of economic and political muscle intent on maintaining the status quo.

But while we’re scratching our heads about the big stuff, there are small things we can all do, says Roberts. Things like riding bikes instead of driving, lowering speed limits, reclaiming our streets from the motorcar, and changing our shopping and eating habits so we only buy what we need, eat (slowly) when we’re hungry and stop when we’re full.

The bicycle’s role in this transformation is central. Cycling isn’t just fun and good for you, says Roberts, it could play an essential role in our global salvation – tackling obesity, reducing our dependence on oil and thus saving us and our planet.

These are hardly revolutionary solutions, but that doesn’t make them any less valid. This is an elegantly written and solidly backed-up argument about the inescapable wisdom of controlling our personal and societal excesses.

I suppose my only real problem is that the people likely to read this book will already agree with it. Somehow Roberts’ case must be made loudly and widely to create a groundswell strong enough to effect some truly fundamental changes in the world.

But at least someone's shouting about it. And, while I wouldn’t dream of claiming that finally getting round to writing this review will move the cause forward very far, at least I can now rest easy that I’m no longer actively preventing the argument reaching a wider audience.