Updated - Video: "Cyclists are their own worst enemy. They deserve to die!" 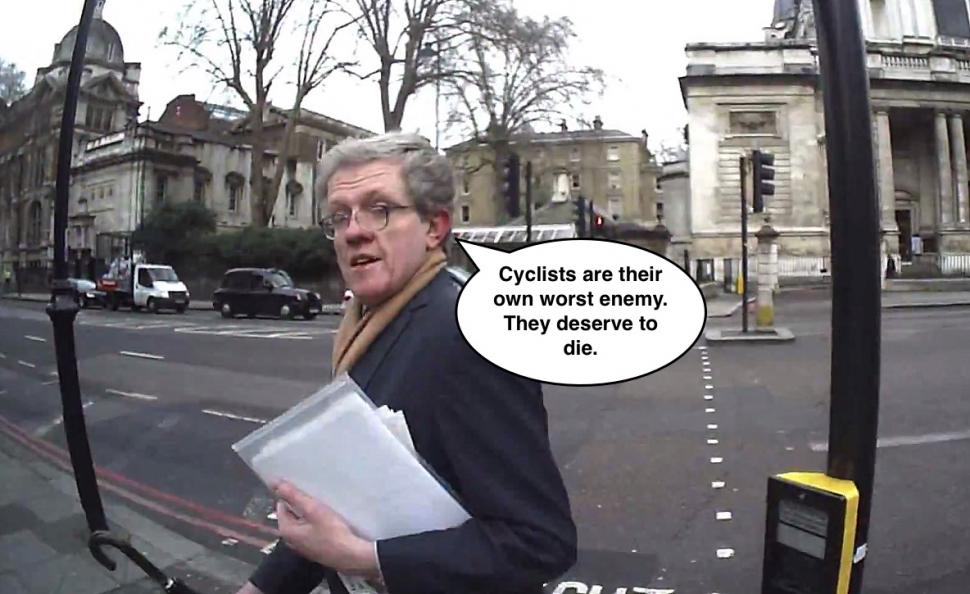 Here's one of the most bizarre helmet camera videos I've ever seen, in which a rider walking her bike, minding her own business and behaving perfectly and utterly legally is subjected to anti-cycling opinions offered unsolicited by a complete stranger.

YouTuber leveret day remains remarkably calm throughout the encounter despite being told that cyclists, including presumably herself "are their own worst enemy" and "deserve to die'. Lovely.

The encounter happened on the morning of Friday November 20 as she was pushing her bike in South Kensington.

She said: "This stranger walked up behind me and started talking to me. Note that this was not the result of any encounter between us as I was actually cycling along. I was just wheeling my bike along, to cross the road at the traffic lights.

"To begin with I thought he was perhaps a cyclist commiserating about recent tragic cyclist deaths with some rather uncomfortable 'gallows humour' … but then he used the words 'road tax' and was alas shown to be just a really vile man.

"I'm not at my most articulate but really I was quite thrown by how to respond to him.

He didn't seem to mind that I had my helmet camera recording so, well, here we go."

Her response is a great lesson in how to remain calm in the face of random unreasonable nonsense, pointing out that nobody pays road tax and despite being trained and licensed, drivers still do reckless things.

I have to wonder though, would this man have offered his odious opinions to a male rider?

A blog entry containing opinions eerily similar to those espoused by the man in this video has emerged. In it, the blogger identifying himself as James Nash writes: "I saw the crash at Victoria station when a cyclist was crushed by a tipper truck and yes, as expected the cyclist was weaving in and out of traffic with no care for other road users and paid the penalty and another one bites the dust."

(The blog has since been deleted, but a screenshot of a later version of it is here.)

The blog posting is dated February 20, the day after Claire Hitier-Abadie died after being hit by a tipper truck at Victoria.

Police are appealing for witnesses to that crash. I hope James Nash has come forward with his account.

James Nash initially denied he had been the person in the video, but now seems to be admitting it.

As he has deleted all the content of his blog, discussion has moved to a post on his Google Plus page.

He denies saying that cyclists deserve to die, despite it being clearly audible in leveret day's video of Nash telling her his thoughts on cycling, and then claims the video was "taken out of context".

He says he was struck by leveret day as she mounted the kerb and then received "a torrent of abuse" from her.

He wrote: "What happened was thast I was walking along Cromwell Road the other day about to cross over to the other side of the street when, all of a sudden I was struck by a cyclist mounting the pavement as I was about to step off and cross the road. My thirst thoughts was to enquire regarding the cyclist's well-being when all of a sudden I was receiving a torrent of abuse from the said individual."

Leveret day responded: "It's lucky that I've kept the video footage of the time prior to our 'conversation'. Will be posting it up soon. Interestingly it doesn't show me striking you at all!"

And indeed it doesn't. Here it is:

James Nash has been asked several times if he has given a witness statement regarding the death of Claire Hitier-Abadie, which he claimed to have witnessed. He has so far failed to respond.

In recognition of the fact that it has been claimed James Nash is mentally ill, comments on this story have been locked.