Spring is here. Well, the spring classics, I mean, starting this weekend with a double dose of the Omloop Het Nieuwsblad and Kurne-Brussels-Kuurne. This weekend marks the opening chapter of the Spring Classics, a series of races in and around Belgium and featuring many of the most iconic cobbled climbs and that we all know and love.

Tyres are king at the classics, and along with tyre pressure, are the most hotly debated topics for the team and tech geeks. Wide tyres have always dominated at the classics where cobbles are featured, and the widest tyres are reserved for the harshest cobbles of Paris-Roubaix. This pavé presents a challenge for the teams when it comes to setting up bikes. Even with all the data they’ve accumulated over the years of racing on the same roads, they still spend a lot of time reconnoitering the courses and, in particular the cobbled sections, like the fearsome Koppenberg, to make sure the bikes and equipment are up to scratch. For the riders too, it's good to familiarise themselves with the roads, especially if they've been away training in sunnier climes over the winter.

One of the main changes is the bike, wheels and tyres, and making changes so that it is better suited to the cobbles and generally rougher roads. The main concern is wider tyres, up to 25mm for races like Tour of Flanders and generally up to 27mm for Paris-Roubaix. The two races this weekend will probably be raced by most teams on up to 25mm tyres. 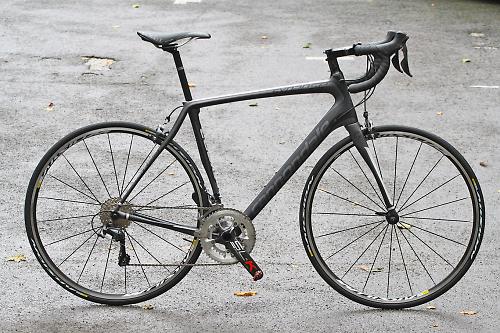 In years gone race bikes simply couldn't accomodate a tyre wider than 23mm, so we used to see cyclo-cross bikes quite regularly. Those days are largely a distant memory now though, as most of the manufacturers sponsoring a WorldTour team have brought out 'endurance' bikes, models based on race bikes with changes to provide more stability on those rougher roads from a longer wheelbase, more comfort and, most importantly, space for wider tyres.

The handy consequence of this race-led development is that the bikes are really well suited to the majority of British cyclists who don’t race, but want a fast performance bike, and understand the benefit of wider tyres. So we’re starting to see a lot more choice emerging, and road.cc has tested the likes of the CannondaleSynapse, Bianchi Infinito CV and Trek Domane and found them well suited to UK roads and cycling.

Another interesting change in recent years is the fact that many of the professional teams are now racing wider tyres than they used to for regular stage races. It's not unusual to see 24mm tyres where we used to see 22 and 23mm, and some teams are even on 25mm tyres.

There's growing momentum for wider tyres being regarded as faster than conventional narrow tyres. TOUR magazine conducted an interesting comparison test, where they took a selection of 23, 25 and 28mm tyres, and they concluded that the 28mm tyre was fastest with the lowest level of rolling resistance. The difference between the fastest and slowest tyres was as much a 9 watts. Now, that might not sound like much, but after 250km of racing, it could be the pivotal difference. We'll do our own test soon and let you know our findings.

Team Sky's Pinarello Dogma F8 was fitted with Veloflex Carbon 23.5mm tyres at the Tour de France in 2014, as we saw on Chris Froome's race bike from that race.

For the Omloop Het Nieuwsblad and Kurne-Brussels-Kuurne this weekend, Team Sky are riding the same Dogma F8, with the same Dura-Ace C50 wheels, but with 25mm FMB tubular tyres fitted. Previously we might have expected Team Sky to switch to the Dogma K (below) an endurance bike designed to accomodate wider tyres. They'll probably still use that bike, with 27mm tyres, for Paris-Roubaix, becuase the race has the toughest cobbles of any of the Classics, but it's an interesting development that they're now able to ride their regular race bike with wider tyres in Spring Classics. How times have changed. 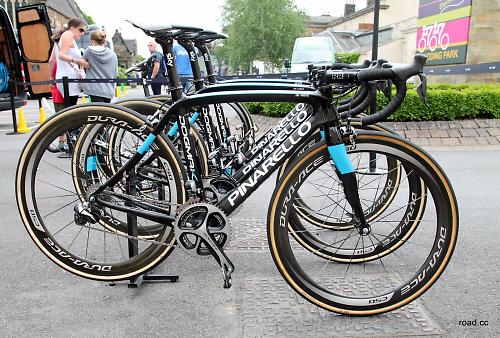 It's not just wide tyres that are important, tyre pressure is critical

Carbon frame developments and tyre width aside, perhaps the most critical technical preparation aspect the team invest time in during these reconnaissance rides, is tyre pressure. There’s little point inflating tyres to 120psi and trying to ride over cobbles, it just isn’t going to happen. Well, it is, but it won't be very pleasant, or fast. Tyres provide suspension, a tyre that is able to deform over bumps will be faster than a highly inflated tyre that isn't able to deform to absorb all the small bumps and ridges in the surface of the road. It's not unheard of for riders to go as low as 72psi. You certainly wouldn’t want to run a 23mm tyre at that low a pressure, but you can when the tyre is 27mm wide. But you won’t get a rider or mechanic to reveal exactly what pressure they’re running, it’s a card they keep very close to their chest  I asked the Team Sky mechanics at the start of Paris-Roubaix two years ago, and he retorted “No chance. That’s top secret.”

Choosing the tyre pressure is down to experience and is a balance and compromise between shock absorption on the cobbles and speed on the road sections, and not wanting to risk a puncture. Often the riders will inflate their own tyres rather than trust something so important to the team mechanic.

That’s why all the teams invest so much time in reconnoitring the roads before the races, a lot of it has to do with finding the right tyre pressure. Weather conditions will impact the final decision as well, lower pressures when it's wet and muddy to increase traction.