I've read about Chinese manufactured carbon wheels on other forums and this sparked interest into what these companies have to offer, can their wheels stand up to UK roads?  What's the quality like?  They generally get a good response from forum posters who have bought them, but are they as good as they seem on paper?  So I set about looking for a set to try out as a comparison with a traditional set of lightweight(ish) aluminium wheels, the type that most of us ride in the UK.  Carbon clincher’s were the choice, tubulars didn’t appeal as I’ve never owned a set but mostly because I want to do a direct comparison with a comparable alu set of wheels.

So where do you start?  First stop was eBay, and the choice there is vast.  Most seem priced around the £250-£350 mark, depending from whom you’re buying and what spec you choose.  This didn’t really appeal though, mainly because there was no clear link to any ‘manufacturer’ as such.  A bit more research required…  forums provided the most information on where to buy from with posters keen to provide information on their purchases and those companies that were reputable.  There were a couple of companies that kept cropping up, but the one that seemed to get the most mentions was Far Sports, based in Xiamen, China.

A look at their website sees that they offer carbon wheels of various types, along with frames, bars, hubs, saddles, spokes etc.  The wheels come in various depths and widths, the wider rims seen on established branded wheels have filtered into Far Sports’ range, with 23 and 25mm widths available.  My first step was to contact Far Sports and tell them what kind of riding I do, my weight, what the roads are like and what their advice would be.  The email response was within 24 hours and the recommendation came back that suitable wheels would be 24h front, 28h rear 38mm deep, 20.5mm wide carbon clinchers.  They would be built with a Bitex hub (which would appear to be the RAR12/RAF12 combo) and Sapim CX Ray spokes laced radial front, radial rear non drive side and 2x drive side.  This lacing seemed odd at first, but a couple of recent wheelsets reviewed on road.cc have this pattern (the Amp 50mm carbon clinchers and the Spada Stiletto’s)  I also asked for UD Matte (assumed unidirectional carbon) finish on the wheel section (other options were 3k and 12k weave), with Far Sports graphics.

The spec was duly agreed and the order made, with delivery from China to Scotland being predicted to be within two weeks.  Far Sports informed me that they would send me images before they were shipped and also provide a tracking reference, which would let me know where the wheels were at every point between the factory and my doorstep.  Being honest, I was skeptical whether the images would arrive and if the tracking would be of any use.  Sure enough though, the pre-packing images came through and shortly afterwards a tracking number was emailed.

I’ve not purchased many items from China before, and they’ve always been sent via a fairly slow untracked courier, so it was encouraging when after a day or two the wheels had arrived in the UK and were in the hands of UK customs.  This delay was short and the wheels were released for delivery a few hours later, off they went into Parcelforce’s tracking system (with the same tracking reference) and delivery was made the following day.  All in, it was 4 days from China to my door, not too shabby at all. 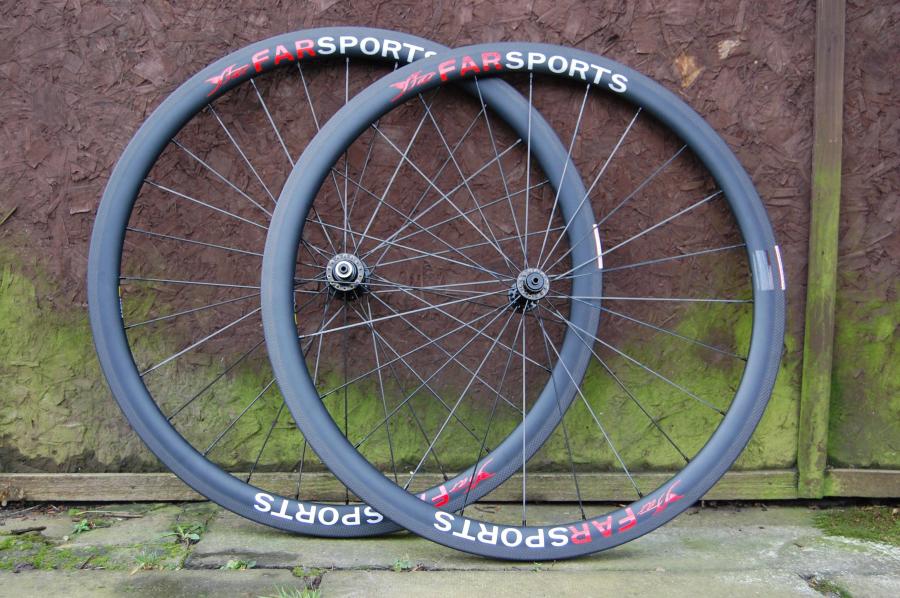 The wheels were well packaged in a reinforced wheel-specific box, the hubs were protected with plastic packers and everything was in bubblewrap bags.  The ‘extras’ in the box included two svelte (44g combined) skewers, two pairs of brake pads and an instruction leaflet.

The Far Sports graphics were a bit of a disappointment, they’re well made and neatly applied but the material itself is reflective red and white stickers, and the design isn’t really that appealing.  Branding is very much an area that Far Sports can look to improve.  The UD matte finish seems to be a painted matte black, which looks smart and feels robust.  The rims are a “U” shape, more akin with modern wheels made to handle cross-winds more effectively than the V-shaped rims of the past.  The Sapim CX-Ray J-bend spokes all have a brass washer at the hub end (where laced radially) and there’s also a small Sapim sticker on the inside of the rim.

The wheels weighed in on my own (not road.cc’s!) scales of truth (ok, the digital kitchen scales) 598g front and 754g rear, giving a combined weight of 1,352g.  This is a bare weight and doesn’t include rim tape or skewers… speaking of which, there were a few things I needed to buy.

If you’re going to swap new wheels about a lot, you need the sundries… new tyres, a cassette, tubes (these needed 60mm length valves) and in this case, rim tape.  The bits were duly procured and fitted to the wheels.  It’s quite an extra expense, so bear that in mind if you’re making a similar purchase.

So that’s where I am with these wheels at the moment.  They’ve not been ridden or fitted to the bike yet, I’m still rolling on my winter aluminium bike and don’t envisage riding the wheels until spring starts to blush, and the temperature goes up.  Call me old fashioned, but you don’t ride carbon hoops in winter!  This year, I’ll be blogging quarterly on how I’m getting on with these wheels, how they’re bearing up on Scotland’s roads and what the differences/similarities are between these and my usual aluminium Pro-Lite Bracciano wheels.  I’ll check back in April once I’ve put some miles on them, until then, it’s still winter miles for me!