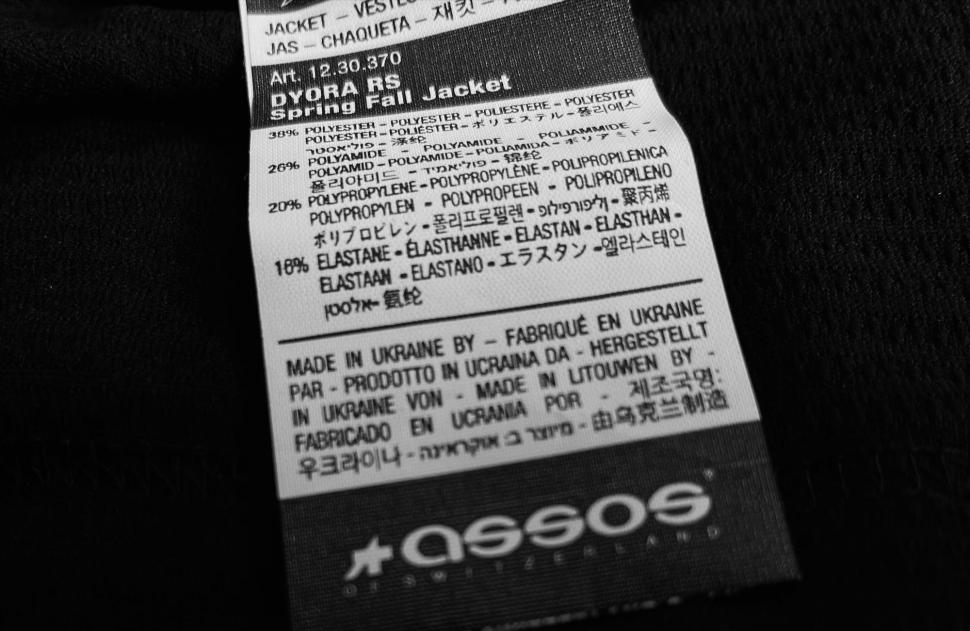 With some major brands relying on production from Ukrainian factories, the war is likely to lead to supply problems later in the year
by road.cc Tech

The human consequences of the Russian invasion of Ukraine are clearly devastating, the economic effects are huge, and there’s likely to be a commercial impact on the cycling market, the war-torn country producing a significant amount of technical clothing for some major brands.

With the Russian invasion now nearly into its third month, western consumers are being made aware of the many things Ukraine produces that they were only dimly aware of before the conflict began. Wheat, sunflower oil, car parts and IT, are some of the things to grab headlines, but crucially for the cycling industry, Ukraine is also an important hub of the world garment trade and in particular the production of sportswear.

While the economic dislocation caused by the war pales in comparison to the suffering of the Ukrainian people themselves, it is nevertheless real for the companies affected and those that work for them. As a cycling website, we're focusing here on the probability that the conflict will lead to kit supply issues for some brands later this year.

Well-known cycle clothing companies have, perhaps understandably been reluctant to talk to us on the record about this subject, not wishing to publicise that production takes place elsewhere or that interruptions to supply are possible. However, industry insiders tell us that large numbers of companies are likely to be exposed to events in Ukraine – a situation that extends into many industries other than cycling, of course.

Clothing from Swiss brand Assos that arrived for review on road.cc recently had ‘Made in Ukraine’ labels inside, although Assos' Dalany Watkins said, "The Ukraine crisis has had minimal impact on our supply chain. One of our premium production partners had a small hand sewing operation in Ukraine, but was able to reallocate production to its main production facility in Lithuania."

Belgium's Bioracer was beginning production in Ukraine when Russia invaded.

"We have employed a fair group of Ukrainian people, mainly women, in our factory in the Czech Republic for many years," said Bioracer's CEO Danny Segers. "With respect to the growth of our business, we always try to find new spots to start our new production facilities as a partnership approach, and we try to bring them up to speed as soon as possible. Based on the contacts of our Ukrainian colleagues we started to collaborate with a small set-up in Lviv [in western Ukraine].

"Our initial reaction [to the invasion] was to lower the supply of goods to this facility. After the first wave, we continued working with them (as long as they felt safe to do so) in order to provide them with income and also to provide them aid goods.

"Next we proposed to our Ukrainian colleagues to help with shelter for refugees. At the moment we are employing 12 new people in our factory in the Czech Republic and bringing them into our team.

"The effects for our business, like for practically all businesses, are the impact on raw material costs and wage inflation – costs which affect our business significantly. Together with a delayed supply chain, this has a negative effect on lead times in production but we will manage it and try to keep it under control."

Clothing companies can try to shift production that was planned for Ukraine to other countries, but finding factories elsewhere with spare capacity – especially at short notice – is a challenge. It’s even more complicated if the fabrics are already in Ukraine.

Plus, companies spend a lot of time developing working relationships with particular factories that they know can produce to the quality required. It’s not as simple as just finding a factory that has enough free time in its schedule.

As well as managing production schedules, brands need to organise fabric supply to the factories they are using. Lower tech fabrics are relatively easy to source, but high tech fabrics sometimes have lead times of 18-24 months.

When will the effects be felt by consumers? It depends on the timescales to which the individual factories are working. Some factories would still be producing clothing for spring/summer 2022 collections at the moment with volume production for autumn/winter 2022 scheduled to ramp up from around July, but this varies from one facility to the next.

As for the brands, standard commercial insurance policies exclude war, whether for loss of property or consequential loss, so they’re likely to find themselves out of pocket on unmade and/or undelivered product. Political risks insurance would cover the effects of war but for Ukraine, since 2014 – when Russia invaded and annexed the Crimean Peninsula – that would be prohibitively expensive, if available at all.