Check out this brand new gravel adventure bike before you head off to bed.
by Liam Cahill

Norwegian bike brand Fara has redesigned its F/GR gravel bike, giving it dropped seat stays, a dropped drive-side chainstay that bumps tyre clearance up from 45mm to 50mm and a front end that takes the cables through the headtube for a cleaner look and better able to fit bar bags.

Yes, I know what you're thinking. It is indeed only 7pm but to be honest, with the cold and dark evenings we've now got, you might as well be in bed. And Fara chose to release the bike at 7pm. So here we are... Anyway, Fara says that it doesn’t “want to leave a single bit of the beautiful Scandinavian landscape unridden” and so they’ve gone and made a bike that they reckon is capable of going us about anywhere and carrying a fair amount of kit too.

The focus here is undoubtedly on adventure riding with the number of frame mounts being a visual indicator of this but also Fara stating outright that they designed this bike for accessing the wilderness rather than pelting along in competition. 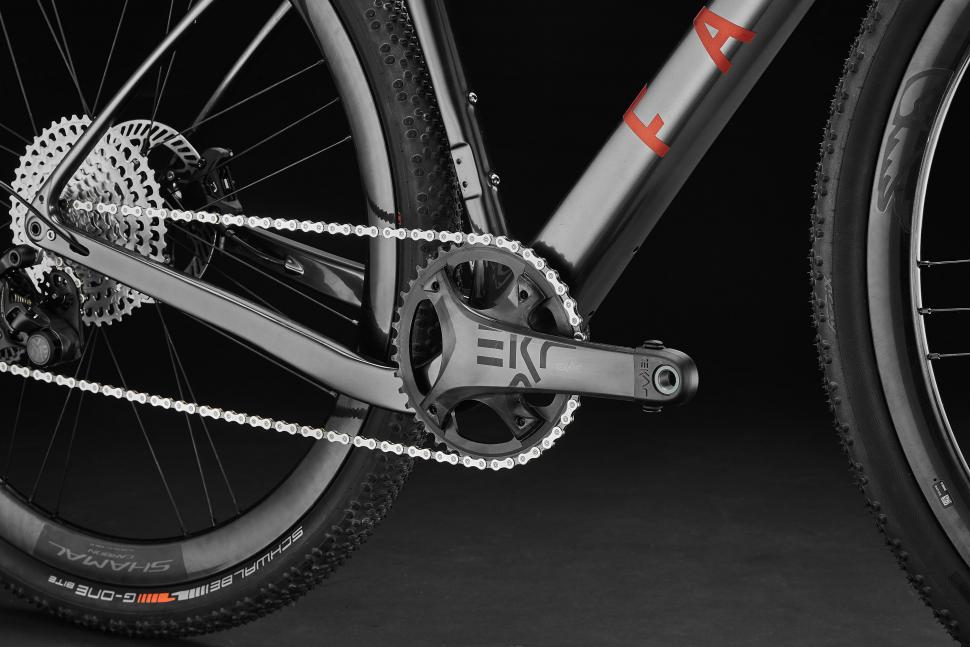 The two most noticeable changes from the old F/Gravel-R are the dropped drive-side chainstay and the integrated front end. But look closer and there are some more subtle changes that take this away from the race bike that the F/Gravel-R was. That is a lot of potential carrying capacity from the oddly named IBS (Integrated Bikepacking System) which Fara includes in some form or other on even its road models. If the above isn’t enough capacity then there is also the in-frame ‘Stash Hatch’ which can be loaded with spares and tools so you don’t forget them.

Turning to the chainstays, Fara has done what many brands have resorted to in the search for wider clearance and dropped the drive-side chainstay. This has opened up space so that the F/GR fits 50mm tyres, though Fara reckons that you’re best off with a set of 43s for fast and fun long-distance gravel trips or even commuting duties. At the front end, you’ll find that the brake and gear cables run along the underside of the stem before disappearing into the headtube. That integration is thanks to a Token S-Box system and is primarily about making it easier to fit a bar bag. It helps that it also looks great, but it will make replacing cables a bit more of a job.

The frame is claimed to weigh in at 1050g for a medium, uses a round 27.2mm seatpost, has a T47 bottom bracket and is set up to run a direct-mount 160mm front brake to save you using an adaptor. Away from the marketing claims, one thing we can say for certain is that this is a very tasty build that uses Campagnolo’s Ekar 13-speed groupset and Shamal carbon disc wheels. The finishing kit comes from Ritchey and if you don’t like that selection you can build yours differently. Speaking of which, Fara operates on a direct-to-customer model so you’ll be ordering from the Fara website. The bike is then assembled in Oslo before being sent out so while the starting price is €3,500 with a Shimano GRX 810 groupset, you will have to factor in VAT.

The bike is available to order now, though depending on the parts you pick, you could run into some delays getting your new bike.

1
RideLondon: tacks strewn on route and angry petition gains traction ahead of sportive's Essex debut
2
“If the weapon had been a knife or baseball bat the driver might be looking at a prison sentence”: anger over hit-and-run driver's assault on cyclist
3
Moriah Wilson murder: Colin Strickland ‘in hiding’ until suspect Kaitlin Armstrong found
4
Man who killed teen cyclist while driving at three times the speed limit in fog on wrong side of road faces jail
5
Near Miss of the Day 773: Close pass driver sent warning – then “brags they got away with it”
6
“I wholeheartedly disagree with his approach” – YouTube driving instructor Ashley Neal on CyclingMikey
7
Key Bristol cycle lane to be scrapped – because council claims it causes flooding
8
Moriah Wilson murder: Suspect Kaitlin Armstrong ‘fled to New York’