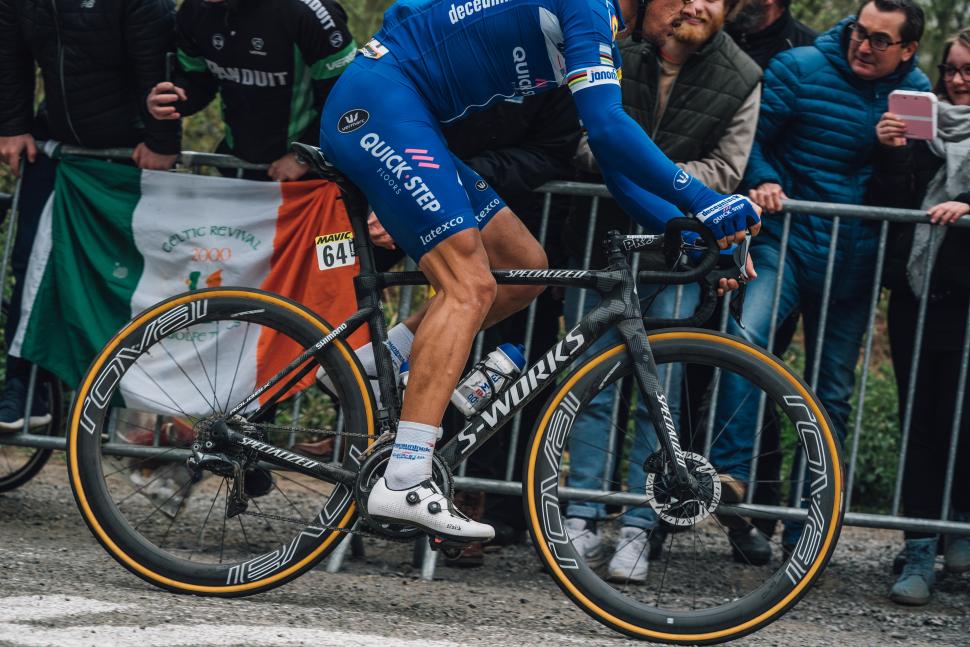 You could not only hear the cheers rippling around the iconic Roubaix Velodrome on Sunday, but also over the pond in Morgan Hill as Philippe Gilbert provided the dream debut for Specialized’s brand new Roubaix bike, launched just a few days before Paris-Roubaix.

We wrote an article on Peter Sagan’s brand new Specialized Roubaix last week since he was one of the hot favourites despite not displaying the best form this spring many expected him to repeat his victory of last year. Only it wasn’t to be. An exciting and dramatic race full of crashes, punctures and tactics resulted in a great edition of the Hell of the North with a popular victory for the former world champion.

Obviously it was the fact he had good legs and covered the move by Katusha’s Nils Politt, and his rivals faded in the last miles, that led to his victory. But his bike might have played a part too. He was riding the brand new Specialized Roubaix 2020 withe new-and-improved Future Shock 2.0, lighter and aerodynamic frame, wider tyre clearance and disc brakes. - Specialized Roubaix 2020 First Look: Everything you need to know about the new endurance bike

Like the rest of the Deceuninck-Quick Step riders, Gilbert was riding one of the three special pro fit geometry Roubaixs which have a stack and reach matching the Tarmac - the regular Roubaix is a bit taller and shorter to better suit us mere mortals. Key to the bike is the 20mm of suspension the Future-Shock 2.0 provides, which can now be locked out via a turn dial knob on the top of the stem. There’s also hydraulic rebound and compression damping for a smoother more controlled action over the repeated hits of the cobbles. There’s also the new Pave seatpost which is clamped in a wide opening seat tube with a 65mm dropped internal seat clamp to allow the saddle to move back and forth to try and match the bump-absorbing action of the Future Shock 2.0. Those features are wrapped up in a frame that is lighter than the Venge, a claimed 900g, and for the first time is aerodynamic.

Despite a strong headwind, the racing was fast and furious and aero matters, so the fact the new Roubaix is claimed to be not only more aero than the old Roubaix but even more aero than the current SL6 can’t have harmed Gilbert’s progress in the race at all. In a race of attrition it’s all about saving energy and reducing fatigue so you hopefully feel fresher in the final kilometres to cover attacks.

There are a few special modifications for this race as we outlined in this feature - 11 ways the pros prepare their bikes for Paris-Roubaix. Firstly, the team have a prototype Future Shock 2.0 dial with more pronounced edges and grip tape on the tape, so they can rotate it with their palm if they need. There’s also a blob of white paint so the rider can be easily reminded if the Future Shock 2.0 is open or firm. Some on social media have been suggesting that Gilbert didn’t have a functioning Future Shock and that it was locked out. That’s not the case, you could clearly see Gilbert operating the dial before and after cobbled sectors and the riding photo on this page clearly shows the rubber boot below the stem is slightly compressed, which it wouldn’t be if it were completely locked out.

Shunning Sagan’s decision to go retro with a mechanical groupset, Gilbert used a regular Shimano Dura-Ace Di2 groupset which served him well where others had issues. Gilbert had small Di2 sprint shifter buttons inside the hoods, for changing gears in the drops. Like the rest of the peloton, he also upsized the small chainring to something in the region of 44 to 48, up from the normal 39t (we’ll confirm what size once we know for sure).

Monitoring and recording his power, speed and other vital stats during the race was a Shimano Dura-Ace power meter. He was also using Shimano SPD-SL pedals.

All Specialized sponsored riders were rolling on Roval CLX50 wheels with a choice of 28 or 30mm wide Specialized S-Works Turbo tubular tyres, the decision over width down each rider. Gilbert opted not for the widest, instead choosing 28mm tyres, as denoted by stickers on the rims presumably to make the life of the mechanic a little easier.

Showing how much luck plays a part in this race, none of the QuickStep  riders suffered a puncture during the 257km race which is quite remarkable. While Sagan opted for a special Roubaix with disc brakes to win Paris-Roubaix last year, there was no special bike for either the QuickStep or Bora teams this year, with all riders on disc brakes. Disc brakes were a much more common sight this year, second placed Nils Politt was also on disc brakes, his Canyon specced with the brand new SRAM Red eTap AXS groupset.

Race notes were tape to the 125mm Pro Vibe aluminium stem and an aluminium Pro handlebar was double wrapped with bar tape right up to the stem. A K-Edge out-front mount secured his Garmin computer in place. His handlebar is a traditional type, with a deep drop and flat lower part that provides a very aggressive and aero position.

- Specialized Roubaix First Ride - smooth and fast on the cobbles

One very intriguing detail which we’ve never seen before is the taping of an Allen key behind the seatpost. It’s there for the rider to remove the thru-axles holding the wheels into the frame/fork while they wait for the team car/neutral service to arrive with a spare wheel. Clever solution it may be, but maybe it would have been more sensible to revert to thru-axles with levers for this race because that would surely be easier than fumbling with a tool taped to the post? 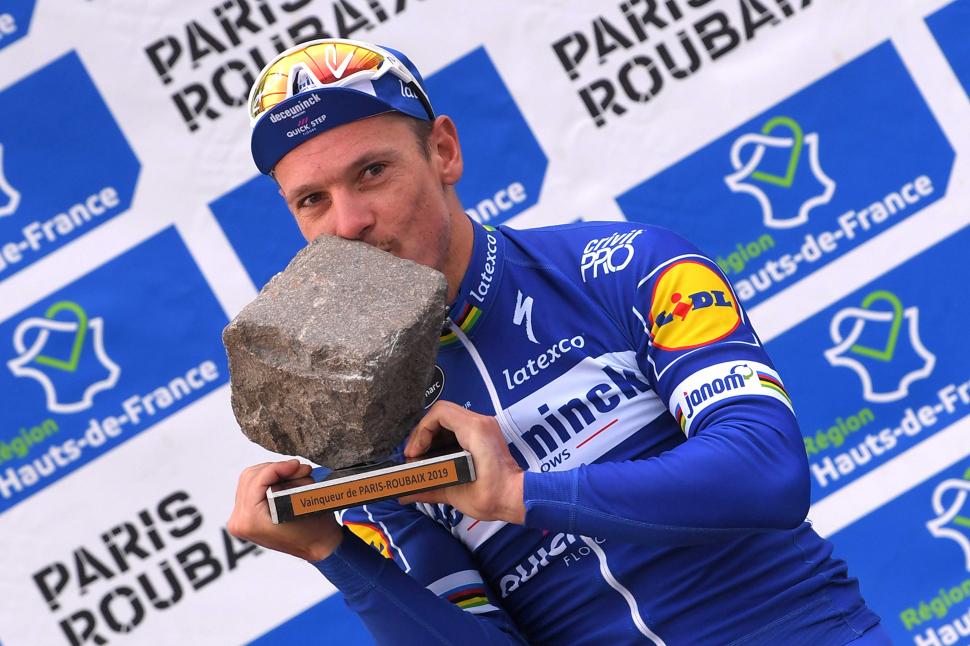 Probably the one bit of kit that is free from sponsor requirements is the choice of shoes. Specialized has managed to get most of its athletes using its S-Works 7 shoes, but Gilbert prefers the comfort/money from the Fizik shoes.