The X-Lite has been a familiar fixture in Rose’s range for a few years now but for 2018 it has been completely overhauled and, in the company’s words, provides “the golden ratio of aerodynamics, lightweight design, stiffness and comfort.”

Rose is keen to remind us in its press release that it has been around for 110 years, and it has put all this experience and its current expertise into developing an all-new lightweight aero optimised carbon frame available with disc brakes or rim brakes, weighing a claimed 790g and 760g respectively in its lightest incarnation for a size 55cm frame. 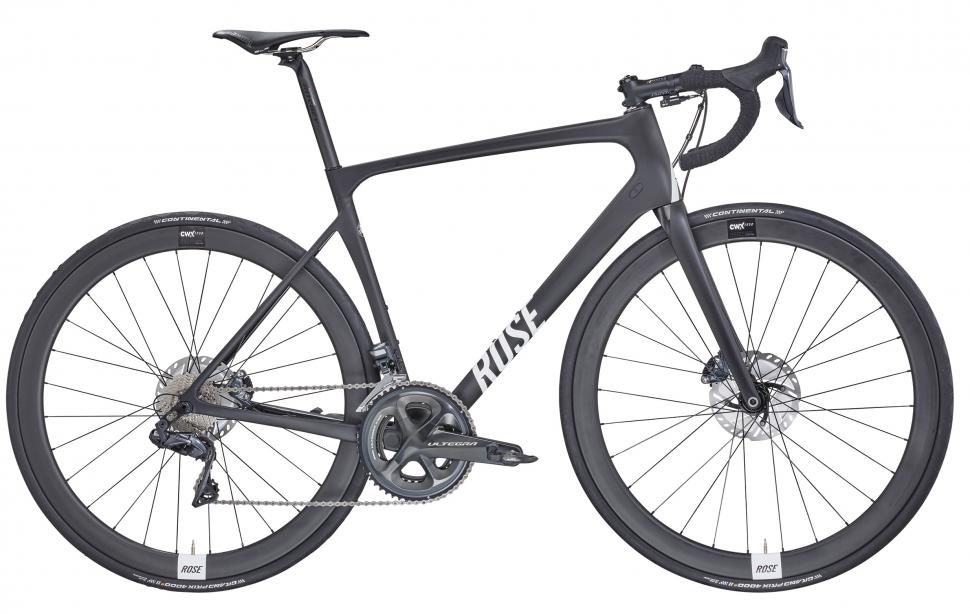 This is a bike that Rose hopes will compete with flagship race bikes from other top brands, the likes of the Specialized Tarmac, Trek Emonda, BMC TeamMachine and so on. The frame weight certainly puts it in contention, and it’s equipped with all features we’d expect to see on a bike with such lofty ambitions.

Aerodynamics isn’t just confined to time trial and aero road bikes these days, as the new Tarmac SL6 has shown, even lightweight all-round bikes are being put through aero testing in the latest frontier of advanced bike design in the pursuit of ever more marginal gains.

So the new X-Lite then has an aero optimised frame and fork. The main tube profiles of the frame and the fork blades are shaped using the common Kamm Tail profile, a teardrop shape with a chopped tai. Reducing the frontal surface area is also key to reducing drag, and so the new X-Lite has a narrow headtube. The seatstays are slim and the cables are internally routed, and there’ll be a new handlebar and stem with further internal routing that is in development and coming soon. The seat clamp is integrated into the top tube, as is very common with top-end frames, and not only helps with aerodynamics but provides more seatpost extension for a bit of added comfort.

The result of the changes in the company’s own wind tunnel testing is a claimed 11 watt saving over the previous X-Lite Team.

Comfort has been a consideration as well, including a sloping geometry to provide lots of extended seatpost which along with the skinny seatstays provides extra comfort at the saddle.

And of course, there’s the clearance for wider tyres, as is so common on new road bikes at the moment. Cyclists are just loving the wide tyres, and the bike industry is responding by increasing clearance on bikes that years ago would only have taken a 23 or 25 at a squeeze.

There are lots of other very modern details, such as the seatclamp which resides inside the top tube to produce clean lines and allow for more extended seatpost, helping to produce more deflection at the saddle. The compact rear triangle is a design we’re seeing being adopted by a lot of bike brands, so whether their research and development is all leading them down the same path, or there’s some imitation going on, we’re not sure.

Size-specific carbon fibre layup and tube profiles is a growing focus for a lot of bike brands, and Rose has used this approach to ensure the new X-Lite offers optimal stiffness for each of the six frame sizes.

“The special carbon layering creates identical, optimum stiffness values for crankset and steering head in all six sizes – for perfect handling and ultimate speed for every rider,” says Rose.

There are two variants of the new X-Lite, the X-Lite 6 using a higher grade of T40/60 carbon and weighing as little as 760g claimed, while the X-Lite 4 uses a mix of T30/40 carbon with a small weight penalty, 860g and 890g for the rim and disc brake versions respectively.

There’s a wide range of models to choose from, starting at £1,993.77 for the X-Lite 4 with rim brakes and a Shimano Ultegra mechanical groupset. The rest of the specification includes Ritchey finishing kit and DT Swiss P1750 wheels with Continental GP4000 S II 25mm tyres. Despite being the entry-level model, the claimed weight of 6.8kg puts it right on the UCI’s weight limit. The X-Lite 4 with disc brakes and a SRAM Force groupset and hydraulic disc brakes is yours for £2,427.38, with DT Swiss P1750 Spline Disc wheels and Conti tyres. It weighs a claimed 7.2kg.

Moving up to the X-Lite 6, an Ultegra Di2 model with Mavic R-SYS SLR wheels and matching Mavic tyres with a Ritchey Superlogic WCS finishing kit is yours for £3,728.23. Feeling flush? You can upgrade to Zipp 303 NSW Carbon wheels for an extra £2,071.

If you prefer Shimano, the X-Lite 6 Dura-Ace Di2 costs £4,855.64 and weighs a claimed 6.2kg, with Mavic R-Sys SLR wheels, though for an extra £2,270 you can upgrade to Zipp’s brand new 454 NSW carbon wheels. There’s the option, and this is the first time we’ve seen this so far, of speccing Shimano’s brand new power meter.

The Rose website does allow a wide range of customisation, so you can build your own bike to suit your budget or wishes. You can do simple things like changing the bar tape colour, choosing the number of headset spacers or specifying the cassette ratio, to changing the handlebars or saddle if you want.

The last thing to mention is the all-new graphics. Rose bikes have divided opinion aesthetically in the past, but in a clear desire to be more appealing to a larger audience there’s a brand new logo and a smart new way of applying it to the bike. I like the understated approach, I think it works well.

That’s a first look at the new bike, we’ve got a bike coming into the office for review very soon so watch out for that.