Shimano has revealed more details of its top-level Dura-Ace 9150 Di2 electronic groupset, and road.cc has had the chance to use it for the first time.

Shimano has brought me out to Calpe, Spain, where several of its pro teams are currently running training camps, to check out the new products and use it for the first time. I’ve been on two (very wet and cold) rides using Dura-Ace 9150 today, one of an hour and the other of two hours, so these are very much first impressions. 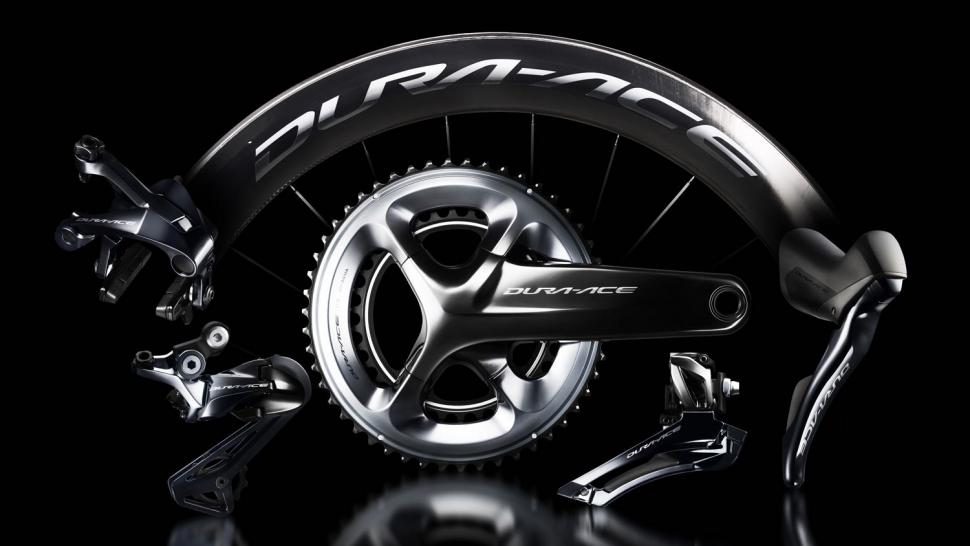 There are several noticeable ways in which Dura-Ace 9150 Di2 performs differently from previous versions.

First, shifts feel slightly different. There’s more of a definite click when you press the buttons. You had a click before, but now it’s bigger. Di2 still isn’t as clicky as Campagnolo EPS but you definitely get a little more feedback than before, especially when you’re in full finger gloves like I was today (two pairs! I know, your heart bleeds for me). While we’re talking about the shifters, they have a button at the front of the hood, under the hood cover. Buttons have been there since 2012 although Shimano has changed the design now, moved their position, and made them more clicky. They're altogether easier to use. 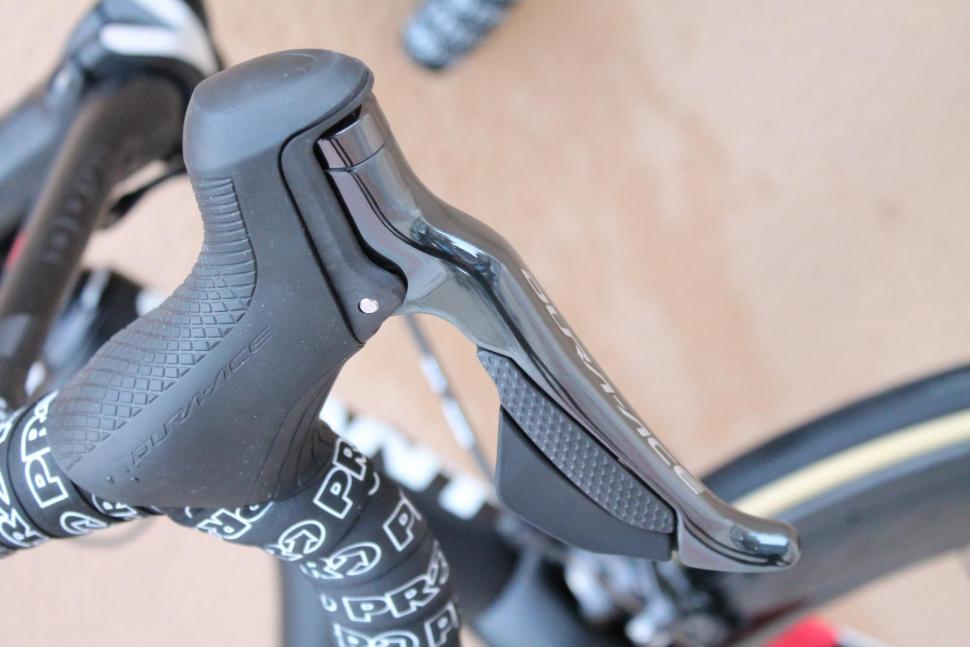 Alternatively, you can set up your system so that the buttons change the display on a Garmin Edge bike computer. Each of these buttons can have two different functions, one when you press it and the other when you press and hold it. Shimano invites third party manufacturers to come up with other uses for the buttons, which will send commands via a private ANT+ protocol. There’s no reason why other bike computer manufacturers couldn’t join Garmin in making use of the facility, or other brands coming up with a totally new way of using it.

The Junction A unit that was previously a cuboid shape has been completely redesigned. Some brands, including Trek and Look, hid the previous version Junction A away inside the frame but most positioned it underneath the stem.

The new one can be plugged into the end of your handlebar, which is neat and more aerodynamically efficient.

There's another version of the Junction A unit that manufacturers can fit into a recessed frame.

This new Junction A unit allows you to switch between shift modes: manual, semi-Synchro Shift or full Synchro Shift.

If you go to full Synchro Shift, you simply press a button for a lower gear and the Di2 system will move you to the next lowest gear available even if that means shifting chainrings. So one push of a button and the system could move you from the large chainring to the small chainring, and from a large sprocket to a smaller sprocket. Geddit? 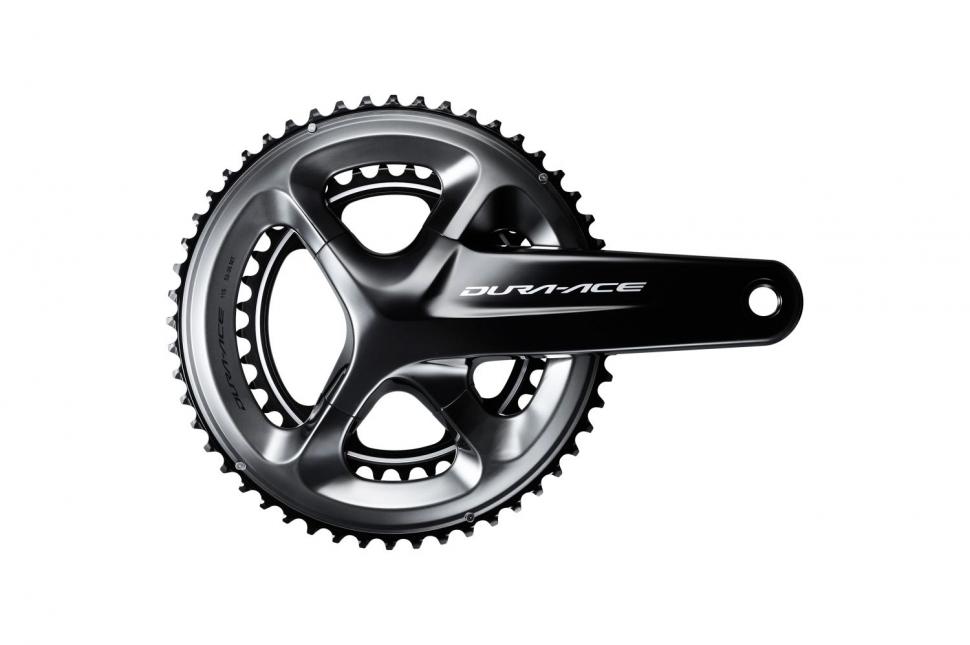 If you were using the small chainring and one of the small sprockets and pressed the button to move to a higher gear, the system might move you automatically to the large chainring and a larger sprocket. Put simply, the system will put you into the next ratio up, and if that means moving both derailleurs, it’ll do that.

Synchro Shift is fully customisable. You can go into Shimano's user friendly app and decide what will happen when you press up or down from any chainring/sprocket combination.

This is technology that has come over to the road world from Shimano’s mountain biking groupsets. Why would you want to use Synchro Shift on the road? Well, it’s not designed to get rid of the need for a dedicated front mech shifter. It has really been introduced for time trial and triathlon where you can have just one bar end shifter on the left aero bar and another on the right. With Synchro Shift you just press either the up button or the down button regardless of the current position of the derailleurs and chain. However, if you want to use it on a standard road bike, it is an option. There is currently no warning beep to let you know when the front derailleur is going to move the chain from one chainring to the other, which would allow you to adjust the amount of pressure you’re putting on the pedals accordingly, although Garmin will bring in this feature via the bike computer, and any other computer brand that cares to can do the same.

The semi-Synchro Shift option might be of more interest to road bike users. With semi Synchro Shift, when you move the front derailleur the rear derailleur will automatically move the chain a certain number of sprockets at the same time.

So, say you’re moving from the small chainring to the large chainring. If you do nothing else, this will increase the size of the gear by a considerable margin, right? With semi-Synchro Shift enabled, the system will move the chain up the cassette to reduce that margin and keep your cadence more consistent.

Moving from the large chainring to the small chainring would usually reduce the size of the gear by a large chunk so Di2 will automatically move the chain down the cassette to reduce the jump.

If you’re an experienced bike rider you probably do this yourself a lot of the time without even thinking about it. I was riding with semi-Synchro Shift today and I kept forgetting about it, so I’d move the front derailleur and then immediately move the rear derailleur manually when I didn’t need to. That’s not a problem – you can override the system – but it defeats the object. A certain amount of re-education would be needed to establish new habits. I see it as being more useful to someone coming into the use of dual derailleurs for the first time.

Switching between manual, semi Synchro Shift and Synchro Shift is easy, you just double-click a button on the Junction A unit. You could just about do it while riding although the idea is that you do it while stationary. Chances are that you’ll stick with one mode forever.

Mapping the gears – deciding the specifics of how Synchro Shift and semi Synchro Shift work – is very simple via Shimano’s E-Tube Project software which you can run on a PC, iPad or a phone.

The one feature of Shimano Dura-Ace 9150 Di2 that I’ve not yet used is the power meter. I’ve seen it, been talked through it and know what it does, but I’ve yet to use it. I’ll write a separate story on that tomorrow when I’ve given it a go.