The Storck Fascenario.3 is a new road bike that combines a light weight with an exceptional level of bottom bracket stiffness and plenty of comfort.

We told you about the brand new Fascenario.3 on Wednesday. Now we’ve been the first media outlet (yes, media outlet!) in the whole wide world to ride the new bike (we’re very persuasive and experts at Chinese burns). We didn’t have the bike for ages; just an hour on the roads around the Eurobike show in Friedrichshafen. There are so few of these Fascenario.3s in existence that Storck couldn’t let us have it for any longer than that. 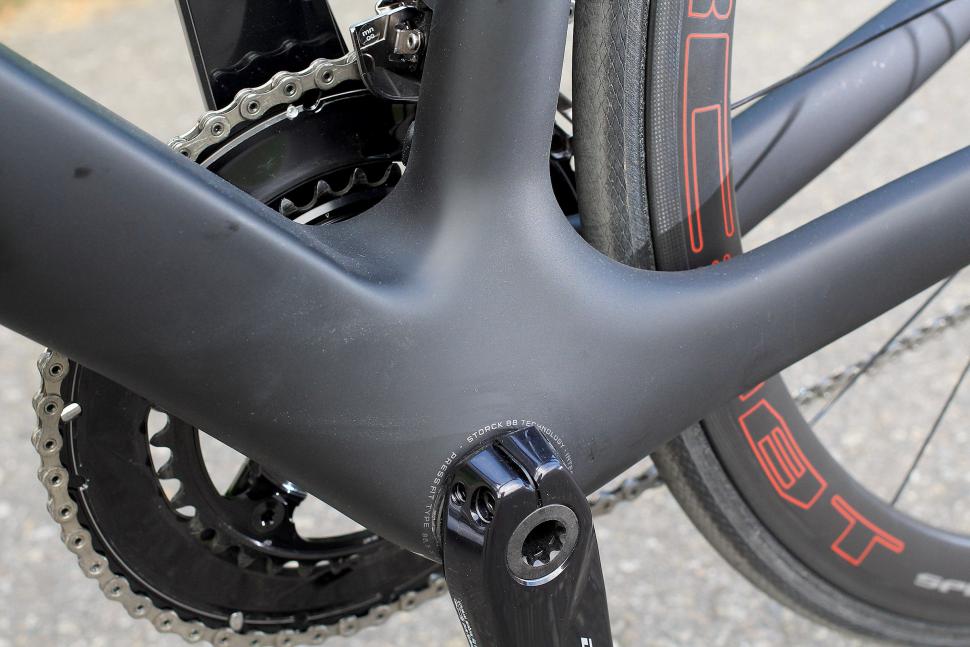 So what did I find out on my ride? First, the Fascenario.3 feels very, very stiff through the bottom bracket, and that’s despite a frame weight that’s just over 800g. Storck reckons that a bit of jiggery-pokery with the carbon will mean that frames actually come in at under 800g. The Fascenario.3 is one of those crazy-light bikes (we didn’t have the chance to get it on the scales. Sorry) that feels like it’ll snap as soon as you climb aboard never mind put some power through the pedals. 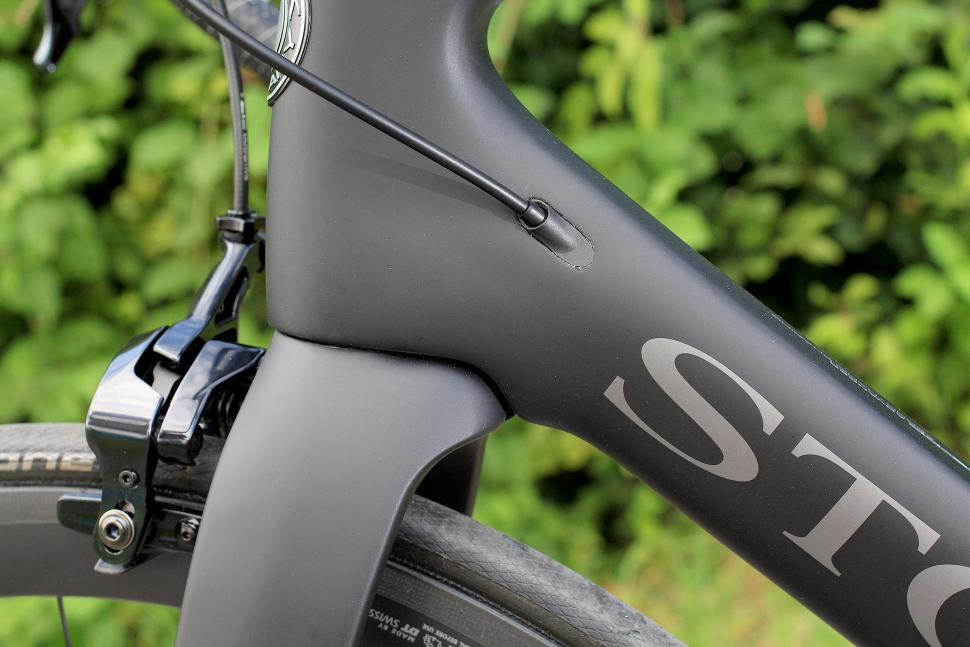 The truth is, though, that the amount of rigidity you get through the centre of the bike is nuts. You think the BB is going to sway about all over the place once you lay down your biggest power moves, but it just doesn’t budge. That’s the biggest attribute that you notice straightaway. 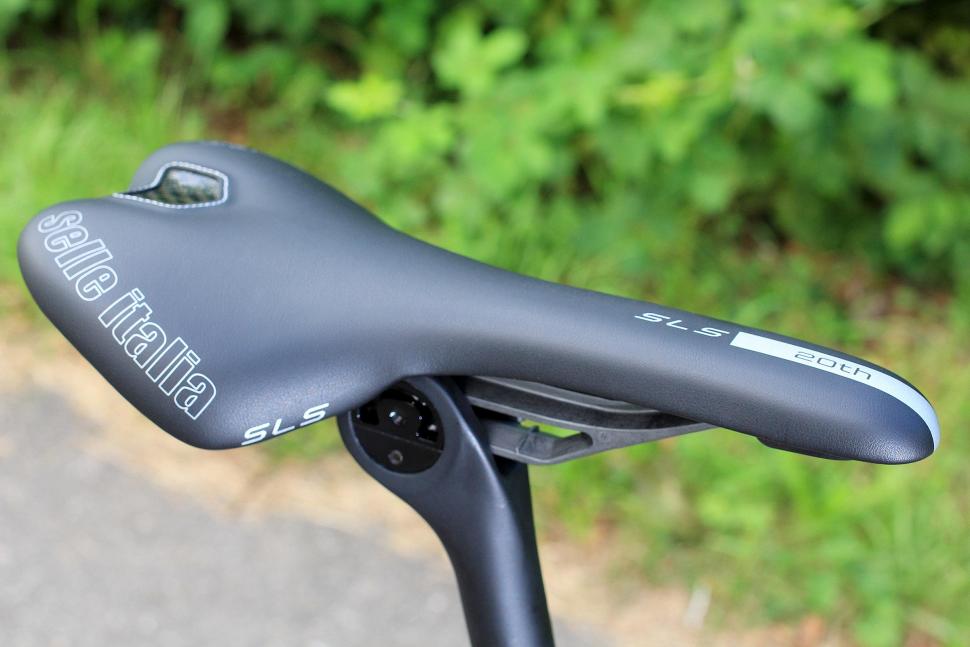 The other thing that’s immediately apparent is the amount of up/down movement you get, particularly at the saddle. The term ‘vertical compliance’ is a cycling cliché that has effectively lost its credibility through overuse, but that would be one way to describe what’s going on here! I don’t like to wheel out that phrase because it gets used to describe pretty much every bike in existence, even those that aren’t particularly comfortable, but vertical compliance is a real-life actual thing, it just needs rebranding to restore its credibility! Anyway, the point is that, tired old cliché or not, the Fascenario.3 has plenty of it. 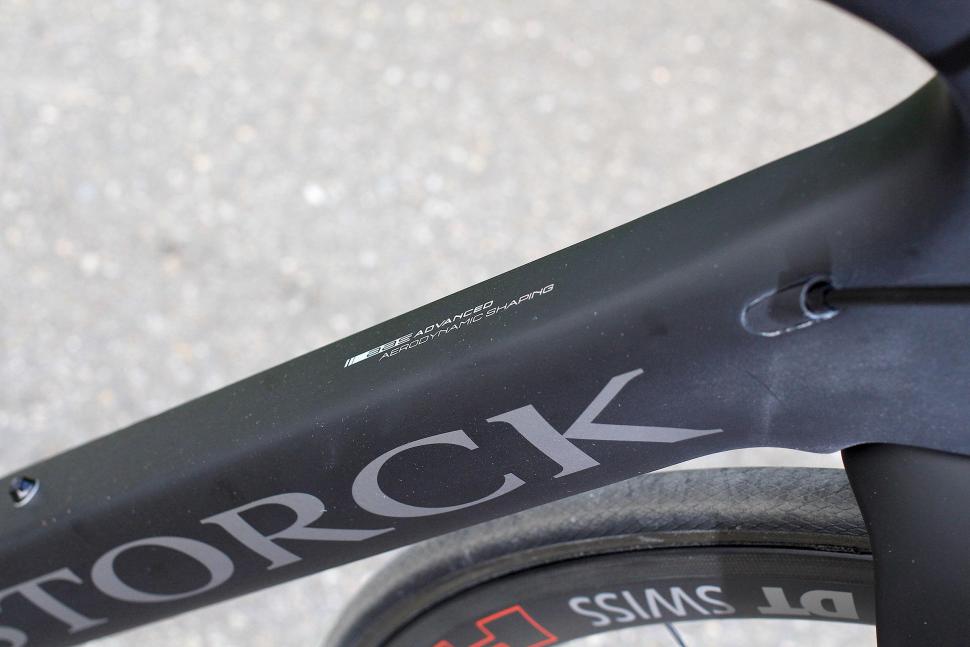 If you grab a bike and push down on the saddle, there’s always a small amount of downward movement, if only because the tyres compress slightly, right? With the Fascenario.3, there’s a lot of that movement. You can see the F.3 seatpost flexing. Get out on the road and that translates into comfort. 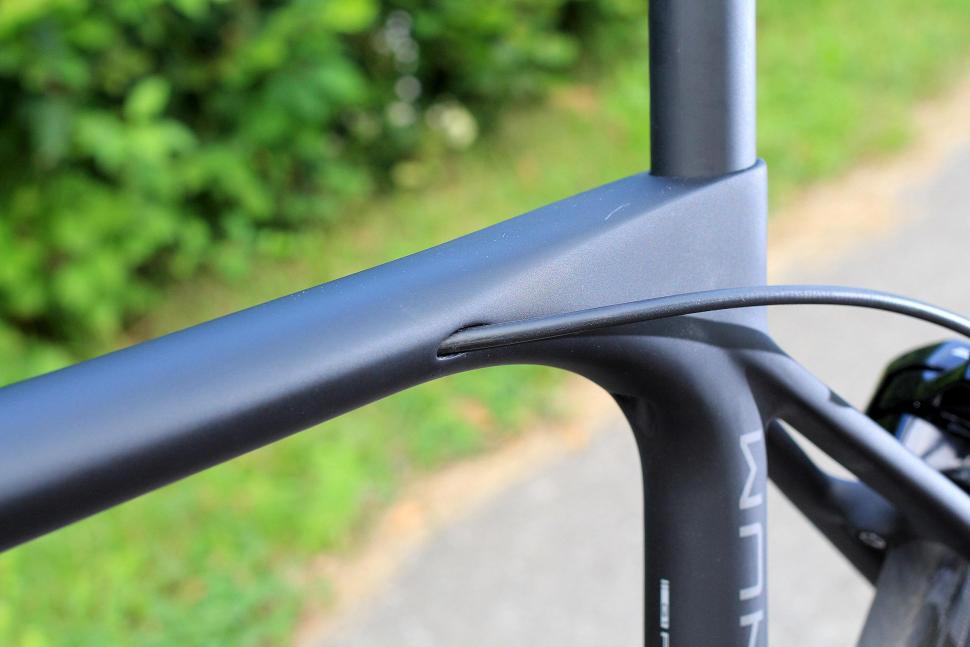 The seatpost has a D-shaped profile with the flat face at the rear. Storck calls this Flat Section Technology, the idea being to allow a degree of movement in that back/down direction. This might sound like some hocus pocus nonsense designed to fool the gullible, but it works. 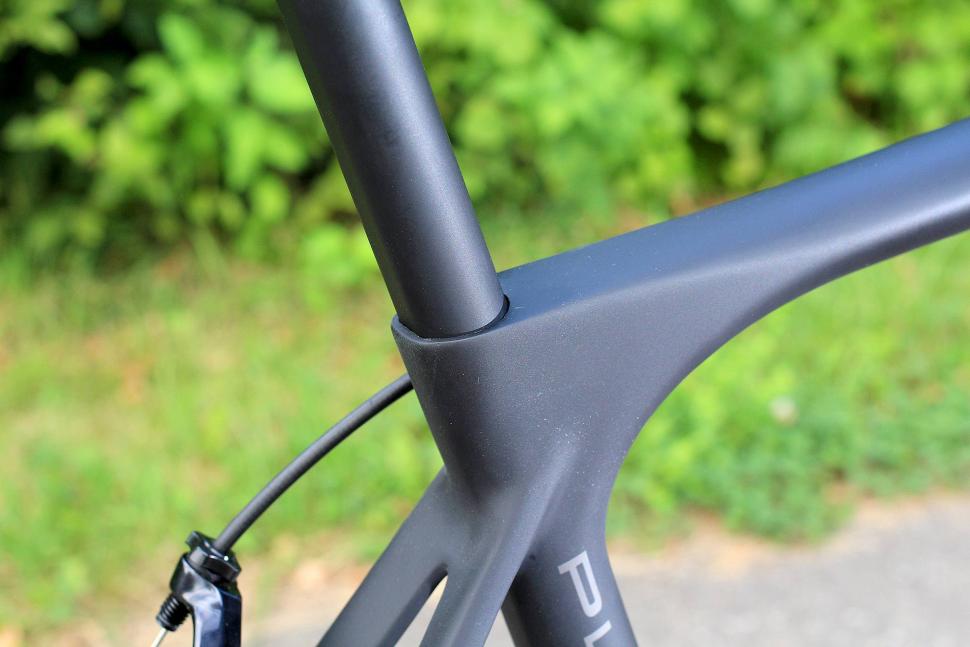 As I mentioned, my ride wasn’t a long one so I can’t say for sure how the Fascenario.3 would feel after a full day, but I went out of my way to ride over every bit of rough road I could find and that saddle movement was apparent. There’s no detectable flex as you pedal, but the seatpost definitely works to soak up road irregularities. 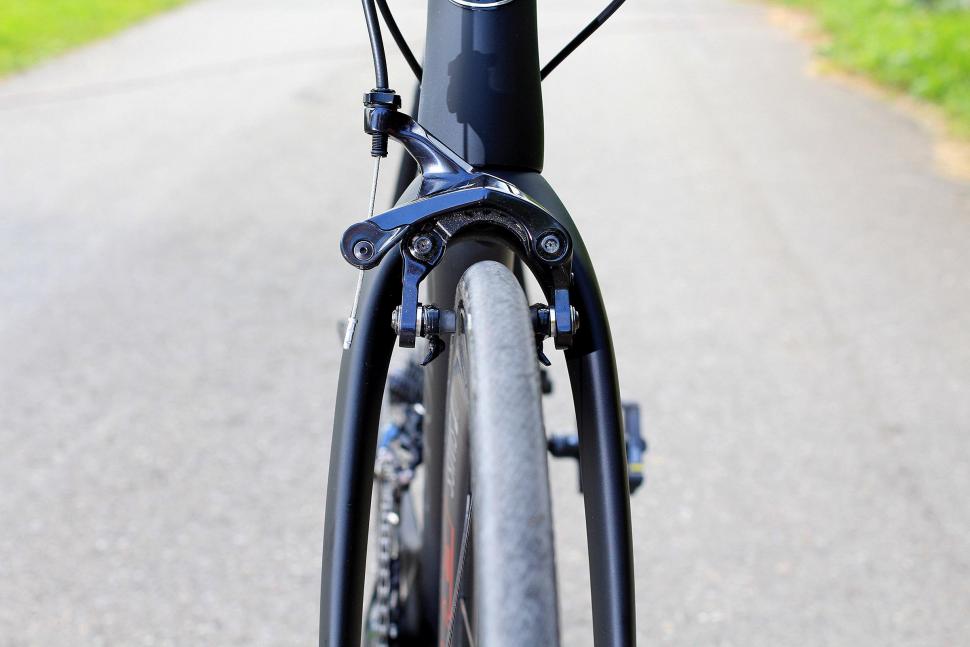 The Fascenario.3 feels like a fast bike too. At least, acceleration is lightning quick. Whether it lives up to Storck’s aero claims, I couldn’t tell you for sure. The tube profiles are designed to minimise drag and the fork legs arc away from the front wheel to an extraordinary degree, the idea being to allow air to pass cleanly through the gap to avoid turbulence. I just can’t say whether these features have the desired effect but the theory sounds good and Storck says that the wind tunnel data is impressive – a claim that won’t surprise you. 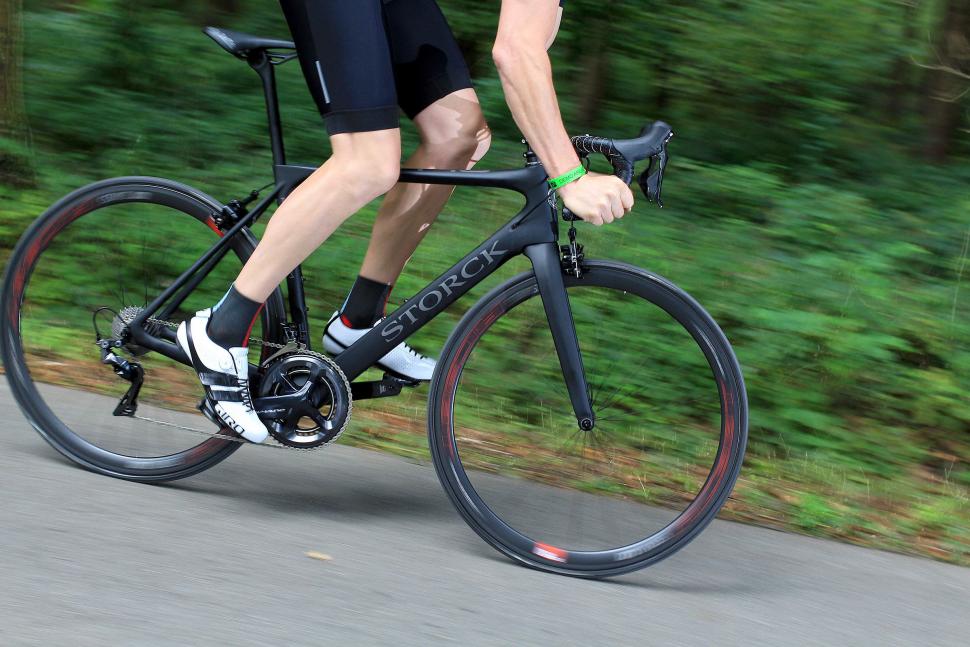 Markus Storck reckons that he has designed the Fascenario.3 to be the best road bike out there, balancing aerodynamic efficiency, comfort, stiffness, and ergonomic performance. A single hourlong ride isn’t enough to confirm or deny that – and that’s before we get into a discussion of what attributes the ‘best’ road bike should exhibit – but I can tell you for certain that this bike puts in a very strong performance. I’m close to using the word ‘spectacular’! Go on then, it’s spectacular on first impressions. We’re trying to persuade Storck to let us have one in for a full test on road.cc, so keep your eyes out for more from us over the coming weeks and months. 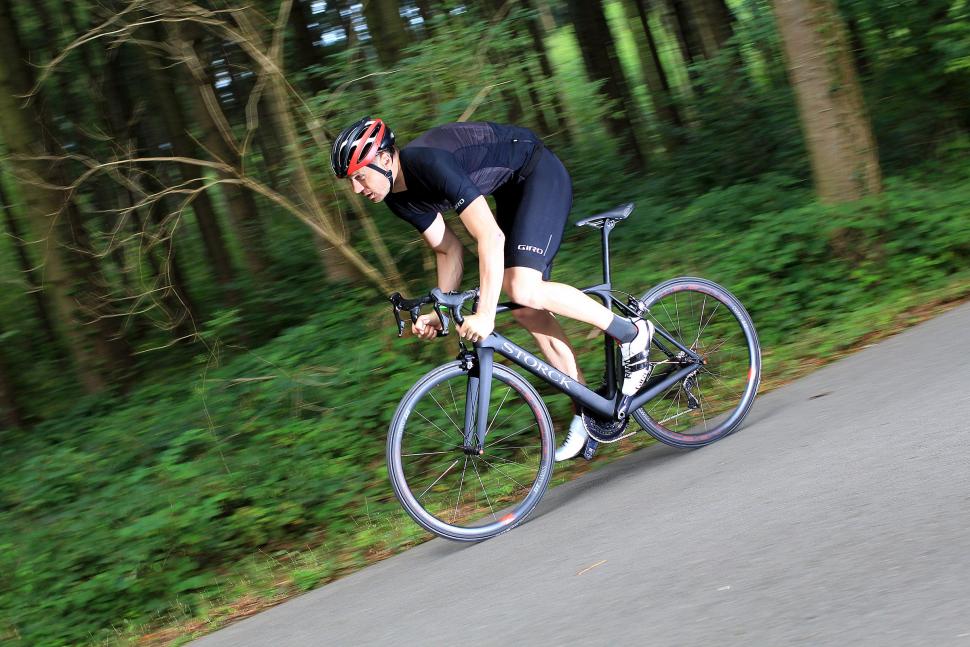 The only downside I’ve detected so far is the price. You’re looking at £5,559 for the frameset. Mass market, it ain’t. If you’re interested and you have that kind of money sloshing about, lucky you. Head over to www.storck-bicycle.cc for more details and to check out Storck’s lower price offerings.