Specialized is about to launch the Venge ViAS Disc, a disc brake version of its top-level aero road bike, and here it is.

The world has known about the new bike for a few months because Etixx-Quick-Step rider Fernando Gaviria stuck a pic on social media back in March, and then we spotted that it had been added to the UCI’s List of Approved Models of Frames and Forks in May. This is the first time we’ve had the chance to have a proper look, though.

Check out the green Specialized Venge that Peter Sagan rode on the final stage of the Tour de France. 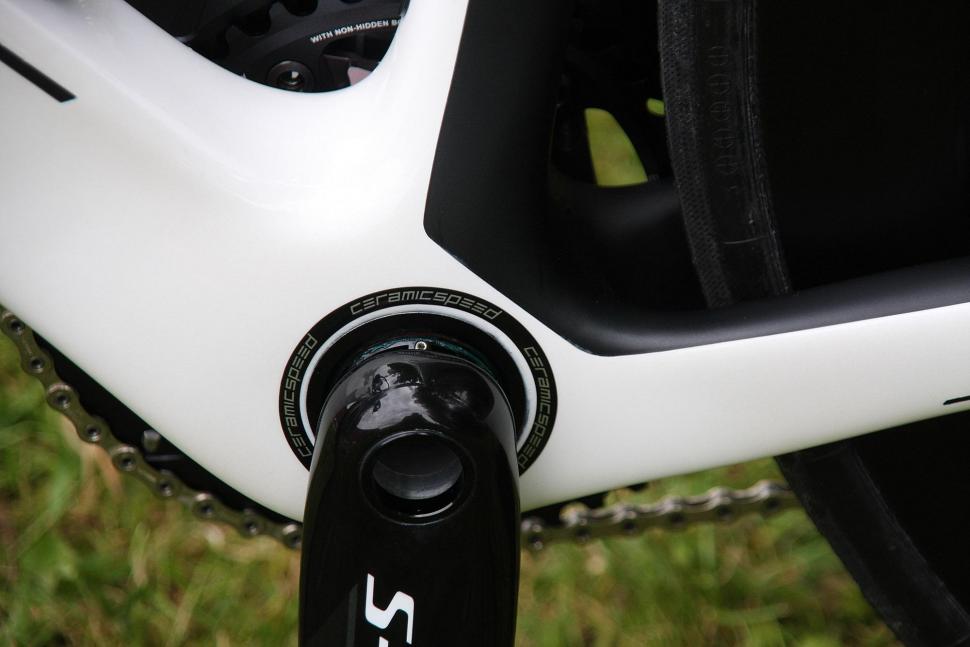 Specialized launched the rim brake version of the Venge ViAS at the beginning of the 2015 Tour de France. It was the first bike that Specialized developed in its own wind tunnel, which it calls the Win Tunnel. 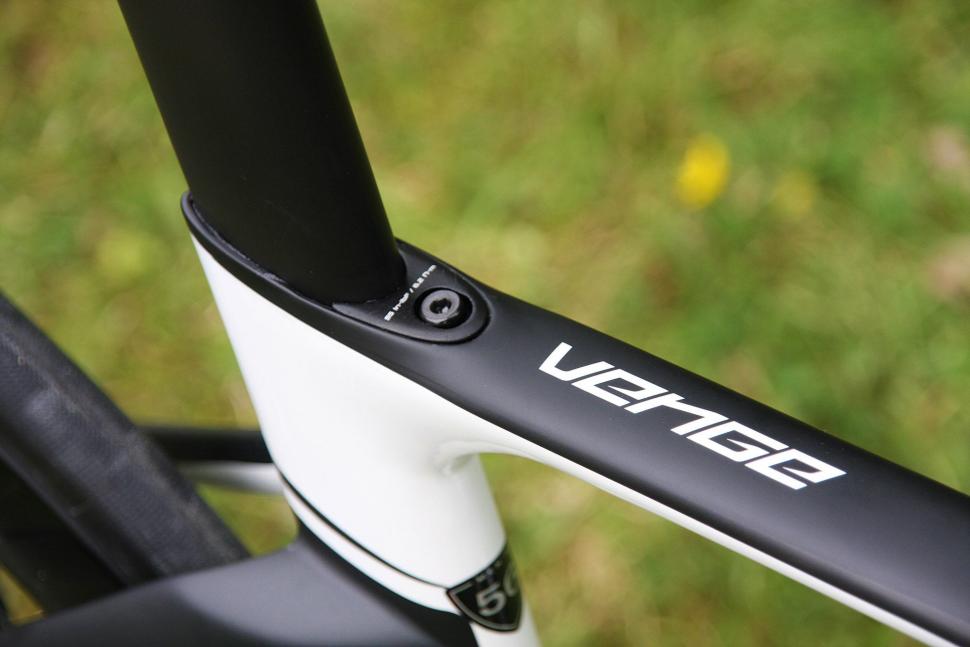 The rim brake Venge ViAS doesn’t have a whole lot in common with the previous Venge, with a completely new front end and a smaller rear triangle, the result of every “tube shape and trailing edge” having been scrutinised to make the new bike faster, according to Specialized. 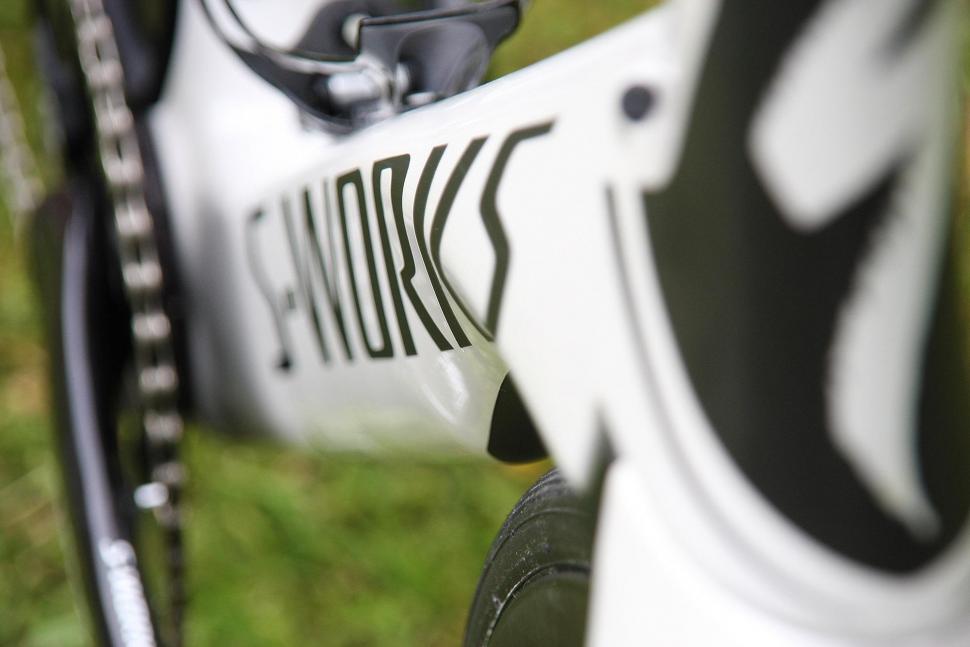 If you want to know more about the rim brake Specialized Venge ViAS, check out our story from last year. 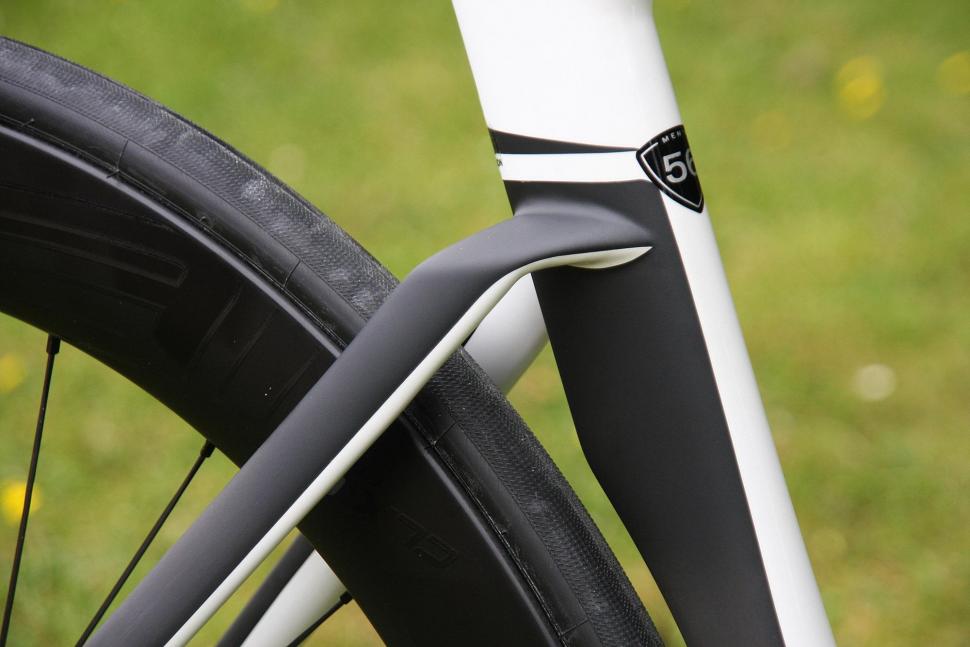 The disc brake version seems to follow the rim brake model in terms of geometry and frame shape, the exceptions being directly related to the brakes. 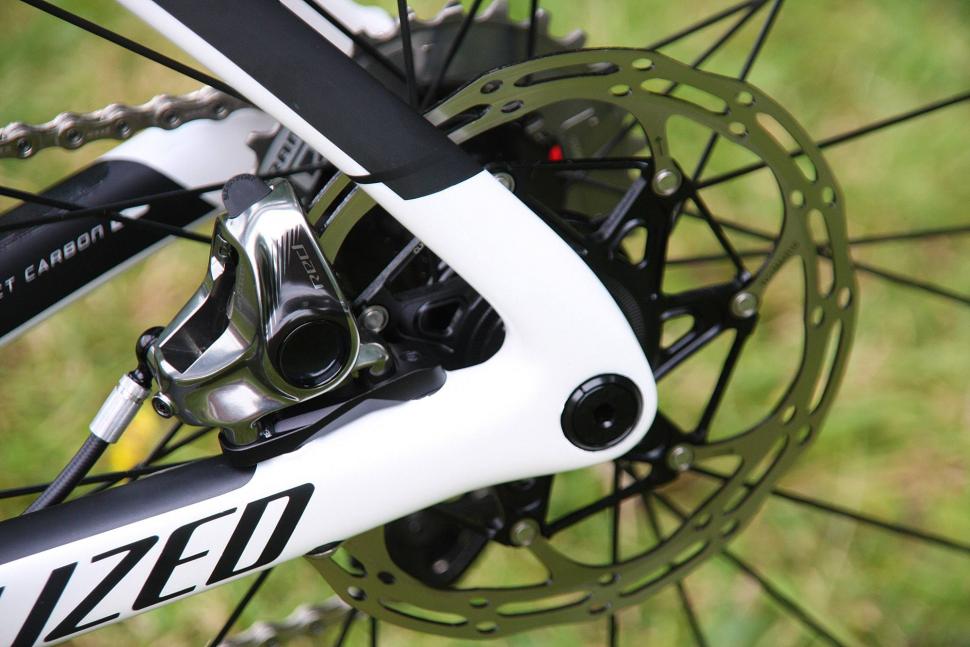 One of the key features of the rim brake Venge ViAS is that its brakes are integrated into the frame and fork. Specialized calls them Zero-Drag Brakes because, it claims, they create a “near-zero drag coefficient”. The new version features flat mount disc brakes and both the frame and the fork are thru axle. You need to use a hex key to secure the wheels because that’s a more aerodynamically efficient option than using quick releases. 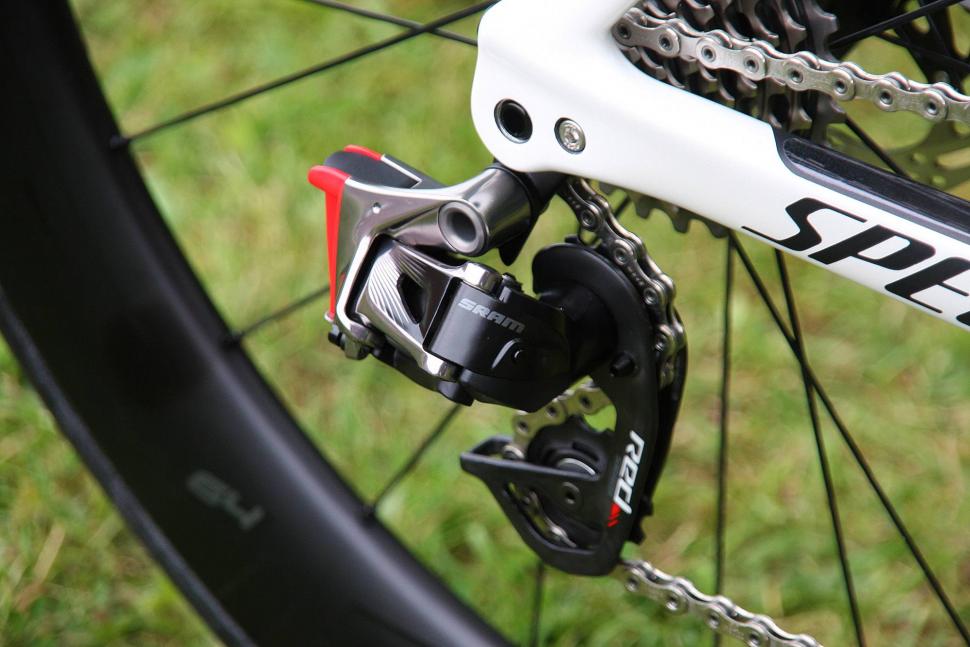 The cable routing is fully internal, as it is on the rim brake option. The version we’ve seen was fitted with a SRAM Red eTap wireless groupset so there are no gear cables anyway. The routing is still there for gear cables; Specialized isn’t doing an eTap-only Venge ViAS frameset as it is with the Tarmac road bike (there will still, of course, also be versions of the Tarmac with routing for gear cables and wires). The new Specialized S-Works Aerofly handlebar with tops shaped to minimise drag was fitted to many riders’ bikes in the Tour de France, although not in this riser version (not that we saw anyway).

The derailleurs in these pics are fitted with red blanks to keep them protected while the batteries have been removed for charging, by the way. 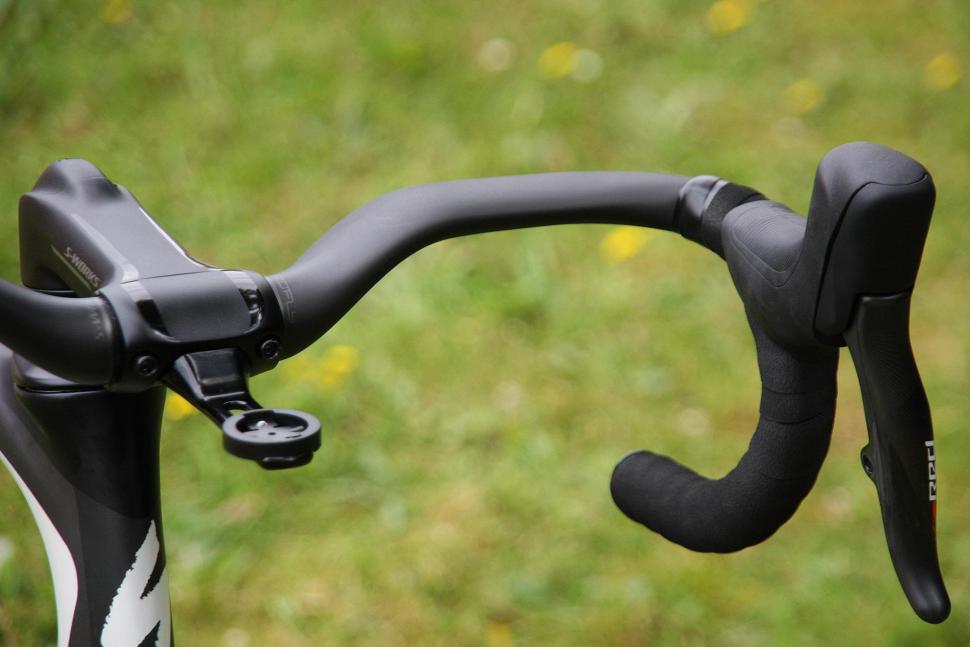 There’s a Garmin computer mount integrated with the stem. These Specialized S-Works cranks (just the cranks) will be available aftermarket at £400, though not with the Quarq power meter. 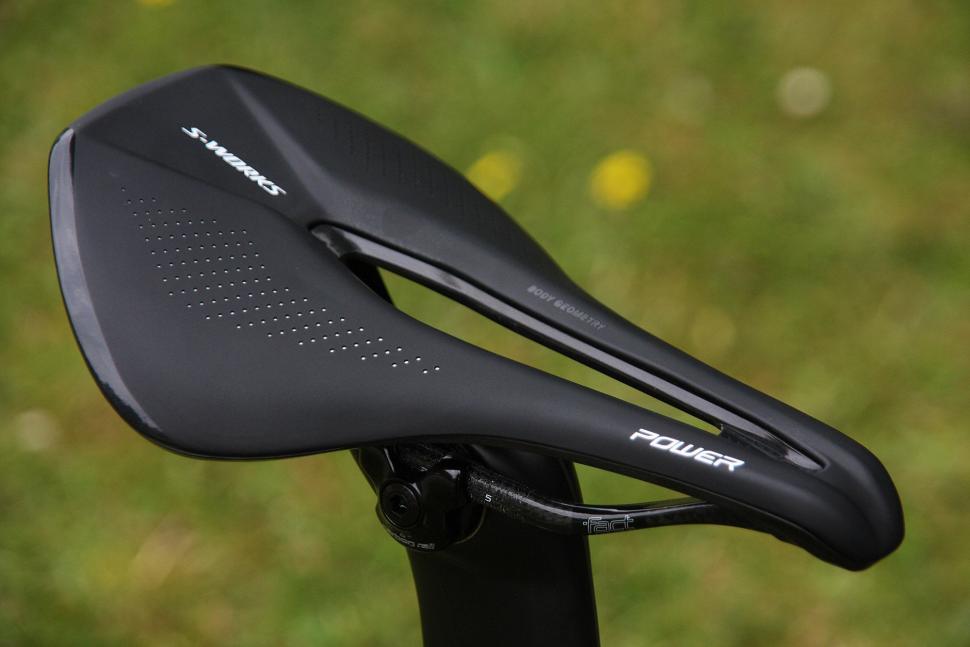 Specialized’s new S-Works Power saddle is shorter and wider than most, the idea being to provide more comfort when you’re down on the drops. We have one of these in for review so we’ll be able to let you know how it performs shortly. 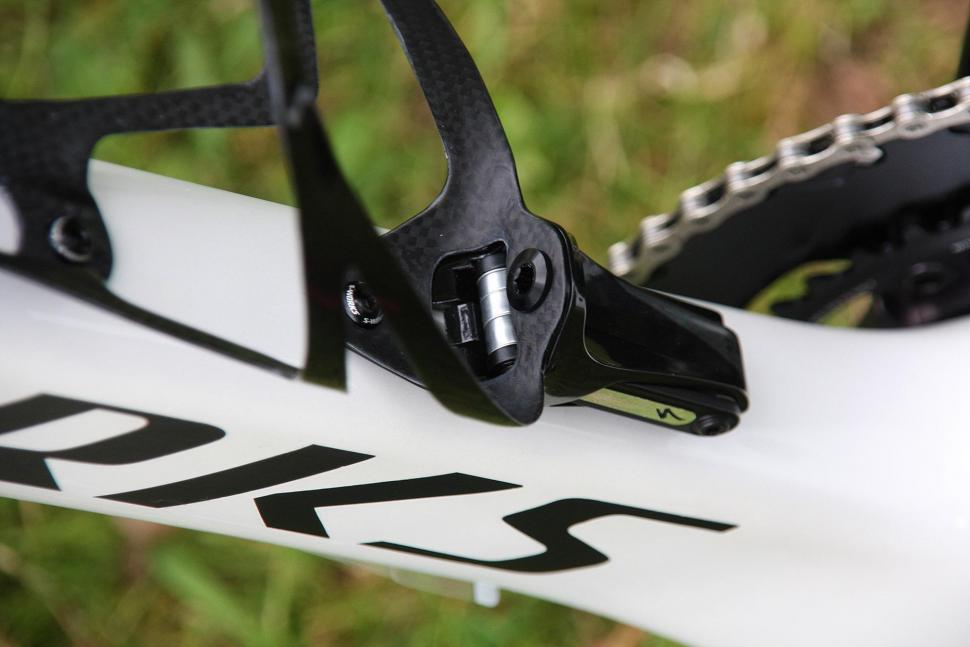 That’s a Specialized SWAT toolkit integrated with the bottle cage.

We don’t yet have a price on this Specialized Venge ViAS Disc built up with SRAM Red eTap but we can tell you that the brand is offering quite a range of bikes equipped with this groupset for 2017. There’s a Tarmac priced at £4,500, for example.

Stay tuned to road.cc for more details on the range as soon as we get them.