What bike for the Dirty Reiver 200km race?

The inaugural Dirty Reiver 200km gravel race took place in Kielder Forest at the weekend, and as soon as the pain and suffering recede into a distant memory, I’ll write a report on how it went. In short, though, it was a success; the organisation was excellent, food stops were among the best I’ve ever seen, and the course was demanding and challenging but ultimately rewarding, and the expansive views, especially including the snowcapped hills, helped to make it an event to remember.

What bike to ride a 200km gravel race on?

That was the big question for many people that had entered this first long-distance UK gravel race.

Gravel races are hugely popular in the states. The Dirty Kanza 200 has been going for over a decade, and that’s given regular participants plenty of time to decide what is the best approach regarding the choice of bike, tyres and equipment. Most people heading to the Dirty Reiver were heading into the unknown, and so there was a lot of discussion in the days and weeks leading up to the event about what bike and tyres to use.

The result on the day was a healthy mix, with a bit of everything on show. By far the most popular choice was a cyclocross bike. That’s hardly surprising, lots of people own a cyclocross bike these days, with 'cross racing very popular through the winter. Mountain bikes were well represented as well, from lightweight carbon fibre 29er hardtails to full-suspension models. There were a couple of road and touring bikes and there was a smattering of gravel/adventure bikes as well.

Bigger tyres were also popular. The common consensus seemed to be that a 40mm tyre was the right fit for the course, preferably one with a bit of tread to provide traction through the muddier sections. The other area of interest was how to carry all the essentials needed for what turned out to be a long day for most people. There was a list of required essentials, things like a survival blanket and emergency whistle, plus obvious things like spare tubes, tools, pump, mobile phone and plenty of food. Some went for frame bags and packs and huge saddle bags, many went with hydration backpacks and some tried to stuff everything into jersey pockets. Your classic cyclocross bike was in abundance, this one with cantilever brakes and some bigger tyres fitted. Salsa is a US company that has tried to align itself with the growing gravel and adventure bike market, and the Warbird was a bike designed expressly for this sort of riding. The Kinesis Tripster ATR was a popular bike at this event. This one actually belongs to Rory Hitchens the marketing man at Upgrade Bikes, who look after Kinesis in the UK. He fitted 40mm tyres and went with Apidura frame and top tube bag to store all his food and other essentials. 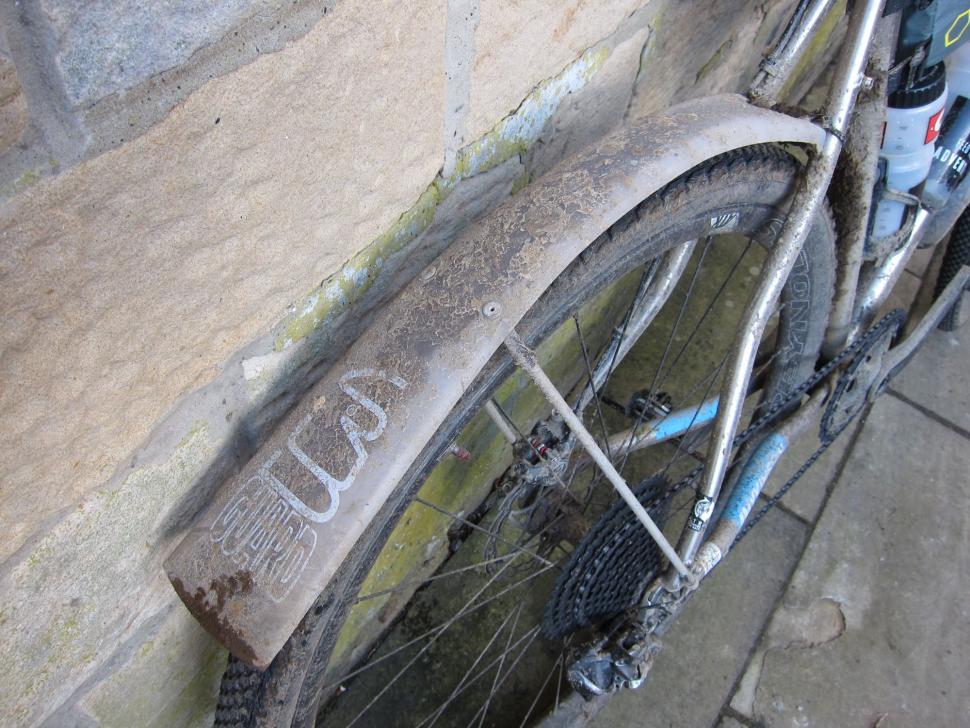 It didn't rain, but the course was quite wet and muddy in places. Mudguards were a sensible addition. Rory had repurposed an old Crud Guard mudguard onto his Tripster. Could it be time for Mr Crud to bring it back as a dedicated gravel guard? A Genesis Longitude rigid steel mountain bike with a riser handlebar and single ring drivetrain and down tube mudguard. And flat pedals. 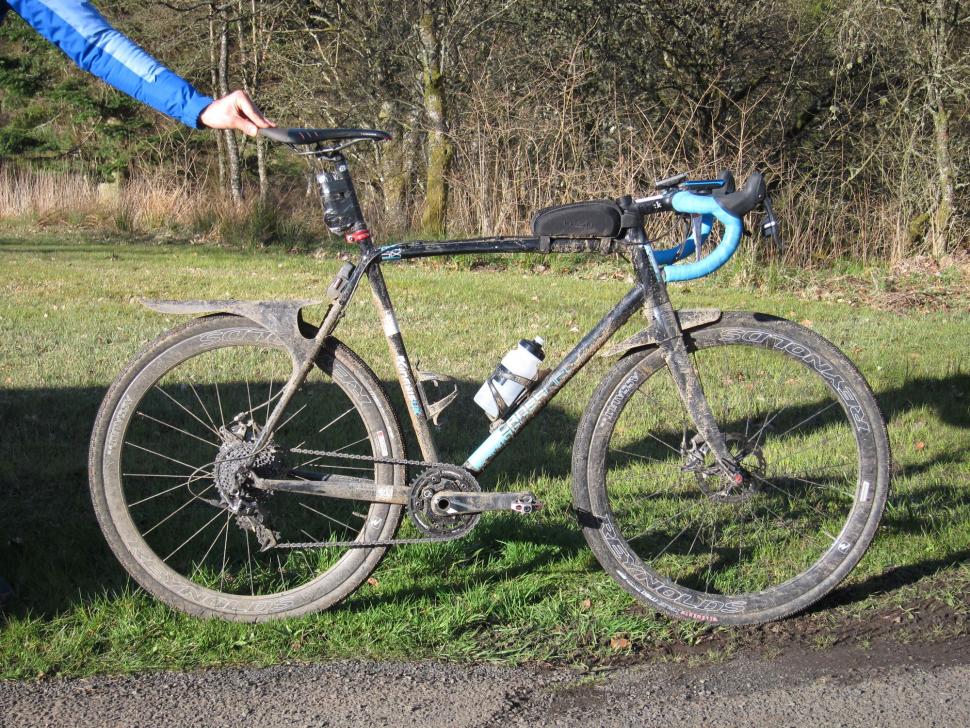 Rear mudguard fitted to the rear stays. Not pretty, but helps to keep your bum dry on such a long ride, and with a few boggy sections and some river crossings, it would have been appreciated. Double wrap bar tape, inspired by the cobbled classics no doubt, but brilliantly inspired for this event. Lots of carbon fibre cyclocross bikes. This Planet-X with mechanical disc brakes, top tube bag and saddle bag with what appears to be a broken bottle cage on the down tube. It wasn't all skinny tyres. I spotted a handful of mountain bikes, including this Santa Cruz carbon fibre 29er full-suspension bike. The big tyres and suspension would have been nice on some of the rougher trails. 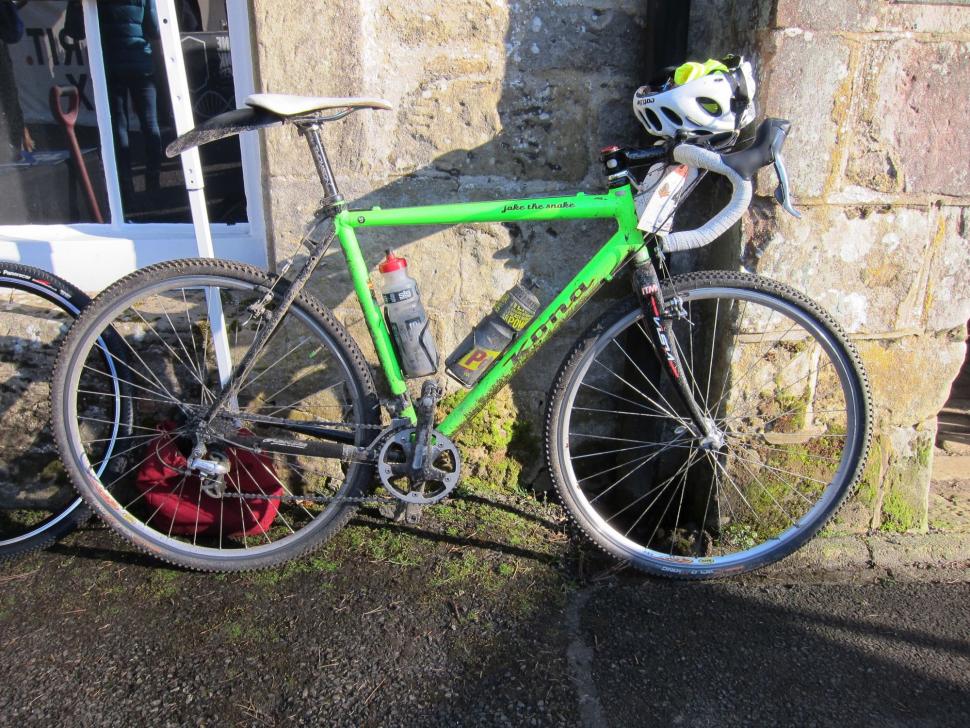 A straight up Kona Jake the Snake cyclocross bike with seemingly no special modifications made for the event, other than the bottle cages and mudguard. Another full-suspension mountain bike, this one is a Giant Anthem. Impressed with the luggage squeezed into the front triangle around the bottle and rear shock. Another Kinesis Tripster ATR. Said they were popular didn't I... Niner makes the RLT 9 which is designed for gravel racing, but this is the company's BSB 9 RDO, a carbon fibre cyclocross race bike. It was fitted with the Schwalbe G-One tyres. Specialized has had a lot of success on the cyclocross race scene with its Crux, so it was little surprise that they were out in abundance at Dirty Reiver. This one had been upgraded with some Reynolds Attack carbon clincher wheels and WTB Nano 40mm 'cross tyres. Another cyclocross bike, this time the Trek XO2, an aluminium frame with cantilever brakes. Minimal luggage for this rider, just two water bottle cages and a top tube food bag. There weren't as many gravel/adventure bikes as you might have imagined. Here's the GT Grade in carbon fibre with Schwalbe G-One tyres. Other suitable bikes I spotted but failed to photograph include a Cannondale Slate and Open UP. Another mountain bike. A Charge 29er with a rigid carbon fibre fork and lots of Alpkit luggage. Check out the Brooks saddle. Another Niner, but a mountain bike this time with a RockShox suspension fork and rear mudguard. Only space in the compact frame for a single bottle cage, though. 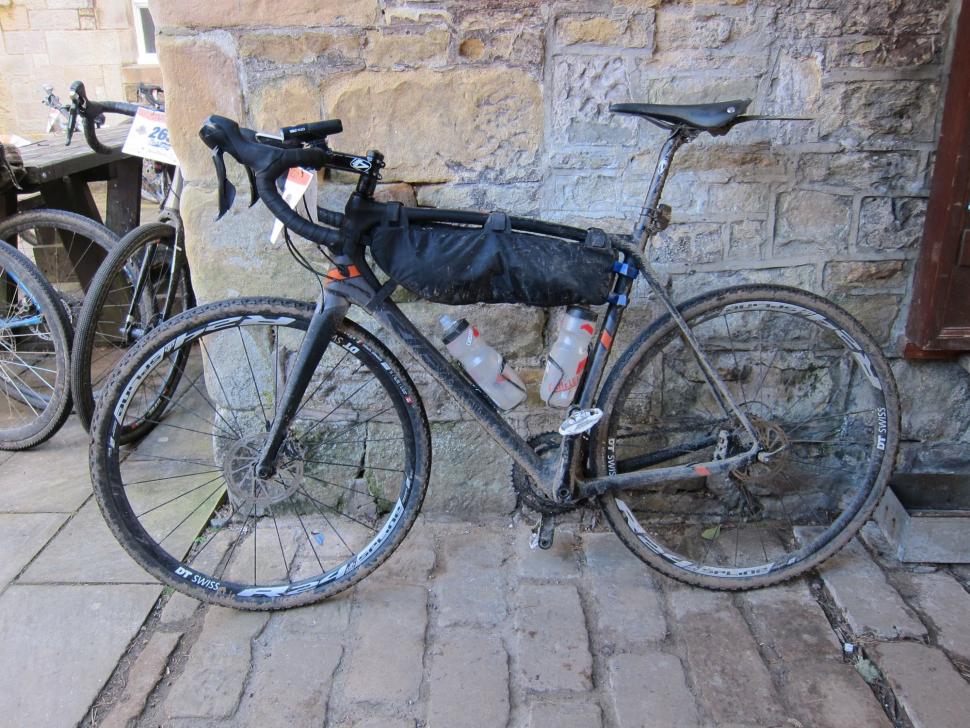 A hardtail mountain bike would have been a some parts of the course. Here's a Canyon aluminium 29er hardtail. Someone has had a rummage around in the shed and found a pair of bar ends from the 90s. 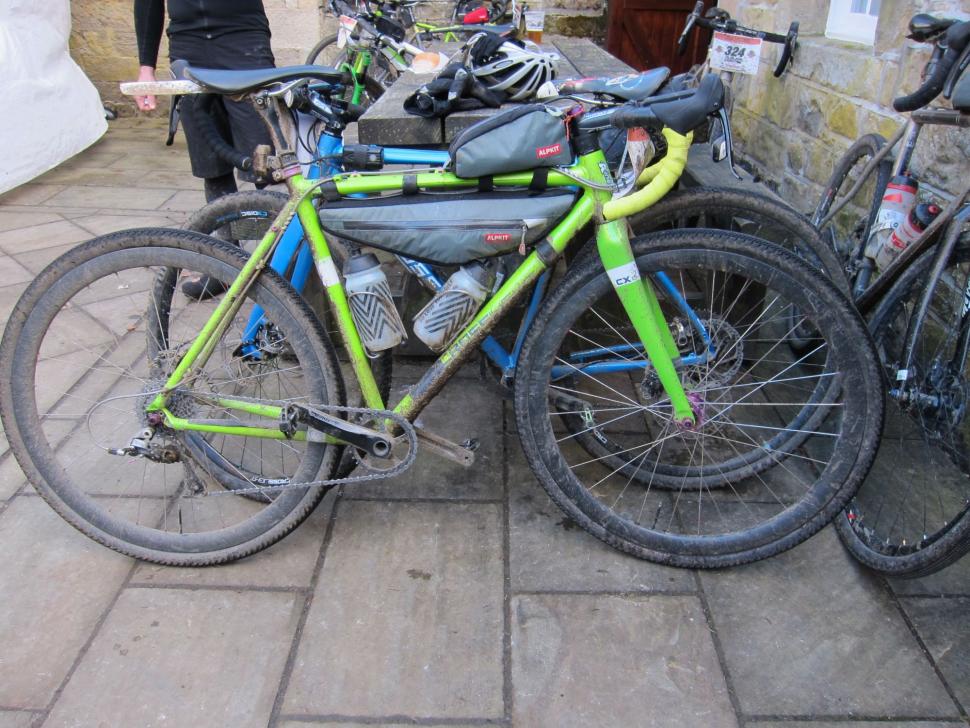 Yet another Kinesis cyclocross bike. This one has a SRAM 1x drivetrain but no clutch rear mech. Wonder if the chain stayed on during the rougher parts of the course? A Merida carbon fibre cyclocross course that has been suitably modified, with a rear mudguard and essentials, shared between a saddle pack and water bottle case.

Josh Ibbett, who was one of the fastest people around the course, proved that you don't need a gravel, cyclocross or mountain bike to be fast, because he used a road bike, albeit one heavily modified. It's a Mason Definition aluminium road bike fitted 35mm Schwalbe G-One tyres. He also goes for minimal on-bike luggage to keep the weight down. And here's the Parlee Chebacco that I rode. Nice isn't it? The bike was awesome, and apart from one flat, didn't put a foot wrong. I tried to keep the weight down (to help on the climbs) with everything stuffed into the saddle bag and my jersey pockets stuffed with waffles and malt loaf.