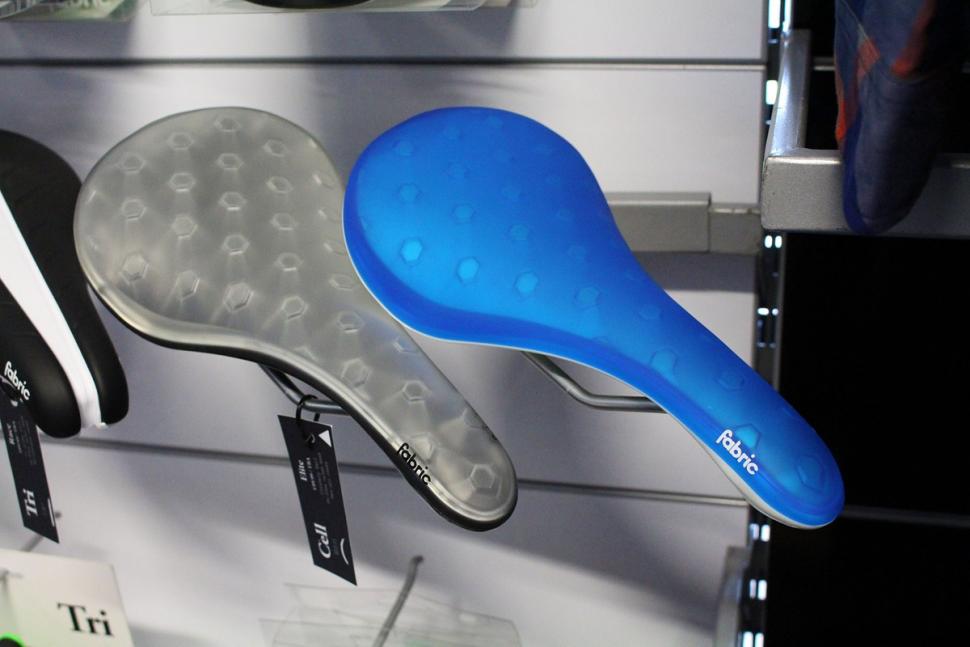 This week's most interesting components

We've been out looking at the latest bike components this week and here are the most interesting new products we've spotted. 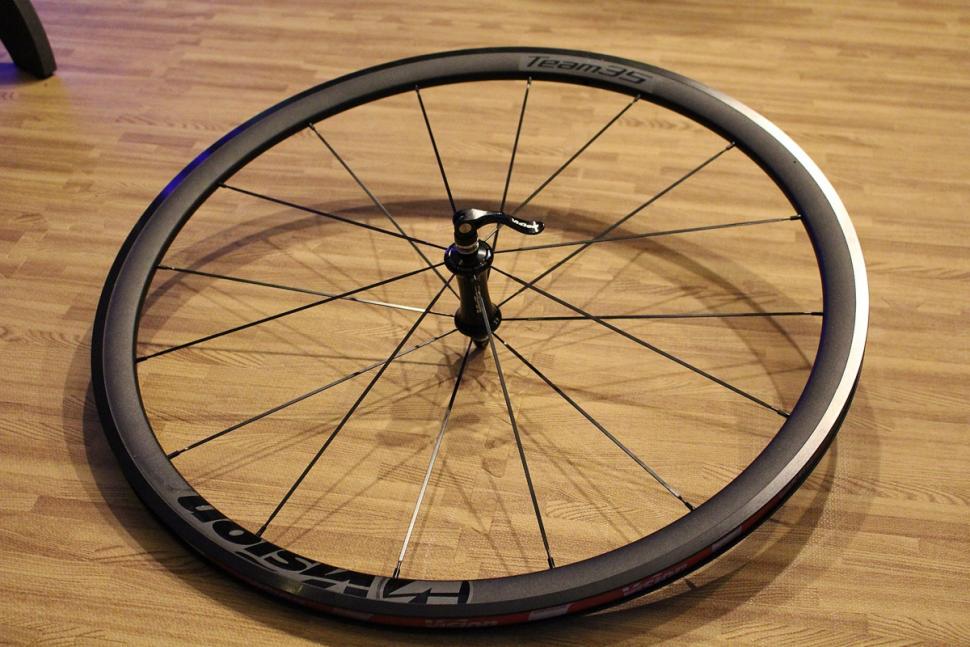 Vision have a couple of new wheels. First up is the Team35. This is an entry-level alloy wheelset with a 35mm mid-section rim. 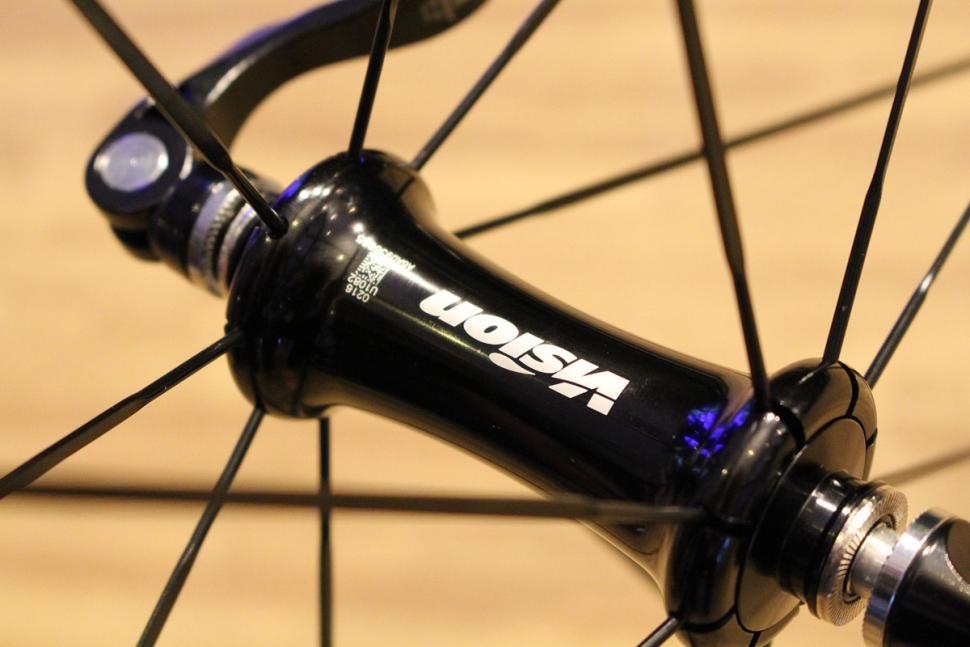 The Team35 uses aero bladed spokes and a hubset with open-cage bearings, and will retail for £229.95. 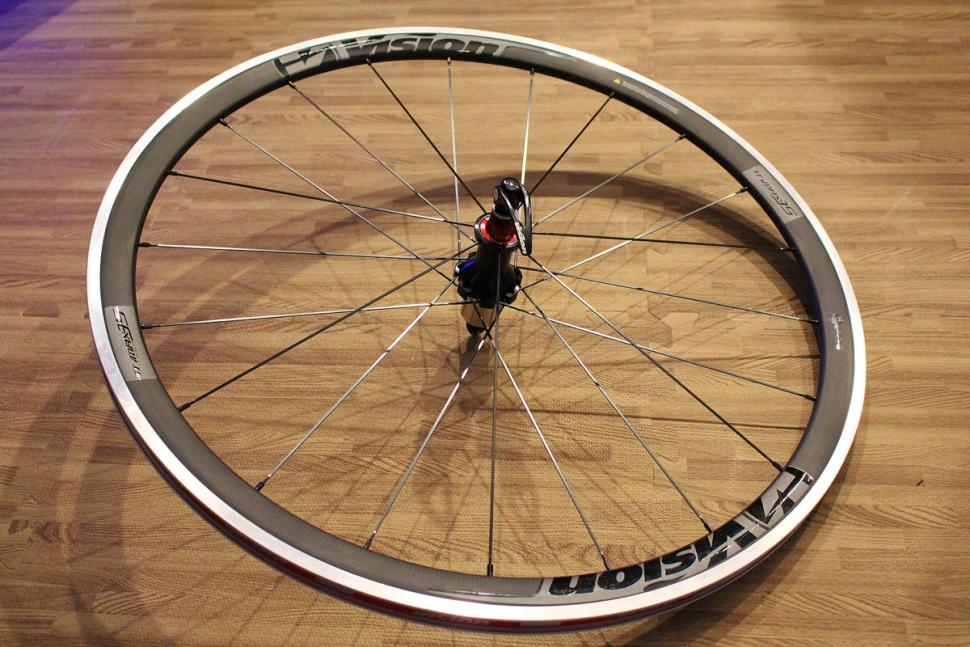 The Trimax 35 is also new. It features a composite carbon/alloy rim, with a thin alloy substructure with carbon layered over the top to add stiffness. 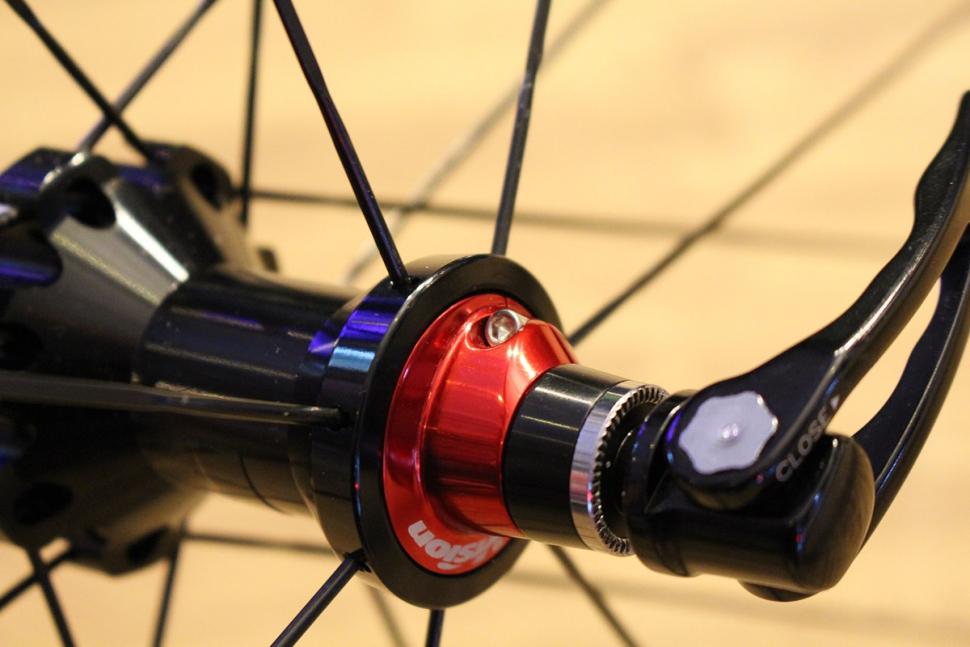 Again, you get aero bladed spokes. The hubs feature Vision's external preload adjustment system to get them running smoothly with zero lateral play. The Trimax 35s will cost £729.95 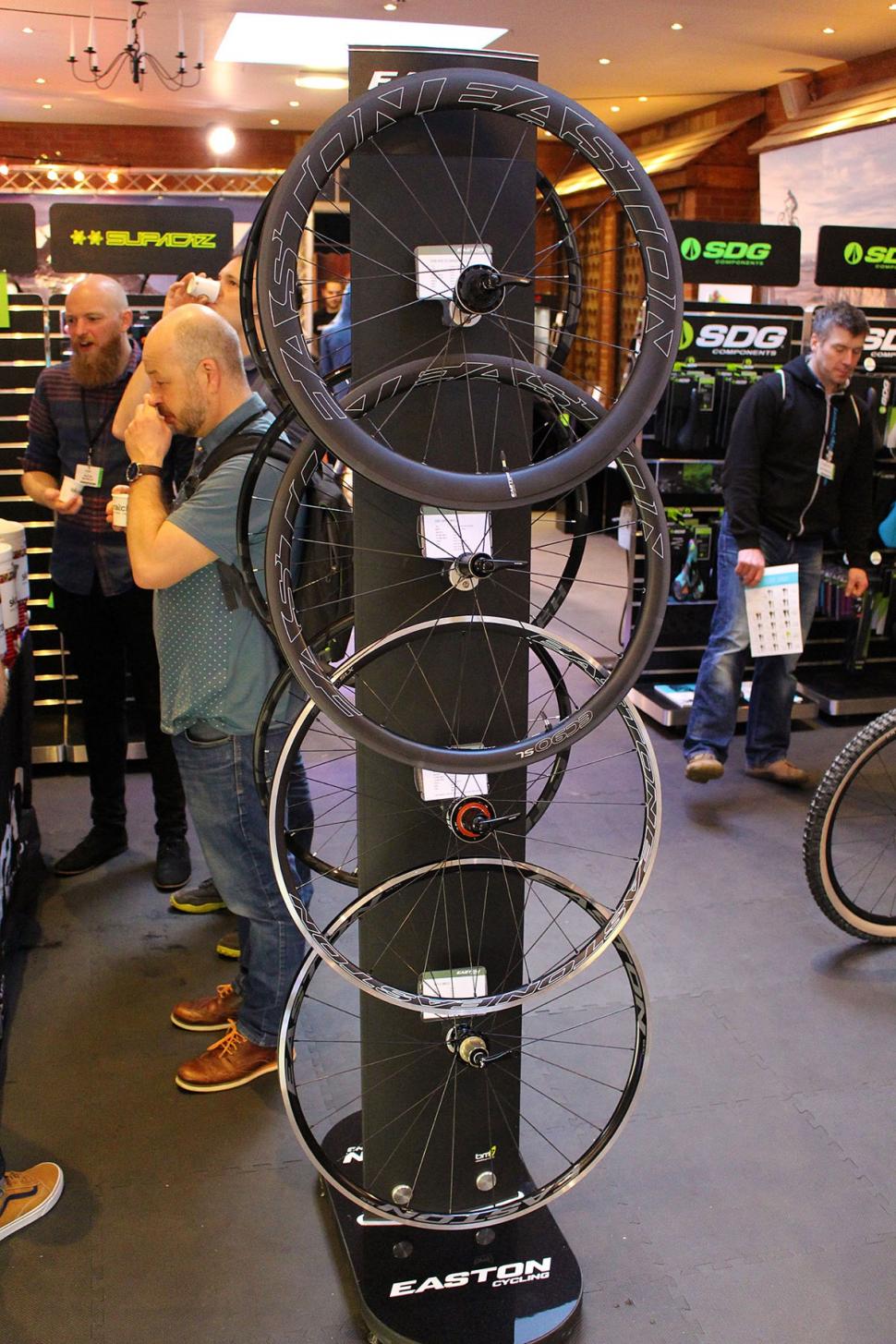 Easton's carbon and alloy wheels have been around for a while but the running change for this year is that they're all tubeless compatible. 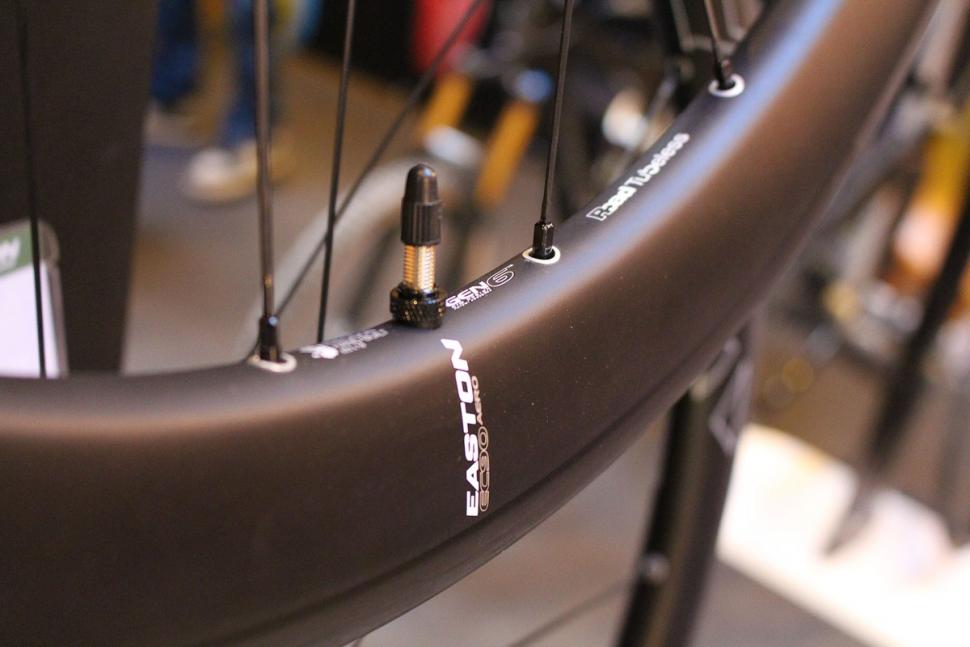 We'll have a set of the EA70 alloy wheels in soon for a review on road.cc, with some carbon EC90s landing later in the year. 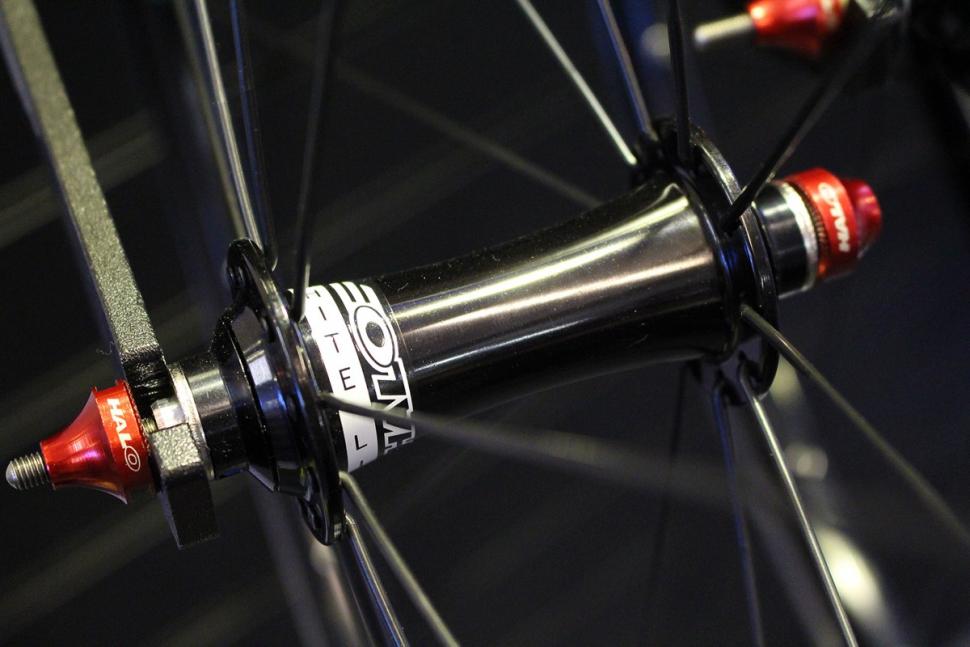 Halo have responded to repeated requests for an entry-level wheelset by making... Go on, guess. 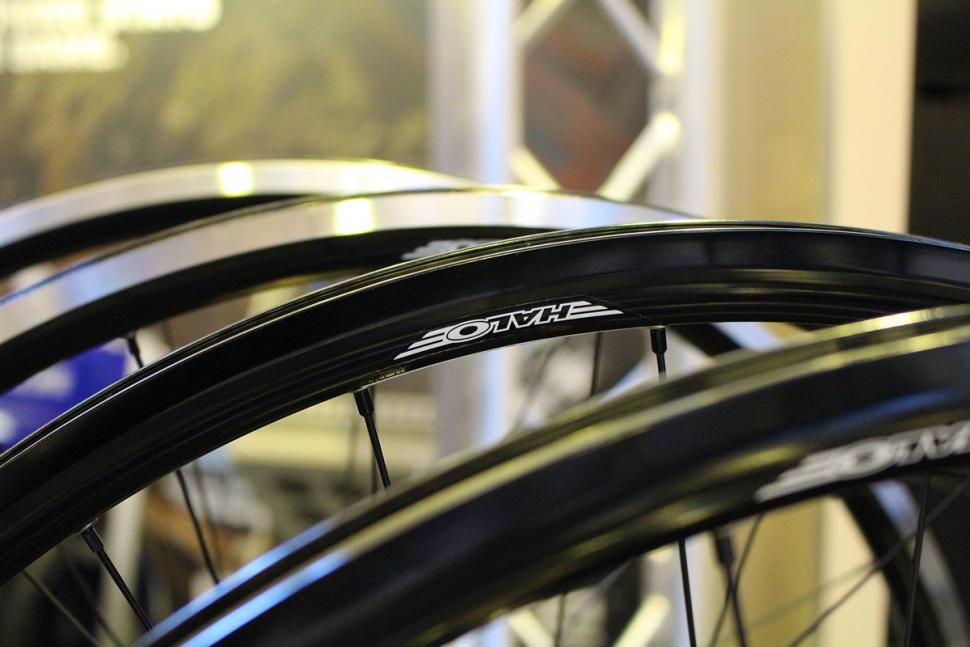 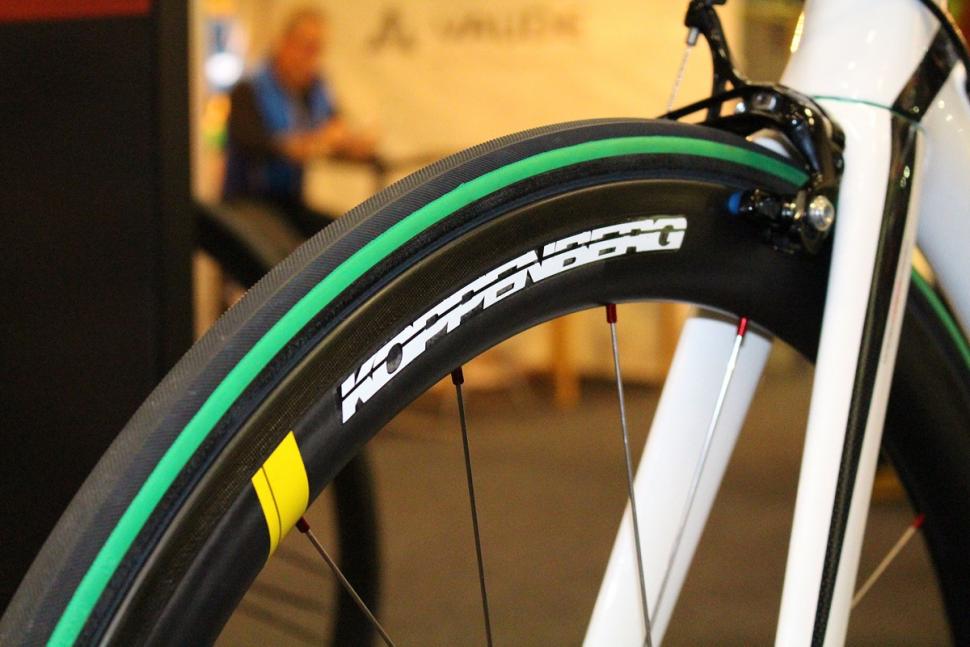 Spin Industries have redesigned their excellent Dark Energy wheelset and made it even wider: now it's 28mm at its widest, which is very wide indeed. Spin say it's optimised for 25mm and 28mm tyres. The price remains at £990. 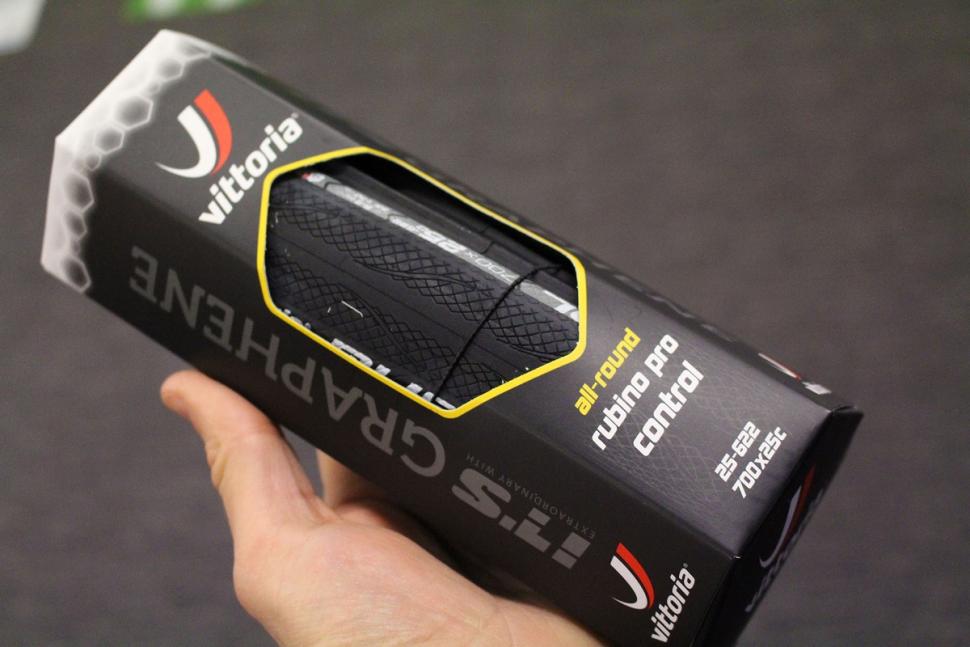 Vittoria started adding Graphene to their top end tyres when they released the Corsa Speed  but that tech has now worked its way down the range.

What are the advantages of adding graphene? Better rolling resistance and grip, and fewer punctures, according to Vittoria. Pretty much everything you want in a tyre, then.

Will this finally be the year of tubeless? Schwalbe's 30mm S-One and Pro One are two of the best tyres we've ever had the pleasure of trying, so that bodes well. There are more and more manufacturers giving it a go in 2016. 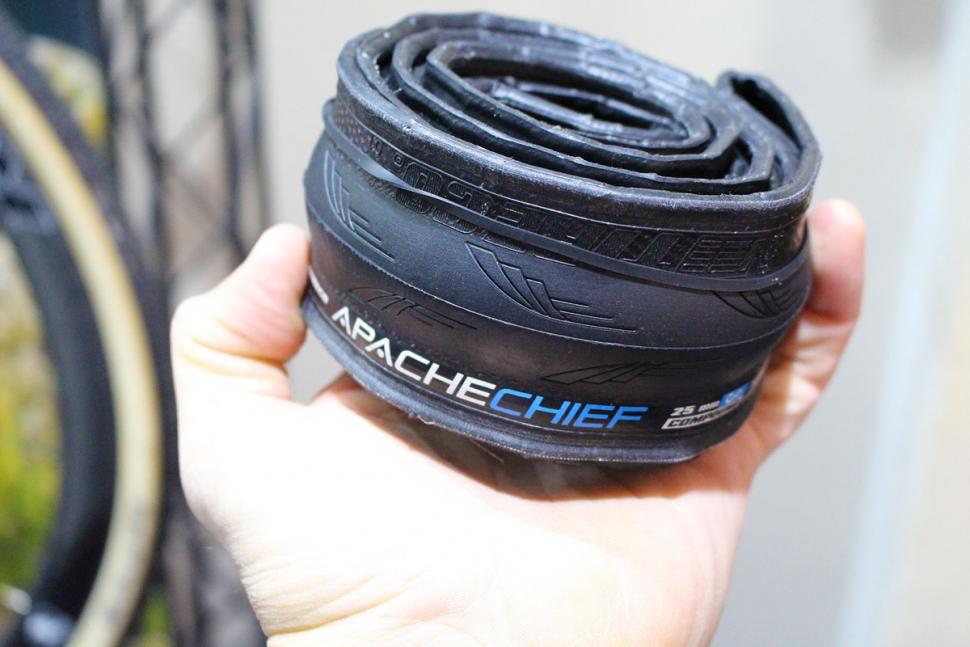 Vee Tires have the Apache Chief, a slick road tyre available in 25mm and 28mm widths. Some of those are on the way to the office for reviewing. 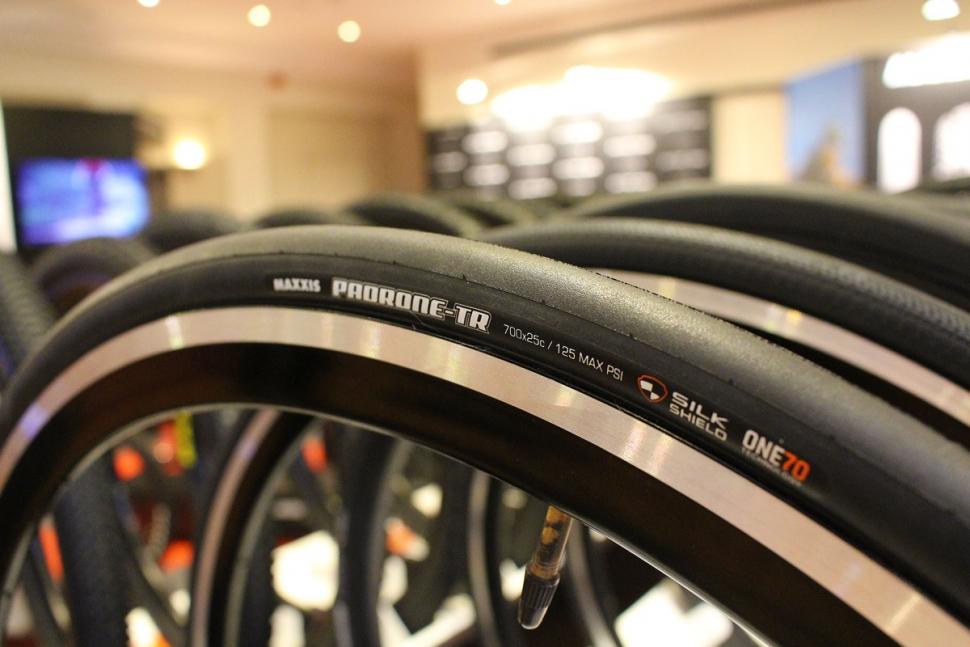 Maxxis have the Padrone TR in the same sizes. We think. The website says 28mm only, but the one we shot was a 25mm, so let's assume both. 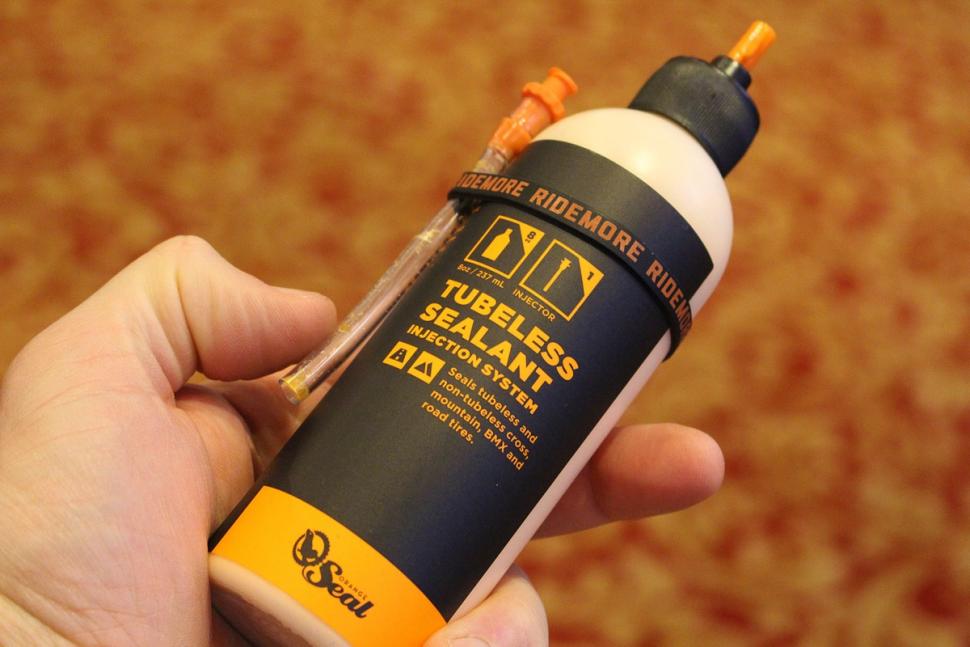 If you're running tubeless you'll be needing sealant. Orange Seal is the culmination of two years of development work to find a sealant that didn't 'booger up' (their words!) inside your tyre and was capable of sealing bigger holes. They showed us some pics of some pretty sizeable slashes that the sealant managed to mend. 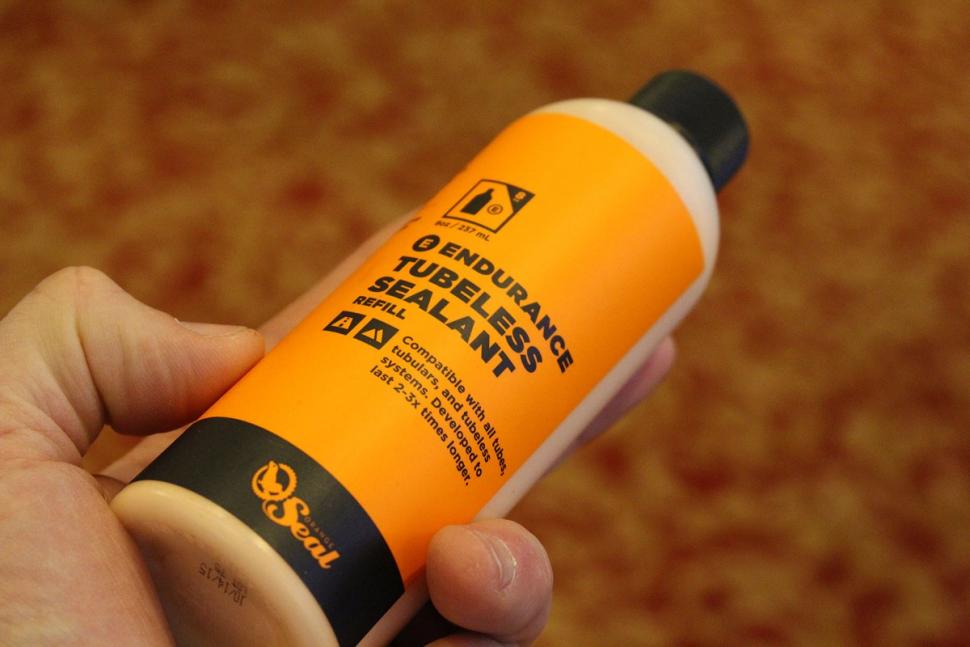 Orange Seal comes with a dipstick so you can take out your valve core and check the level. The standard sealant needs checking every 30-60 days and topping up as necessary, and there's an Endurance version which lasts up to three times longer at the expense of a little bit of sealing prowess.

Fabric's new Cell saddle has taken a while to make it to market but it's here now and available in a range of colours at £49.99.

The Cell uses a unique construction of air cells, similar to those used in some running shoes, within the saddle to provide the cushioning. Like Fabric's other saddles, it uses a bonded construction between the upper and lower layers to give it a clean look.

At 155mm wide it's designed for more upright riding so it's a good choice for urban, commuting or trail use.

While we're on the subject of saddles, Dave had a go at the SQ Lab saddle measuring light-up seat. How does that work? Here's how!

The seat has a soft plastic insert with a grid of holes. You place a sheet of paper on the holes and sit down, pulling yourself down on to the seat thusly... 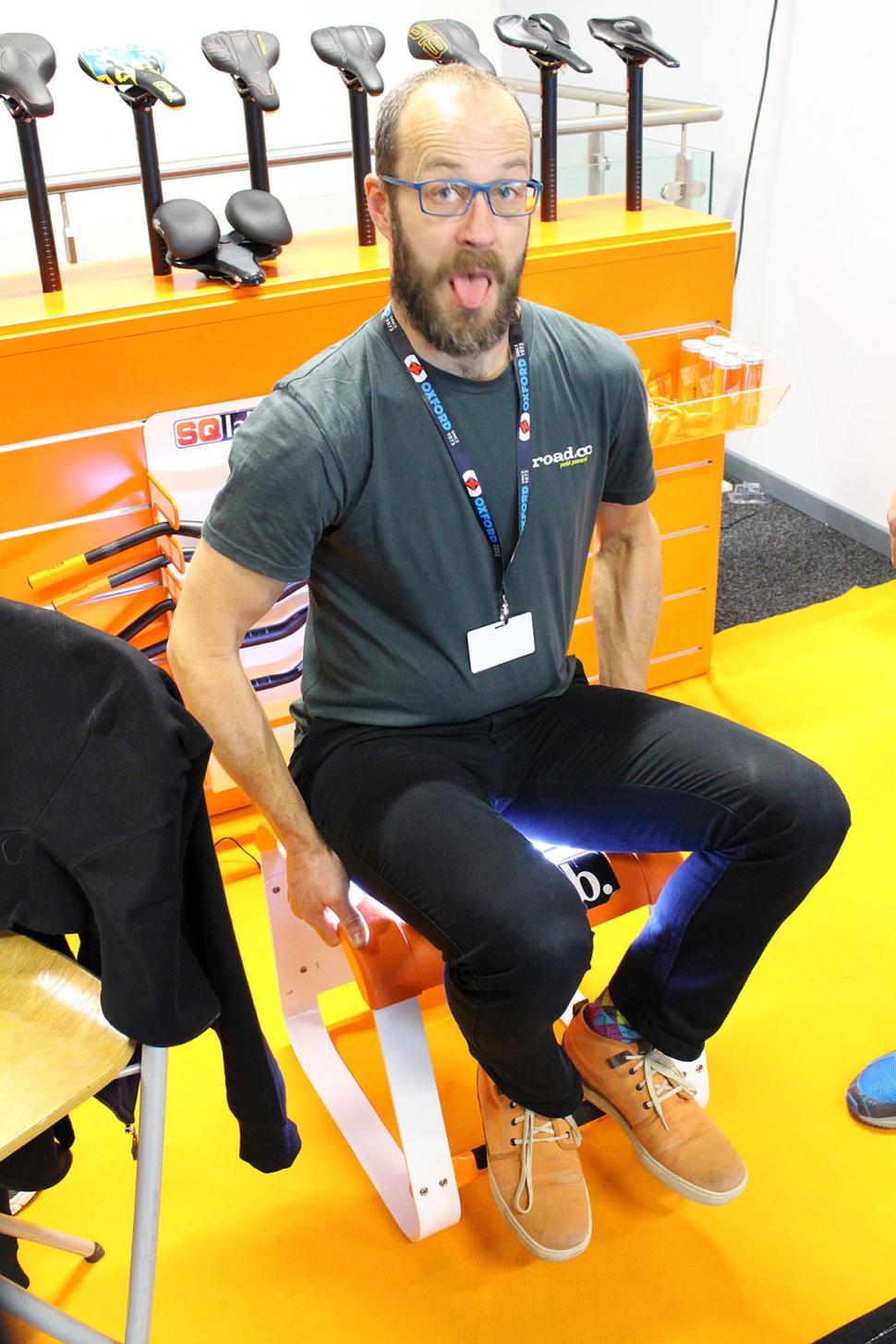 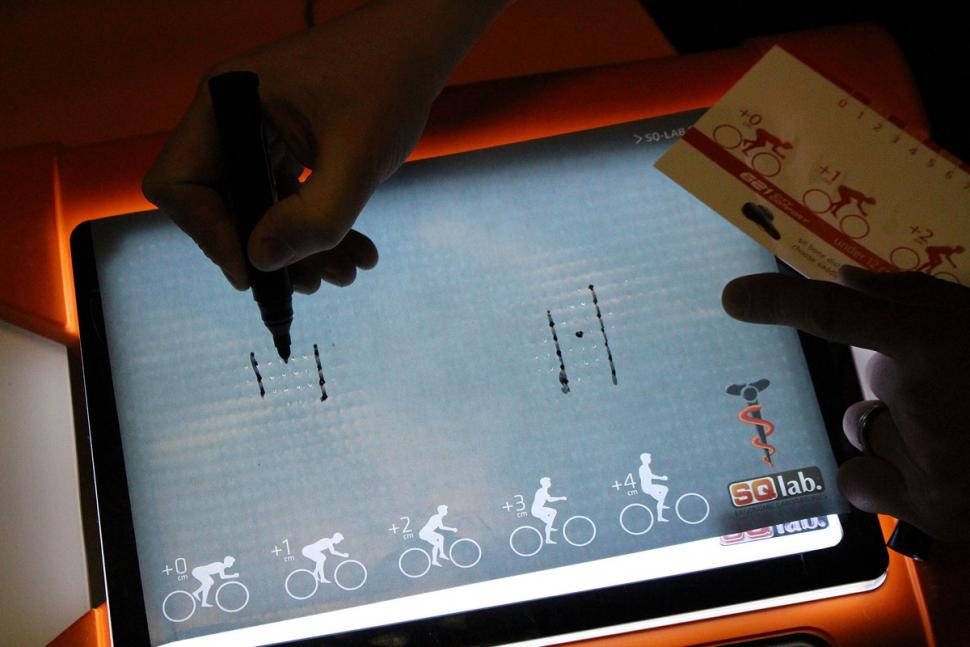 Dave came away with a saddle to test based on his readings, so we'll report back on how that works out for him. 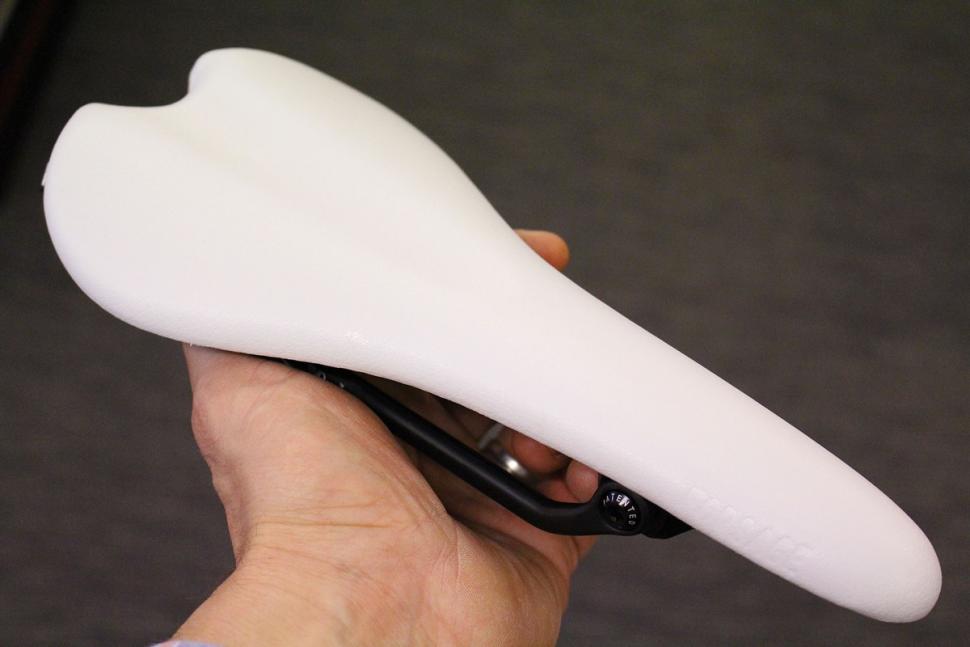 Morgaw were showing off their range of saddles. Their USP is that the rails are isolated from the shell of the saddle by two elastomers. This has two benefits: it takes the edge off the bumps and it also allows the saddle to rock slightly when pedalling which they say is better for comfort. SQ Lab agree with them there; their saddles have side-to-side flex built in too. 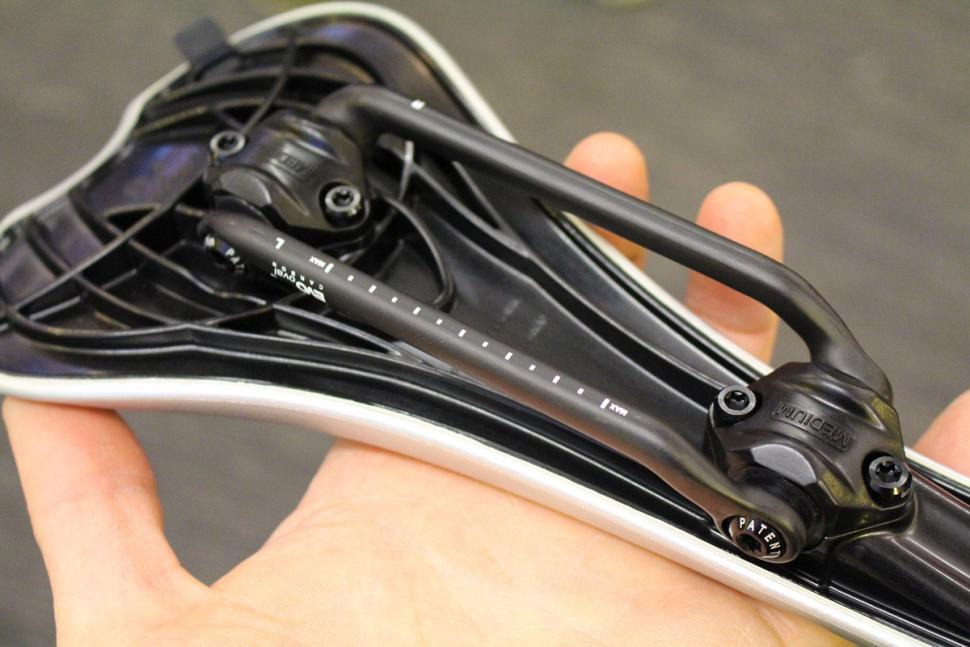 The Forsage is the road saddle but the Trian XC saddle also looks interesting for those that prefer a more rounded shape. Carbon and alloy rail options are available, and for the money they're very light. The £119.99 carbon-railed version is under 200g (claimed), the £89.99 alloy version just over.

If you want to customise your saddle then there are three types of elastomer available in different levels of firmness, and anodised bolts to match your frame.

Everyone seems to want to make their own pedals. For the road market the most popular cleat by far is the Look Kéo, and we saw as a couple of new players. 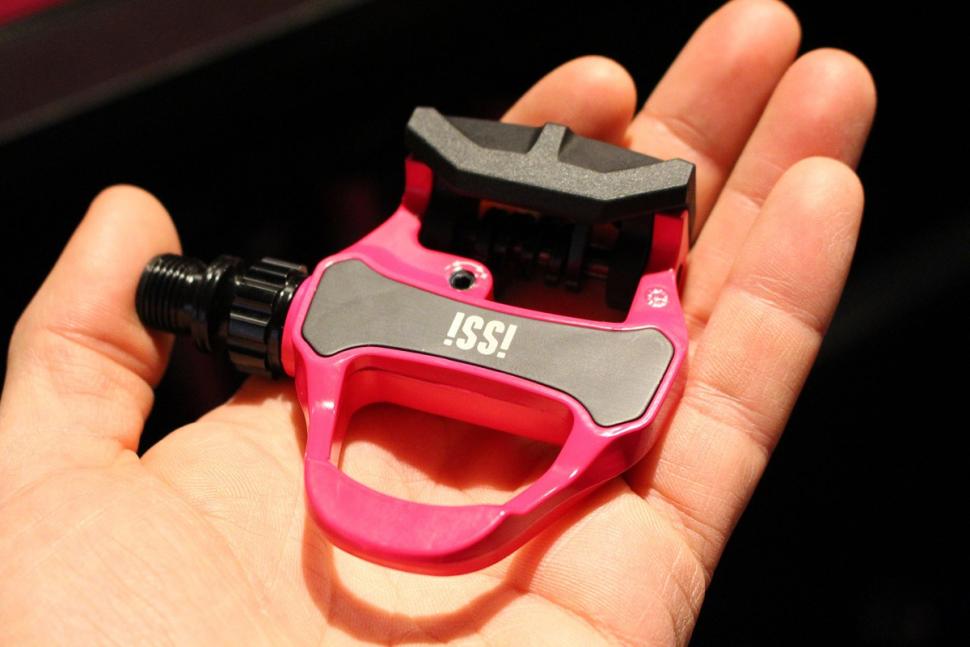 Issi had a new range of pedals on display in natty colours. Their website doesn't make mention of their single sided road pedal but it exists all right. Look, here it is!

Issi pedals are all fully rebuildable and there's a spindle kit available for each one. 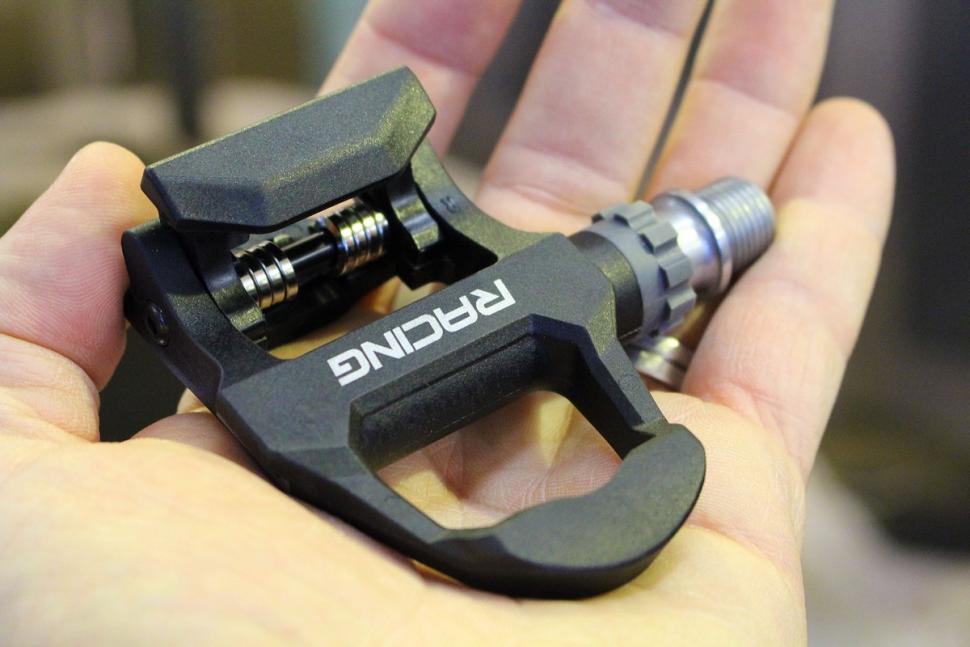 Another new brand was HT Components. They had not one, not two, but three Kéo compatible pedals in the range. There's a composite-bodied one with a cromoloy axle (218g, £60), a carbon/cromoly one (199g, £90) and a top-of-the-range carbon/titanium pedal (£170) that weighs a claimed 166g per pair. They certainly felt feathery light in the hand.

Again, it's a Look Kéo compatible cleat; the pedals get shipped with a 3° float cleat and there's also a 7° float version available.