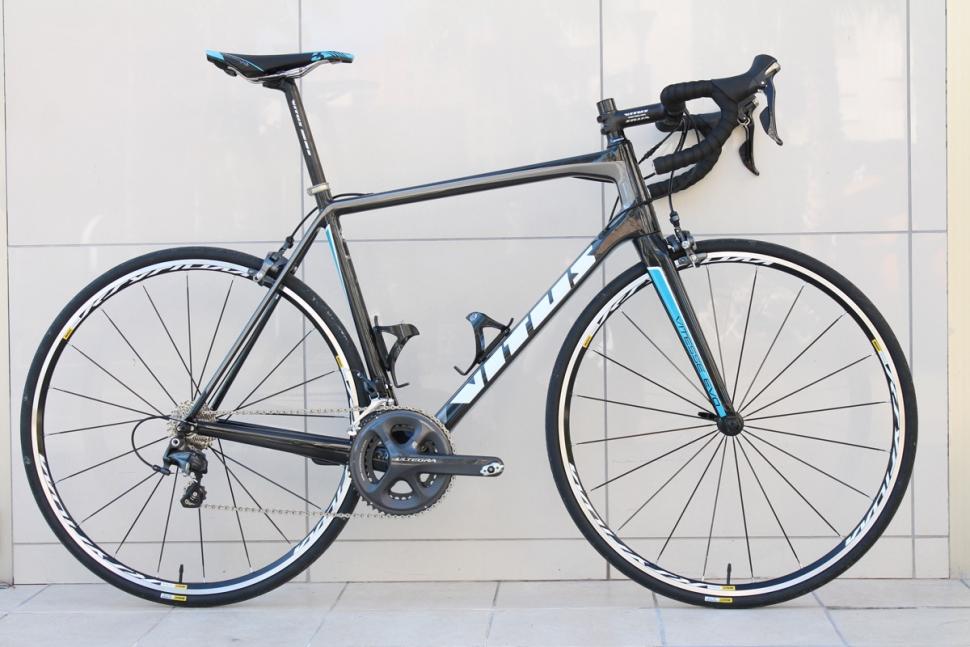 The Vitus Vitesse Evo is a carbon-fibre race bike that proves you can get a helluva lot for your money these days. Equipped with a Shimano Ultegra 6800 groupset and Mavic Ksyrium wheels, it has a retail price of £1,899.99, although you’re actually looking at £1,709.99 through Chain Reaction Cycles.

Vitus - pronounced vee-tus – was a French framebuilder that was famous in the 1970s and 80s, and it was relaunched by Chain Reaction in 2010. It’s now the company’s largest in-house brand. They’ve flown me out to Calpe, Spain, to check out the 2016 road range. Why Spain when Chain Reaction is based in Northern Ireland? Because the An Post Chain Reaction UCI Continental cycling team is here on a training camp at the moment, as are loads of others – Astana, FDJ, Katusha… – and also because the weather is nicer (pushing 20°C earlier today, thanks for asking). 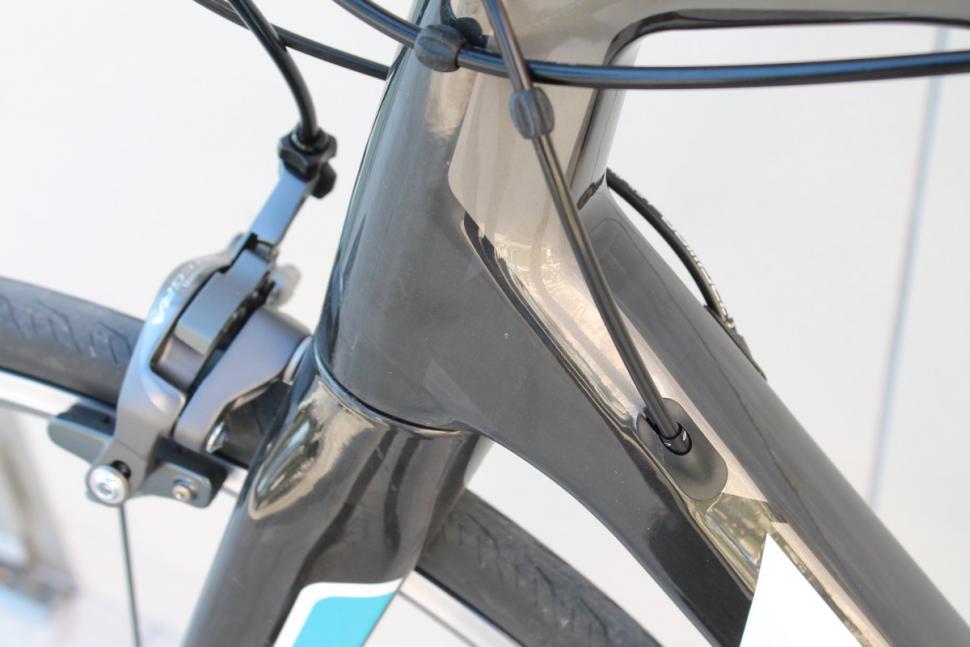 So, this morning I got the chance to ride the Vitus Vitesse Evo for about 3 1/2hrs in a group that included none other than Sean Kelly himself – you know, the winner of the Vuelta, a whole bunch of Classics, Paris-Nice for seven successive years, and world number one for six. Kelly reckons he won about 75-80% of his major victories on Vitus bikes. We did a couple of fairly big climbs today, including Col de Rates, some hairpin descending, and lots of other lumps and bumps. You’ll have to take my word for it because we didn’t get any action shots. The Vitesse Evo is the bike the AN Post Chain Reaction team ride so it’s UCI accredited and it comes in a race geometry. Let’s deal with that straight away. I was on the 58cm model which comes with a 540mm seat tube, a 580mm effective top tube (it slopes down considerably along its length), and a 175mm head tube. The stack (vertical distance from the centre of the bottom bracket to the top of the head tube) on that is 582mm, and the reach is 403mm. 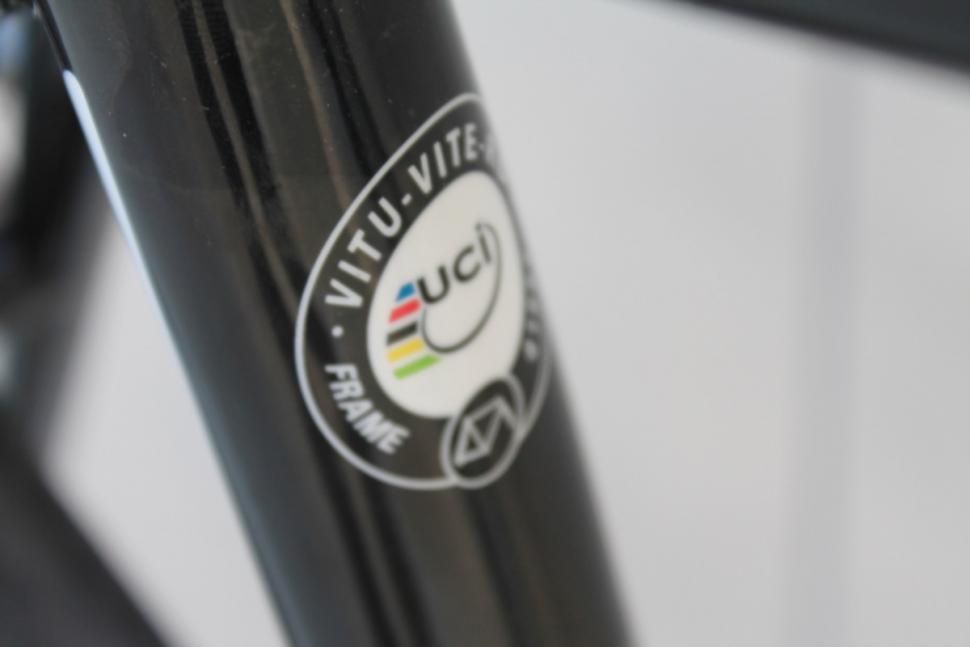 That’s not an extreme geometry, but it’s certainly race-focussed. I had a 10mm spacer underneath the stem, and the front end felt about right for me. You’re in a position that means business. 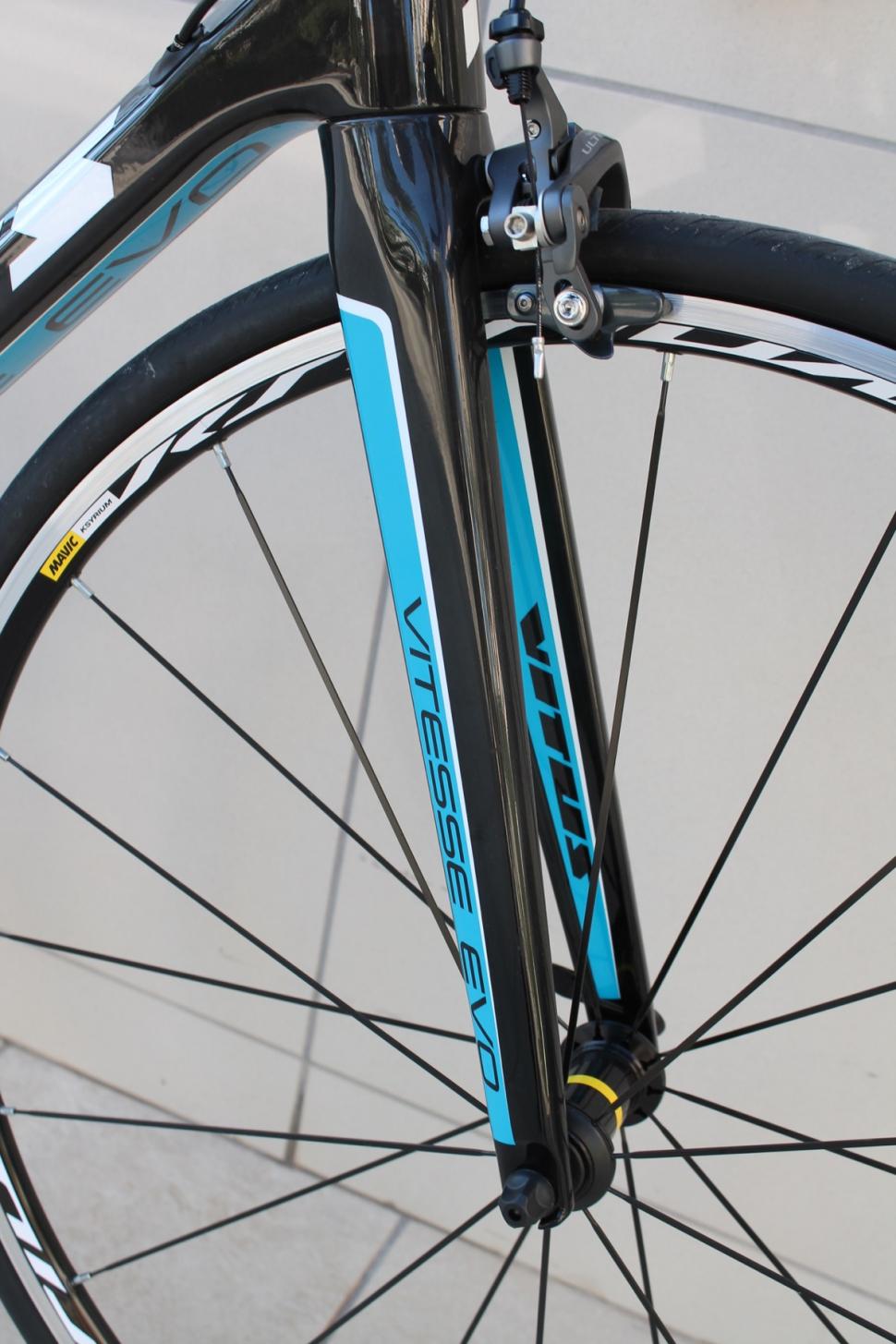 The frame is made from T700 and T800 unidirectional carbon-fibre. Like a lot of performance-minded bikes these days, the Vitesse Evo has a humongous bottom bracket area, BB386EVO standard. That’s the heart of the frame. The profile of the down tube that extends away from it varies along its length, but that too is a mighty piece of work – boxy and wide, the sort of down tube with which you wouldn’t want to pick a fight.

The bottom bracket stays doggedly in place when you get busy on the pedals, providing a substantial launchpad for your power. It’s reassuring that when you stand up on the pedals the BB of this bike behaves pretty much the same as when you’re seated, exactly as you’d hope it would. 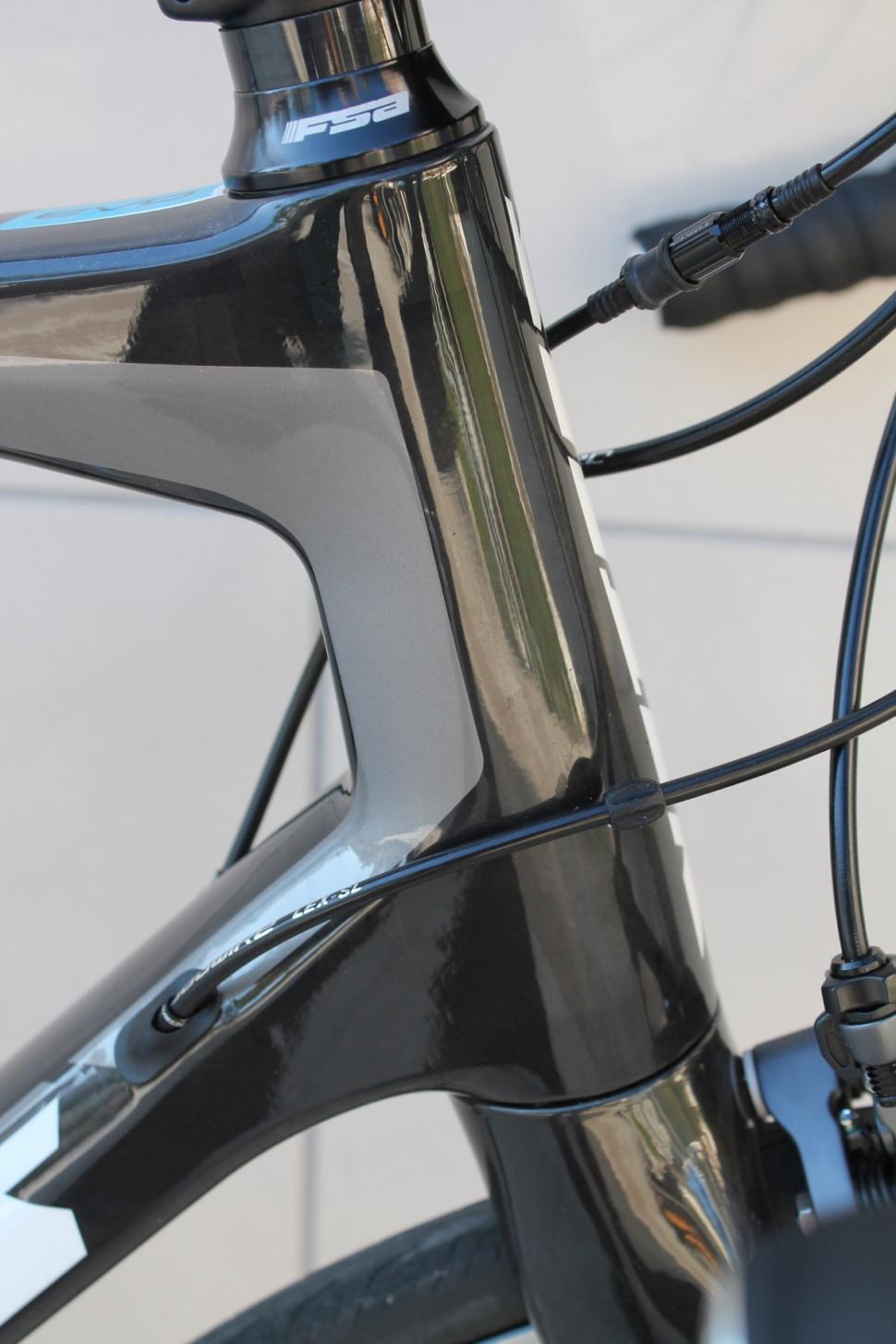 The head tube houses a 1 1/8in bearing at the top and broadens out to take a 1 1/2in lower bearing. Combined with the T700 full-carbon fork, it provides confidence-inspiring steering. Swooping and diving through hairpins – or any other tight corner, come to that – is a whole lot of fun. Even taking them fast enough for the tyres to squeak on dry roads, you don’t lose faith in that front end. 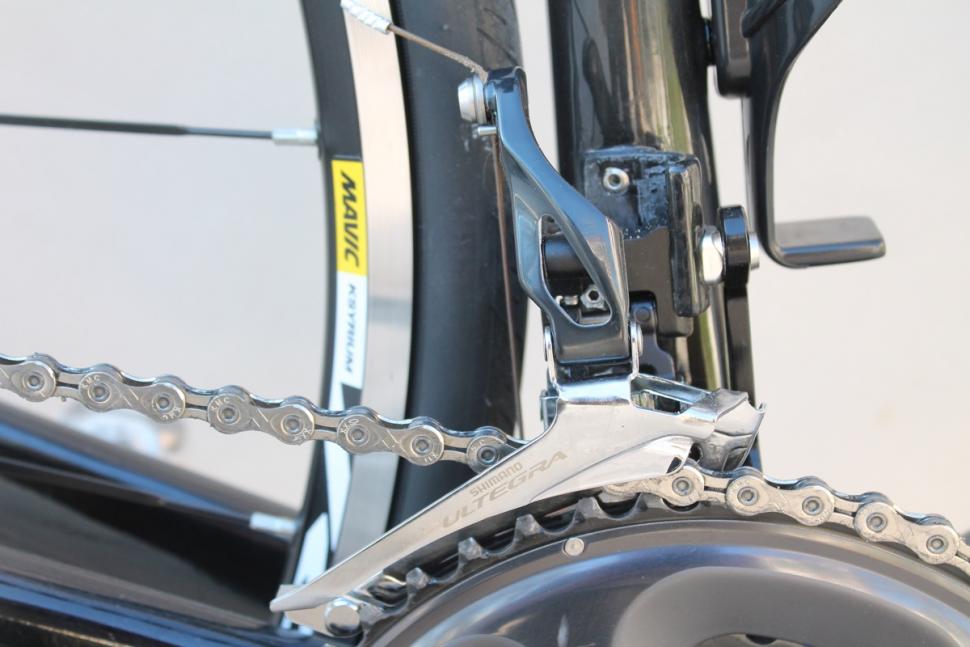 You can get a lighter bike than the Vitesse Evo if you’re prepared to increase your outlay, of course, but for this kind of money it accelerates and climbs very well, providing a good return on the effort you invest. You can dart about from wheel to wheel on the hills without the need to overcome much inertia. It’s an action-loving character. My complete bike came in at 7.72kg (17.02lb), according to our scales (including bottle cages but not including pedals). Vitus says the unpainted 54cm frame is 840g and that the AN Post Chain Reaction team has a full bike at about the UCI minimum bike weight limit of 6.8kg (15lb) with top-level components. Mine is the cheapest version of the Vitus Vitesse Evo with a Shimano Ultegra groupset, Mavic Ksyrium wheels (an upgrade over last year's Fulcrums), and a handlebar, stem and seatpost made from 6061 aluminium. There’s scope for saving some weight there later on, if that’s something that appeals to you. 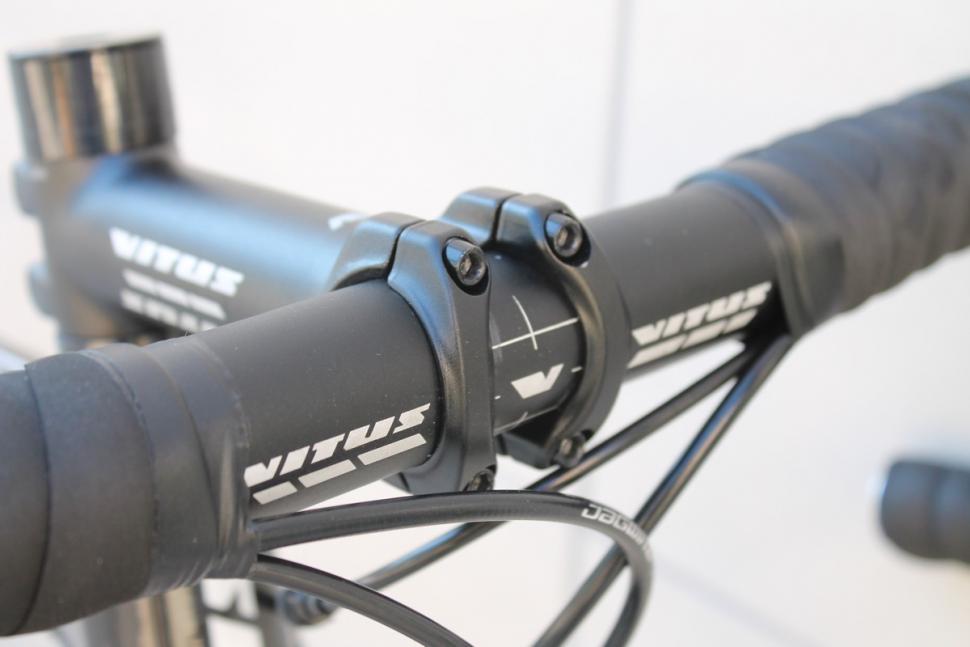 The Vitesse Evo VRI (£2,449.99 at RRP, actually £2,199.99 on Chain Reaction Cycles) comes with Shimano Ultegra too, but this time in its Di2 electronic guise, and it has a carbon-fibre FSA SL-K seatpost. 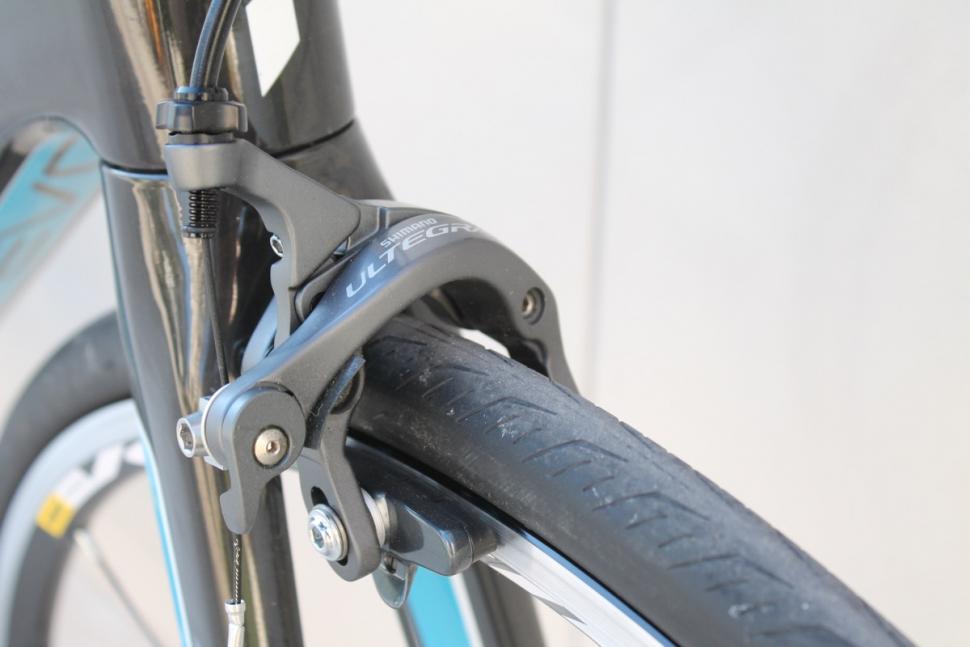 All three really are killer value. I mean, a pro level frameset, Ultegra groupset and Ksyrium wheels for just over £1,700? That’s ridiculous. What’s the catch? Comfort? Well, no, actually. I can only base this on my one ride, but the slim 27.2mm seatpost, Prologo Scratch 2 saddle and 25mm Mavic Yksion Elite tyres (Vitus uses 25s across the range now) treated me very well. I’d have no trepidation heading out for a big all-dayer on this bike. 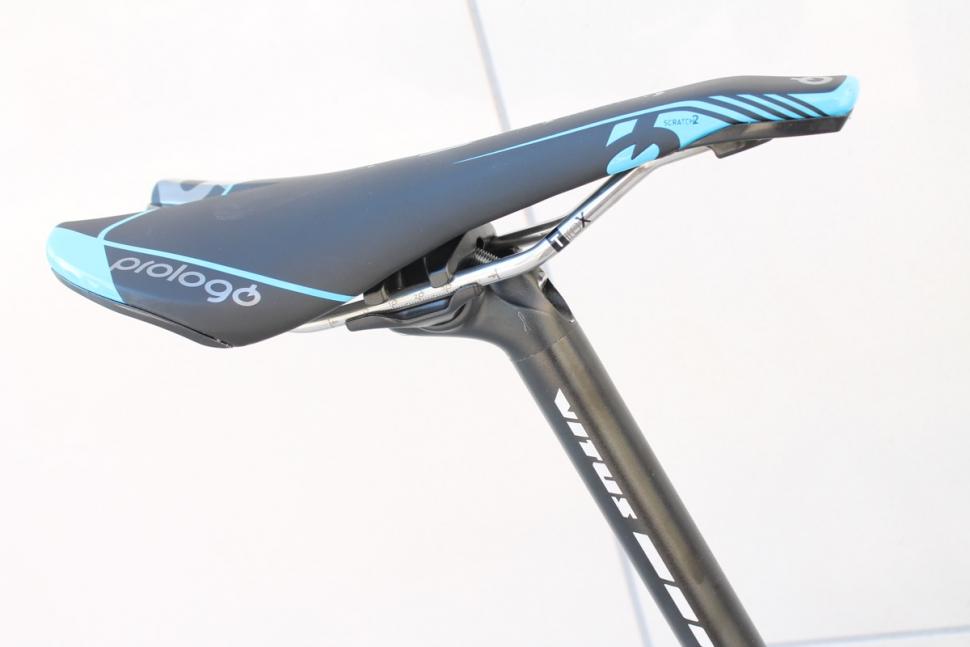 I’m in Calpe for another couple of days (I'm gutted, as you can imagine; would it help if I told you that the food is rubbish? It’s not, actually, but I could tell you that), so expect more First Rides on Vitus bikes on road.cc soon.