What's this landing with a thud on the doormat of road.cc towers? Only a set of the new 105 hydraulic/mechanical shifters and flat-mount brake callipers. Woo-hoo!

It was April when Shimano told us that their hydraulic disc tech was going to trickle down to 105 level, and we've been waiting half the year, but the levers are appearing on bikes now and the flat-mount callipers are in stock too. What we have is a full set of front and rear shifters and disc callipers, along with necessary pads, cables and hoses. It's a package that has an RRP of £399. 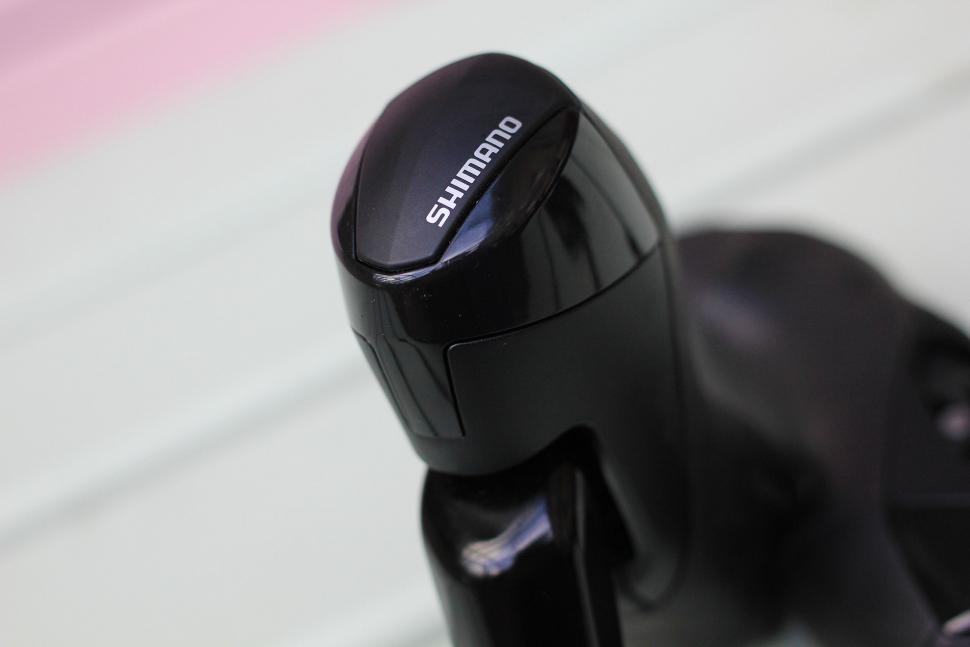 > Read our guide to Shimano groupsets

The lever shape looks quite different to the Ultegra-level hydraulic/mechanical shifters, but actually the section you'd normally be gripping when you're riding on the hoods is very similar. The top of the lever is flatter: the lever pivots from a different place and there's some re-arranging of the internals too. 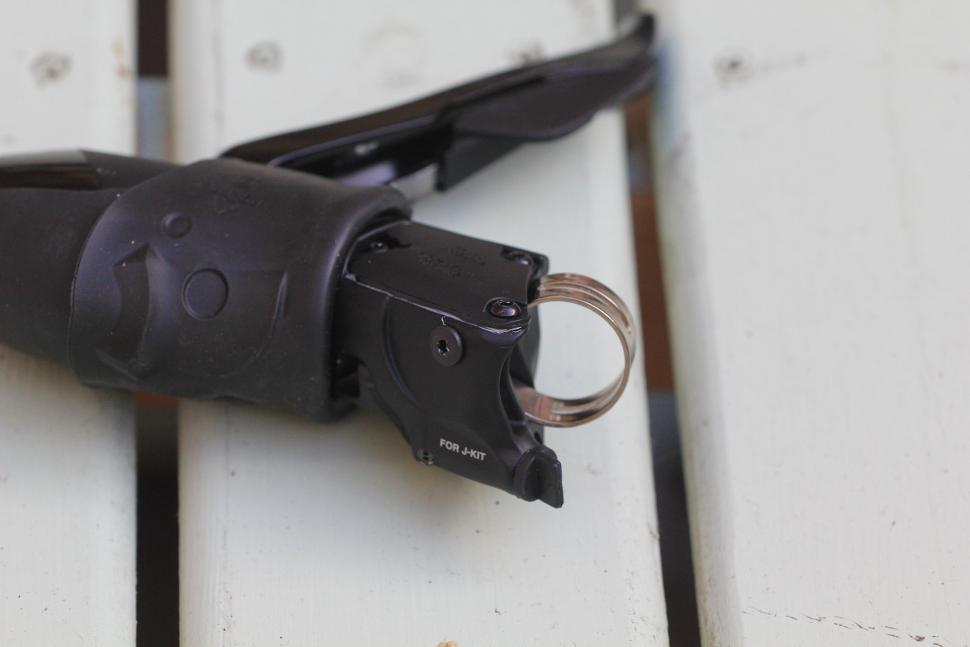 With the original 785 Di2 hydraulic levers and the Ultegra-level 685 mechanical levers you had to peel back the rubber cover on the top of the hood to expose the bleed valve, and it was a bit of a faff getting it to sit back in place once you were done, especially on the Di2 ones. For the 505 levers the bleed port has moved to the base of the lever so you can just roll the rubber up a bit like you do when you're fitting them anyway. Shimano suggest accessing the recessed clamp bolt from the top of the hood but actually you can reach it from the bottom as well. Just. It's that little hole bottom left. 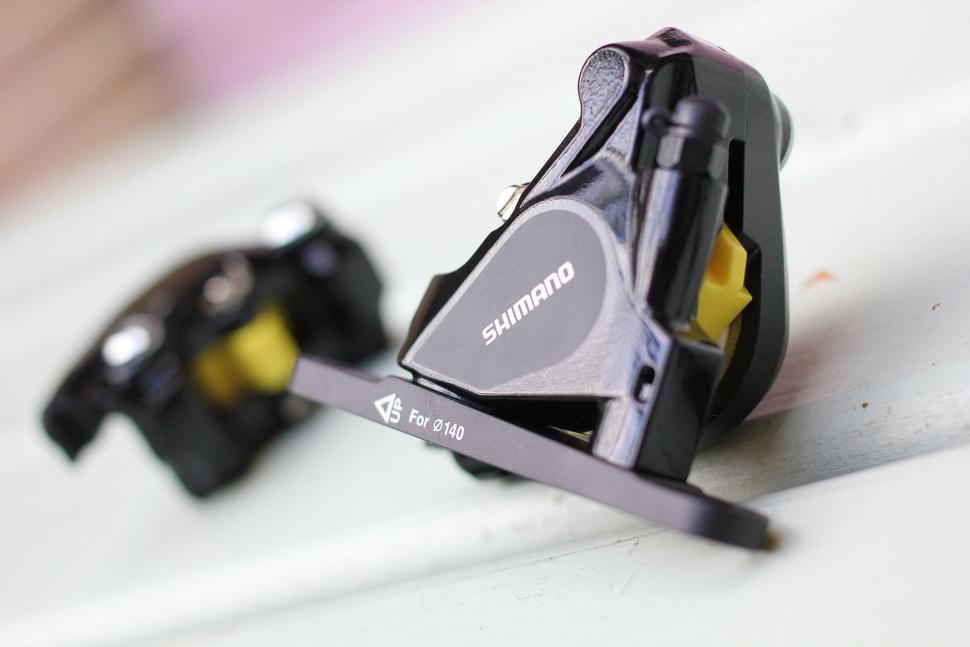 The callipers are more compact than the post mount ones and they come with Ice-Tech resin pads with heat-sink fins to help with cooling. The front brake has a reversible plate that allows you to run either a 160mm or 140mm rotor at the front. the rear flat mount calliper bolts directly through the frame if you're running a 140mm rotor; if you want a 160mm at the back you need an extra plate between the calliper and the chainstay. 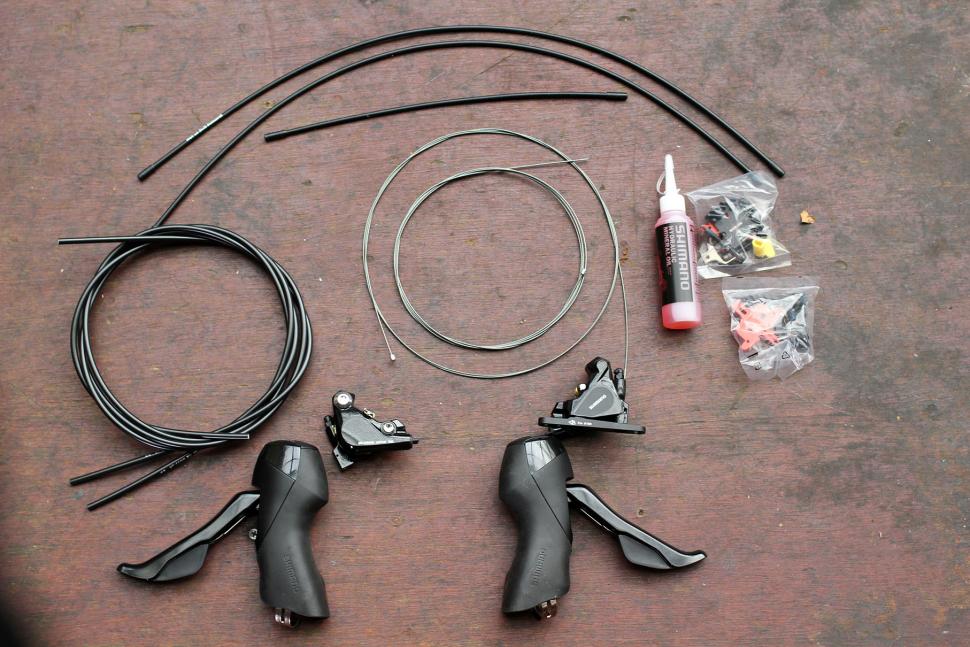 The kit comes with all the cables, outer, hose, mineral oil and olives that you need to fully set up the brakes on your bike. You don't get derailleurs, of course. We've bunged all the bits on the road.cc scales of truth and they say the following:

There's two bottles of oil included, so assuming you use both of them and all of the cable outer and hose, that's a full system weight of 1170g, excluding rotors. In reality you won't need all the oil and you'll be chopping bits of the cables and outers off, so it'll likely be an install weight of 100g or so less. When we tested the Shimano 105 5800 groupset we weighted the levers, cables and brakes at 1,000g. So the hydraulics will be around 200g heavier once the rotors are taken into account.

We'll be fitting these brakes to the new flat-mount-friendly Kinesis 4S Disc frame soon, so watch out for a full review in due course.