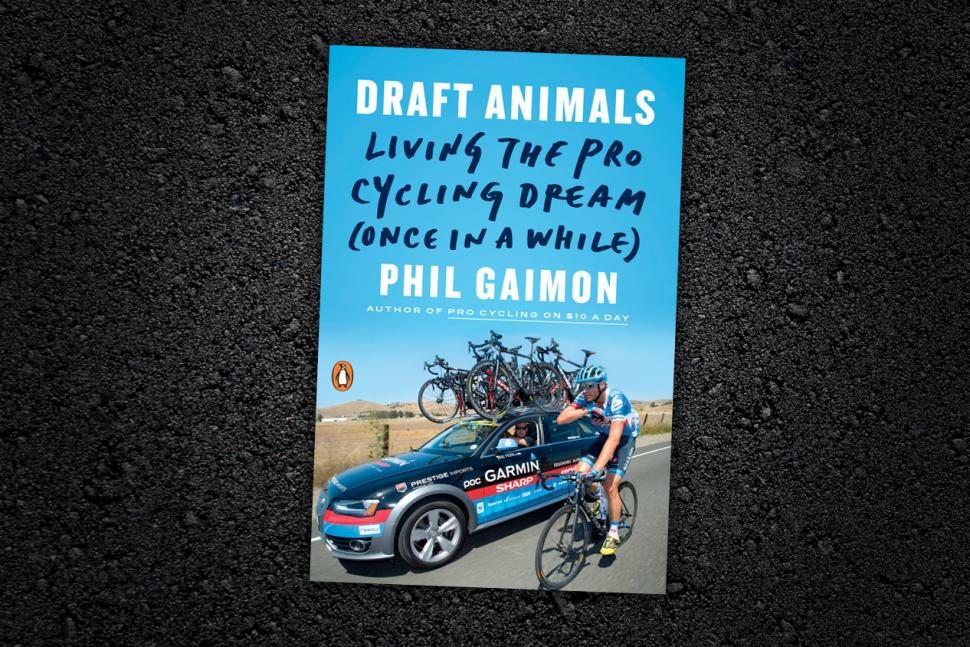 Draft Animals - Living the Pro Cycling Dream (Once in a While)

8
10
Honest and engaging account of one rider's life at (or near) the top of the sport
Weight:
293g
Contact:
www.penguinrandomhouse.com
How we test

I enjoyed reading Draft Animals. It's a colourful and personal take on life in the professional peloton, and Phil Gaimon writes with an easy and honest style. If you take one thing away from the book, it's that nothing's really black and white: some people cheat at sport and are otherwise genuine and pleasant human beings, some people are completely righteous in their attitude to fair sport and inscrutable in their personal and business relationships, and the resulting mess is hard to navigate.

To be stuck in the middle of all that with no job security and a minimum wage, you have to love what you do. It's clear that Gaimon does love the riding and racing, but struggles with his place in it, and he's honest about his professional and personal failings. And other people's.

Gaimon's journey from fat teenager sitting on the sofa to a professional contract is covered in his first book, Pro Cycling on $10 a Day. This book gives an overview of that time but really concerns Gaimon's time moving between the US continental and European pro scenes, at a time when the sport was struggling to recover from repeated doping scandals, from Operación Puerto to Lance Armstrong.

With major sponsors moving their money elsewhere, and many riders tainted by the scandals, Gaimon's time in the professional peloton (the book mostly covers 2012–2016) coincides with shrinking budgets and teams folding and merging. Those factors don't make for a healthy labour market: the title refers to Oregon Trail, a computer game Gaimon played as a child.

'In the game you'd purchase 'draft animals', like oxen or horses, to pull your covered wagons,' he explains. 'You could sell them or trade them, but more often you'd just use them up and buy a new one when they died.'

That was – and is – the reality for most riders, even at the highest levels of the sport. At one point a coach tells Gaimon to stop hitting the gym, which he had been doing to to build bone density to ward off osteoporosis, a common problem for pro cyclists. His long term health, he is told, will have to take a back seat.

Gaimon plays down his palmarés in the book, and casts himself as a bit of a makeweight when he finally steps up to the WorldTour with a $50k (at the time the WorldTour minumum wage) contract with Jonathan Vaughters' Garmin-Sharp but he's clearly riding at a decent level, finishing second overall in the Tour de San Luis behind Nairo Quintana after winning the first stage, his WorldTour debut.

Gaimon's time at Garmin coincides with that of Tom Danielson. Gaimon recounts how at a 2012 charity event, angry at Danielson for his cheating, he tried to 'rip that doper's legs off' only for Danielson to tell him that he was impressed, and offer to train with him. In the end, Danielson's recommendation to Vaughters was a key part of Gaimon securing a contract with Garmin-Sharp.

The relationship between Gaimon and Danielson doesn't fill huge amounts of the book, but it does feel like a central theme. The two become friends, and it's Danielson's work on the climbs later in the race that pulls Gaimon to that second place in San Luis. There's lots of hugging and crying at that point.

Danielson's second positive, for testosterone in 2015, hits Gaimon hard and it's clear that he doesn't know how to process it: after a decade of riders saying it's a mistake, that explanation is pretty tainted, after all. The relationship between an ex-doper and a rider with a 'CLEAN' tattoo on his arm is a complex one; at one point Gaimon's coach tells him, 'if you can't be friends with dopers you might as well quit.'

It's a pity that the book is receiving most of its attention for Gaimon's opinion that Fabian Cancellara 'probably did have a motor' when he won the 2008 Milan-San Remo: a claim that may or may not see it removed from the shelves, or at least altered. It's nothing more than a throwaway comment in the grand scheme of the book, which would have been none the poorer without it, and it sits at odds with the other issues of cheating that are more widely discussed in the book. In other cases – Tom Danielson's second positive, for example – Gaimon has first-hand testimony to add, and most of the other stuff in the book concerning cheating is now a matter of public record.

> 22 books every cyclist should have on their shelves

There are many other strands to the book. Gaimon's struggle with the power structures of the sport is another theme. The machinations of agents, managers, coaches, riders and sponsors make the WorldTour seem like a very opaque place to work at times. Gaimon's social media following is a double-edged sword, making him attractive to the team in terms of social reach but also meaning he's of more value at times at sponsor events than he is at races. The start of Michael Woods' career is a fascinating sideline, and there's loads more: racist massages, Dave Zabriskie's Renault Laguna, demanding Belgian 'pedalphile' fans, and, of course, cookies.

Overall it's an engaging read, simply and honestly written with plenty of colour. It doesn't feel stage managed and it comes across as a genuine, warts-and-all account. Gaimon paints himself in a pretty neutral light, transfixed by the circus of the WorldTour while at the same time disillusioned by the many ways in which it falls short of his expectations.

From the outside it looks glamorous, but most of us don't see the graft: the endless training, the minor races when you're passed over for the WorldTour events, the agents shafting one of their riders to secure a contract for another. At one point, dropped in a nothing race in the rain and sitting in a YMCA waiting for the team to arrive, Gaimon finds himself the object of the junior riders' attention. 'That's right kids: if everything goes well, in ten years you can be like me, right here where you already are, except without dry clothes to change into or your parents to give you a hug and a ride home.'

It's still their dream though.

Make and model: Draft Animals: Living the Pro Cycling Dream (Once in a While)

From the author of the cult favorite Pro Cycling on $10 a Day and Ask a Pro, the story of one man's quest to realize his childhood dream, and what happened when he actually did it.

Like countless other kids, Phil Gaimon grew up dreaming of being a professional athlete. But unlike countless other kids, he actually pulled it off. After years of amateur races, hard training, living out of a suitcase, and never taking 'no' for an answer, he finally achieved his goal and signed a contract to race professionally on one of the best teams in the world.

Now, Gaimon pulls back the curtain on the WorldTour, cycling's highest level. He takes readers along for his seasons in Europe, covering everything from rabid, water-bottle-stealing Belgian fans, to contract renewals, to riding in poisonous smog, to making friends in a sport plagued by doping. Draft Animals reveals a story as much about bike racing as it is about the never-ending ladder of achieving goals, failure, and finding happiness if you land somewhere in-between.

Draft Animals: Living the Pro Cycling Dream (Once in a While)

Would you consider buying the product? I did already.

It's a very good read.