8
10
A picture-rich review of highlights from the career of one of the peloton's most popular and successful riders
Weight:
1,250g
Contact:
www.bloomsbury.com
How we test

Some riders divide opinion or court controversy; others seem to engender near-universal support and respect. I would suggest that Fabian Cancellara falls into the latter group, which should provide a ready audience for this 'fully authorised celebration of renowned cyclist Fabian Cancellara'.

The book is appearing shortly after his retirement, and rather than providing a full biography it 'features 20 key career moments' (although the publicity material actually claims that there are 25). It is likely that your own favourite will be among them: for me it was his winning the gold medal in the time trial at last year's Olympic Games, and I doubt that many will begrudge him ending his career on such a high. Each of the chosen moments is illustrated with copious photographs, mostly from one of the agencies; while I recognise many of them, we are promised that others are 'never-before-published'. 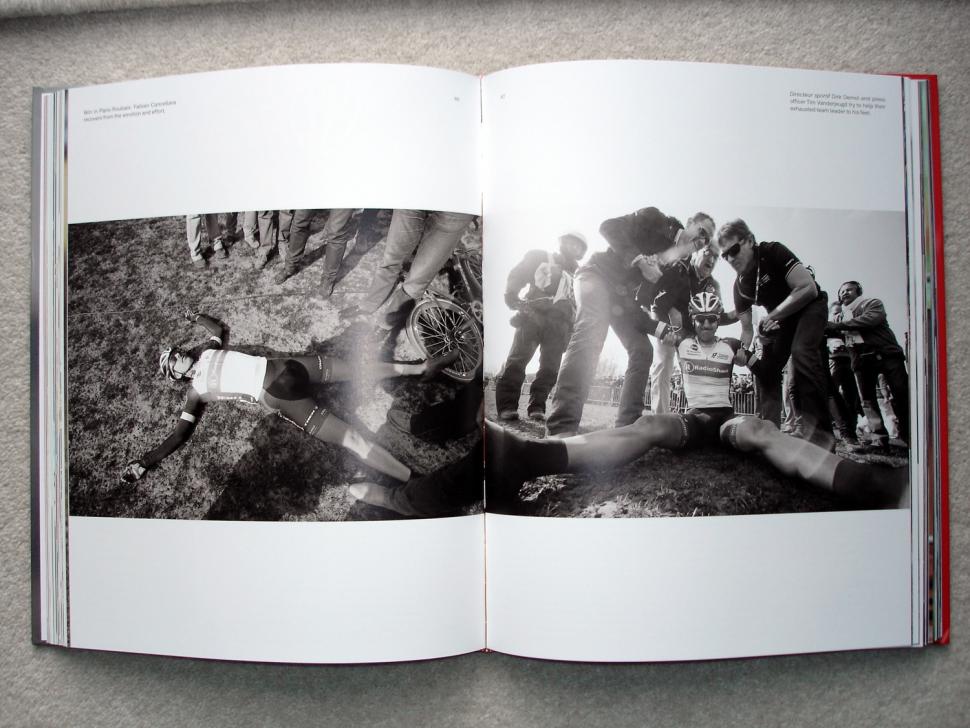 Sports journalist Guy van den Langenbergh has written a page or two about each of the chosen 'moments', featuring extensive quotes from Cancellara himself. I would call them 'themes' more than 'moments', and one such is his 'Love-hate relationship with the Tour de France'. As a rider whose opinion is generally respected, it is refreshing that Cancellara is prepared to be critical of Tour organiser ASO: "I recognise the importance of the ASO for cycling. But the ASO is too controlling ... you can't negotiate or discuss with the Tour."

It appears that he did not wait until after retirement to voice such an opinion, as we are told that "in all these years, I've never been officially invited to the presentation of the Tour route. Despite the fact that, with my 29 yellow jerseys, I have meant something to the history of the Tour". Could there be a connection? As in other walks of life, some cyclists become equally well known by a nickname – in this case Spartacus. Few nicknames are so appropriate: as Cancellara explains: "My former teammate Roberto Petito gave me that name. As far as he was concerned I was half Italian, and with my broad shoulders and style of riding he thought I looked like a gladiator."

I wasn't expecting to find much criticism of Cancellara in the book, but at times the adulation is bordering on the sycophantic; nowhere is this more evident than with the rather fawning introduction by Marco Pastonesi. "Sometimes he has won even when he came in second, or third, or 40th place. Because who would dare to claim that only the rider who finishes in first place is the winner?" Really? The accusations that he used an electric motor to win the Tour of Flanders in 2010 are covered briefly, but add little to what we already know. As this article shows, hidden motors remain a hot topic, so as one of the first and better-known riders to face such accusations Cancellara's name is still being mentioned – just not in the way he would have hoped.

The book was originally written for a Belgian audience, and was first published last year. It has now been translated into English by Rebekah Wilson, and makes a fitting 'official goodbye to his fans", who will relish the book.

Curated and with commentary by Cancellara himself, this is a richly illustrated book showcasing the best photographs from throughout his career.

Cancellara is one of the greatest cyclists of the last decade – he conquered the hearts of many cycle fans around the world. 2016, his last year as a professional cyclist, has seen him win gold in the Olympic men's individual time trial and, such is his status in world cycling, the Tour de France was rerouted in his honour athrough his home town in Switzerland.

Featuring 25 key career moments, chosen and described by Fabian, this is a very personal and highly illuminating book.

This is the official 'goodbye' to his fans and celebrate the key moments of his marvellous career.

There are only modest discounts available at present, but expect to see better deals at some point.

It is a 'feel good' book: good stories, great pictures, and a popular rider.

It reminds me of speeches at a funeral, where only good things are said.

Did you enjoy using the product? Yes: sufficient new information and pictures to be genuinely interesting.

Designed for fans of Spartacus, but still of interest to all fans of the sport.