9
10
A great combination of photographs of well-known mountains with short essays from well-known cyclists
Weight:
1,760g
Contact:
www.thamesandhudson.com
How we test

I always hesitate to class someone's work as a 'coffee table book', as it may not always be taken as a compliment; however, since the author himself, Michael Blann, refers to Mountains: Epic Cycling Climbs as that (albeit as a 'luxury' one), I feel empowered. To qualify, a book usually needs to include lots of large high quality pictures, and in that respect Mountains delivers. However, in my experience some coffee table books give the genre a bad name by offering little else, with no reading material of any substance – and that is where Mountains sets itself apart, with several well-known professional cyclists contributing short essays to the book.

Essentially, we have a book of two parts, with the first being numerous photographs of mountains that many cyclists will be familiar with. As you might expect, several well-known climbs made famous by the major Grand Tours are included, so the Alps, Pyrenees, and Dolomites feature heavily.

However, this book is not just about the mountains that are used for WorldTour races, but also those that are significant to cyclists for other reasons – such as Mount Teide in Tenerife, or Sa Calobra in Majorca. The emphasis is very much on the mountain, and to a lesser extent the road that goes up it, and so in many of the pictures there is little evidence of a cyclist, let alone a cycle race. 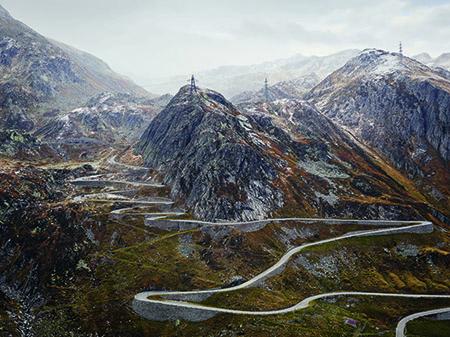 You might not recognise the name of photographer/author Michael Blann, but you will almost certainly have seen his work before. Take a look here to see some of the pictures he has produced for cycling brands and you can read this informative piece about the effort that went into creating one of Shimano's more memorable adverts.

A central theme of the book is to show the scale and permanence of the mountains, and to contrast this with the relative insignificance of cyclists during our fleeting visits – even if the ascent feels far from fleeting at the time. As Blann says, 'The mountains provide a platform on which to create history, and in return the racing and Grand Tours give significance back to the mountain. It's what draws us to the mountains to follow in the footsteps of our heroes.' To help capture that feeling Blann does like to be positioned well back from the subject. Some of the climbs have the instantly recognisable signature shot (such as Mont Ventoux, below), but as this short film demonstrates, Blann also spends quite a lot of time walking away from the action to achieve his preferred perspective.

He also makes occasional use of a helicopter to achieve the sort of shot that is beyond most of us, even if equipped with a drone. 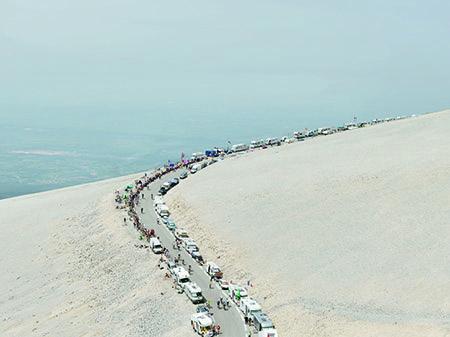 The majority of the images are in colour, but there are a few 'moodier' shots in black and white. Some of the images look like an exquisite oil painting to me: I don't know if that will be taken as a compliment by all photographers, but I like them. You won't find technical information about the photos in the book, so I have no idea about any of the camera equipment or settings required to achieve that result.

The second part of the book is the 30 pages written mainly by well-known cyclists. Some, like Robert Millar and Michael Barry, are now as well known for their writing as their riding; whatever their skills off the bike, editor Susannah Osborne has ensured a most readable result by them all.

I have read work by many of the contributors before, but Tao Geoghegan Hart was a new one for me. He may just be starting out on his first career, but from what I have read here he has a successful second career as a writer ahead of him if he wants it.

Sometimes the essay relates to a particular climb or race, and sometimes to climbing or riding in general. You would expect Andy Hampsten to focus on 'that stage' of the 1988 Giro d'Italia, and it is always worth hearing about it again. Even though he didn't win the stage, it set him up for a memorable overall win.

Even the weaker climbers have a story to tell: Bernie Eisel gives some practical advice for descending, which is where those trying to avoid elimination in the 'bus' often try to make up time. 'If you see a bend and there's no guardrail, it's a sign that if you go over it will hurt, but it's not likely to be a cliff or massive drop... If there is a guardrail and you're going too fast, you have to lay the bike down before you hit the rail... It's bad news. That's why you try to crash first.' Not a decision that any of us want to make, or indeed are likely to be able to take in the heat of the moment.

Blann himself describes his time as a spectator on the Col de l'Iseran during the 1992 Tour, where 'at the time I felt cheated – the wait seemed disproportionate compared to the few glimpses I'd had of the riders', which is a feeling that many of us have experienced at some time. As he later came to appreciate, 'the cycle race is a travelling circus that visits for the day and then is gone, leaving the mountain, the constant, behind'.

Any of the essays would be right at home in a high-end cycling magazine; indeed in some ways Mountains is a bit like a Rouleur Annual, but with a lot more to read. You could also consider it as a descendant of Graham Watson's seminal 'Landscapes of Cycling' book.

A landscape and photography book of Europe's most majestic mountains and historic cycling climbs for the growing audience of enthusiasts and participants around the world.

The mountains of Europe have many different meanings to many different people. For the locals they are a way of life; for visitors they represent breathtaking beauty, active holidays and peaceful moments. For cyclists, however, the dramatic landscapes mean something quite different: suffering, pain, agony – and glory. From the Ardennes to the Alps, for over a century the mountains have provided the setting for the greatest cycling contests, where human determination and willpower can triumph over nature and opposition.

In recent years, the mountains of Europe have become the primary destination for urban riders who want to challenge themselves, experience the storied roads and escape their everyday lives. This publication is aimed at all who wish to be inspired by those challenges or celebrate those personal victories.

A reference section includes locator maps and climb profiles. With personal recollections from leading road-racing cyclists, photographs and words coalesce into a visual depiction that transcends any single perspective and will evoke awe and wonder in anyone who wishes to confront the power of the mountains.

Quite a high price, with no attractive deals available, but you do get a lot of book for your money.

Reading the work from some riders that one does not often see in print.

Did you enjoy using the product? Yes: it rewards repeated viewings.

Both aspects of the book are very good, and complement each other well.